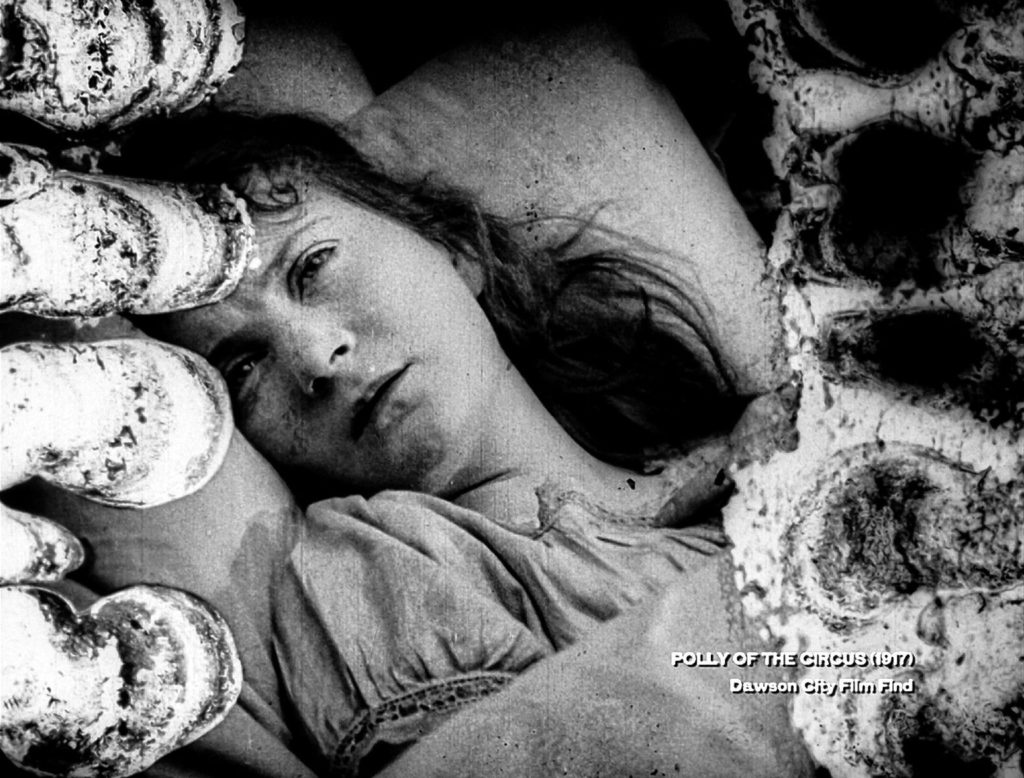 Many years ago, I found myself deep in the basement of the old Pleasant Street Theater (now the location of McLadden’s pub in Northampton), cleaning out some old storage lockers. From one of them, I pulled out a dented, dusty, film can, a flat circle of metal about 15 inches across and an inch or so deep. On its side was a peeling piece of yellowed masking tape with a single, suggestive word scrawled across it in marker: “Throat.”

Imagine that feeling multiplied a thousandfold, and you’ll have a sense of what film lovers feel about the Dawson City Collection, a treasure trove of over 500 nitrate prints from the early 1900s Canadian Yukon. It was lost for 50 years before being discovered in 1978 when a construction crew found them buried in a subterranean swimming pool beneath an old hockey rink. Director Bill Morrison’s (Decasia) film Dawson City: Frozen Time, playing Thursday at RealArtWays just down 91 South in Hartford, tells the fascinating story of the discovery.

It is largely a quirk of geography that helped build the Dawson collection. Located just south of the Arctic Circle, the gold rush town was the last stop on the film distribution route; films that made it to Dawson rarely made a return trip. And the climate of the region meant that the permafrost helped create a kind of natural stability that kept the films — once a local bank employee had buried them to free up some storage space — intact for decades.

To help tell the story, Morrison pulls in Sigur Rós collaborator and composer Alex Somers, whose enigmatic music underscores both the elemental nature of the landscape and the sense of stepping out of time that comes with uncovering moving pictures previously thought lost forever.

But make no mistake. This is not just — or even primarily — a film for film nuts (though there is a moment when Morrison seems to find a filmmaker who was doing the “Ken Burns effect” years before Burns was alive). Instead, it is a gut-punch reminder that we are one small blip in the ongoing experiment of humankind, connected to both past and future in ways that are sometimes left for new generations to uncover.

“Escape From New York” in Amherst

Also this week: Two other films from years past come to the screen at Amherst Cinema this week, beginning on Friday night with a 9:45 p.m. screening of John Carpenter’s 1981 dystopian action pic Escape From New York. It stars Kurt Russell as Snake Plissken, an ex-special forces soldier who has turned to a life of crime in an era where the entire island of Manhattan has been turned into an enormous prison complex. When Air Force One is hijacked and brought down on the island, Plissken is sent in to save the president in exchange for his freedom. Also at Amherst is the music documentary Monterey Pop, from D.A. Pennebaker (who made the excellent Dylan doc Don’t Look Back). Screening on Wednesday evening, the film covers the iconic 1967 festival in inimitable style, catching Hendrix, Joplin, and others in moments that have since become legendary bits of our shared musical history.