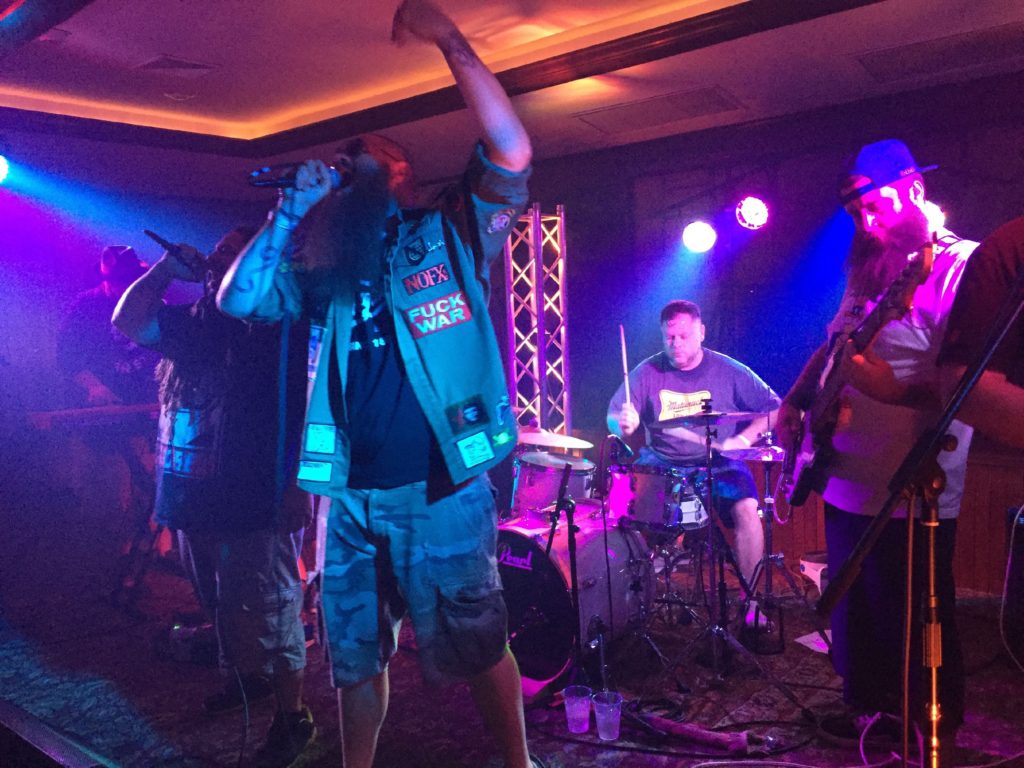 After drinking sangria and picking at BBQ all day at a bridal shower this weekend, I shrugged off the floral shackles of proper wedding etiquette and hit The Cove in Southwick for the first time.

Danny Pease and The Regulators put together a one-day summer bash at The Cove with bands playing throughout the day on the deck and moving the last two performances inside at night.

As I walked up the stairs to the packed deck, the lights from the party gave the brick building a nice glow. Opening the doors, I saw the stage behind a heady cloud of mist The Cove sprays to keep revelers cool. The lights were on and The Big Sway, a psychedelic jam band thrown into a blender with some seriously heavy punk rock, were getting ready to perform. I missed the outside sets, but was in time for the indoor action. I ordered a Stella Artois at the bar and the lights went off as Joe MacFadzen, The Big Sway’s bassist/singer urged everyone to come closer to the stage.

During the first song, guitarist/singer Tim Zucco busts a string in pure rock fashion and continues ripping out the rest of the song. MacFadzen, Zucco and drummer Mike Grenier are the offspring of Phish and Black Flag on speed. Their pure high-energy punctured the audience as we were engulfed in their funky rock. Fast-paced, heads bobbing, bodies swaying and a lot of “Yeah’s!!!” The Big Sway has just released an album, Ground Up, and were playing songs off it. I was disappointed to learn the venue didn’t have an ATM, otherwise I would have picked up a copy on vinyl.

Once The Big Sway’s set was done, the energy in the room was still electric. The lights came back on and I could overhear the enthusiasm and excitement of some of the audience that had never seen The Big Sway live before. But we were all gearing up for an encore set by Danny Pease and The Regulators, who played earlier that night, to close out the day of music.

The stage lights started pulsating, drawing everyone close to the stage again as DPR began. I caught a scent of incense in the room then that familiar, soothing bouncy sound of ska/reggae kicked in and the crowd began to dance to the grooves.

My attention to detail got lost inside singer Kenn Kosiba’s very patched up Army jacket. I spied Che, The Misfits, a FUCK WAR patch, a Jamaican flag, NOFX, and so much more. In between songs bassist Jake Curran played those familiar notes to “My Sharona,” which I still have in my head. I kept waiting for them to bust out a cover of it, with no such luck. They did however cover alternative ska rockers 311’s “Beautiful Disaster,” which was far from a disaster. Although DPR played for a solid 45 minutes, it was over in no time and left me craving more.