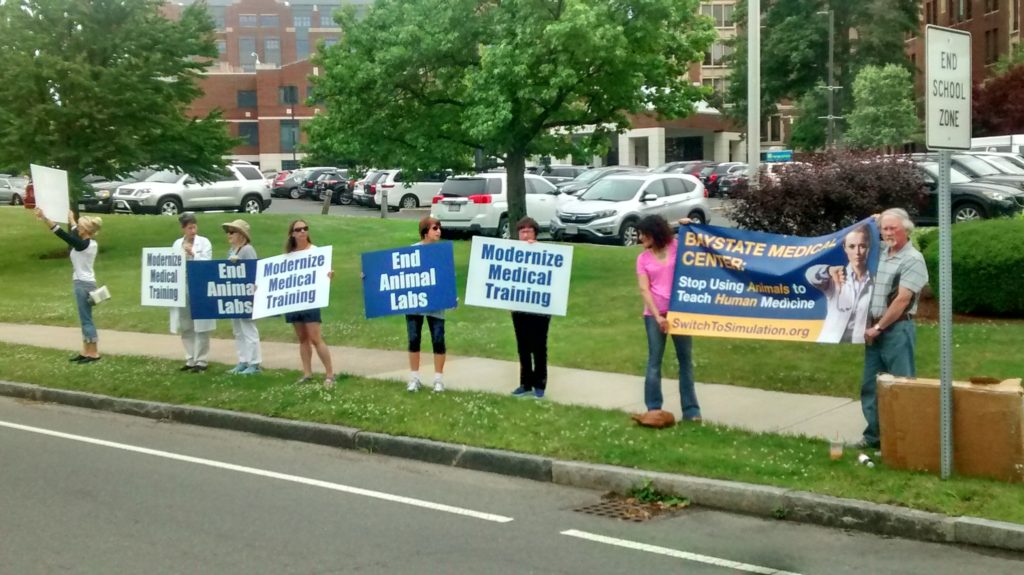 Over the last 20 years, medical education institutions across the nation have been phasing out the practicing of surgical procedures on live animals, but Baystate Medical Center in Springfield is bucking the trend and keeping it old school.

The protest on June 29 outside Baystate was organized by the Physicians Committee for Responsible Medicine to rail against the hospital’s practice of using live pigs to train the next generation of surgeons.

The Physicians Committee put out a survey of medical centers requesting information on whether they use live animals. Baystate was one of three medical educational facilities out of the 301 that responded to still practice this way, according to the committee.

While Baystate defended the medical center’s use of live-animals for surgical training as necessary, Ronald Gross, a Baystate trauma surgeon, disagreed that the hospital is one of just a few places that still uses this method of practice. It is more widespread than people will admit, he said.

Thursday’s protest included several area physicians, but none from Baystate. Leslie Dubinsky, an anesthesiologist with Holyoke Medical Center, who said she was “horrified” to discover Baystate’s practices.

“There’s no need to be murdering animals for this purpose,” Dubinsky said. “There are other methods that have been proving to be equally effective … I think a lot of people associated with Baystate don’t even know about this.”

The Physicians Committee, a national association of 12,000 physicians dedicated to promoting ethical research techniques and reporting, says there are 298 programs using non-living models for courses, including eight in Massachusetts such as Berkshire Medical Center in Pittsfield.

More than a dozen people stood outside Baystate on Chestnut Street in Springfield with signs that said: “End Animal Labs,” and “Modernize Medical Training.”

Gross, the trauma surgeon at Baystate Medical, said he disagrees with the Physician Committee’s stance and argued that “the sad reality” is that non-living human surgery models such as the artificial “TraumaMan System” are no substitute for performing surgery on a living creature that has blood pumping through its veins.

“The allegation of inhumane treatment of these animals are flat out lies,” said Gross who explained that the pigs are hooked up to an intravenous catheter and are given an anesthetic during surgeries. The animals are, however, euthanized post-surgery.

“There is no pain and no suffering,” he said.

Gross said that while it may appear Baystate is a standout in the medical community, most medical institutions that train surgeons do not release information about whether they use live animals for surgery. He was critical of the data released by the Physicians Committee.

Margaret Peppercorn, a retired pediatrician from Post Road Pediatrics in Sudbury who had a practice for 35 years, also attended the protest and said she was outraged about Baystate’s surgical training practices.

“Ninety-nine percent of all the training programs in the U.S. and Canada have gone over to using more human relevant simulators and other means and not using pigs,” Peppercorn said. “This is not only cruel and inhumane to the pigs, but I believe it’s substandard training. The American Academy of Science has said that the simulators are just as good. A pig is not a person. It’s not the same as working on a person. If I had an acute injury I’d want someone working on me that was trained on something more relevant to humans. We’re not training veterinarians.”

She said a pig’s skin is thicker than a human’s and its limbs are located in different areas of the body, which makes practicing surgery on a pig inadequate for training purposes.

The Physicians Committee also submitted a complaint about Baystate’s use of live animals for surgical training to the Animal and Plant Health Inspection Service, an agency within the United States Department of Agriculture that is responsible for protecting animal welfare. An email was sent to Elizabeth Goldentyer, eastern regional director of the Animal and Plant Health Inspection service, from medical practitioners associated with the Physicians Committee, including Peppercorn.