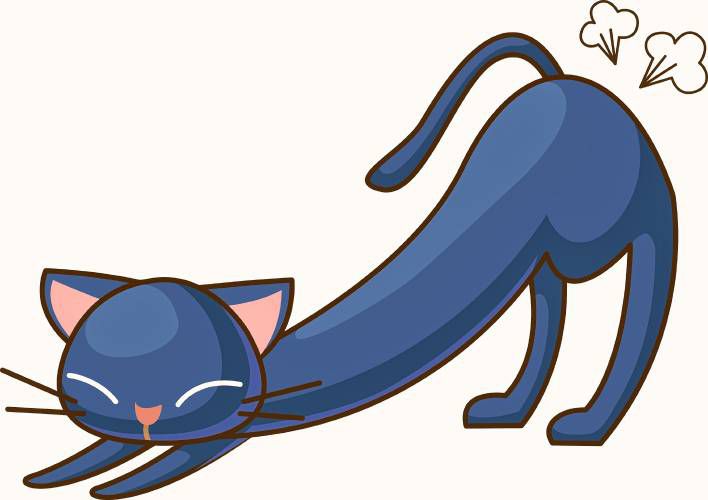 The view of cat stretched

Ah, farts. Can’t live with ’em and can’t live without passing ’em. When I started this column nearly two years ago, I knew that at some point I would have to broach the issue of passing gas in yoga class. It’s an endless point of fascination for folks who don’t do yoga in a class setting, and even some who do.

“What if I fart?” is a question I get all the time when I’m encouraging someone to try a yoga class for the first time. Or: “Do people fart in class?”

In my 10-plus years of taking yoga classes, I’ve so far managed not to fart audibly in any one of them. To be frank, mine aren’t really the noisy type. What that says about me, I don’t know.

Recently I went to a yoga class and someone passed gas loudly. Three times. At least I can only assume it was the same person all three times, gauging by the sound it made upon exit and the location it appeared to be coming from. The first time it happened, I could feel the room stiffen.

“Do they think it was me?” a voice in my head kept asking, despite my best efforts.

As soon as I’d forgotten about the first one, another came quacking out, long and exaggerated. By the third go-around I expected it. While we were sitting on the floor with our spread legs up in the air, the yoga instructor asked us to hold onto our legs and roll onto our backs, a pose that ends with legs flipped over face. And out came a few sputters as our butts greeted the ceiling.

Cue the awkward side-eyed glances as we all tried to identify the source while trying to hide the fact we cared enough to look. Because in yoga, the goal is to not care. The goal is to Zen out on the meditative movements of the moment without heed for typical social niceties.

It’s a worthy goal, and here’s why. Flatulence is a normal and natural part of the digestive system, and many yoga poses are designed to inspire movement throughout the body — bowels included. So, people should be letting go of their excess gases in class. In fact, yoga teachers should take it as a compliment, and fellow students should take it as a sign they’re in a good class.

Still, it’s hard to do. We don’t go around letting our gases fly all willy-nilly in other situations. Farts can be stinky. But yoga is all about letting go of what’s weighing us down, tuning into our body and giving it what it needs.

Plus, the odor of human flatulence, according to recent research, is actually good for you. A 2014 study published in the UK Royal Society of Chemistry’s scientific journal, MedChemComm found that small doses of hydrogen sulfide gas, found in rotten eggs and human flatulence, can safeguard cellular mitochondria. This could mean protection from stroke, arthritis and heart disease. May that nugget of knowledge aid you in your quest.

The aforementioned experience aside, I’d say audible flatulence in class is an uncommon occurrence. But maybe that should change. Maybe we’re all being too polite, however subconsciously, which means we’re clenching our lower muscles and therefore not getting the most we can from the class. Maybe the desire to identify the source of a toot has more to do with the fact that we’re jealous of the person for being laid back enough to let one fly.

So, the next time someone farts in class, instead of inwardly squirming remember to say namaste.

It appears yoga mogul Bikram Choudhury’s treatment of women is finally catching up to him after a judge issued a warrant for his arrest last week.

Several women say he raped and sexually assaulted them — allegations that resulted in a $6.8 million judgment. The Associated Press reports that despite his wealth, he has not paid any of the ordered amount since the court decision last year, hence the arrest warrant.

Choudhury famously responded to accusations of rape and assault by claiming he is so adored by women he would never need to rape or assault one, that he always has women clamoring all over him.

The scandals resulted in a rash of separations, as Bikram-affiliated locations around the country instead clamored to distance themselves from the consequences of the mogul’s actions. The former Bikram in Northampton rebranded as Valley Hot Yoga for that reason.