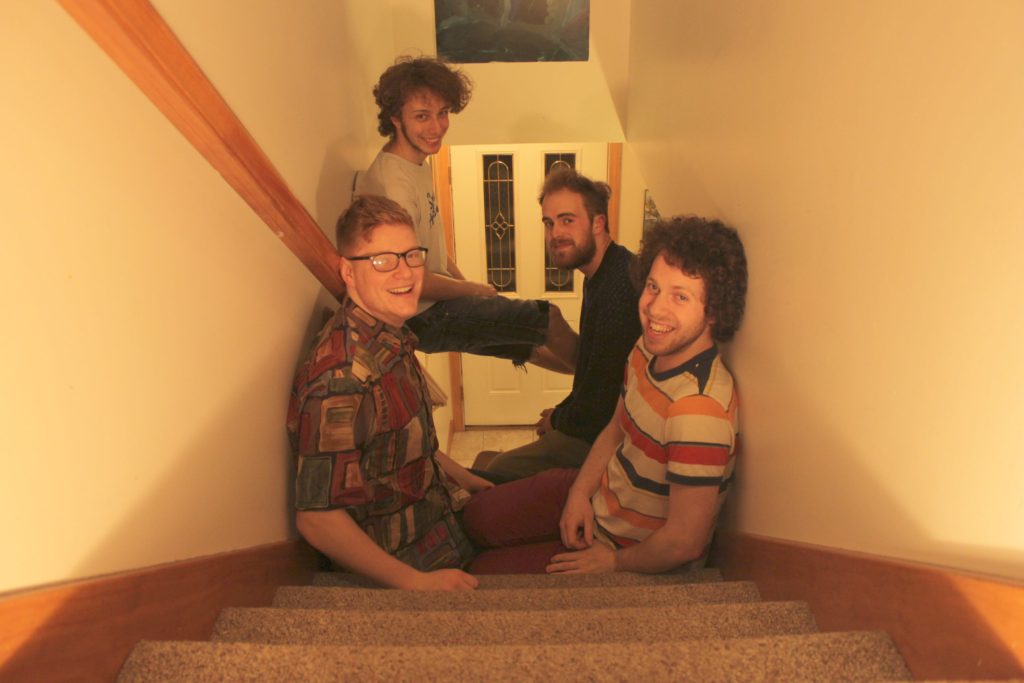 Tundrastomper, an explosive, chaotic, and notey rock band, formed about 10 years ago when Skyler Lloyd, Sam Brivic, Andrew Jones, and Max Goldstein were teenagers — about 13 years old each. They grew up in a town in Westchester, New York, called Ardsley. I looked it up on Google Maps and, well, it is what you might expect for New York City suburbs: the green space is evenly split between golf clubs and public parks, and the houses (perhaps the people, too) were mass produced in the ’60s. They even have a curling club.

The point of bringing all of this up is to say: There isn’t much to do there (unless you’re a curler).

Fortunately, the band has found something they like about Western Mass, if only for a little while.

There is no music scene in Ardsley — I couldn’t find any music searching on Bandcamp. After going separate ways for college and only doing the band sometimes, the group reconvened and took their music on the road, touring the country. During this coming-of-age road trip of sorts, they wanted to find a place to live and try out new songs from what would become their second release, O.

After searching high and low, Tundrastomper decided that Western Mass had their favorite underground music scene, which is certainly a testament to the area. (Sorry, Ardsley.) This past September the band moved to Easthampton and got a house together. I think they like it. I see them, often all together, at most shows I go to. Goldstein, the drummer, is now hinting at his desire to become a Western Mass “lifer.” And as someone who threatens to move away from time to time, it’s encouraging to meet new people who are so convinced they have found the greener grass, so to speak.

Tundrastomper’s first record, Victory, came out three years ago in the summer of 2014. They recorded it all themselves and it marks a type of bridge between what Goldstein described to me as their high school “funk demons” and the band they’ve now become. While their sound is wild on one hand, it’s soothing and grounded on the other — you can hear how much they love the Boston band Pile. Their handle of complex dynamics is masterful, even cunning, in the effect their music can have as it moves through you.

Their new record, O, is a grower; the more I listen, the more I like it. It comes out this Friday on Sad Cactus Records (Full disclosure: My band is on the same label). And although guitarist and vocalist Lloyd often serves up a heaping helping of self-deprecation —“I’m a soggy and prude impersonator,” he offers on “Total problem,” “Will I decide or just complain,” he asks on “Aqua” — O shows tremendous growth as a band, as they have honed a sound all their own.

Catch their CD release this Thursday at The Sierra Grille in Northampton with Hot Dirt and Experimental Audio Damage. It’s a great chance to welcome Tundrastomper to the neighborhood.