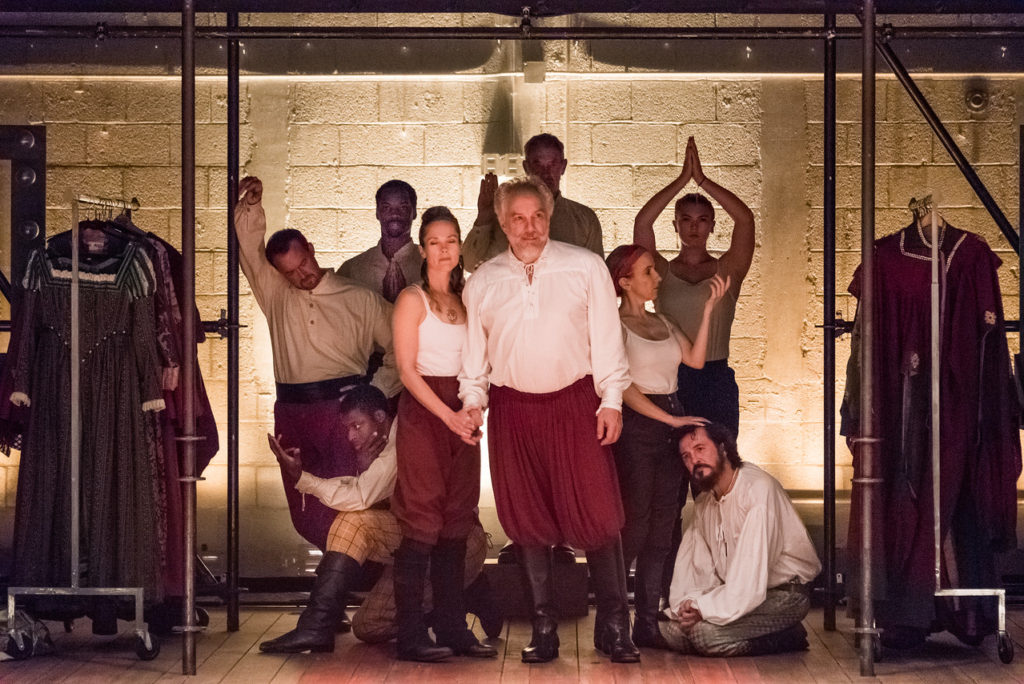 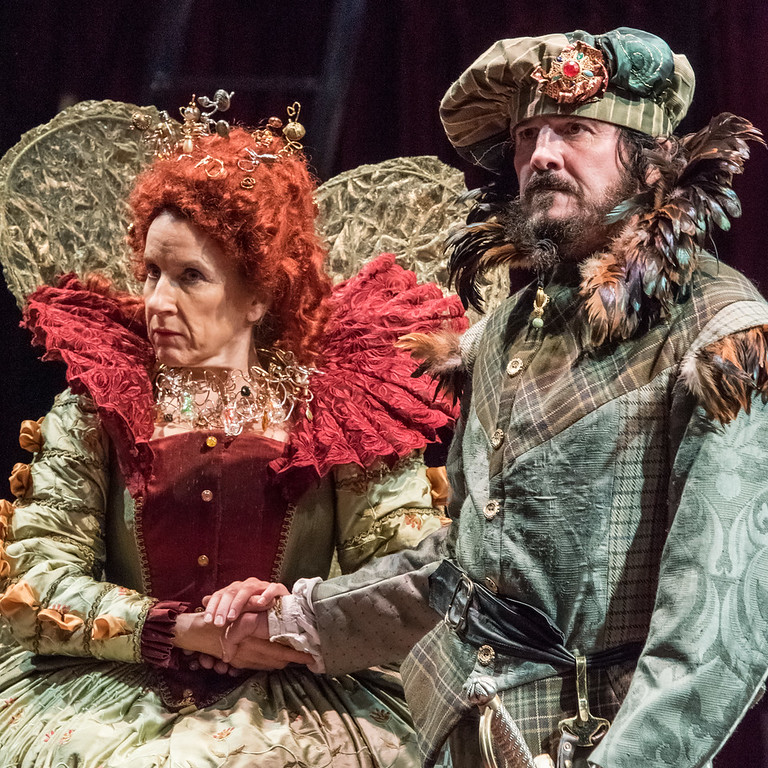 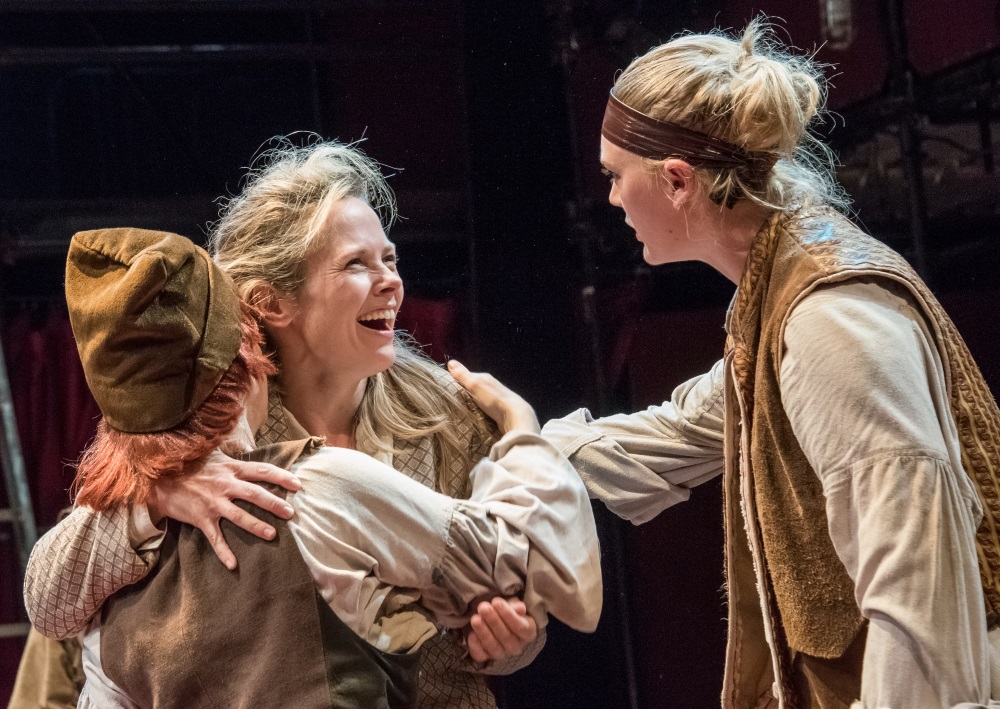 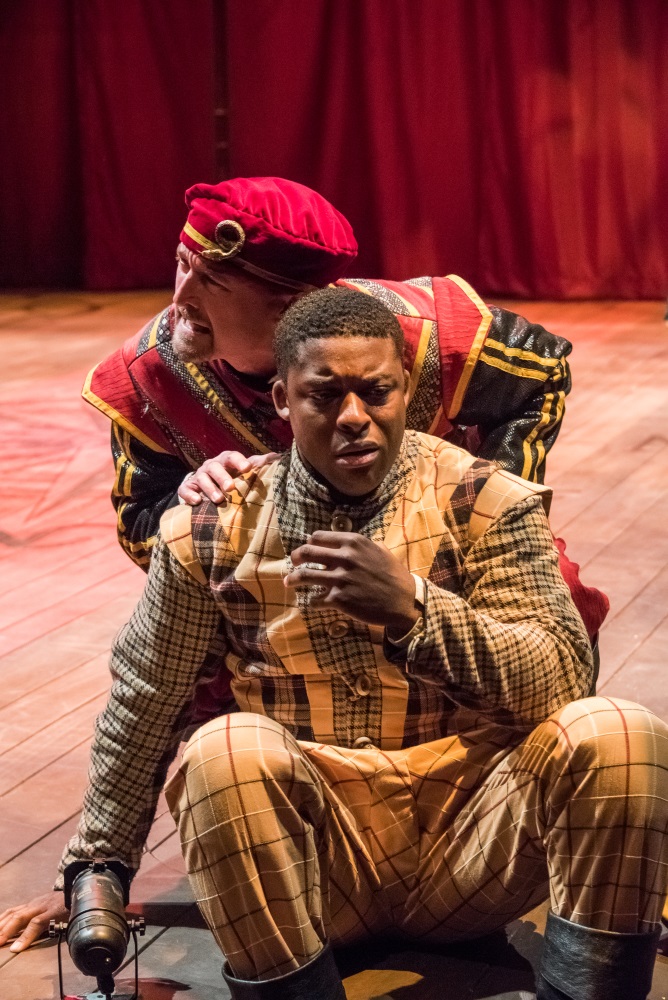 Cymbeline is one of Shakespeare’s “romances,” those late works in which comedy blends with tragedy and the endings are neither strewn with corpses nor aclang with wedding bells, but suffused with poignancy and forgiveness. The Tempest is the most popular of this group – in fact, it inaugurates the company’s new outdoor performance space next month – and Cymbeline runs a close second to Pericles as the least performed.

So the current revival at Shakespeare & Company can be viewed as a curiosity and an opportunity. Here, as in the other romances, the playwright threads together many of his favorite themes and plot devices – director Tina Packer enumerates “at least 20,” including banishment, misguided jealousy, lost love tokens, parent-child reunions, girl-disguised-as-boy and court vs. countryside. And like the others, it’s a fairy-tale adventure in which innocence and honesty are tested and coincidence conspires with magic to make all things come out right.

It’s a stylistic and narrative mashup that’s notoriously difficult to pull off. I’ve seen productions that took themselves too seriously and ended with the audience tittering at the last scene’s improbable revelations, and ones that simply clowned it up and took its heart out. Packer and her cast play it mostly for laughs, but without cancelling the script’s affecting and even dangerous moments. 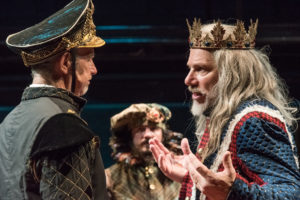 Some of the laughs come from the staging concept itself, the latest installment of S&Co’s Bare Bard approach, in which a small cast plays multiple parts – in this case, nine actors in two dozen roles, most of them familiar faces at S&Co. This tactic, coupled with shameless anachronism (including Tyler Kinney’s costumes), lends a thrilling informality that’s great fun to watch. Costume changes are often executed onstage and sometimes mid-scene. When Jonathan Epstein transforms to Cymbeline (in a union-jack robe), a stagehand holds a mirror while he adjusts the long gray wig, and in one scene Nigel Gore repeatedly jumps in and out of three different characters.

The plot is labyrinthine, but in a single sentence (deep breath) – young Posthumous (Thomas Brazzle), secret husband of Imogen (Tamara Hickey), is banished by her father, King Cymbeline of ancient Britain and ends up in ancient Rome, where he’s taunted into a wager on his wife’s virtue by the malicious Iachimo (Josh Aaron McCabe), who wins the bet through trickery, while meantime Imogen is being courted by the foppish Cloten (Jason Asprey) and ultimately flees to the Welsh countryside with a faithful servant (Deaon Griffin-Pressley) and is sheltered by a trio of shepherds (Gore, Bella Merlin and Ella Loudon), then stuff happens, and eventually all things come out right, but not before a prophetic appearance by the god Jupiter (Epstein). 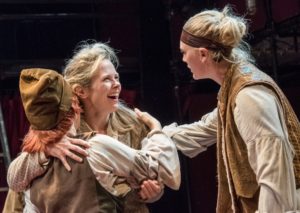 Perhaps fittingly, the performances are as motley as the plot. I enjoyed McCabe’s smirking villain, Asprey’s vainglorious courtier and Griffin-Pressley’s  stalwart servant, torn between honor and duty. In a generally boisterous ensemble, Epstein is the most disciplined performer and Brazzle the least, overpowering his castmates with sheer volume. Hickey makes a feisty if too often superficial Imogen, and Merlin likewise limits her own range by mistaking fervor for feeling. The production’s gem is newcomer Ella Loudon – smart, spirited and mistress of a luscious Welsh accent.

Opening this week at S&Co is my most-anticipated show of the summer: Lynn Notage’s Intimate Apparel, about two incongruous friendships. It’s directed by Daniela Varon and stars Nehassaiu deGannes and Christianna Nelson, both of whom shone in spotlight roles last season.