Can Western Mass Support Farm-To-Table For Everyone? 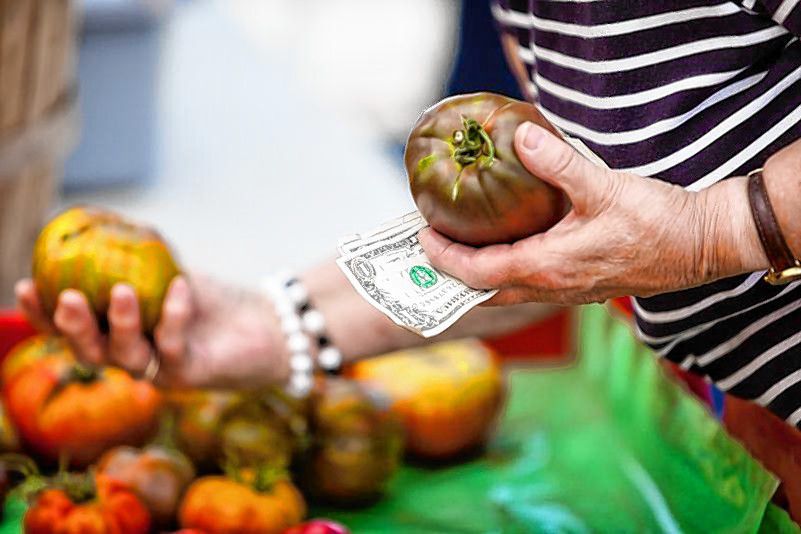 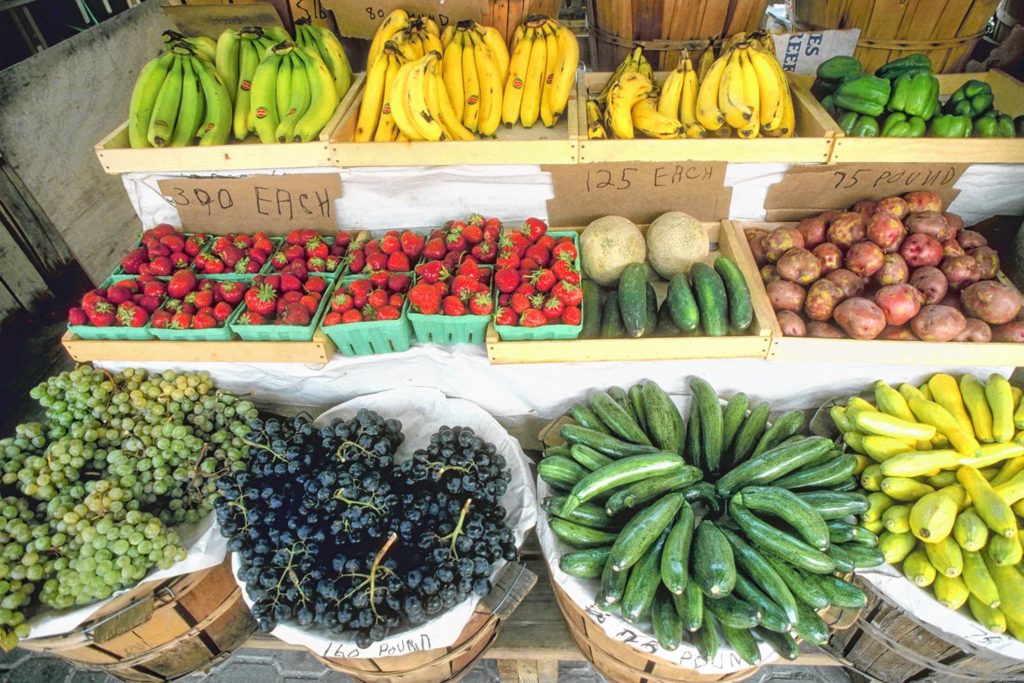 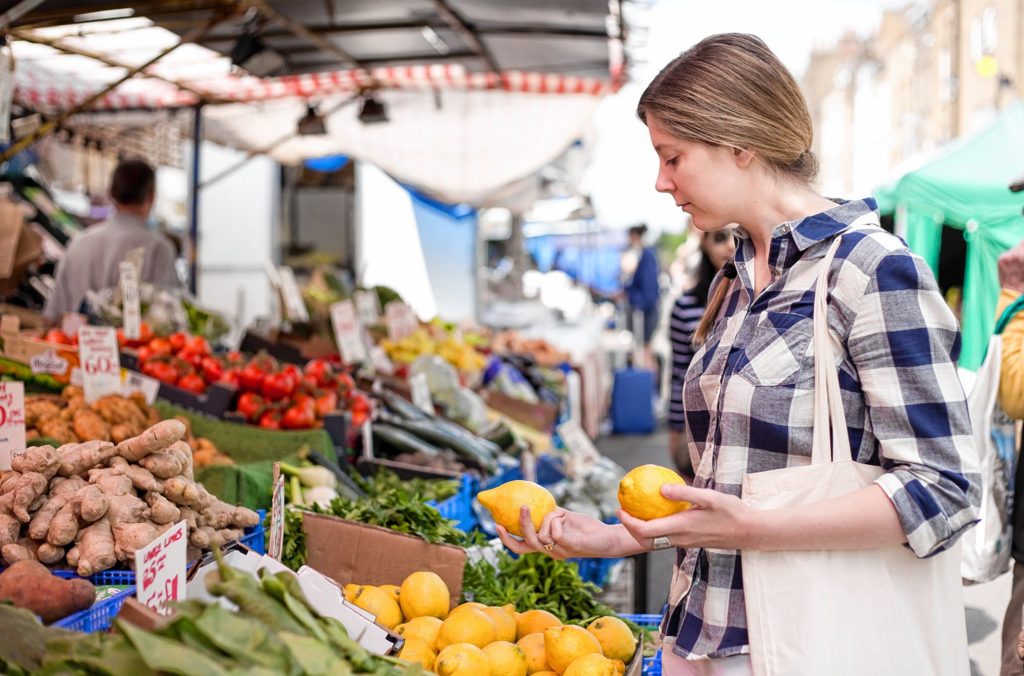 young woman at the market shopping

Nathan pulls his mother by the hand through the Springfield downtown farmers market stopping at none of the booths she wants to visit: the cookie stand, the hand-made jewlery display, the gourmet chips, and honey.

The 2-year-old loves the farmers market, his mother Emily Riehl says, but she wishes he would gravitate toward more of the farm than the market. Lured by the musicians who often play the Friday afternoon market, Riehl, 20, and Nathan, 2, started going to Springfield’s Central Downtown Farmers Market in July.

“I was surprised how much food is here,” she says. “I have only been to the one on Avocado Street before.” 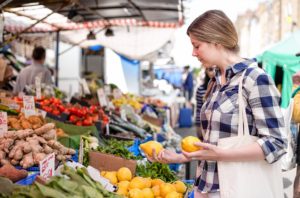 Riehl is talking about Springfield’s long-standing Saturday morning farmers market over by 99 Meat Outlet. It runs through June and specializes in selling plants and young veggie, herb, and fruit trees — it’s a place to get your garden started, not so much to pick up something for dinner.

“I like going, I can always find something I like,” Riehl says. Today, she’s picking up some raspberries and is looking for a vegetable to serve the dinner she is preparing for herself, her son, and sister, whom she lives with in an apartment on Chestnut Street. Riehl, who doesn’t drive, says she knows where to find produce near home, but it’s often expensive and not always fresh. For her, going to the farmers market is a treat, not a place to do her regular shopping.

“If it was around more, and I knew what I could get, and all year, then I could do more shopping here, but now it’s just fun,” she says.

Riehl is just the kind of person area farmers are trying to reach with new farm-to-table projects and businesses that seek to spread the healthy and economic benefits of fresh, local eating to people who aren’t typically around farms: she’s an urbanite, with not much disposable income, and limited access to fresh fruits and vegetables. She also lives in one of Springfield’s “food deserts,” areas lacking in easy, affordable access to healthy foods.

People in Hampshire and Franklin counties are a little spoiled when it comes to access to farm-fresh foods. The area is home to a growing number of small farms with exclusively local distribution, restaurants that brag about how local their foods are, and about five farmers markets per every 100,000 people in the state (here’s a guide to the nearby ones). Among Hampden, Hampshire, and Franklin counties and in Southern Vermont there are more than 20 restaurants that bill themselves as farm-to-table and dozens more that are committed to using as much local food as possible, but aren’t prepared to call themselves an F-2-T establishment.

So, who’s eating the food? 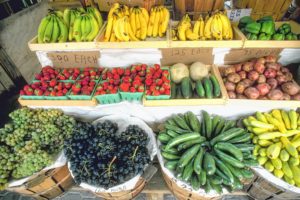 Critics have rightly noted that farm-to-table eating can be expensive as well as inaccessible for people without a lot of transportation options. Farm-to-table food is easiest to find near communities with farms. And due to the scale of production and transactions, and despite the lack of travel — local, fresh food from small farms will almost always cost more than a can of pineapple from Hawaii or a bag of carrots from a mono-ranch in California. The price and access issues disproportionately affect the people who are already most likely to struggle financially women, people of color, and gay people.

In the Pioneer Valley, however, there is a far-ranging effort to make farm-to-table something everyone can enjoy.

Last year, the Western Mass Food Bank delivered 10 million pounds of food — 800,000 pounds of which was local produce — to about 200 food agencies, pantries, soup kitchens, and survival centers in the area, says Chris Wojcik, the food bank’s marketing and communications manager. Restaurants like Coco and the Cellar Bar in Easthampton use a lot of locally produced foods in dishes, but also buy food from more mainstream sources to keep menu prices more affordable: the Coco and the Cellar Bar menu’s price range is $5-$24. Roger Taylor, who owns the restaurant with his wife Unmi Abkin, says it takes vigilance to serve in-season dishes at a good price.

“You’ve got to keep your eyes on it,” Taylor says. “You have to set aside some time everyday to see what’s newly available and there are so many good restaurants that are using the same produce that you have to decide to use something quickly and order it or whoops! It’s gone.”

Wheelhouse has a similar approach, but is committed to using nothing but local foods.

Jake Mazar said the on-the-go fare produced by Wheelhouse, a food truck and catering company he began with two friends a couple years ago, is traditionally prepared to be inexpensive. Add in Wheelhouse’s mission to be as farm-to-table as possible (they also have their own farm) and you get fresh, local produce on wheels.

“We fell in love with eating seasonably … and we wanted to have that same ethos of eating seasonably into prepared foods not just raw foods,” Mazar says. Wheelhouse has been expanding the catering side of its business, too, bringing farm-to-table menus anywhere on any budget. 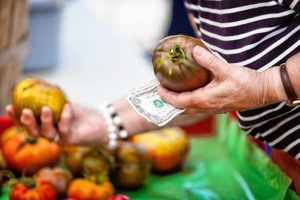 Nationwide, Massachusetts ranks 7th (some of the states ahead of us are Maine, Oregon, and Montana) on the Strolling of the Heifers Locavore Index. The index was started by Brattleboro, Vermont’s Strolling of the Heifers Committee in 2012 as another way for the weekend-long event to draw attention to farms, agriculture, and moseying cows. The index takes a national look at how much local food is consumed and supported per state. It takes into consideration data such as number of farmers markets, farm-to-school programs, and farming grants. In that first index, Massachusetts ranked 28th. Vermont has always come in first place.

“We really have been making a concerted effort to really reach out to local farmers,” Wojcik says.

So, Massachusetts has the supply, it seems, to get local produce to a wider variety of people, but the distribution channels aren’t as firm.

To promote access, in 2015 Western Mass Food Bank started a mobile food pantry. The truck visits 19 places in the three-county area on a consistent schedule so people can count on the food. Most of the stops are in Hampden County cities where farms are tiny and scarce. Anyone can take some food from the truck, Wojcik says.

“We go to areas where there is no access to front-line grocery stores and no types of healthy fruits and vegetables. We bring it directly to the people who need it,” Worjcik says. (Check the food bank’s website for mobile stops times and places.)

Though difficult to pin down, the modern farm-to-table movement is believed to have begun in California where chefs began experimenting with seasonal menus influenced by local bounty. In the 2000s the trend began to spread across the nation, and really got a foothold in the Valley.

One of the big reasons farm-to-table has taken root in Western Mass is the Community Involved in Sustaining Agriculture (CISA), a nonprofit that helps to connect farms to area food-producing/selling businesses and people. South Deerfield-based CISA has also invested heavily in awareness of farms and their importance to health, environment, and economy. It’s the group that started the “Be a Local Hero” campaign recognizing people and organizations that support local farming.

“CISA has done an amazing job of bridging the gap and making it easier for food producers and restaurants to get on the same page,” Taylor says.

The movement has spread because of its benefits. Farm-to-table isn’t just delicious; it’s a great way to help your community, economy, and environment. It …

Is fresh: Your local food doesn’t lose much nutrients during travel and that adds to the food’s healthy benefits and taste.

Is attractive: People come to Western Mass to eat at our restaurants and pick up their farm shares — that’s pretty sweet.

Mobile fresh produce trucks and farmers markets do help increase access to local, healthy foods, but, as Riehl, the 20-year-old mother of one, notes farmers markets are a “treat,” not a year round solution.