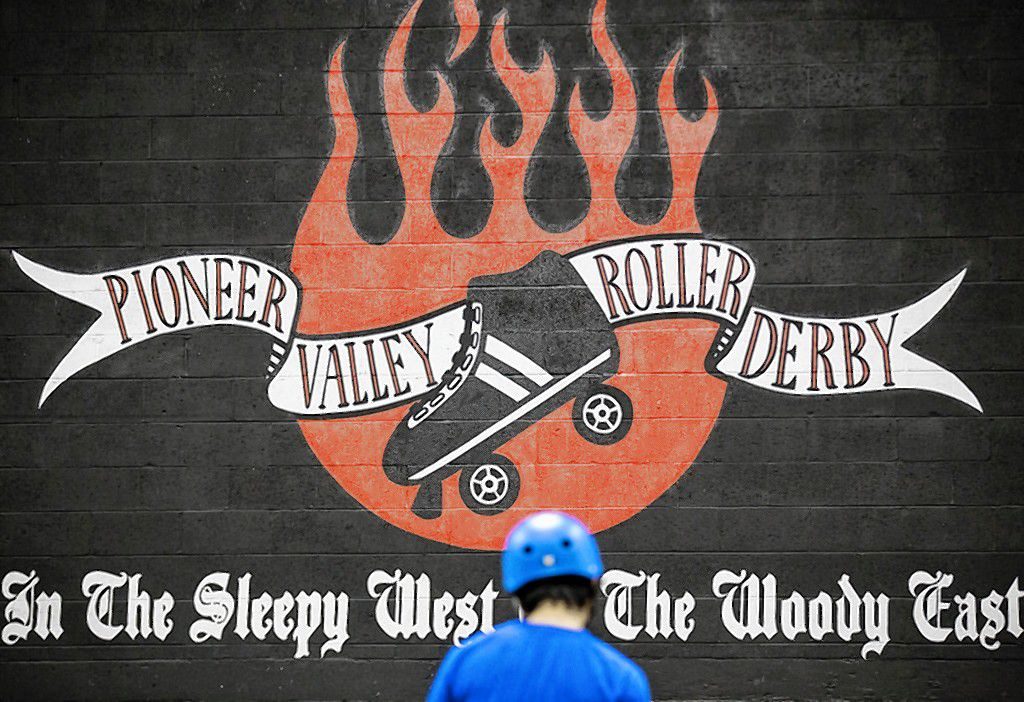 But in the Pioneer Valley, which was at the forefront of the roller derby revival, the sport has evolved from, as Pioneer Valley Roller Derby (PVRD) Team Captain Teresa Huang described it, a “women-centric, DIY, grassroots revival,” to something that includes all genders, including those who don’t identify with a gender. PVRD is proud to be home of one of the first all/no genders team, called United Front.

One member of United Front, Alex Kapitan, aka Peter Pandemonium, is a 33-year-old Greenfield resident who identities as non binary. Kapitan said it is important to have an inclusive team in the sport.

“In pretty much every team sport I know of, there’s no way to play without ‘picking a side’ in terms of being a woman or a man — at least not at the more competitive levels of the sport,” Kapitan said.

“When I heard about United Front I was over the moon. I couldn’t believe it. Not only was this a sport that I was excited about, but here was a team that was intentionally making space for someone like me who couldn’t play gendered team sports,” Kapitan said.

“It creates space not only for more gender identities, but also for more gender expression and more types of bodies. It’s a more welcoming environment for all sorts of people,” Kapitan said.

While the PVRD is known for being inclusive to all genders, it hasn’t lost its focus on female strength, one of the focal points of the roller derby revival, according to Western Mass Destruction (WMD) women’s team member Sarah Carlton, 27, of Easthampton.

“There is something really powerful about playing on a women’s derby team. It has increased my confidence in many ways,” she said. “Derby has also made me much more confident in my body. I now think less about what my body looks like, and more about all the awesome things my body can do. There’s a really awesome feminist energy to women’s derby.”

Roller Derby, which at the height of its popularity was played by men and woman on a “bank” or curved track, fell off by the mid-1980s. But the early-2000s revival shifted to using flat tracks, which are easier to maintain and setup. The flat track also allows more of a focus on sportsmanship over performance, though who can resist a little performance in something as flashy and fun as roller derby.

The PVRD was established in 2006, and founders Jake Fahy (aka Bazooka Joe) and Sarah Lang (aka Pink Panzer) took the feminist edge of roller derby to a whole new level with the inclusion of something totally unheard of in the world of flat track derby: a men’s team.

This team, originally called Guys in Red from Massachusetts before being rebranded with the flashier name, “The Dirty Dozen,” was the first men’s roller derby team in the United States. In the years since their creation, ‘dozens’ of men’s teams have spring up across the country. PVRD even founded

In 2015 PVRD decided to take a step towards an even more inclusive derby league with the creation of the United Front team, an all gender/no gender team that welcomes non binary, agender, non assigned and trans folks, and cis people of all walks of life.

Today the PVRD is home to four different teams. Officially, there are two women’s teams, a men’s team, and the all inclusive/no gender team, though all of the teams at this point are co-ed and open to non binary folks.

David Ketchum, who just goes by his apt last name on the track, is a member of both the Dirty Dozen and the United Front, and impressively — at 62 — is the second oldest man still skating roller derby in the United States. He said he started watching derby in 1968 and was instantly drawn in.

“It was the kind of sport where every fan watching it wished they could play it,” he said.

Ketchum explained that when he first started watching derby one of the things that attracted him most about it was its inclusiveness. “The older roller derby was ahead of its time in terms of racial barriers and gay and lesbian and others — it was a really open inclusive community. It had African Americans and Hispanic athletes skate before a lot of other sport leagues allowed people of color in.”

In the beginning derby was comprised of both men and women’s teams, but when the derby resurrection began it did so with only female teams. Ketchum explained that this, along with the flat track, made many fans and skaters of the original derby wary of the revival. However, the addition of men’s teams has helped ease their minds, he said.

Ketchum was excited when he learned that the Pioneer Valley would be the home of the first men’s flat track derby team, but being 51 at the time, he thought he would probably have to play a support role to the team. That turned out not to be the case. When co-founder Lang met with Ketchum, she said simply: “You’re not too old to skate — so skate.”

Ketchum has been a member of the Dirty Dozen ever since. He said that there were lots of hurdles to overcome at first, not least of which was a lack of opponents. The team started out with exhibition shows until another men’s team started up.

Roller derby is a serious sport; the high level of skill and sportsmanship involved means that it can take years for members to be able to qualify and participate in matches. That’s another reason he has been grateful to be accepted on the team at his age.

“They don’t see me as the old man that’s skating with them; they just see me as a teammate,” he said. “There is a real sense of community, a lot of support, people form friendships that endure on and off the track.”

But as positive an experience derby is for its members, Teresa Huang aka Jack A. Lope, the captain of the Western Mass Destruction and also a member of Pioneer Valley Roller Derby’s Board of Directors still thinks most people in the Pioneer Valley are unaware of the league. And that’s something she hopes to change.

“There’s still a lot of people who don’t know there’s local roller derby right in their backyard,” she said. “There’s a lot of athletic showmanship and skill that I think our community would really appreciate once we get them in the door.”

Christin Howard can be reached at christinhowa@umass.edu.