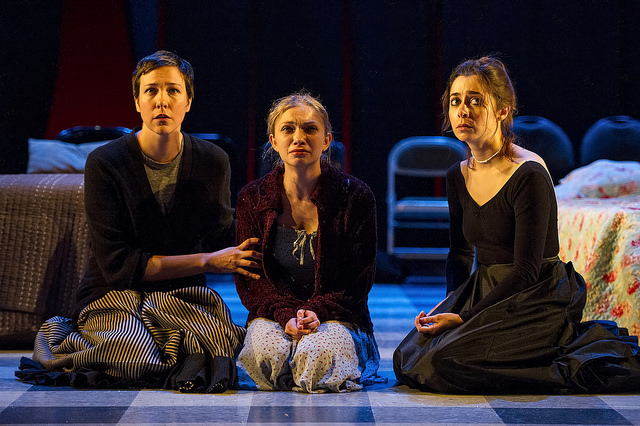 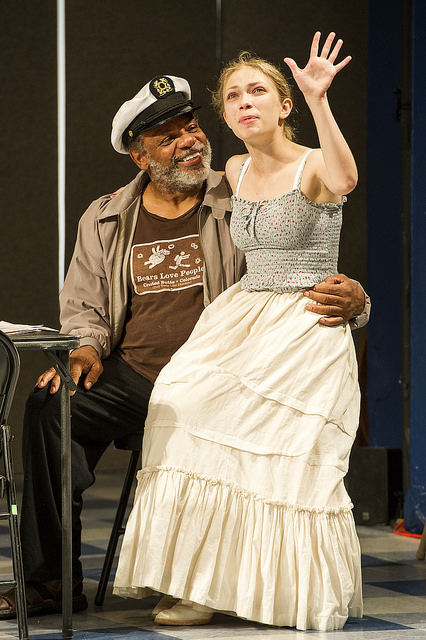 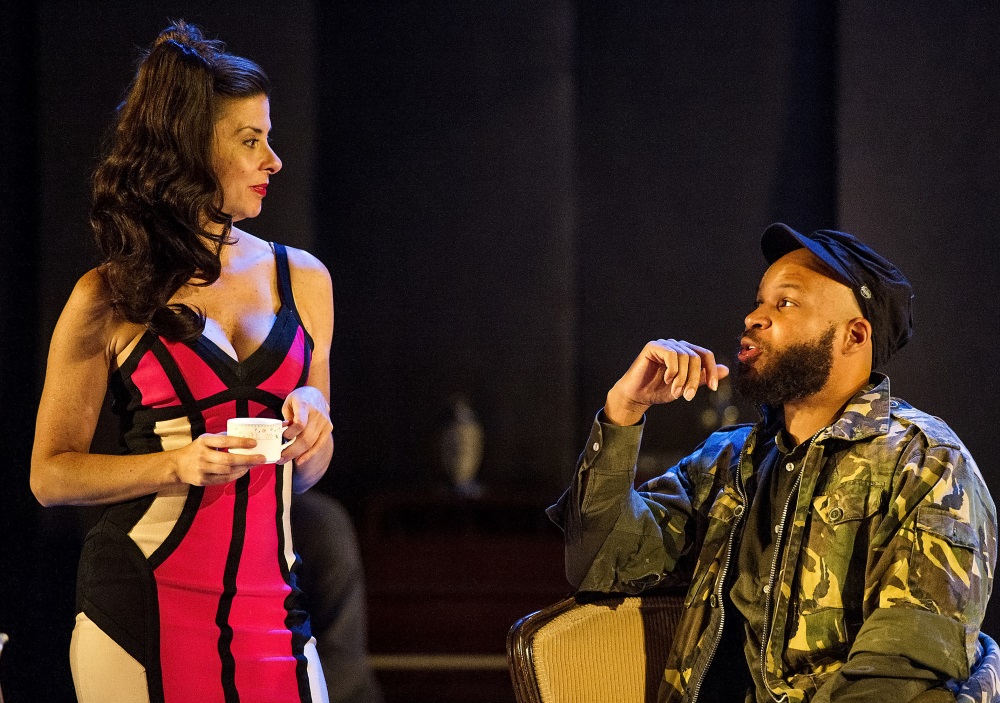 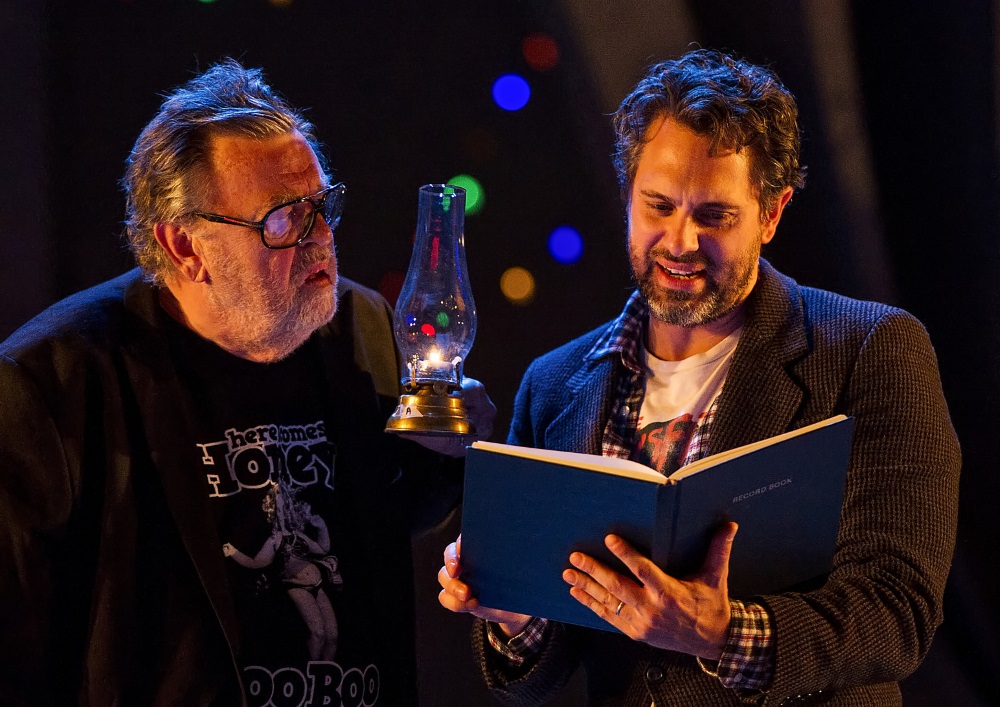 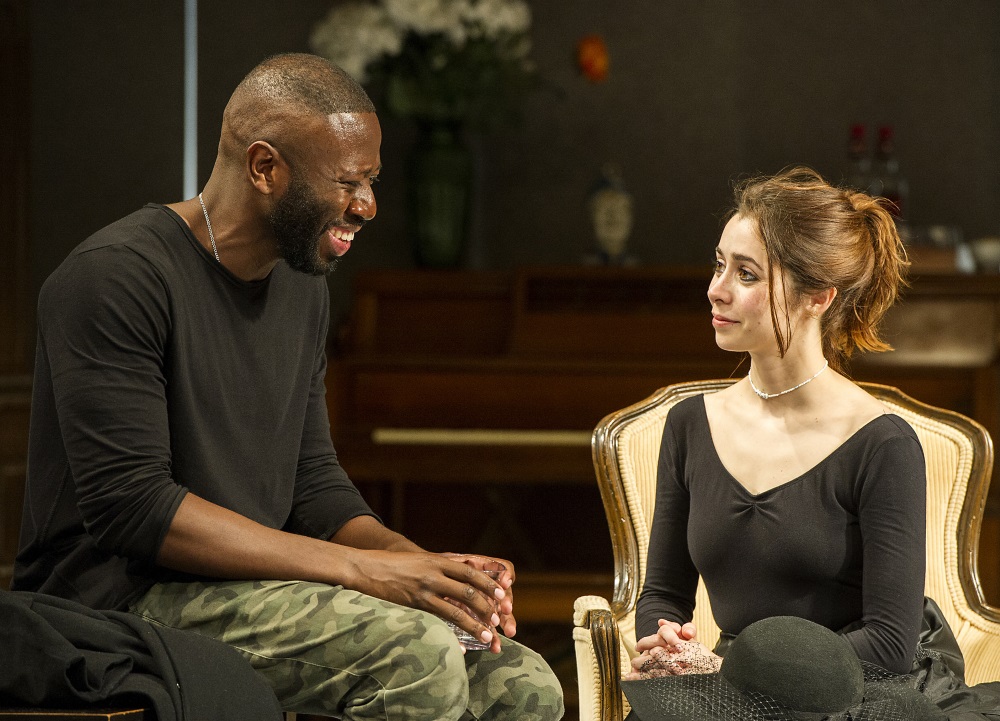 What is it with all the Chekhov parodies? Just this summer Silverthorne Theater Company gave us Stupid Fucking Bird, Aaron Posner’s metatheatrical riff on The Seagull. There’s Vanya and Sonia and Masha and Spike, Christopher Durang’s Uncle Vanya mashup. And last year I directed Nagle Jackson’s The Quick-Change Room, about a Russian theater turning The Three Sisters into a musical comedy. 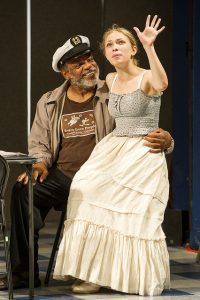 Now comes Moscow, Moscow, Moscow, Moscow, Moscow, Moscow, by Halley Feiffer, playwright daughter of the satirical genius Jules Feiffer. It’s playing through this weekend at the Williamstown Theatre Festival. WTF’s version likewise deconstructs The Three Sisters, mostly by updating the language to, like, today, y’know? and letting those pent-up frustrations and desires that define Chekhov’s moody, unfulfilled characters spill out all over the stage. The title seems to be the playwright’s summary of the sisters’ oft-repeated longing for the big-city lights while they are stuck in a provincial backwater. (One of the other characters succinctly agrees with them: “The Russian countryside blows.”)

I imagine Feiffer’s purpose is to demonstrate that Chekhov’s themes, characters and conflicts are eternal, as valid now as they were in 1900. She does it by having the trio talk and act like new-hatched millennials. Here, Chekhov’s sisters – Olga the hard-working schoolteacher (Rebecca Henderson), Masha the discontented wife (Cristin Milioti) and Irina the young idealist (Tavi Gevinson) – behave alarmingly like a posse of middle-school girls. They’re willful and spiteful, frisky and sulky, perverse and profane, self-doubting, self-centered, and most of all boh-wered. 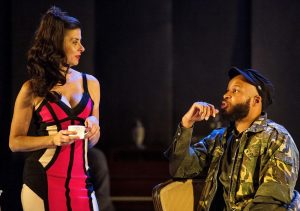 Director Trip Cullman takes the playwright’s conceit of timelessness and runs with it. Paloma Young’s costumes are a parade of mixed anachronisms – logo’d t-shirts atop floor-length skirts, shocking-pink sheaths and camo fatigues. The stage is strewn with a mix of antique upholstery and folding chairs.

There’s also the odd meta-moment. The book that Masha has her nose in throughout Act One is titled Masha – Act One Prompt Book, and a couple of times a piece of exposition is interrupted with comments like “You don’t have to give me the backstory, I live here, you know.” 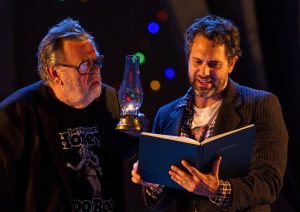 Almost a dozen other characters echo the sisters’ travestied misery, all of them burlesques of Chekhov’s originals. The languid Baron Tuzenbach (Micah Stock) is in love with Irina but “seems a little gay.” Irina’s other suitor, Captain Solyony (Glenn Davis, sweet and clueless), makes dumb sarcastic jokes, hoping to be noticed. (There’s another middle-school moment when Tuzenbach explains to Solyony why he’s such an uncool loser.)

Andrei, the sisters’ academic brother (a scowling Thomas Sadosky) falls foolishly in love with sexy, bossy Natasha (Jeanine Serralles, who later has her own adolescent meltdown), and their romance is consummated in a slapstick fuck during lunch. 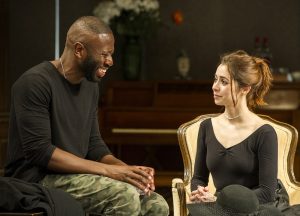 The hanky-panky continues as Colonel Vershinin (a dashing Sheaun McKinney) starts an affair with Masha under the nose of her pedantic husband (Ryan Spahn, spectacled and apologetic). The two elderly servants (Gene Jones and Ako) are pathetically dim and pathetically frail, respectively.

In the second half, the clownish jokiness is tamped down and parody gives way to paraphrase, the dialogue often running close to Chekhov’s and the tone turning to Chekhovian gloom. But by then it’s a little late. On opening night the audience, primed by wackiness, took every opportunity to laugh, even giving sad ironies a chuckle.

As it happens, Sarah Ruhl’s The Clean House, which closed on WTF’s mainstage the same day Moscow Moscow etc. opened, offered a lesson in how to make the turn from farce to pathos. A truly zany first half blended into poignant scenes of love and death without letting its sense of humor undermine its dignity.

Moscow Moscow Moscow Moscow Moscow Moscow is one of five world premieres at WFT this season. Opening this week is A Legendary Romance, a musical about Hollywood movies, starring Barrington Stage favorite Jeff McCarthy. Next week, on the intimate Nikos Stage, comes Actually, an intimate confrontation between two young students, one black, one white, over “intimacy and responsibility, power and provocation, privilege and protocol.”