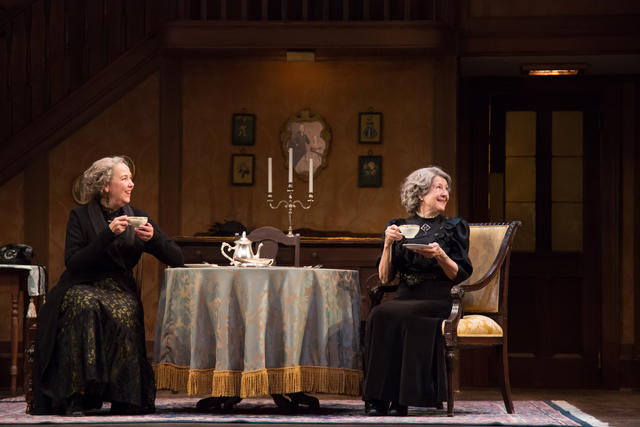 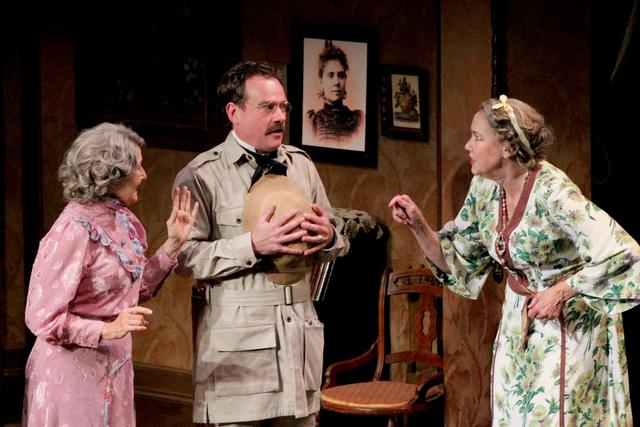 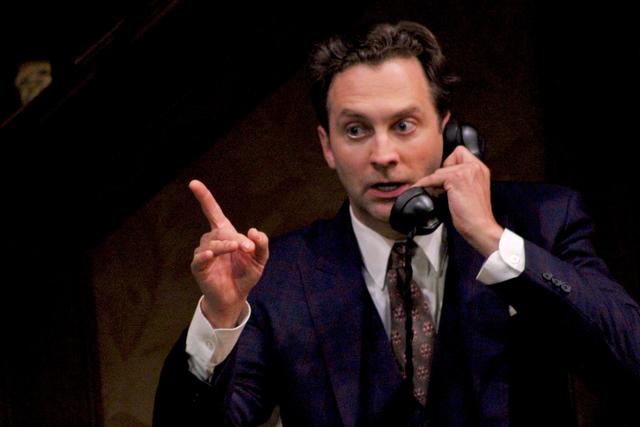 The Fitzpatrick Mainstage on the Berkshire Theatre Group’s Stockbridge campus is the site of what I’m told is the country’s oldest continuously operating summer theater. For 89 years the building, converted from a former casino in 1928 by Broadway star Eva Le Gallienne, has staged a wide-ranging repertoire and launched dozens of stage and screen stars.

This season BTG, perhaps looking ahead to next year’s 90th anniversary, has offered a selection of Broadway classics spanning the forties to the eighties, with a dip into the aughts. Earlier this season saw the moving drama Children of a Lesser God on the Mainstage, while up in Pittsfield, The Music Man played in the majestic Colonial Theatre. The intimate Unicorn Theatre hosted the jukebox musical Million Dollar Quartet, followed by At Home in the Zoo, Edward Albee’s late-career completion of his classic Zoo Story.

And now playing in the venerable old Mainstage is the venerable old comedy Arsenic and Old Lace. It’s an old-fashioned play in the classic sense − well plotted, abundantly cast (14 characters!) and with three acts. Scenic designer Randall Parsons has given it a classically old-fashioned living room set − old wood and wallpaper, lace curtains on the windows, a two-landing staircase and stained glass in the front door.

Joseph Kesselring’s play premiered on Broadway in 1941 and was filmed by Frank Capra in 1944. Both versions take note of wartime tensions, then blithely abandon all care to the jovially gruesome tale of the two spinster sisters whose charitable mission is to ease the loneliness of solitary old men by poisoning them.

The play has been a summer- and community-theater staple for six decades, and like any durable warhorse, it more or less runs itself. Director Gregg Edelman gives it the only kind of production it wants or needs − straight-up traditional. The cast also recalls the show’s pro-am history, with a few sparkling performances paired with so-so turns.

Mia Dillon and Harriet Harris, playing the lethal biddies Martha and Abby, embody the cast’s disparities. Dillon gives us a rather uniform cute-old-lady act, while Harris uses her mobile face, agile body, supple voice and exquisite timing to squeeze out every possible ounce of comedy. 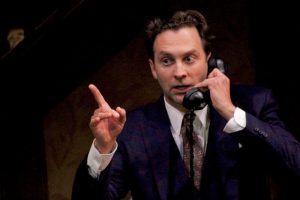 Graham Rowat is Mortimer Brewster, the ladies’ nephew, a drama critic − and oh yes, there are plenty of potshots taken at that profession and the theater in general. He’s sometimes too big, vocally and physically, and is rather too old for the part, but his moments of wild-eyed alarm at his aunts’ escapades, and his twitchy panic when trying to keep the cops and others from finding the body (make that bodies) stowed in the window seat, are priceless.

A running gag in the script is that Jonathan, Mortimer’s gangster brother, bears a striking resemblance to Boris Karloff in his signature role as Frankenstein’s monster. In the original production, that gag had extra punch because Karloff himself played the part. Here, he’s played by Matt Sullivan, who looks the part but also speaks in a mongrel English-German accent, apparently trying to sound like Karloff as well, which worked for Boris but doesn’t make sense for Brooklyn-born Jonathan. 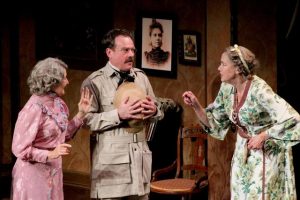 Tom Story plays Jonathan’s sidekick, Dr. Einstein, the plastic surgeon responsible for the Frankenface. At first I thought Story was going for an oily/whiny impression of Peter Lorre, who played the role in the film, but unfortunately that quickly yields to a standard mad German scientist.

Timothy Gulan gives a sweet zaniness to the sisters’ loveable lunatic of a brother, who thinks he’s Teddy Roosevelt. He can’t go upstairs without drawing his pretend sword and leading the “Charge!” up San Juan Hill, and he helpfully buries the deceased gentlemen in the cellar, thinking he’s digging locks for the Panama Canal.

In two cameos, Walton Wilson does the portly pastor in wobbly Irish and the peremptory police lootenant in credible Brooklynese. As another cop, a would-be playwright with a tediously epic script idea, Gerry McIntyre is pure ham. Katie Birenboim plays Mortimer’s fiancée Elaine with screwball-comedy pluck and a Minnie Mouse voice.

Arsenic and Old Lace runs till August 19, and At Home in the Zoo to the 26th, at Berkshire Theatre Group.