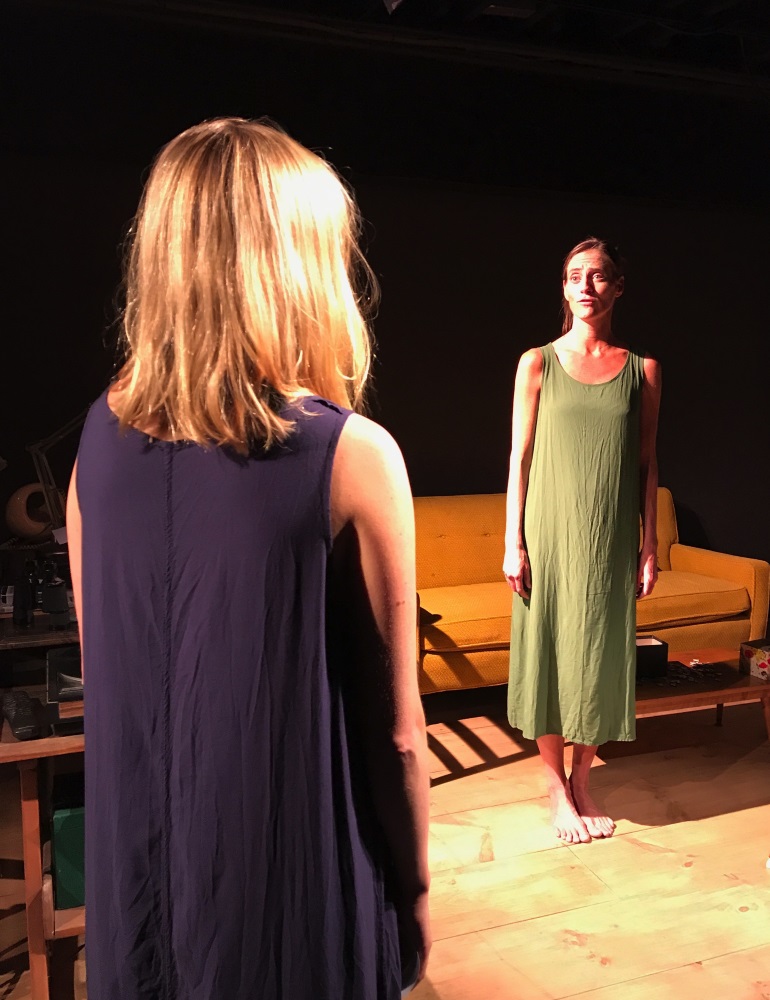 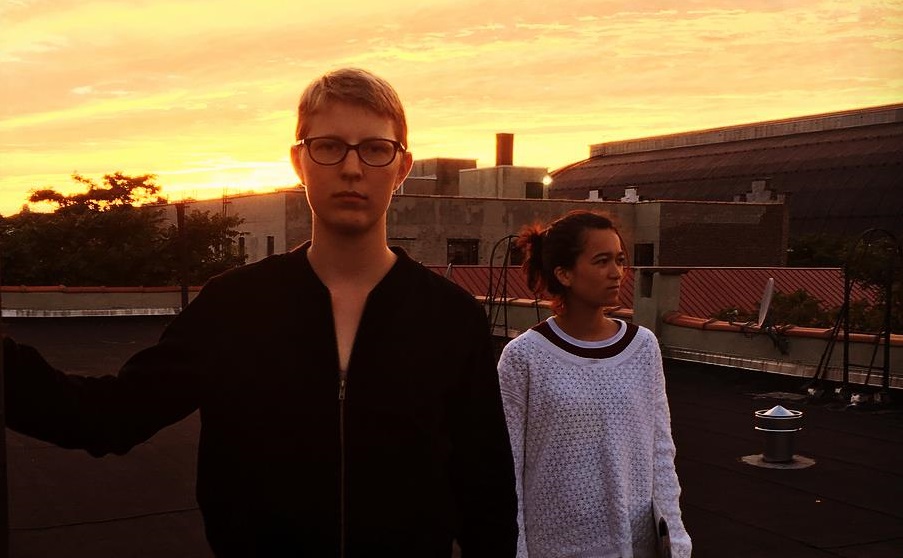 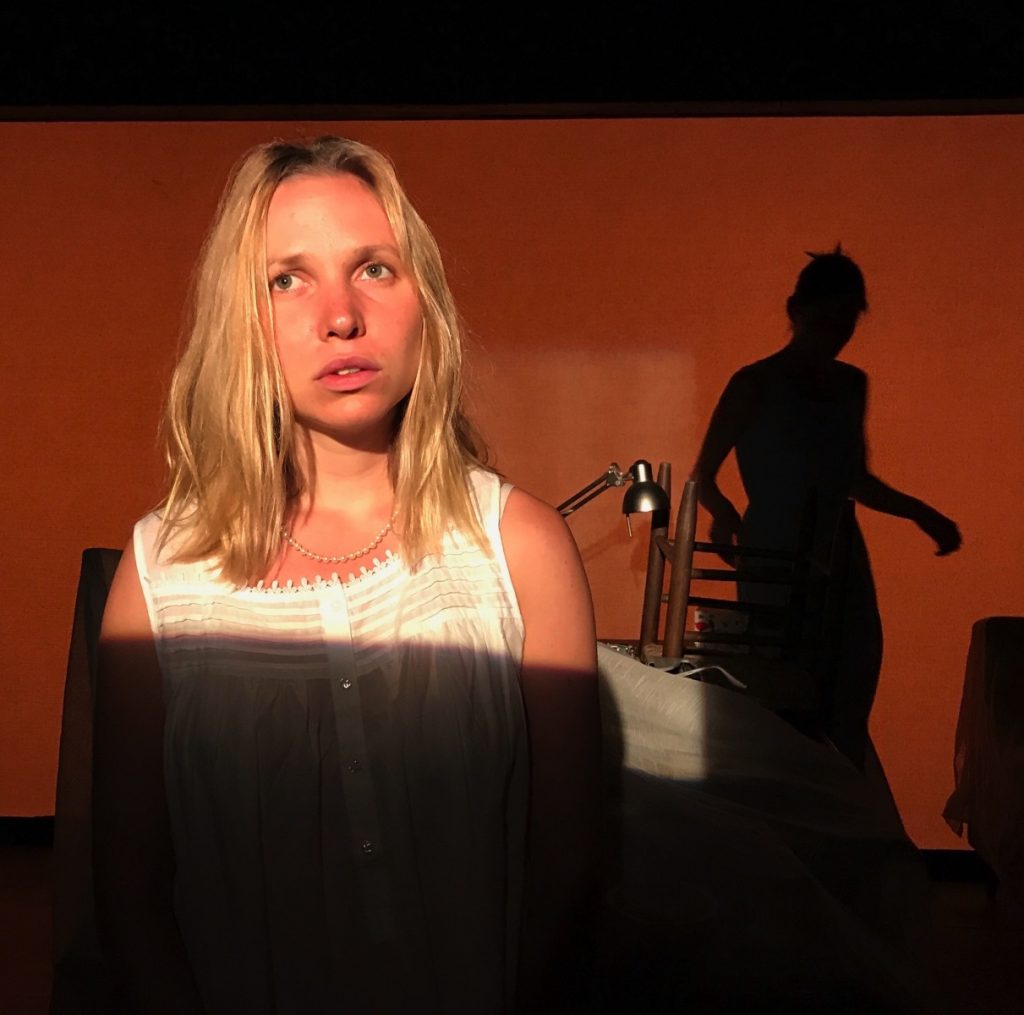 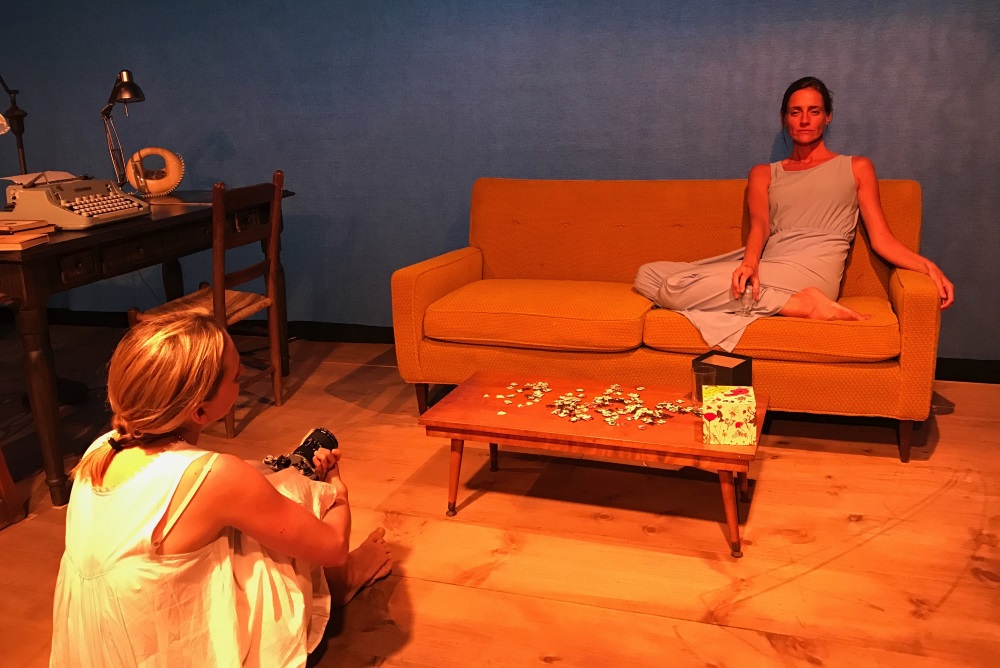 A pair of two-handers, playing through this month and just next weekend respectively, examine intimate, intricate relationships between women. Harbor Stage Company, one of the region’s most reliably stimulating summer theaters, premieres its adaption of a cinema classic (see below) and the Valley’s adventurous Clementine Theater Collective celebrates its second season with a “sharp, moving almost-love story.”

The Clementine Collective, founded last year by alums of the Pioneer Valley Performing Arts Charter School, seeks “to enrich the Pioneer Valley with socially relevant plays … promote acceptance and diversity to share new and otherwise neglected stories [and] create a space for young artists to develop, connect and support each other’s work.”

The Zero Hour, by Pulitzer finalist Madeleine George, explores the relationship of closeted Rebecca and her butch girlfriend O. Their domestic bliss in a Queens walkup has begun to fray over O’s carefree state of unemployment and Rebecca’s ambivalence about her sexuality, and it’s perhaps this tension that gives rise to strange occurrences in both women’s lives. 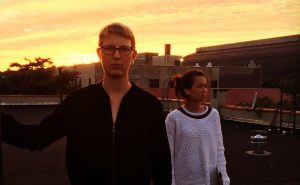 Rebecca, a textbook author, is working on a middle-school book about the Holocaust when she begins encountering amiable WWII-era Nazis on the subway. At the same time, O starts getting visits from her mother’s ghost.

When The Zero Hour debuted in 2010, the New York press praised the playwright’s “bold and offbeat approach … that makes such scenarios not only plausible, but emotionally resonant” and called the play “appealingly brainy and messy. It cross-examines our pat notions of history and love.”

Clementine’s production is directed by Amelia Cain, a recent graduate of Boston University’s theater program, and stars Annalise Cain (herself a prize-winning playwright) and Erica Huang. As Annalise mused recently, “If I have learned nothing from this past year, it has been that the political is personal. Our smallest acts reveal our deepest beliefs. George’s play allows the audience to see how personal acts of brutality turn political, and vice versa.” The play, she said, “will be both a release from our current world and a reflection upon it.”

Ingmar Bergman’s Persona, often considered his masterpiece, is one of his most intensely intimate and tantalizingly enigmatic works. The 1966 film, starring Bibi Andersson and Liv Ullmann, is a web of interacting themes, including the permeability of identity, the act of perceiving and being perceived, the costs of isolation and the artist as vampire.

Persona is also perhaps Bergman’s most cinematic work. The narrative is intercut with images that double back on the movie itself − silent-movie clips, shots of the camera that’s shooting the film, even the celluloid itself, careening through a projector then jamming and melting.

The temptation in adapting a film for the stage is to make it as faithfully cinematic as possible (as in, all those Broadway musicals). The secret to a successful transition is finding the essence that can survive the journey intact. Robert Kropf, adapter and director of the Persona playing through September 2nd at Harbor Stage, on Cape Cod, has conscientiously avoided the former and superbly captured the latter. 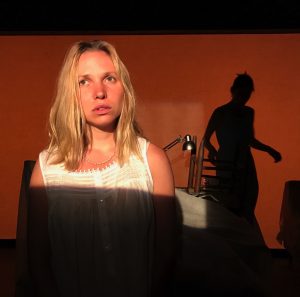 Kropf has moved the setting from Sweden to a nonspecific America and slightly altered the characters’ names, but the premise and its arc are unchanged. A famous actress, Elsbeth (Jane Stiles O’Hara), has suddenly stopped speaking. It’s not a medical condition but an act of will, but whether it’s a willful act or an existential rupture is unknown.

Secluded in a seaside cottage, her nurse and caretaker Anna (Brenda Withers) chatters away, trying to draw her out, but gradually finds herself sharing her own deepest secrets instead. When she accidentally discovers that Elsbeth considers her little more than an object of study, a subject for character research, her hurt and resentment mingle with the creeping sense that she’s losing her own sense of self.

Kropf’s play is not only an adaptation, but a translation, one that’s true to both its source and its new medium. His text makes the movie’s themes and interactions more explicit and accessible. The “meta” elements are not about the cinema but the theater. Where Bergman’s performers often gaze into the camera’s eye, Kropf’s stand spotlit in the glare of our regard. In one cheeky meta-moment, Withers steps forward to begin a monologue, then remembers she’s forgotten a prop and scurries upstage to retrieve it. 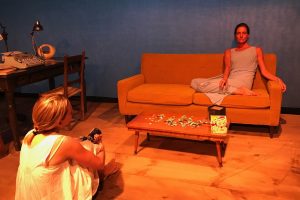 The physical production, too, keeps reminding us we’re watching a play. Between scenes the two performers move in half-light to shift furniture and set props. Sara C. Walsh’s set, deftly lit by John R. Malinowski, crams suggestions of multiple locations onto the pocket-sized stage, inviting us to imagine doors and windows, sand and surf.

I’m an unconditional Brenda Withers fan. I would watch her doing a cooking show. Her lithe frame is never quite still, her mobile visage never far from irony. Here, she gives Anna a starched propriety that from the outset feels ill-fitting, as tentative builds to talkative and finally to devastating perception. The French accent she adopts also sets her character culturally apart while lending her a Continental sophistication.

O’Hara has perhaps the more difficult role, and carries it adroitly. With no lines, she’s mostly about reactions, but her physical and facial language speaks volumes as the emotional terrain shifts beneath both of them.

Harbor Stage prides itself on being an artist-run company that’s both fully professional and community-minded. At the box office, you’re likely to be handed your tickets by a performer you last saw onstage − and at $23, those tickets are part and parcel of the troupe’s mission to make theater affordable as well as awesome.