“Where Were You When …” 9/11, OJ, Cobain and More Defining Moments: An Advocate Chat 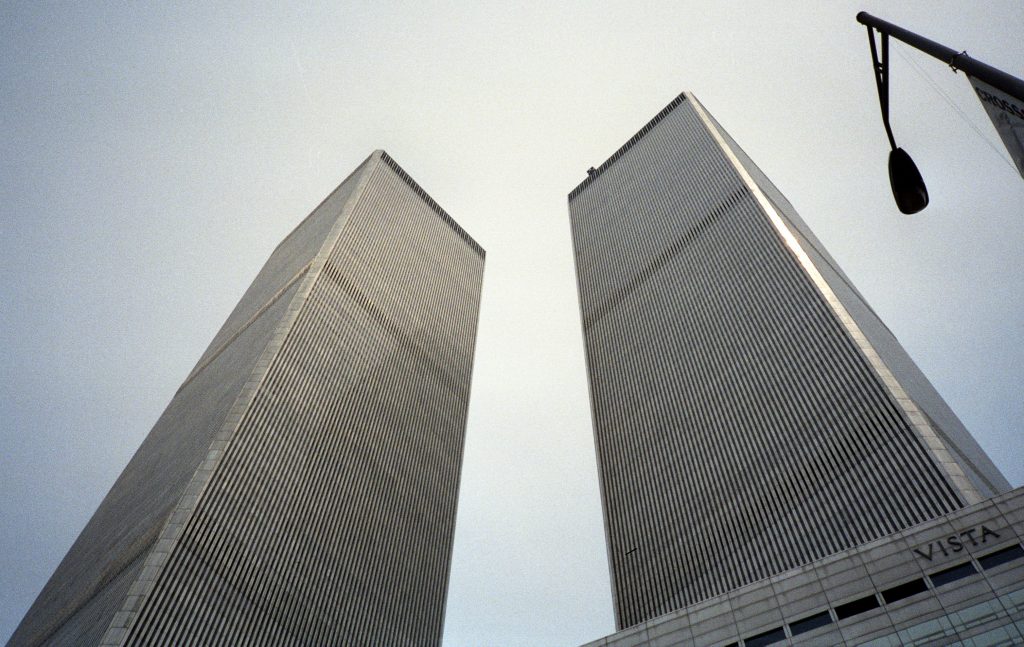 dave.eisen (Managing Editor Dave Eisenstadter): The past few weeks have had some shocking news. So we wanted to chat about the really shocking news in our lives, those “where were you when” moments that everyone remembers.

kristinpalpini (Editor-in-Chief Kristin Palpini): Soooo looking at a list Slate has of all the top where were you when moments, it’s missing when Kurt Cobain died in April 1994. That was big for me. I cried for days. I was 13 so, yeah.

dave.eisen: I was not aware of Kurt Cobain until after his death, but I do remember a friend of mine playing “Smells Like Teen Spirit” at the middle school talent show.

jlevesque (Art Director Jennifer Levesque): That was actually when I first found out who he was. I was 10 and saw my mom’s friend’s son in tears and that’s when I first listened to Nirvana. Changed my world, haha.

kristinpalpini: Ooo that is a good one to add. I was in a depression slumber over the direction of the incoming polls.

jlevesque: I was drunk on red wine and screaming at the TV, then went to bed crying. Fun times.

kristinpalpini: When i woke up early and had to run into the office to change the paper to reflect the results I was in a state of panic and bewilderment. And very hurt. 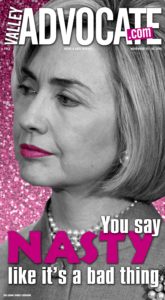 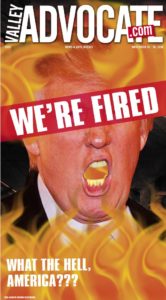 dave.eisen: I was in the Daily Hampshire Gazette newsroom inputting numbers on our election spreadsheets. I was actually pretty confident he was going to lose despite the numbers coming in, even pretty late into the night. It always takes urban areas longer to vote than rural ones. But HRC just never came back…

cgoudreau (Staff Writer Chris Goudreau): I remember waking up at various stages of the night and wanting to scream at the top of my lungs.

kristinpalpini: I felt like if Trump can get elected people don’t matter as much.

jlevesque: I wanted the nasty woman to be Prez. And I really thought that she was going to be.

kristinpalpini: We were going to get tattoos! NASTY 4 LIFE

jlevesque: Yes!!! We still should! 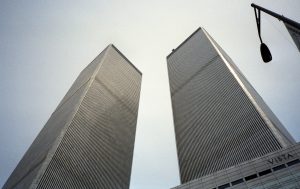 dave.eisen: Ooh, 9/11 yes. I was a freshman in college and there was a TV on in the dining common. It was so weird because no one was watching. I left for class right as the first tower went down and I was late. When I got there the professor was all pissed that I was late. So I told him what happened and he was really freaked out …

kristinpalpini: Wow, so you were the one who broke the news to your class.

dave.eisen: Yeah, college was a bubble, so no one really had been watching the news. Also … pre-smart phone. That would be unthinkable now.

kristinpalpini: I woke up in a seedy hotel room when a friend phoned my cell. She was crying and said, “Turn on the TV. We’re under attack.” “What channel?” “Any one!” The TV was tuned to A&E; Young Frankenstein was on. “Any other channel!” she insisted. And then I saw the smoking crater on TV and was silent, where the towers had stood looked like the mouth of a volcano.

jlevesque: I was skipping school. Driving with my friend and we were trying to find music on the radio and all it was was talk radio. We’re like this isn’t happening, is it? It’s gotta be a joke. Then we went to her house and watched it all come down on live TV. Still gives me the chills.

cgoudreau: I was in the fifth grade and remember my teachers rolling in TVs to watch the news. I don’t think many of the kids, myself included, could really grasp the full impact of what had happened. I don’t remember being particularly frightened.

kristinpalpini: They brought the TVs in to show the 10-year-olds …. I’m a little surprised they did that, but also I think it’s a good move.

dave.eisen: Other than 9/11 and Trump, is there anything from this century that jumps to the level of “where you were when” news?

kristinpalpini: The Sandy Hook massacre. I was the web editor at the Gazette and had to keep updating the story with all the new details of this sick murder.

dave.eisen: I remember Obama’s voice breaking during his press conference about it.

kristinpalpini: When I was driving home and heard the total — over 20 dead kids — I just lost it and cried for an hour or two. It really challenged the way I see the world. I was mostly of the belief that people aren’t evil; though they may do evil things for motivations they think are necessary. After Sandy Hook, I was all: Nope, people can just be fucking monsters.

cgoudreau: I actually interviewed one of the former Sandy Hook teachers – Kaitlin Roig-DeBelli, who released a memoir about trying to move on with her life after Sandy Hook. She was speaking at Bay Path University in Longmeadow.

jlevesque: I had to stop listening to the news on that one. I was getting ultra depressed.

dave.eisen: Is there any news that was so good that you remember where you were?

jlevesque: I don’t know about happy times. Hahaha, all i see is bluuuuuuue.

kristinpalpini: Ooo like when Obama was elected. That was a bright spot.

jlevesque: Yes when Obama was Prez for first time I cried over pure excitement. I was super happy.

dave.eisen: I more remember the inauguration speech. I remember seeing him walk down the hall on TV, and how nervous he looked. And how I was bummed I couldn’t be there.

kristinpalpini: I was sitting in my bed, glued to CNN. My husband was asleep, and I remember the joy I felt when it was announced that he would be president. Watching all the people celebrating on TV. It meant a lot to see progress like this.

jlevesque: I was living in my lovely little Cottage Street apartment in Easthampton and I remember I was so amped up I couldn’t sit on the couch. Again, drinking wine and standing an inch away from the TV the whole fucking time.

kristinpalpini: Jen, I have to watch the next election with you.

dave.eisen: Ooh, gay marriage, that was a good one.

kristinpalpini: Marriage equality was a good one … but which time? When Mass. passed it? Or when the Supreme Court upheld it?

jlevesque: Both, amiright?! <3 Yay for marriage equality! That made me happy.

dave.eisen: I was in N.H. when they were getting passed state by state, and I somewhat remember that, but I also remember Obergefell [the plaintiff in the Supreme Court case that led to federal recognition of marriage between two men or two women] on TV getting a call from Obama saying he was proud of him and Obergefell crying with gratitude.

cgoudreau: I was working in East Longmeadow and happened to be scrolling through my Facebook feed, and was pleasantly surprised. It was so shocking how suddenly that decision came about and I was really happy pretty much the rest of the day.

jlevesque: Princess Diana’s death! So sad. She was my hero.

kristinpalpini: I had never heard of her before she died. I remember only learning about her death after her funeral.

cgoudreau: I was 6 and I have a very vague recollection of watching the news with my parents about Princess Diana.

jlevesque: I was at Riverside with my mom and brother and when we got home we had messages on the answering machine about it so we turned on the news and all I remember was crying with my mom at the foot of her bed. I think it’s cause I’m Welsh and she was the Princess of Wales, so in my head I was like, “omg she’s my princess!”  🙁

dave.eisen: I mostly remember how she died right around the same time as Mother Teresa, and that they had worked together.

dave.eisen: There’s a moment in each chat where Kristin takes down a famous person. The last one was Thoreau.

kristinpalpini: I have a lot of weird opinions. For why mom terry ain’t no saint, check out the fine work of Christopher Hitchens.

dave.eisen: I kind of remember Princess Diana, but I really remember the OJ verdict. It was weird because they piped it into my middle school – weird that THAT was the one news event that we got in school.

jlevesque: Yes!! My brother and I were sitting cross legged on the living room floor while we watched the chase of his Bronco. It was surreal and reminded us of an action movie. Super intense.

kristinpalpini: Yeah they had the OJ decision on in my school, too. It was such a hot topic on race and justice in the US and it was crazy how people were trying to talk about it then.

dave.eisen: OK, predictions time — what will the next “where were you when” news item be?

kristinpalpini: Where were you when trump “retired” from office?

dave.eisen: You could almost already ask “where were you when trump basically supported white supremacy”?

kristinpalpini: Ugh, trying not to barf.