Nightcrawler: Ringo’s son assumes throne for The Who 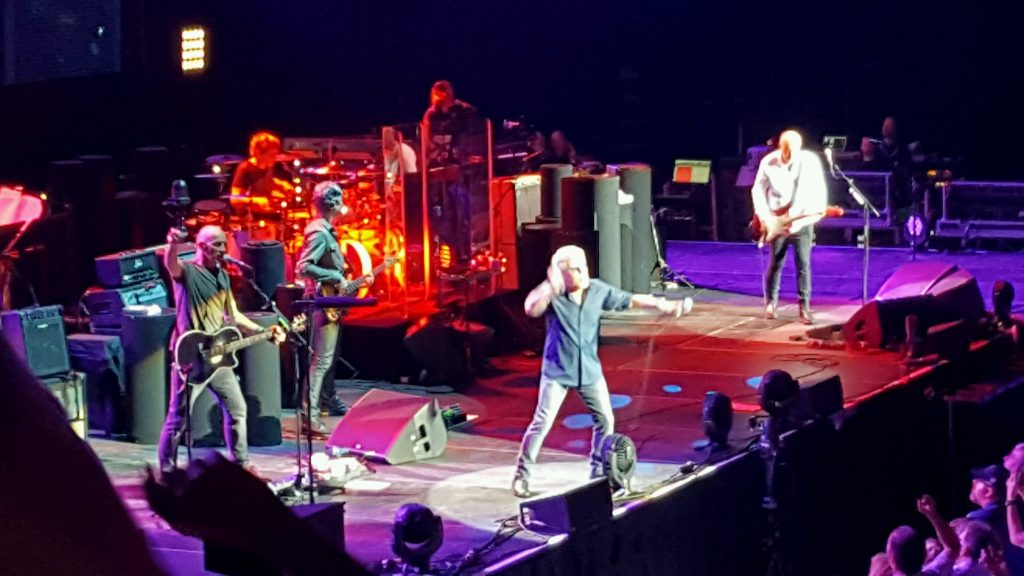 The Who certainly aren’t kids anymore, but the iconic British rockers proved more than alright as they absolutely tore through a 21-tune, hit-laden set before a capacity crowd at Mohegan Sun (mohegansun.com) late last month.

Catalog spanning radio staples like “I Can’t Explain” and “I Can See for Miles” melded seamlessly into “Behind Blue Eyes,” “You Better You Bet,” “My Generation” and Tommy’s “Pinball Wizard” and “Amazing Journey” – adorned with snippets from “Overture” and “It’s A Boy,” proved an amazing, sonic-backdrop for a poignant, video-pastiche of historical footage chronicling world events since The Who’s inception in 1964.  JFK, MLK… Ronald Reagan to Ronald McDonald and beyond..

So the Crawler knows what your thinking. The Who? Who’s left?

The voice, Roger Daltrey, and “the maestro,” Pete Townsend, for starters – which certainly qualifies them to use the name. Speaking of names, Townsend’s brother Simon has been filling in quite capably on rhythm guitar these days. But who can assume that legendary drum throne? When you’re shooting for a (Keith) Moon, it appears you reach for the stars.. or at least, Ringo Starr’s son – and a monster percussionist in his own right – Zak Starkey.

Looking at the extended entertainment forecast, we find veteran six-stringer Santana on the schedule for Aug. 19, Bob Seger  Sept.16 and A Perfect Circle (formed and fronted by Tool’s Maynard James Keenan) Sept. 5. Not to mention two nights to go (Lady) Ga Ga for – Nov. 10 and 11, respectively.

Over at neighboring Foxwoods, it’s a veritable “Daddy Knows Best” fest as Red Rocker Sammy Hagar brings his son, Andrew, to open his Sept. 22 play. He is also bringing John Bonham’s son, Jason, to pound skins for his backing band, which Hagar has dubbed “The Circle.” And wouldn’t you know it, this Circle is rounded out with one Michael Anthony – a former bandmate of Hagar’s in Van Halen – prior to getting ousted by Eddie Van Halen’s son/current Van Halen bassist Wolfgang.

On Saturday, Aug. 26, Foxwoods’ summer-long Battle of the Bands series also concludes at the Atrium with some $10,000 in prize money hanging in the balance. As of press time, NASH, The Noble Impoverished and Secret Lita had already emerged from the sonic fray as finalist. Either the Steve Dunn Band, Old Dog New Trick, James Zap or Righteous Continental will be joining them based on how Aug. 16 goes down.

Closer to home, the Northampton Arts Council revisits its “Rock N’ Roll” Heaven theme for what will be its 27th installment on Tuesday, Aug. 22. The Pines Theater at Look Park will once again play host.

Each August, the Council and the Parent Teacher Organizations of team up to raise funds for arts and enrichment in the schools and for the ArtsEZ program. The premise of the altruistic, audio affair is for local bands to “transperform” into the persona of nationally known bands that fit the style of the season. For example, Transperformance 22’s “Food Group” theme featured the Valley’s own Heather Maloney as Amy Winehouse. For “Off The Map: Transperformance 24” Colorway assumed the role of Boston.

The “Rock N Roll Heaven” concept was first conceived in 1994. Given the slew of high profile passings in the recent months, the powers that be thought a sequel was finally in order.

Slated to perform this year’s fete are King Radio assuming the role of The Zombies, Outer Stylie reworking Soundgarden, Glad Machine trying their hand Stone Temple Pilots and The Winterpills as George Harrison, to name a choice few.

Tickets are $10 for adults, $5 for children 12 and under and $8 for seniors and veterans

Last up, since we’re knockin’ on heaven’s door… perhaps St. Peter would be kind enough to let the Crawler in so he could say goodbye to an old friend. Like many, the Crawler was equal parts shocked an saddened to learn of the recent passing of J. Scott “Bow Bow” Brandon a few weeks back. Always an entertaining interview, Bow had often checked in with updates from his many, musical projects – the most high profile of course his years of service with the Drunk Stuntmen.

True to form, the scene came together to celebrate the life of the beloved bassist Aug. 6 at the Iron Horse.

“It was an unforgettable night last night,” journaled scene stalwart Henning Ohlenbusch. “A reminder of the fragility and resilience of a community that is bound by music.