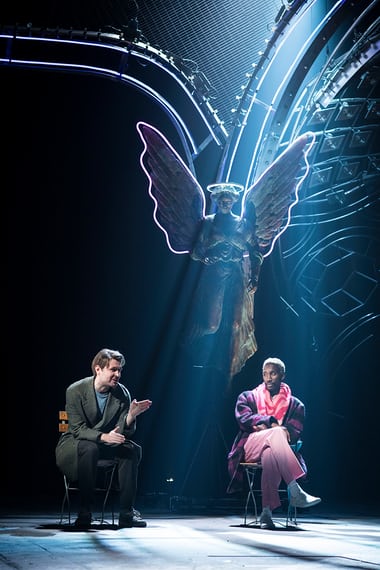 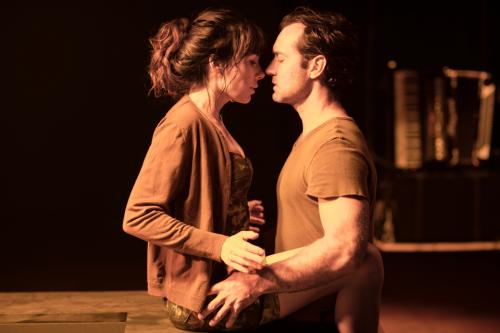 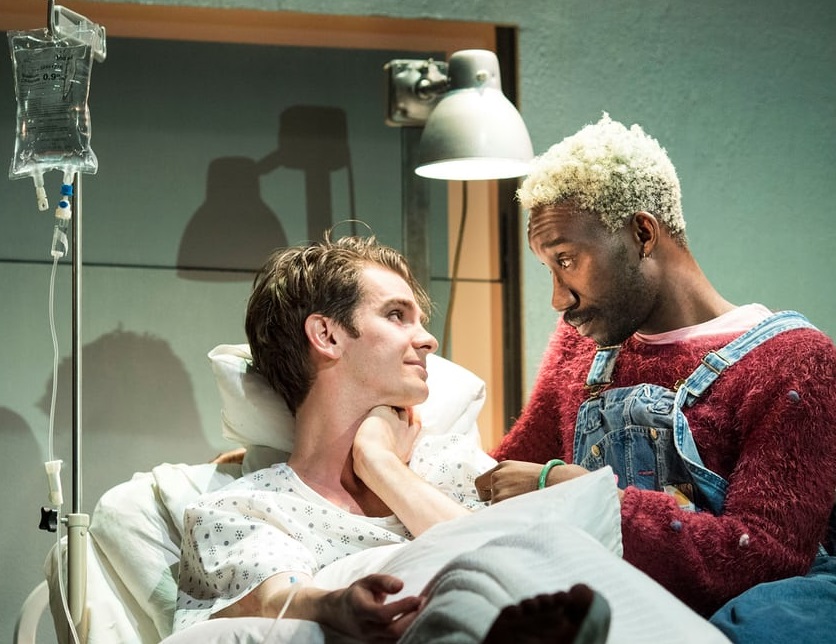 If there is a genuine epic in American drama −  its ideas as expansive as its scope −  it is surely Angels in America, Tony Kushner’s two-part, eight-hour “gay fantasia on national themes.” And if there is a consummate example of cross-disciplinary provenance on the English-speaking stage these days, it must be Obsession, the London production of a Dutch adaptation of an Italian movie version of an American novel.

Both shows share this summer’s NT Live lineup of HD broadcasts courtesy of Britain’s National Theatre, playing this month and next at the Amherst Cinema. Part One of Angels in America, “Millennium Approaches,” plays this Saturday, Aug. 19, followed by Part Two, “Perestroika,” on the 21st and 26th. Obsession follows with two screenings on Sept. 11 and 23.

Kushner’s masterwork, now a quarter-century old, seems newly relevant today. It takes place in the 1980s, when AIDS was finally being recognized as a full-blown crisis, but in some quarters denied or ignored, including in the Reagan White House. Indeed, the play’s topicality achieves added relevance right now, considering that one of the characters in its mix of fictional and historical figures is the real-life political hit man (and homophobic homosexual) Roy Cohn, who was a mentor to Donald Trump. 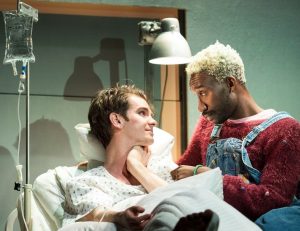 In the current National Theatre production, staged by the ever-inventive Marianne Elliott (War Horse), Cohn is played by Nathan Lane (The Producers), whose performance was praised by one critic as “magnetic … creating a figure who is part predator, part patriarch but, above all, a victim of his own sad delusions,” though Lane’s roly-poly frame hardly jibes with Cohn’s dark, lean malevolence.

At the center of the play’s multiple plot threads is Prior Walter, who is dying of AIDS, one of the few characters who’s not trying to fool himself. He’s played by another box-office draw, Andrew Garfield (The Social Network, Spiderman) who “excellently combines a head-tossing, period-style camp with the desperate anguish of a man craving love in his hour of need.”

Other figures in the sprawling narrative include the ghost of Ethel Rosenberg, one of Cohn’s victims in his Red-scare period, who sits at Cohn’s deathbed having the last laugh; a Mormon couple struggling with the dawning recognition that he is gay; and of course, an angel, who crashes into the action with a God-is-fed-up message for humanity.

James Cain’s 1934 novella The Postman Always Rings Twice has been adapted for the screen several times, most famously in 1946, in what is now considered a classic of film noir, and most influentially in 1942 by Luchino Visconti, in what is now considered a paradigm of Italian neorealism, Ossessione. It’s that version that auteur Ivo van Hove brought to the stage of London’s Barbican performing arts center this spring, starring Halina Reijn, a star of his Amsterdam-based Toneelgoep ensemble, and − the box-office draw here − Jude Law.

Where Visconti transferred Cain’s setting from rural California to rural Italy while retaining its steamy sexuality and edgy terror, Van Hove has retained Visconti’s vision and setting (the script is faithfully transcribed from the screenplay, with some name changes) while stripping away its realism. This is a van Hove trademark − stark, bare stages inhabited by explosive emotions, as in his previous works presented by NT Live, Miller’s A View from the Bridge and Ibsen’s Hedda Gabler.

Jan Versweyveld’s abstract setting is occupied by a few sy 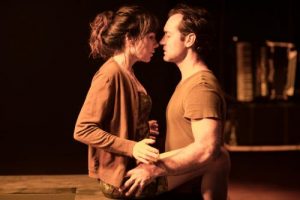 mbolic props, most noticeably (and symbolically) a greasy car engine dangling from the roof. But its cinematic origins are recalled with video projections on the bare walls and an eclectic soundscape that ranges from La Traviata to The Boss.

Law plays Gino, a hunky drifter who drifts into the roadside café owned by a boorish bully and his young, discontented wife. An instant, electric attraction between sexy newcomer and love-starved wife leads to a plot to kill her husband, followed by a series of twists, the final one a fatal irony.

Most of the reviews of the London production were mixed, with bravos for the stars. It was called “a thriller played out in slow-motion,” “a psychological study in erotic obsession but with none of Visconti’s atmospheric detail.” Law, one critic noted, is “muscular, moody and very good at conveying the brooding guilt that follows the story’s pivotal murder,” while Reijn “starts with the right air of anguished solitude, is quickened into life by the presence of the charismatic stranger, and later sets about reordering her existence with a conscienceless practicality.… For a moment, I saw the couple as a modern version of the Macbeths.”