The Button Lady: Wearing Dissent on Your Sleeve 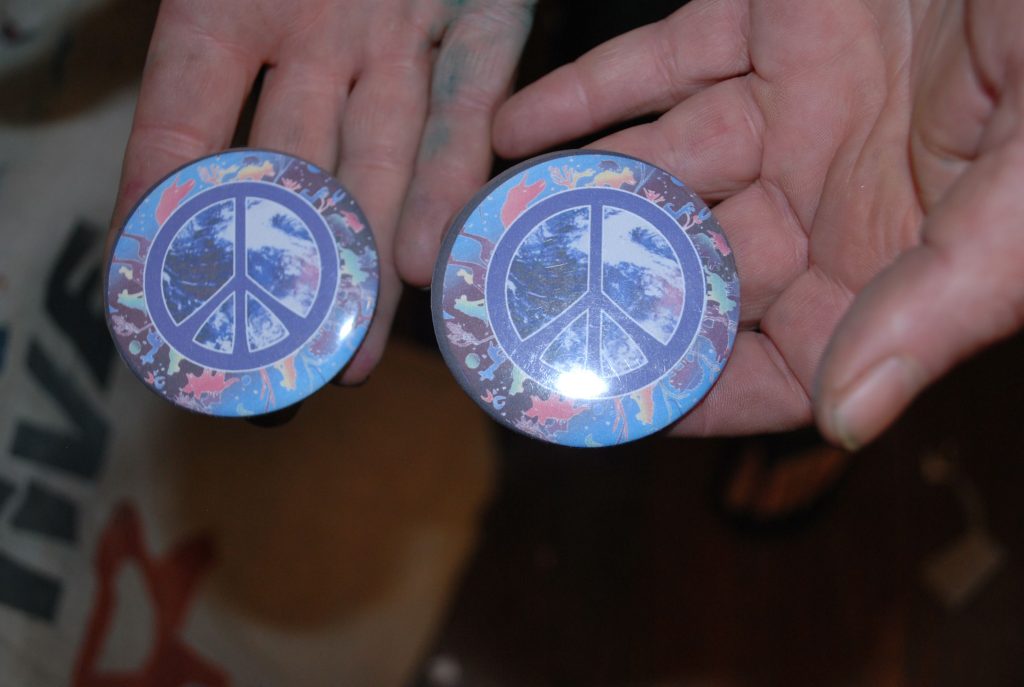 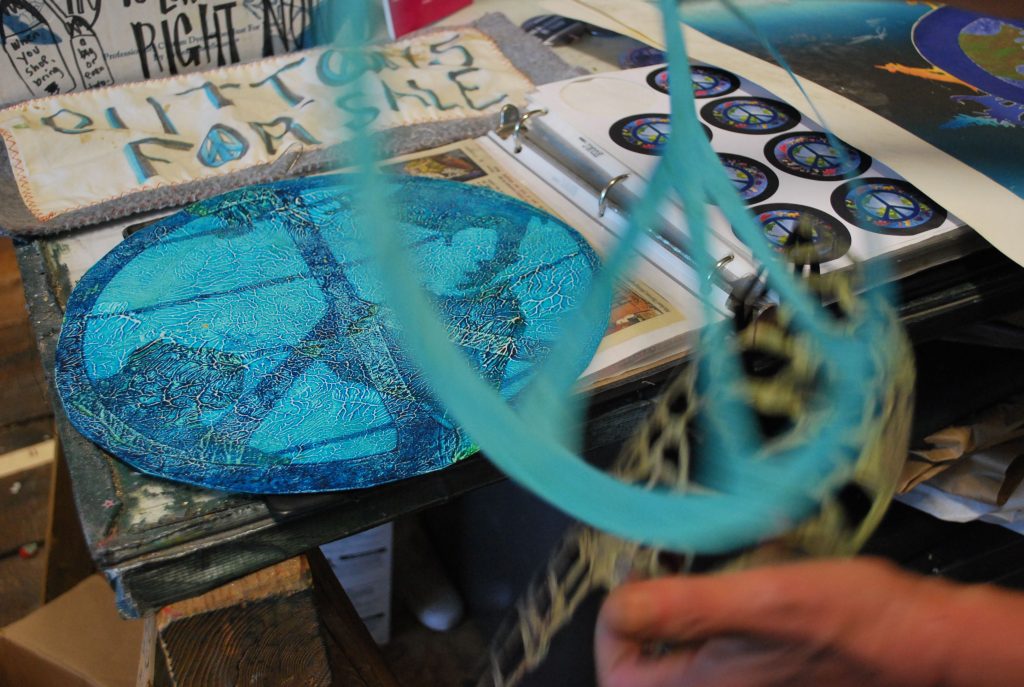 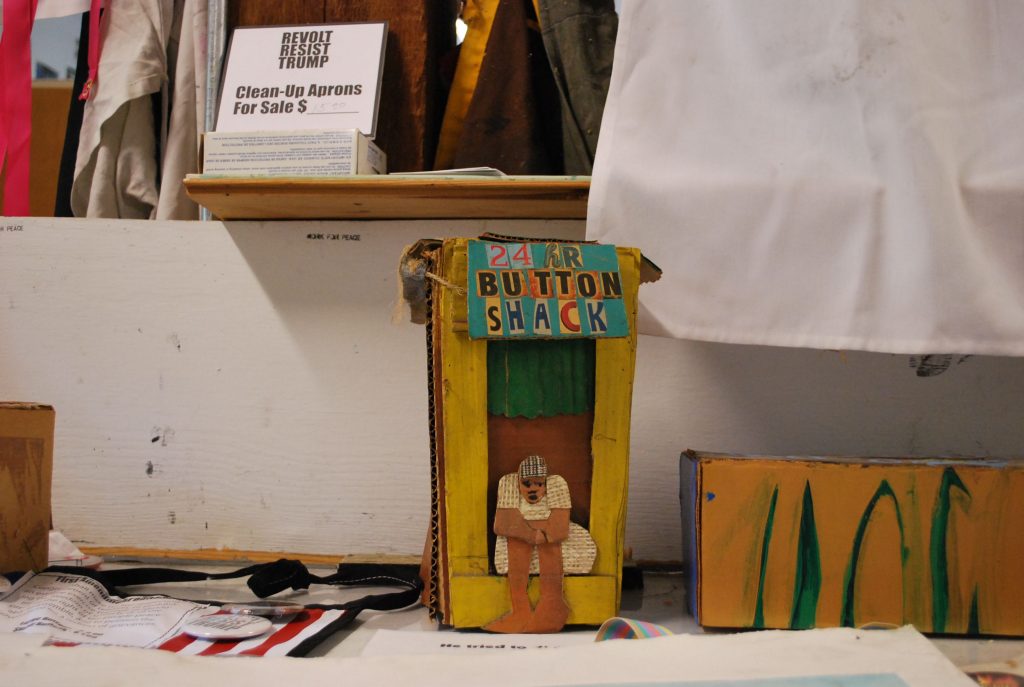 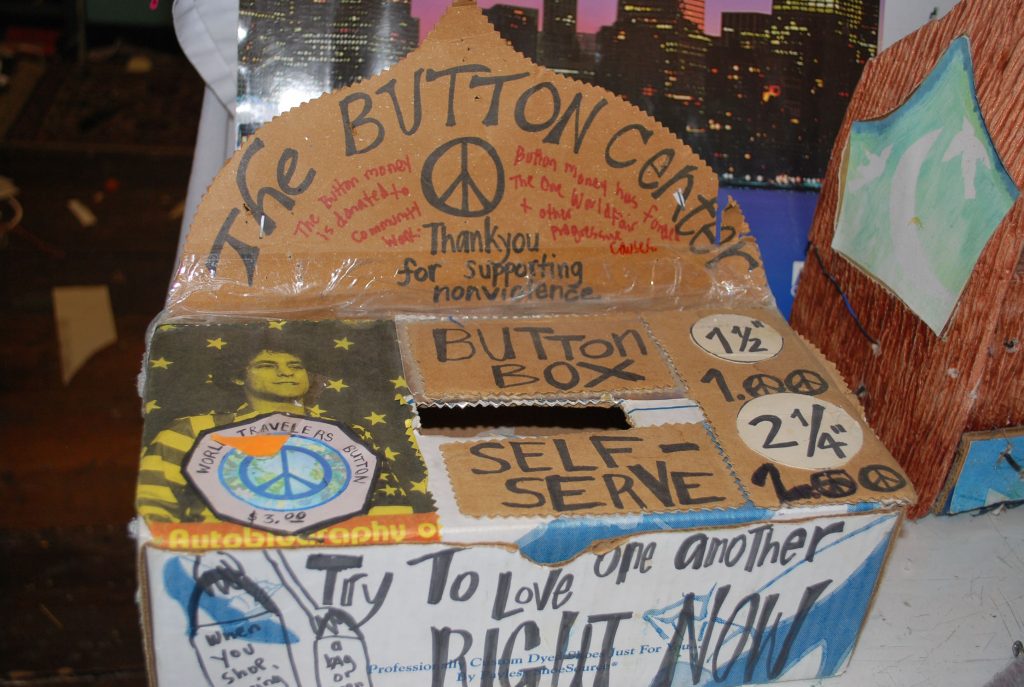 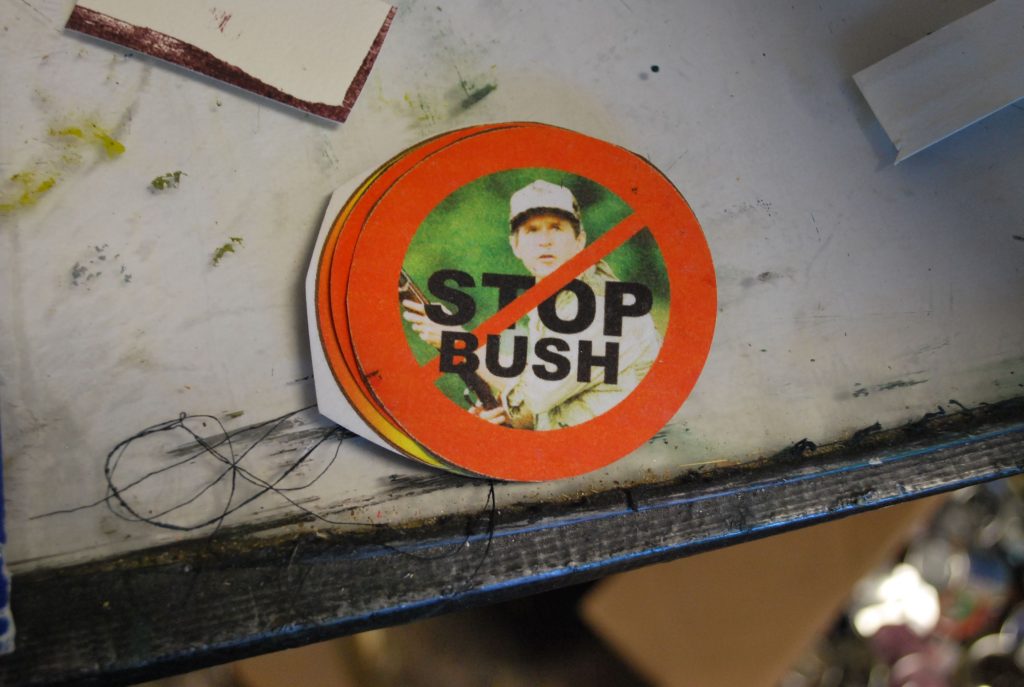 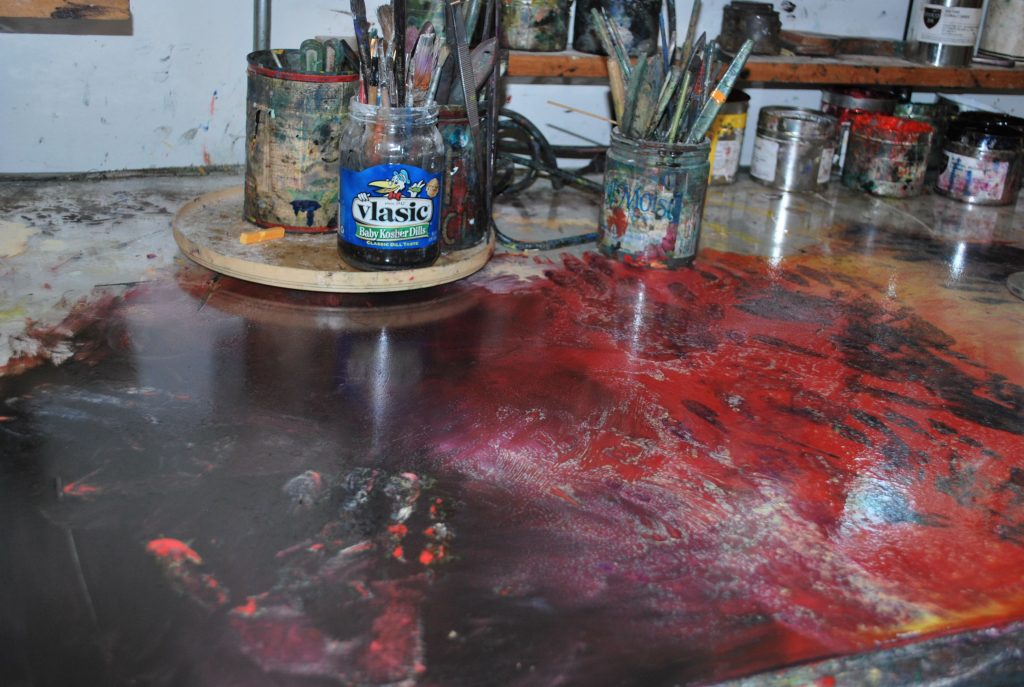 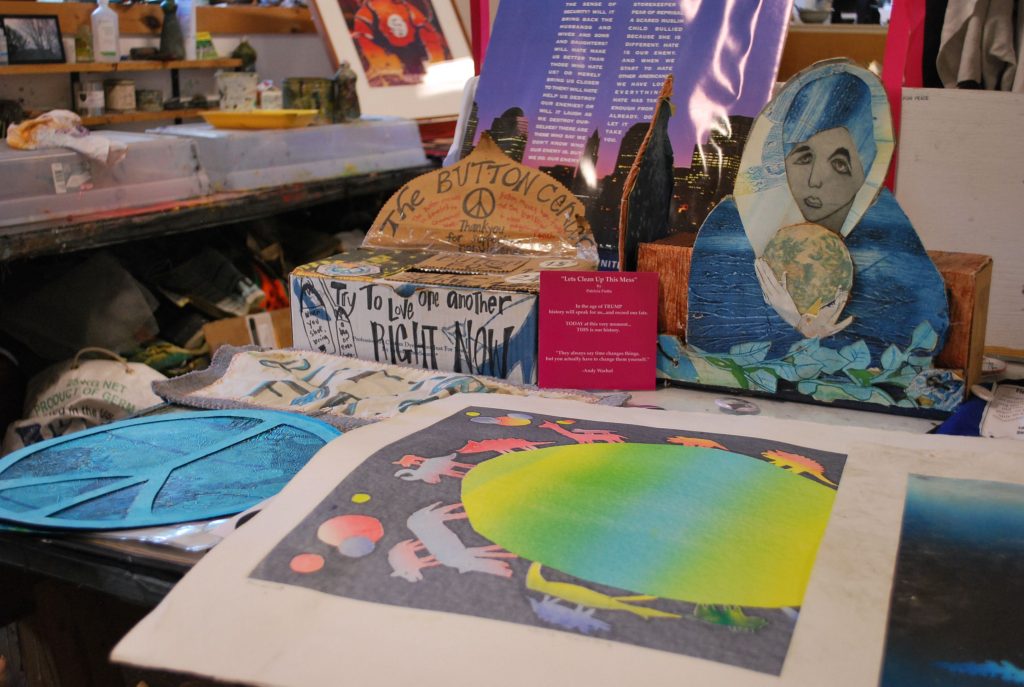 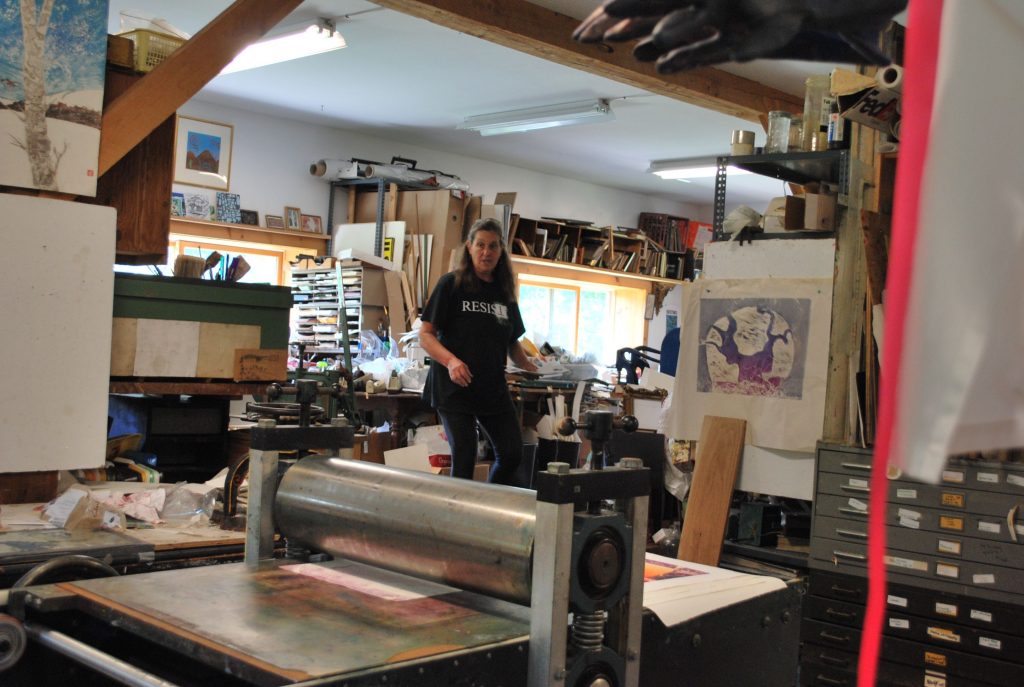 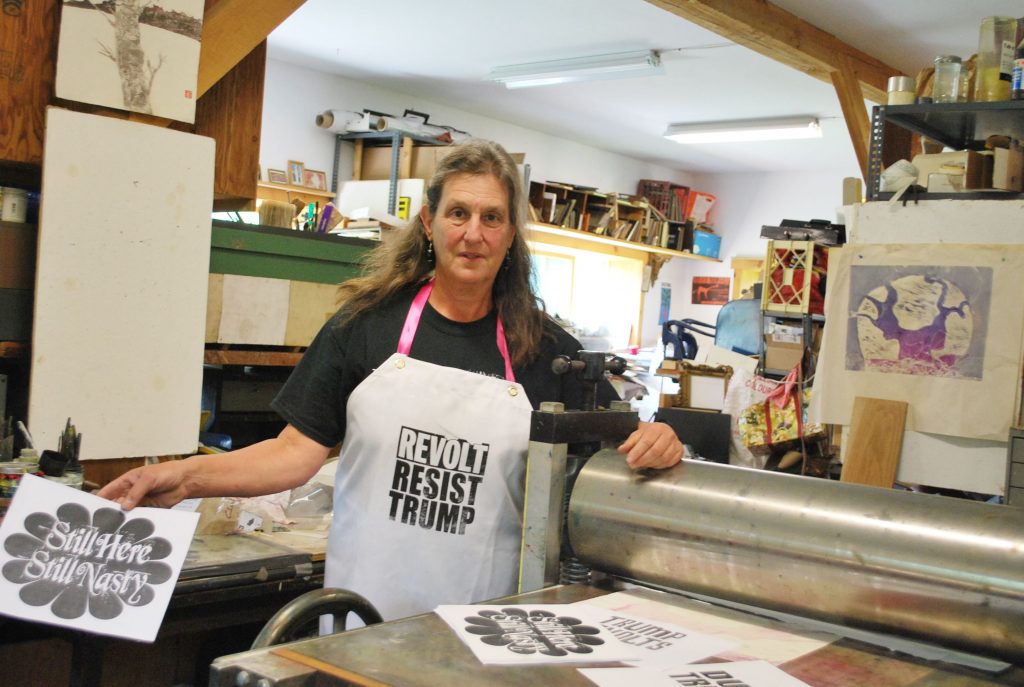 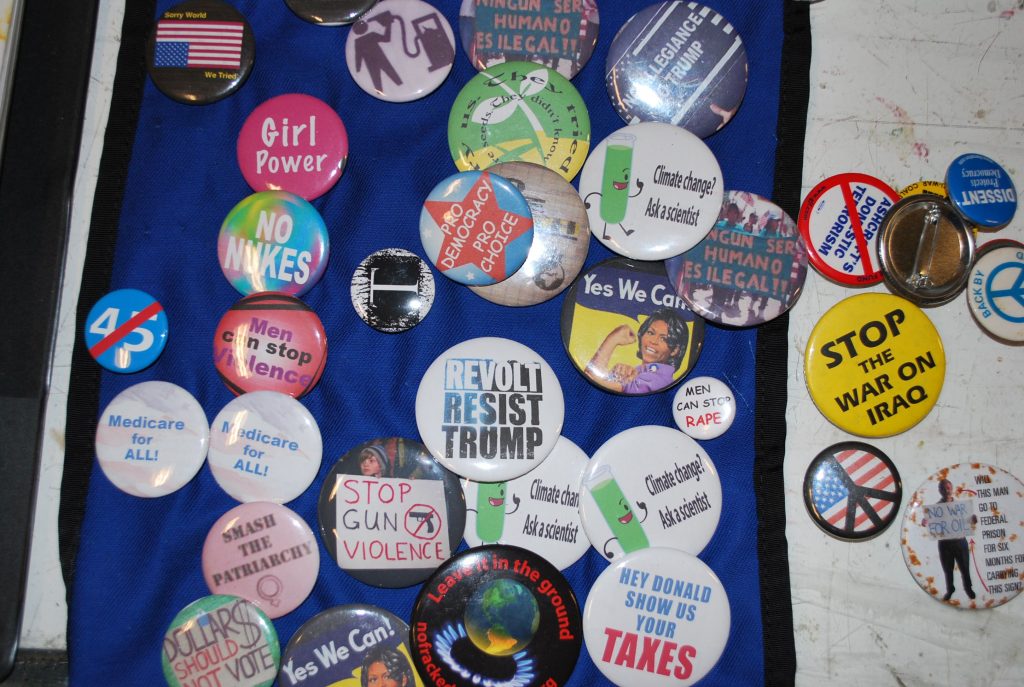 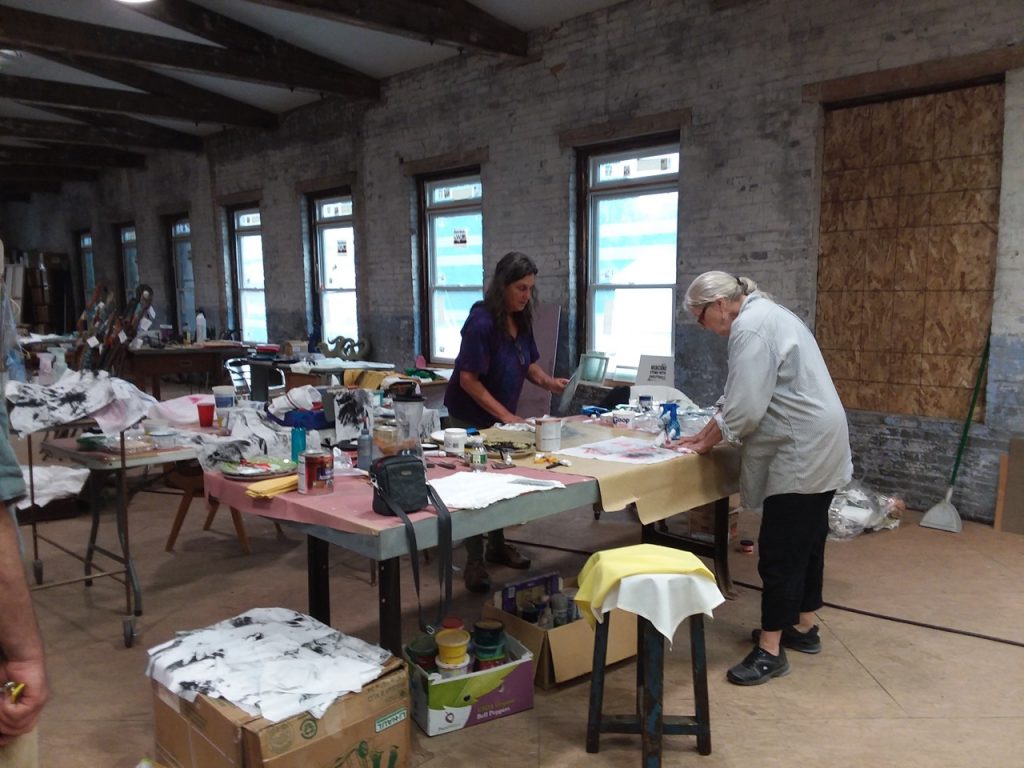 Print artist Leni Fried is standing over a silk-screen printer flipping through a stack of stencils of peace signs and words such as “nasty,” “peace,” and “freedom,” but she’s looking for the stencil she uses most often these days: “RESIST.”

Fried, a printmaker and co-founder of the Adams-based BagShare Project to reduce plastic shopping bag waste, has been putting the word on anything she can lately. It appears on T-shirts (including the one she is wearing today), aprons, flags, art of all kind — and especially buttons. 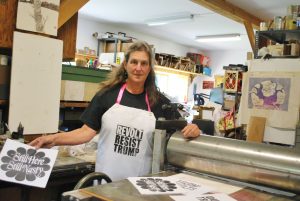 Fried, of Cummington, is pissed at the war and violence perpetrated by the U.S. She hates the erosion of civil rights, including voting suppression — and she wants everyone to know it.

“Have it out there in the world. Don’t be neutral; say what you feel,” Fried says.

Silence, she explains, is no longer a political option for Americans: Too many upsetting actions are being done in the name of the U.S. People need to voice their dissent or risk being lumped in with assholes who support causes such as white nationalism and persecuting members of the LGBTQI community.

While keeping quiet isn’t an option, talking all the time isn’t really one either, so Fried sought to express her political views and support for marginalized people by wearing her stance on her sleeve. She wanted accessories and clothes that make a statement, but she was hard pressed to find any. 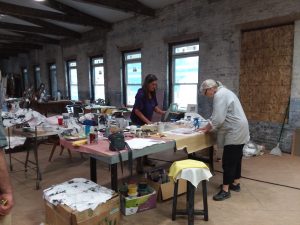 To fill this void, this summer, Fried, along with graphic artist Pat Fietta, of Adams, launched ResistWares.com. You may have seen their work: Fietta is the one who designed the “Revolt Resist Trump” logo that’s been popping up around the Valley. The mission of the online shop is simple: “When you appear silent, you are complicit.” Don’t do that.

The response has been largely positive. ResistWares had a stand outside the Elusie Gallery in Easthampton during the While Art is Still Legal show in July.

But not everyone is thrilled with the wearable protest art.

“What I’ve heard [from people] is that this is a really important time to be doing this,” Fietta says in a telephone interview. “A lot of people, I think, are maybe frightened to put something on — I mean there is a backlash happening.”

Pushback Against The Button Resistance 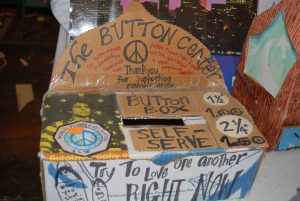 While ResistWare is new, Fried has been making wearable political statements for more than 15 years by way of buttons. They don’t call Fried The Button Lady, for nothing. Her workshop is filled with swaths of pin-able buttons on fabric and deep boxes of duds. They’re all wonderfully confrontational without being insulting. Fried’s scores of button designs include a picture of Michelle Obama as Rosie the Riveter with a “Yes We Can” across the top, a heart studded proclamation that “I Love Pro-Choice Boys” and others that feature slogans such as: “Stop the War Before it Starts,” “Dissent Is Patriotic” and “God Forgive America.”

One of the first places to sell Fried’s buttons was The Old Creamery Co-op in Cummington. But a recent incident ended that 16-year relationship.

This summer The Creamery received a complaint and threat of a boycott over the political button display.

“We’re a co-op owned by 745 members of the community and they all have different views,” manager Michael Kalagher says in a telephone interview. “Post election we got a complaint, so we took down some of the more blatant anti- Trump ones.” 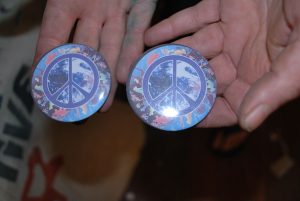 Fried wrote a disclaimer to go with the buttons noting that the views expressed by the pieces weren’t those of the co-op, but two weeks later the buttons were stolen and someone had taken down two Black Lives Matter signs, Fried says.

Fried didn’t restock the buttons after that due to worker safety concerns.

“That was the first time that ever happened,” she says.

Right now, people can find Fried’s buttons at some concerts, Dottie’s Cafe in Pittsfield, and Paradise Copies in Northampton, but they used to be available at Cup and Top in Florence (which closed in July), and several other places that “first accepted them, but now they’re too nervous,” she says.

“I’m not sure what to do. I need more places for my buttons.”

A Chronicle Of Dissent 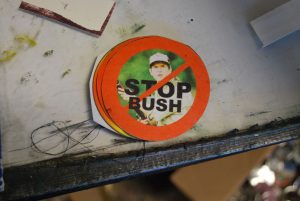 Fried’s most famous button is perhaps her most straightforward: a picture of George W. Bush in his hunting gear and stamped over him is a bright orange “no” symbol and the words “STOP BUSH.” She’s sold 10,000 of them, she says.

Fried says she gets her inspiration for the buttons from the largely anti-war political rallies and marches she attends. If she sees a sign she likes, she’ll snap a photo and turn it into a button.

She’s using her button project to document protests and help spread other people’s messages, not just her own.

“I want to chronicle dissent. It doesn’t matter if I thought of it. I want these to be all about the people and the marches,” she says. “I don’t make money on the buttons. I give it to the resistance.” 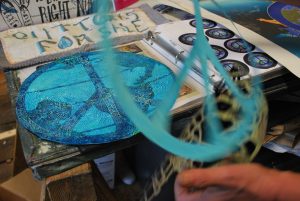 In her studio, Fried picks up a couple of her favorites: an environmental peace sign, and a figure of a man holding a gasoline nozzle to his head like a gun. “We have to stop using fossil fuel,” she says shaking her head.

The buttons sell for $1-$2 each and the money goes to support organizations such as the American Civil Liberties Union and Planned Parenthood, Fried says. For the most part, the buttons are sold on the honor system via “button boxes” Fried designs and installs at just about any location that will have them. They’re also available online through ResistWares.

A New Way To Express Anger 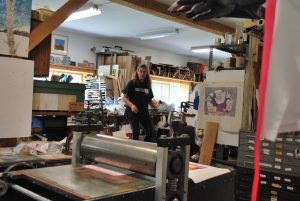 Fried, who grew up in Maryland, found her passion for art when she was young and wrote poetry. Eventually the confines of words weren’t allowing her to express her frustration and anger with the world around her accurately, so she decided to use her pen in a new way.

“I’d get in trouble because this is all I’d do,” she says flipping through detailed, psychedelic collages drawn in pen. She went to art school at the Pratt Institute in Brooklyn where she was introduced to printmaking and she hasn’t looked back. Fried enjoys the process of printmaking, creating stencils and stamps, changing them slightly to highlight or hide pieces of the work, and watching the whole thing develop.

“As soon as I started printmaking I loved it, you can see all the different stages in the images,” she says. “It’s a technical challenge.”

Fried purchased her press, the same one she still uses, 30 years ago for $5,000. “I bought it before I bought a car,” she says. “It’s important that artists invest in tools. We need to resist, and the fundamental message of most movements doesn’t go anywhere if they can’t get access to tools and share it.” 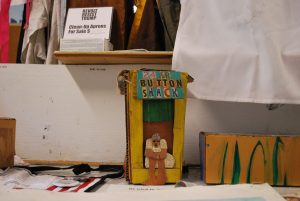 But Fried didn’t start using her artistic skills politically until 9/11.

“I was against wars and such, but I wasn’t as involved — I wasn’t reading the newspapers,” she says. “After the attack, I was so upset, I wanted to react and I felt so isolated in that reaction … There was a hush over everything; you could not disagree with the president, and people were afraid.”

Fried says the attack disoriented her for six months, and she didn’t create anything during that time. When she came out of this period of reflection in the spring of 2002, she started the Hilltown Nonviolence Study Group, which met at the Old Creamery Co-op and did things like read and discuss an autobiography of Martin Luther King and talk about ways to promote nonviolence. The group was active for several years, holding meetings once a week. It was from this group and the members’ desire to spread their peaceful message, that Fried came up with the button project. 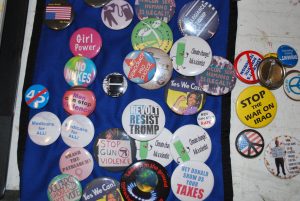 “It gave people a way to speak out,” she says. “It was the first place I could talk about these things. It was an outlet and that started the whole make-buttons thing.

“I wanted to normalize dissent. Now, you can buy a button and wear it for everyone to see.”

The art of print and button making is something Fried is passing on to anyone interested. She holds “drop in” classes at her Cummington studio Tuesdays or Thursdays, starting around 6 or 7 p.m., each week. No prior art experience is necessary, but she does ask that people who want to attend call or email ahead of time (413) 634-5591, lenifriedprintmaking.com. Drop in sessions are $30 each.