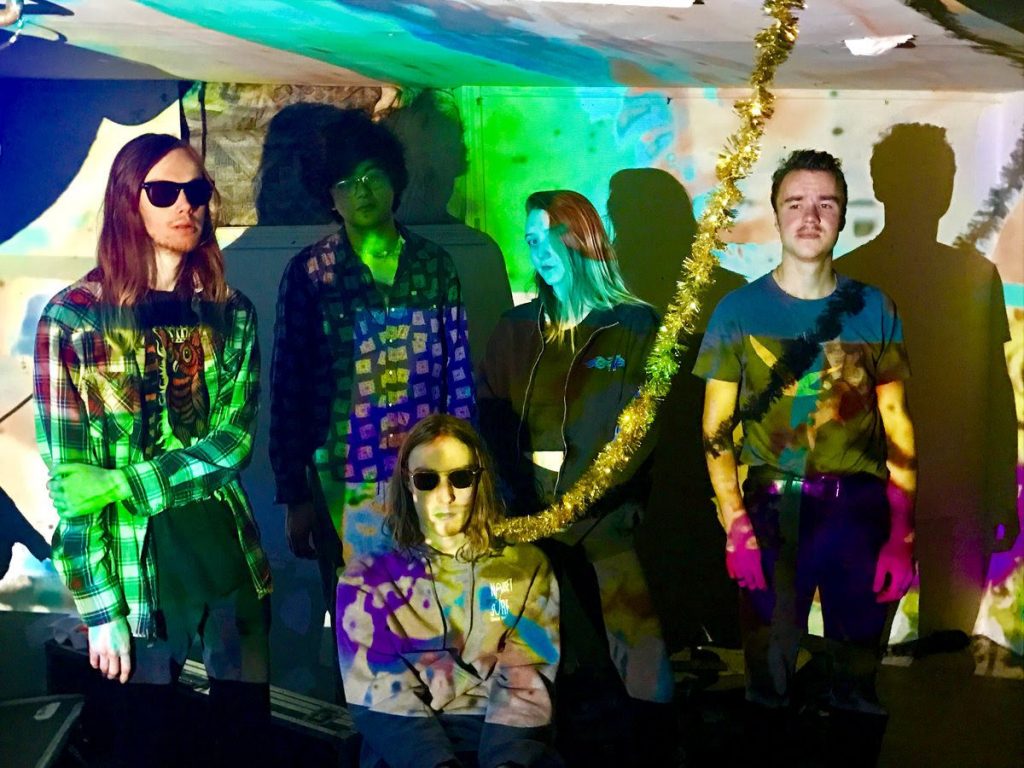 I kept hearing that Ian (Thee Arcadians) and Androo (ex-Spirit Ghost, Nancy Drool) would disappear into different basements and jam on one chord for hours at a time.

The roommates tolerated it (within reason), the neighbors were never “chill” to begin with. But that did not deter them. They were riding a wave — or something like that.

It wasn’t long before a rotating cast of DIY allstars — including, but likely not limited to, Nina (Carinae, ex-Who ‘Da Funk It?), Jay (Dust Witch), Zoe, Sara (Wishbone Zoe), Jeff (Kindling, Grist), Nico (Thee Arcadians), Mia, John (Weeed) — were recruited and, one by one, dissolved into this collective single chord, a psych soup of sorts. Together they formed Experimental Audio Damage & The Research Control Groop.

And there’s good news: A fresh batch of demos are up on bandcamp, waiting to be discovered. ’Droo’s guitar oozes with wah as it soars over the thick krautrock, laced with something good. The songs — jams? — range from 6-16 minutes; but the more you think about time, the less likely you are to get lost in it, which is certainly the desired effect. I’ve seen them a handful of times now, and this has certainly happened to me — even without drugs!

On their aforementioned Bandcamp page, there are a handful of testimonials, which are so flattering it’s hard to take them at face value. Are they from the band? Their friends? A (fictional?) music critic named Roger McCorman? Does it matter? I’ve included a bit of McCorman’s statement here:

“Eccentrics! Freaks! All you beautiful, fucked-up psychedelic children of this world! Stand back as we unfold …The Experimental Audio Damage Research Control Groop!

“These psychedelic freaks are just the latest craze to warp the minds of the local scene. Encouraging attendees of their concerts to take psychedelic drugs before the gigs, it begs to ask the question; how much longer will it be until a cult of psychedelic freaks wearing sunglasses with Spacemen 3 back patches completely takes over this whole town?!

“For fans of Neu! Stereolab, Acid Mothers Temple, Spacemen 3, Loop … Your psychedelic prayers have been answered! Tune in, drop out, turn off your mind, and let the sound surround you!

“ But don’t just take it from me, here are just a few of the many things people are saying about Volume One!

“ ‘I knew who I was before their set, but by the end I questioned exactly what I was doing with my life. The next day, I quit my job, bought a pair of sunglasses, and decided to learn the sitar.’ ”

Whether or not these quotes are real is besides the point. The psychedelic vibes are — and not to be tiptoed around. Watch: the town just might get overrun with freaks wearing sunglasses and Spaceman 3 back patches on their flannels and denim.

Note: Experimental Audio Damage will likely change its name to “Phenomena 256” in the near future as their current name is similar to another artist.