How does a stadium-filling rock band follow up its most ambitious album ever? In the case of the Foo Fighters, the answer is by achieving rebellion through an embrace of normalcy.

Whereas the recording of 2014’s Sonic Highways took place in eight different studios across eight different cities nationwide, the recording of the Foo’s ninth studio album took place in just a single location, EastWest Studios, in California. Inside the same walls that witnessed the creation of the Beach Boys’ Pet Sounds, Dave Grohl and company committed to making their first record inside a commercial studio since 2002, a choice that appears almost pedestrian when compared to the previous road-tripping project.

However, to keep matters somewhat unpredictable, the band joined forces with new producer, Greg Kurstin, this time around, instead of bringing back trusted hand Butch Vig, who helmed the Foo’s previous two albums. Kurstin, known for his work with Adele, Sia and other more pop-leaning artists, first came across Grohl’s radar because of his membership in indie pop duo The Bird and the Bee, whose other member, Inara George, contributed vocals to Concrete and Gold.

Together, Kurstin and the Foos decided to craft, “Motorhead’s version of Sgt. Pepper…or something like that,” according to Grohl. And for those imagining a universe of noise mashed with patches of psychedelia, the ensuing result is not far removed from such a statement.

Opening track, “T-Shirt” doesn’t wait long to announce itself. Beginning with Grohl singing a soft plea over simple acoustic guitar, the song explodes out of the speakers at the 30 second mark. A giant chorus of layered vocals provides the backdrop for hammering drums and what sounds like a wall of guitars before a return is made to the quieter intro for the closing seconds.

A similar pattern emerges on the album’s next number and first single “Run.” Familiar picked notes underscore Grohl’s gentle urge for listener’s to “wake up” and “run for your life with me.” Then the drums come in, pounding an insistent beat as Grohl’s singing grows more stressed. This, of course, is before all hell breaks loose. Suddenly the song’s speed shifts into overdrive and Groh’s feral hardcore screaming rides atop a churning metal-like frenzy. Just as suddenly a return is made to the slower rhythm, and one can easily picture the track’s back and forth nature playing out before a live audience – all mayhem and head banging interspersed with moments of appreciative swaying as revelers catch their breath.

After such a pummeling, the ‘70s rock-inspired “Make It Right” seems downright tame by comparison. Garage guitars crunch out a repeating riff as lyrics about a “train to nowhere” share time with declarations of not needing another martyr. Pop superstar Justin Timberlake adds backing vocals, apparently as a result of Grohl’s chance meeting with the singer at the studio, but you’d have to check out the liner notes to confirm such a fact as his contribution is just one piece of a stacked mix.

A heavy mix of layered vocals, harmonies and arrangements, throughout multiple tracks, appears to resemble what Grohl’s vision for this record was inside his head all along. The partnership with Kurstin allows for many of these touches to be fleshed out, so too does the inclusion of guests like Timberlake, as well as singer Shawn Stockman of Boyz II Men fame, who lends his vocals to Concrete and Gold’s title number.

Perhaps no guest looms larger though than Paul McCartney, who unexpectedly mans the skins for the Taylor Hawkins vocal turn “Sunday Rain.” The story goes that Macca wanted to borrow Kurstin for some work in the middle of the Foo’s recording sessions, so Grohl pulled the former Beatle into the studio. Hawkins’ raspy singing provides a nice change up from Grohl’s throatier howling, and suits the song’s shaggy jam-like feel. With a running time of six-plus minutes there’s plenty of time for the tune to wander off and find itself again. As for the inclusion of some random piano noodling at the end of the track, the explanation is anyone’s guess. 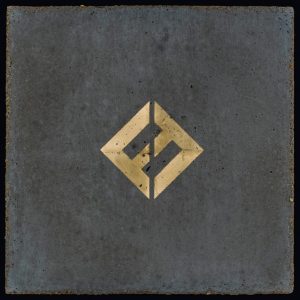 No explanations are required for two other Concrete and Gold highlights. Second single “The Sky Is a Neighborhood” marries a plodding beat to sighing backing vocals and a rhythm reminiscent of a forgotten nursery rhyme. Every chorus of “banging on the ceiling” brings to mind the classic image of a parent wishing their child would just “keep it down” upstairs, but the song manages enough odes to heaven above to perhaps strive for something more constellation-inspired, an idea explored more fully by its Grohl-directed video starring his two daughters Violet and Harper.

“The Line” finds the Foo Fighters in full-on anthem mode. The song is already popping up as the soundtrack for major league baseball promos on television, and seems ready-made for future stadium sing-alongs. “Are you there?” Grohl sings over driving power chords and shimmering single notes. “Everything is on the line this time.” A likely candidate as any if the band decides to release a third single, the song is melodic without relying on variations in speed and tone and doesn’t overstay its welcome, possessing the second shortest running time on the album.

Every great record needs a fitting finale, and Concrete and Gold’s title cut suffices in spades. Starting with a menacing opening crawl, the song lurches from the gate with distorted guitars and restrained drums before artfully deploying Stockman’s aforementioned vocals as dramatic mountains of noise. Time is made for an interlude featuring sounds that wouldn’t be out of place on a broadcast to distant planets, but the track’s status as a budding epic is sealed by its echoed guitar strums and rising harmonies. Harkening back to Grohl’s claim that this is his take on “Motorhead’s version of Sgt. Pepper,” the song even ends on a sudden sustained blast that fades out over the final minute, leaving just one mystery – who’s Darrell*, and what did he do to merit the “Fuck you” hurled his way in the album’s closing seconds?

For more information on the Foo Fighters please visit www.foofighters.com.

* A likely candidate is Darrell Thorp, who mixed and helped master the record.