Stagestruck: Culture Clashes on the Border and on the Island 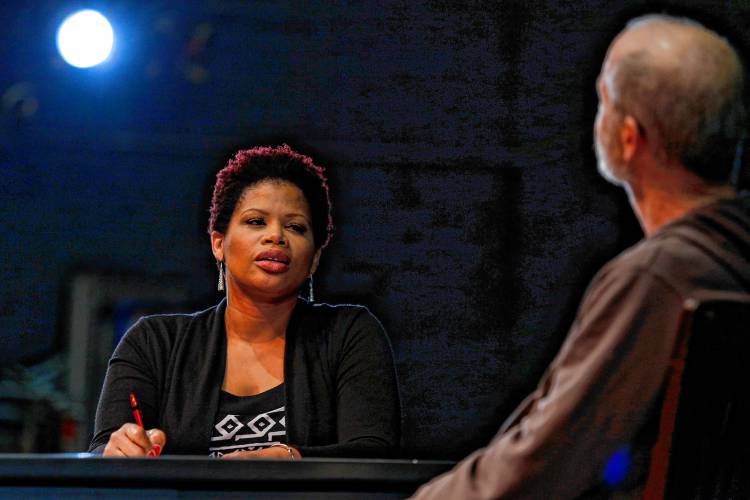 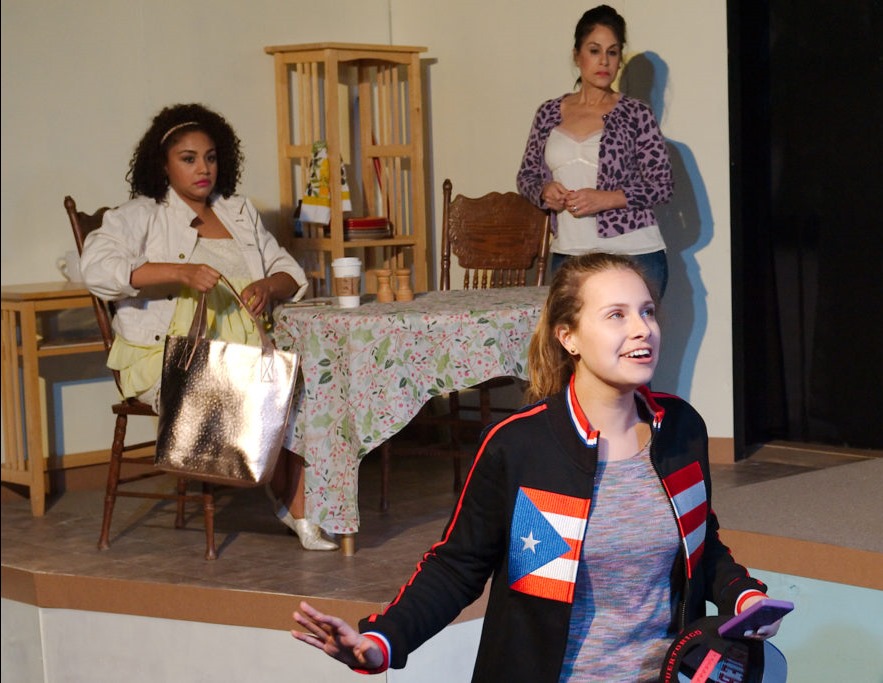 Two plays in the Valley this weekend couldn’t be more different but at the same time so close to the bone of our current national  crisis of xenophobia and identity. Building the Wall, in Northampton, is a tense confrontation that touches on today’s headlines and then reaches beyond them. La Gringa, in Holyoke, is an unabashed comedy about a Puerto Rican woman caught between two homelands.

Building the Wall (the very title sends chills) finds two people in a prison meeting room in El Paso. Rick is a white man dressed in penitentiary orange, Gloria an African-American woman with a briefcase full of notes and documents. Rick has been convicted of a capital offense and Gloria, a history professor, has come to interview him, in order to “maybe help us all understand” what happened.

The brief two-hander is half over before we find out just what did happen, as the duo engage in mutual suspicion and rehash a lot of recent history. Eventually we realize that we’re in a near future that is a horrifically logical outcome of things that are happening now. The specific reference in the title doesn’t come until the very last line, and it’s not what you’d expect.

This what-if fantasy was written by Pulitzer and Tony winner Robert Schenkkan during last year’s presidential election in response to Donald Trump’s rabble-rousing statements on immigration. This weekend’s performances, directed by Sheila Siragusa and featuring Shannon Lamb and Sam Rush, kick off a season of original productions at the Academy of Music.

Debra J’Anthony, the Academy’s executive director, told me that “this work offers us an avenue to question our preconceptions about others and the decisions we make, at times, against our own values and compass.”

For Siragusa, the Northampton outing offers “a wonderful opportunity to be present for this deeply polarized conversation about our country, in a way that is rarely possible for many of us in our lives, whether it be because we don’t have access to people with such radically opposing viewpoints or that we do and choose not to ruin relationships over it.”

The two characters, coming from widely different backgrounds and mindsets, eventually begin listening to each other, and both Siragusa and her actors hope the play does the same thing for the audience. (You can get their takes on it here.)

“It’s easy to reject the idea that listening is needed in this moment,” Siragusa told me, “but I can hardly deny − especially as a theatre maker − that understanding the actions of others is key to resolution. This play provides us with an opportunity to listen, free of the conflict that arises around our own response and participation in the conversation.”

Building the Wall is an intimate drama, and it’s performed intimately, with the audience seated on the Academy’s stage along with the actors. That means that space is limited, and reservations are advised. Visit aomtheatre.com to do that. Tickets $22 plus fees; performances are Thursday-Saturday Sept. 22-23 at 7:30 and Sunday at 2:00.

In Carmen Rivera’s Obie-winning comedy, María, a young New Yorker, goes to Puerto Rico to connect with her extended family. Although this is her first visit, she feels intimately tied to the island by blood and heritage, even majoring in Puerto Rican Studies in college. But while she considers herself a Puerto Rican − and has the taunts and insults she’s received stateside as evidence − the native islanders see her as a gringa, a nordamericana who has no business considering herself puertoricaña. 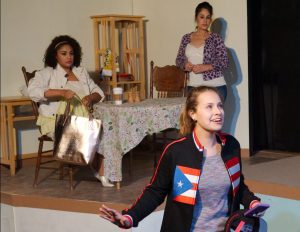 This state of affairs understandably provokes a severe identity crisis. If she’s a Puerto Rican at home but not in her homeland, who is she and where does she belong? The crisis, though, plays out not in heartrending drama but through a series of uproarious misperceptions on both sides, producing what The New York Times called “90 minutes of laughter.”

The playwright’s comedic approach to what is indeed a serious subject is part of a tradition of trenchant satire in Puerto Rican theater. And the play itself, in a way, reflects its own bicultural tension. Rivera wrote it in English, then in translation it became Off-Broadway’s longest-running Spanish-language production, and now the original English text is being performed on tour by Chicago’s multicultural UrbanTheater Company.

The Holyoke performances are presented by MIFA, the Massachusetts International Festival of the Arts, in association with the community-based Palante Theater Company, a recent addition to Holyoke’s surging arts scene. The troupe is looking to open a downtown black-box theater, but in the meantime is hosting La Gringa as a “pop-up” at Nueva Esperanza’s event venue, El Mercado, at 413 Main Street. The performances happily coincide with the second annual food-and-culture Taste of South Holyoke Festival.

Photos by Sarah Crosby and courtesy of UrbanTheater Company