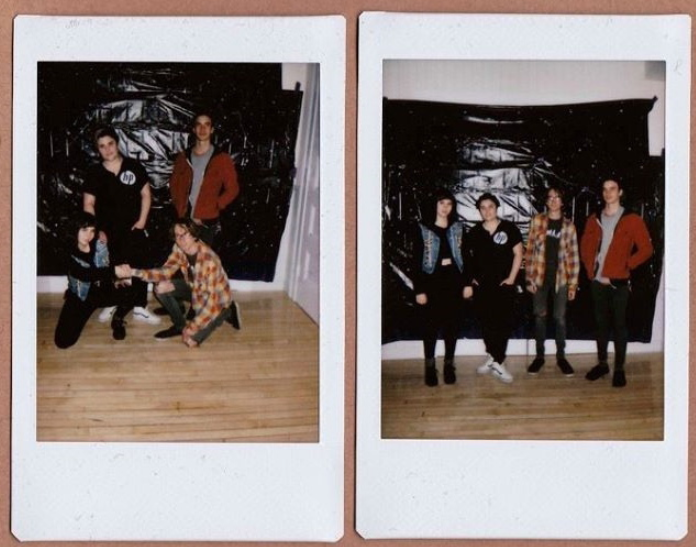 Stretched between Brattleboro and Northampton, a new band, Smartyr, has come on the scene.

I kept running into Chad, the main singer, at shows starting last summer. He had left behind his New Haven, CT-based band, The Chore Boys, and moved to Northampton. Every time I ran into him — at shows or the grocery store where he works — he’d insist that this was the month he was going to get a new project off the ground and start playing shows again.

He paired up with Valley musicians — Sara (Sapphic Prince and Funfare) on vocals and bass, Dylan (Wrestle Crow) on drums and guitar, and Sophia (St. Nothing) on guitar and drums — and launched Smartyr back in the spring, and now they are in full swing, playing out and making noise. But make no mistake, Smartyr is a collaborative effort, where at live shows there is a healthy amount of musical chairs going on, sharing instruments and the spotlight.

Like The Chore Boys, Smartyr picks these kind of political and often kind of funny phrases as a base for their lyrics. On the most recent Chore Boys record, for example, the song “Miley Cyrus,” where Chad repeats the phrase “Party in the USA” over and over, is followed by a song called “Party in the Bathroom.” One of their songs is called “Nancy Reagan Went to Smith.”

When I asked Chad about it, he reminded me that “her husband is basically the reason everyone who went to college is in debt.” The short punk outburst of a song clocks in at about a minute and ten seconds and the same eleven words — “Nancy Reagan Went to Smith. Just Say No. No Means No” — are repeated a few times. You can even buy a screen printed t-shirt of Nancy Reagan’s silhouette with the words “No means no” at their shows.

But while many of the songs and their hooks have an in-your-face screaming vibe — at home in The Chore Boys or Dylan’s former band Wrestle Crow — there is certainly some vibey indie head bobbing as well. The track “Nerve Gas,” between a pulsey double hit chorus, has a Pixies vibe that is the exception to the rest of the set. The song is also the longest, clocking more than three minutes long — or, three times as long as many of the other tracks.

The name of the band, Smartyr, doubles as a clever pun, too. It “stemmed from people thinking they were doing a throw away vote during the election,” Chad and Sara told me on a porch outside of a house show. “And look how that turned out,” he mused.

For one of their next ventures, they are hoping to corral local heavyweight, Dinosaur Jr.’s J. Mascis, to be filmed in a future music video for a song called “Shopping at J. CVS with J. Mascis,” based on Chad’s personal experience.

Catch them the 27th at, well, Smith College for a Halloween event. Maybe Nancy’s Reagan’s ghost will be in the mosh pit.