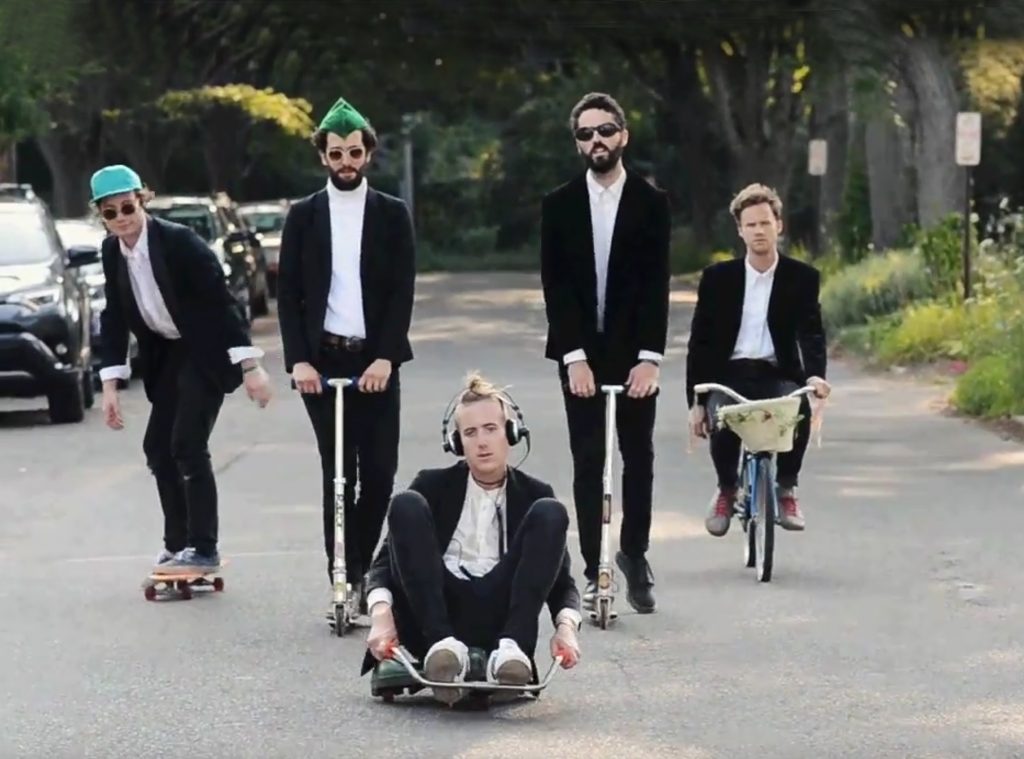 The band has its roots with the songwriting partnership of Marlon Jennings, and Lewis, which has evolved a lot since Sun Parade’s 2012 debut record, Yossis, a catchy indie folk rock tinged album in the vein of Elliott Smith. The band’s 2014 extended play, Heart’s Out, introduced garage rock to the band’s repetoire, but Sun Parade’s newest release perfects that formula while bringing in new elements such as R&B, funk, and jazz.

Lead vocal duties are split between Marlon Jennings and Lewis, with Lewis singing on the opening song, “Sleep Alone” an anthemic psych pop love song that kicks off with an avant-garde collage of sounds; pleasant white noise mixed with something that sounds like Tibetan throat singing, and drums moving closer in your headset, before the collage evaporates in an instant to reveal an upbeat pop song with a foot-tapping melody.

“Sleeping all alone is alright/ Cause I’ll be with you tomorrow night/ Every time we ever spend the night/ Wake up in the morning feeling bright /,” Lewis sings on the verse with a breathy quality that evokes a feeling of yearning while layers of backing vocals create a wall of sound effect.

Marlon Jennings takes lead vocals on “Cheer Up,” an explosively exuberant song with raw power and a chorus that’ll make you feel like you’re in the middle of a dance scene from the Blues Brothers. Marlon Jennings strains his vocals in a beautifully gritty way that’s comparable to Roger Daltrey of The Who.

“Steal My Heart” starts with a riff that would be right at home on a early 1970s Led Zeppelin record. There’s breakdowns, heavy fuzz laden bass, and a psychedelic chorus of “AHH!” that’ll make you want to head bang and howl at the moon.

“Werewolves” has a melancholy melody that could slay your heart strings. It’s a song about loneliness with a bouncy groove that spirals into a depth of poignancy contrasted by a growing paranoia that manifests in layered soundscapes at the end of the piece.

One of the highlights on the record is “Braindrain,” which begins with a neo-soul/ psych funk whistling intro before cascading into measured R&B panache that’s comparable to Stevie Wonder’s Songs in the Key of Life.

“All I’ve got to do is just learn to chill out/ All I need from you is just what you’re about/ Things that I can’t explain are now haunting my mind/ Giving into the brain drain till the end of our time.”

The backing vocals on this tune take 1970s funk tropes and turn them on their head by adding eerie theremin sounding whistling that replicates the effects used for flying saucers in science fiction B-movies.

“Echoes of My Heart” is a Radiohead-esque approach to a sentimental jazz ballad that’s a rare find among the psychedelic tinged blend of genres presented on this record. It’s a dreamlike and ethereal song that you might want to listen to while watching snow gently fall along a lonely stretch of highway.

The title track of the record, “Shuggy Mtn,” is a psychedelic hard rock descent into darkness. It’s the Apocalypse Now of this album with manic energy and a penchant for smirking anger. It’s as close as Sun Parade would likely ever get to sounding like Rage Against the Machine. Marlon Jennings presents lyrics with acidic fangs ready to take a bite out of the mainstream music industry.

“This ain’t the mainstream/ This ain’t the team scream/ You motherfuckers only want to do the same thing,” Marlon Jennings sings with gleeful condemnation on the chorus.

There’s not much criticism to be said of the Sun Parade’s newest release. The only complaint is that as exploratory as the songs are, they aren’t too concerned with charting new ground when it comes to lyrical storytelling. You probably won’t remember the lyrics as much as you’ll remember a catchy melody or instrumental line.

Shuggy Mtn Breakdown has the potential to become legendary as a classic album with local roots. It’s not perfect, but art never truly is. Sun Parade delivers a rare psychedelic rock record that doesn’t try to be strange for the sake of strangeness, but is above all about serving the music first.

Sun Parade will perform at the Parlor Room in Northampton on Oct. 14 at 8 p.m. with New York-based soul/funk/disco fusion band, Strange Loops.