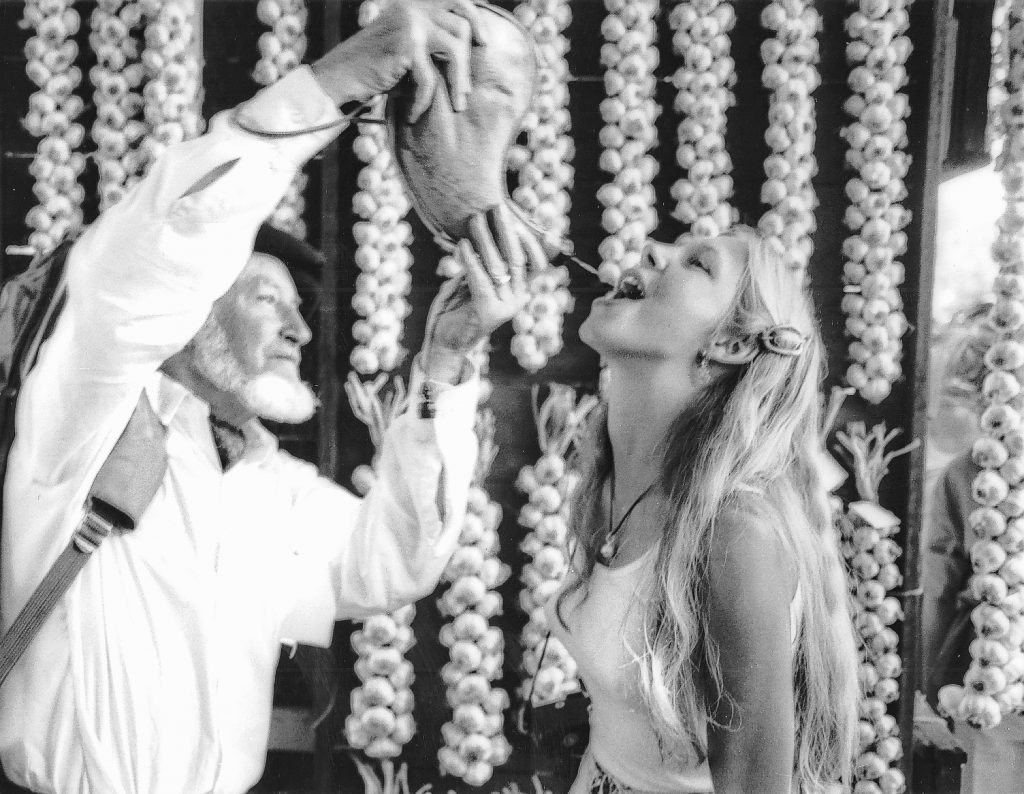 Garlic Is as Good as Ten Mothers, Blank’s 1980 documentary paean to the “stinking rose.”

In his four-plus decades of filmmaking, director Les Blank (1935-2013) embodied the best of American documentary filmmaking. While his best-known work remains Burden of Dreams (a wild look at the insanity that was the production of his fellow director and friend Werner Herzog’s film Fitzcarraldo), his true impact comes from not one film, but from his wide-ranging view of American culture. Training his camera on smaller pockets of local life that might be easily overlooked—he was especially good at recording the hyper-local musical traditions that dot the national landscape—he ended up leaving a legacy that would help us understand ourselves long after the film stopped rolling.

If you’re not familiar with Blank’s work, this week offers up a good chance to get acquainted. On Wednesday night at 7, Amherst Cinema will host a double feature of the director’s food films as part of the theater’s ongoing Food and Farms film series, which looks at the connection between agrarian culture and the American way of life.

First up is Garlic Is as Good as Ten Mothers, Blank’s 1980 documentary paean to the “stinking rose.” Filmed at and around the famed Gilroy Garlic Festival in California, the film feels like a particularly personal project for Blank, filled with tantalizing shots of culinary prep and a bustling soundtrack that makes you want to jump in and start skinning some cloves alongside the garlic aficionados he talks to over the course of the film. (One of those garlic lovers is Alice Waters of seminal restaurant Chez Panisse, which would play such a big role in the country’s shifting sense of fresh cuisine.) Chronicling a flavor that ties together so many of the world’s different tastes, Blank—who recommended that theaters surreptitiously roast garlic in the back of the theater to enhance the experience for moviegoers—certainly gives the cloves their due.

Following his ode to allium is Blank’s 1990 doc Yum! Yum! Yum!, in which the director ventures south to Louisiana to explore the many spices of Cajun and Creole cooking. There, the gumbo and étouffée get bubbling alongside the percolating accordion music of Marc Savoy. (Savoy and his wife Ann would prove such engaging subjects that Blank would go on to make a short documentary on the pair the following year.) As October finally starts to bring a bit of a chill to our evenings, Blank’s cozy take on life in Louisiana will make you feel warm again.

But maybe you’re one of those odd people who don’t like garlic. If that’s you, I can’t pretend I understand, but I can at least direct you north to Shelburne Falls, where Pothole Pictures will present Stephen Frears’ (Victoria & Abdul) indie classic My Beautiful Laundrette in Friday and Saturday night showings. The 1985 film was an art house hit in an era that didn’t often focus on small-scale stories like the one it tells. But if the tale of two guys trying to make a go of a laundromat doesn’t exactly seem like a wild ride, the magic of director, writer, and actors (including a young Daniel Day-Lewis) coming together to tell a good story can make all the difference.

Also this week: Cinemark Theaters are getting in the Halloween spirit, offering up a little something for all ages as the holiday creeps closer. This week, they bring in slasher classic A Nightmare on Elm Street for Sunday and Wednesday shows, as well as a special screening of Night of the Living Dead on the 25th. This particular show is definitely not for zombie purists, though: a RiffTrax production, it features a trio of comedians wisecracking their way through the film.

For the smaller ghouls among us, they’ll screen Disney’s HalloVeen Party on Saturday morning at 10am. The hour long show (costumes welcome) features interactive games as well as a new episode of Vampirina, in which a vampire tween deals with the trials of moving from Transylvania to Pennsylvania. Also showing at Cinemark this week, and possibly just as scary, is Kirk Cameron’s Revive Us 2, in which the Evangelical Christian actor suggests that everything will be okay in America if we would all just carry the flag and pray to his God. Ben Carson (yes, the Housing and Urban Development Ben Carson) is a featured guest for Cameron’s “National Family Meeting.”

Finally this week, a quick note to let the most dedicated moviegoers know about Amherst Cinema’s Preview Club. An interesting cross between social club and backstage pass, the Club gives film lovers a chance to catch sneak previews of major new films before the rest of us yokels, and give feedback about them through a comment-card system. Titles aren’t announced until the week of the screening, and shows are followed by conversations hosted by the cinema’s Carol Johnson and George Myers. Subscription passes for the fall season have sold out at press time, but individual tickets are still available for each film. The next show—this month will feature Dee Rees’ (Pariah) new film Mudbound, which is unlikely to have a full theatrical run now that it has been scooped up by Netflix for distribution—comes to town on Tuesday the 24th.