Stagestruck: A Light, a Lake and a Lady 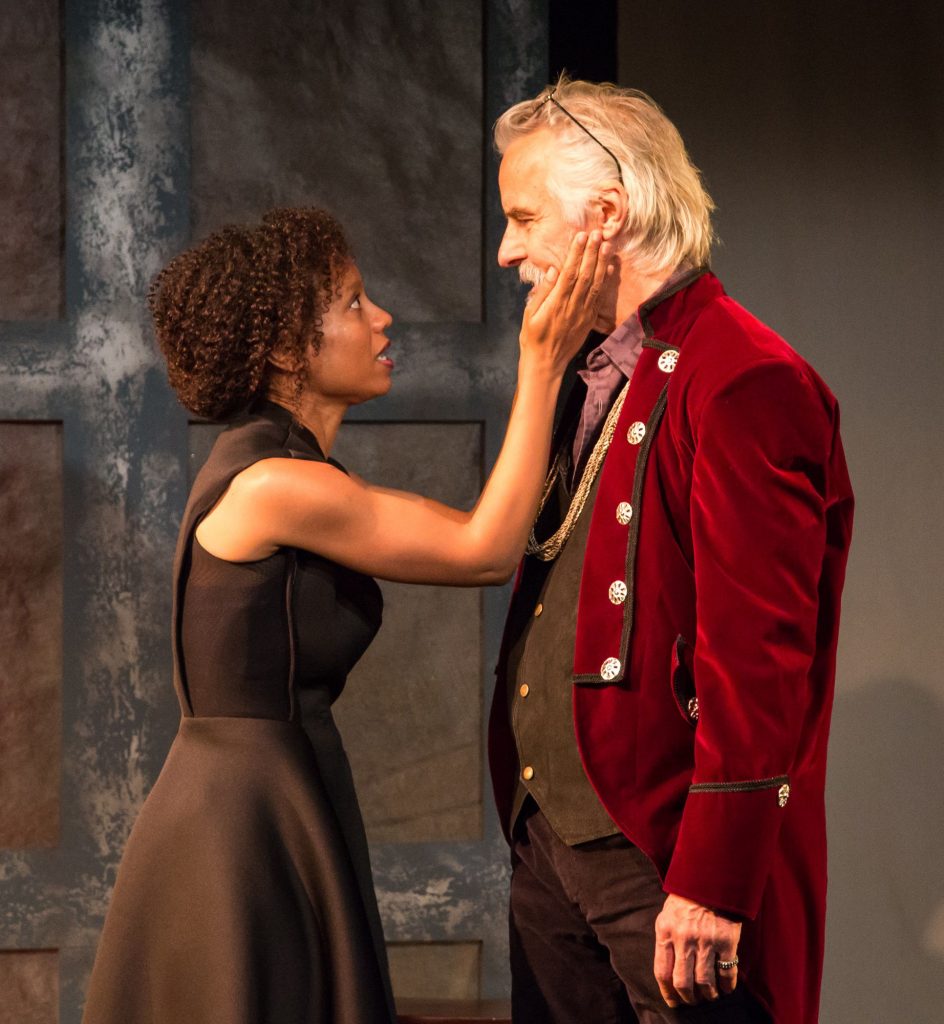 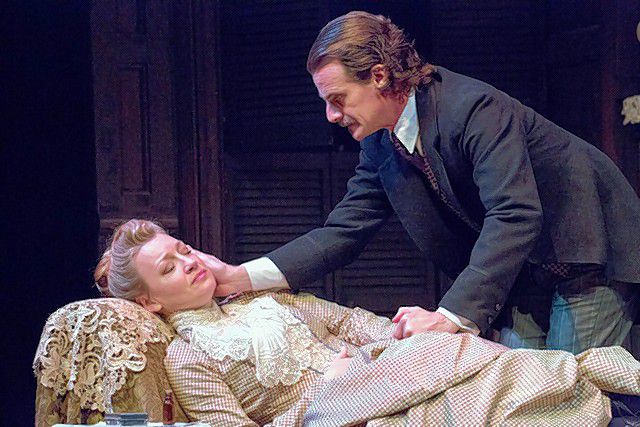 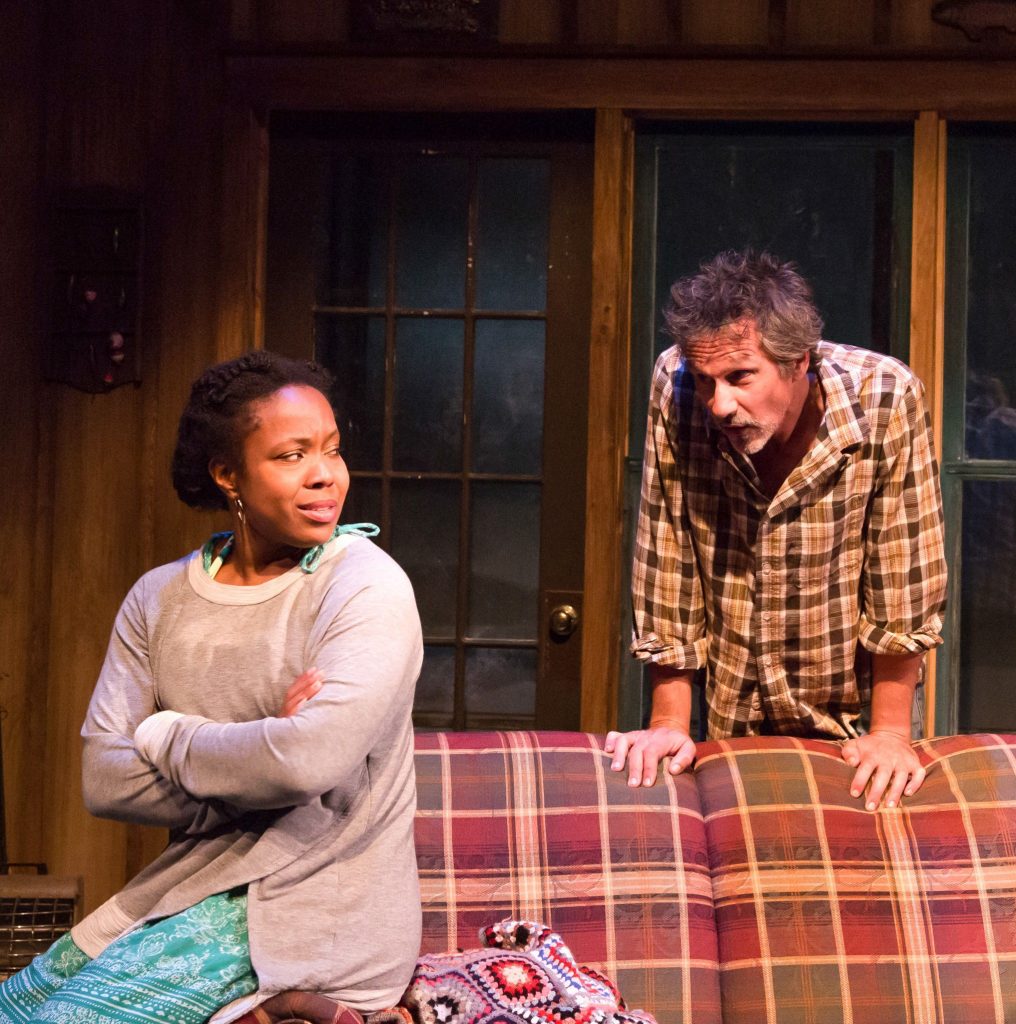 In last week’s column I covered a fistful of shows playing in the Valley, and now it’s the Berkshires’ turn. Shakespeare & Company’s God of Carnage recently completed a late-season run, and three quite varied fall productions are now running on other western stages.

In Pittsfield, Patrick Hamilton’s 1938 psychothriller Gaslight is playing at Barrington Stage Company through this weekend. The inspiration for reviving this engaging chestnut seems to be its troubling contemporary associations. Thanks to this play, “gaslighting” has come to refer to manipulating someone, with misdirection and contradiction, into doubting their own sanity – in other words, the kind of psychological bullying that has lately found a niche in social media.

When I sat down for this performance, I remembered nothing of the stage version, or the 1944 film starring Ingrid Bergman, except the premise: a scheming husband methodically driving his pliant wife mad by making her question her memory and senses. 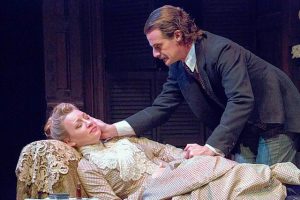 As it unfolds, the play would seem to be one of those “what’s really going on?” mystery thrillers that we associate with Hitchcock and more recently with plays like Deathtrap and Sleuth. But there are no corkscrew plot twists here. Instead, the chills come from watching the husband’s cruel manipulation of his credulous wife − part of a criminal effort involving some priceless rubies − and then later a couple of close calls where the net spread to trap him almost tears.

The too-predicable material is handled elegantly by director Louisa Proske and a strong cast. As Bella, the passive focus of both persecution and rescue, the splendid Kim Stauffer’s default posture is hand-wringing, broken by moments of timorous delight and outright panic. Mark H. Dold, as her Machiavellian persecutor, and Kevin O’Rourke, as the retired detective who’s on to him, make a nicely contrasting pair. Dold is trim and dapper, with an urbane demeanor and an acid tongue, O’Rourke fleshy and casual, sipping whiskey as he nonchalantly picks a lock, though he’s also too reliant on sheer volume for emphasis.

It’s built on a familiar premise: a brief intersection in the lives of two strangers who are polar opposites, taking them through tension and conflict to mutual appreciation and self-knowledge. This one, thankfully, doesn’t go quite that far along the usual track. 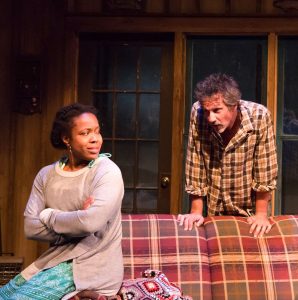 Here the odd couple are Veronica, an African-American New York professional, and Hogan, a feckless white upstater. They meet when she arranges for a summer rental of the dilapidated lakeside cottage of which Hogan is the rather lackadaisical landlord.  She’s a widow and mother of two young children, he divorced and estranged from his daughter.

Race, it turns out, is not one of the things that separates these two – in fact, it’s what brings them together, after she’s found that other vacation places had “just been rented” as soon as the owners saw her face. But their contradictory personalities and expectations provide plenty of conflict and occasional sparks. There are evasions and lies on both sides, and it emerges that each of them has committed a crime born of necessity.

Hogan is the more “interesting” and complicated character – more outgoing, more talkative and more damaged. Quentin Maré’s expansive performance explores all the corners of this big-hearted man within a fragile shell. Lynnette R. Freeman, whom Valley audiences will vividly remember from Intimate Apparel and Clybourne Park at New Century Theatre, responds to his shambling ebullience with a finely tuned lesson in dramatic subtlety, conveying a gamut of emotions with the cock of an eyebrow or an ironic half smile.

Auburn’s script is trenchant and witty (he’s the Pulitzer- and Tony-winning author of Proof). You could see Lost Lake as either a drama with lots of laughs or a comedy with lots of pain, and director Daisy Walker fluently captures both.

Finally, this weekend I’ll be seeing The Last Wife, a guest production from WAM Theatre at Shakespeare & Company through Nov. 5th. The title character is Catherine Parr, the sixth wife of Henry VIII and the one who survived. Playwright Kate Hennig calls it “an imagining of history. … Portions of it are deliciously accurate, while others are completely and utterly fabricated.”

Though it’s set in the 1500s, the playwright insists “This is a contemporary play.” So Catherine is simply Kate, the language is playfully vernacular (when they first meet, King Henry observes that Kate’s elderly husband “is going to bite the dust pretty soon”) and the viewpoint resolutely feminist.

The play revolves around royal politics, family politics and above all, sexual and gender politics. In the lead-up to her marriage, Kate insists on a prenup that protects her personal property and extracts a promise from the king that their marital sex will be on her terms. She fights to have her stepdaughters, Elizabeth and Mary, properly educated and given their royal prerogatives, even though the king disparages them as “bastards” from those previous marriages that ended, um, badly.

WAM continues its dual mission of giving a portion of ticket sales to an organization supporting girls and women, this time to the Soldier On Women’s Program, which provides services to women veterans.