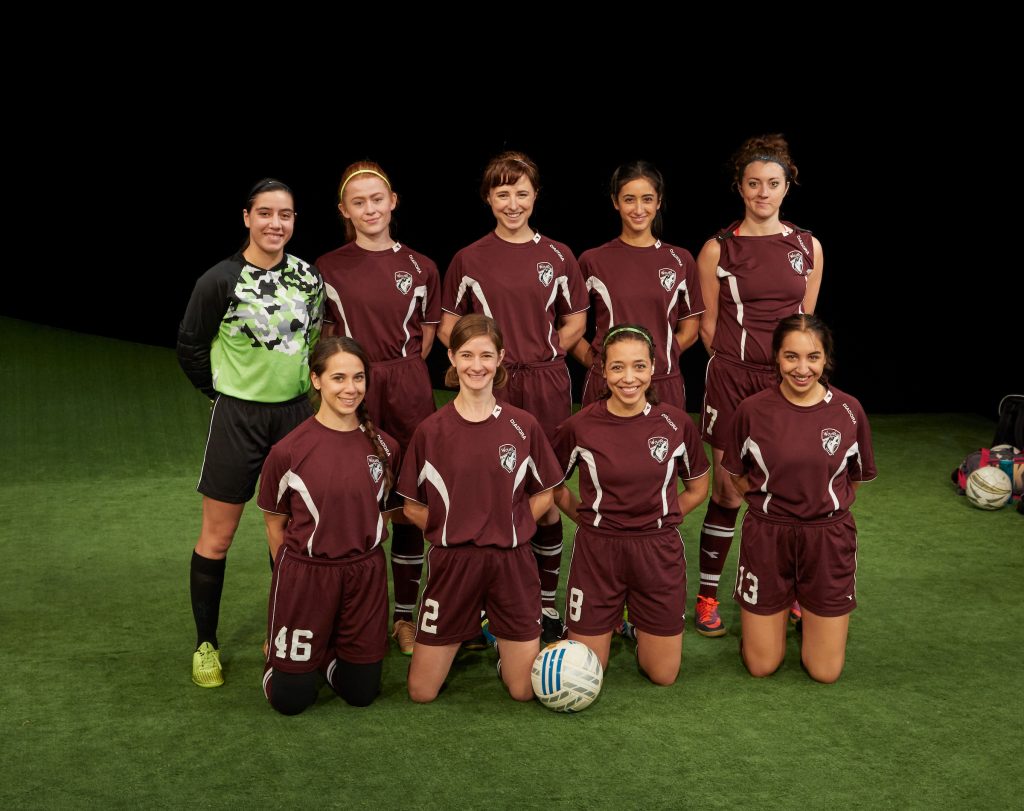 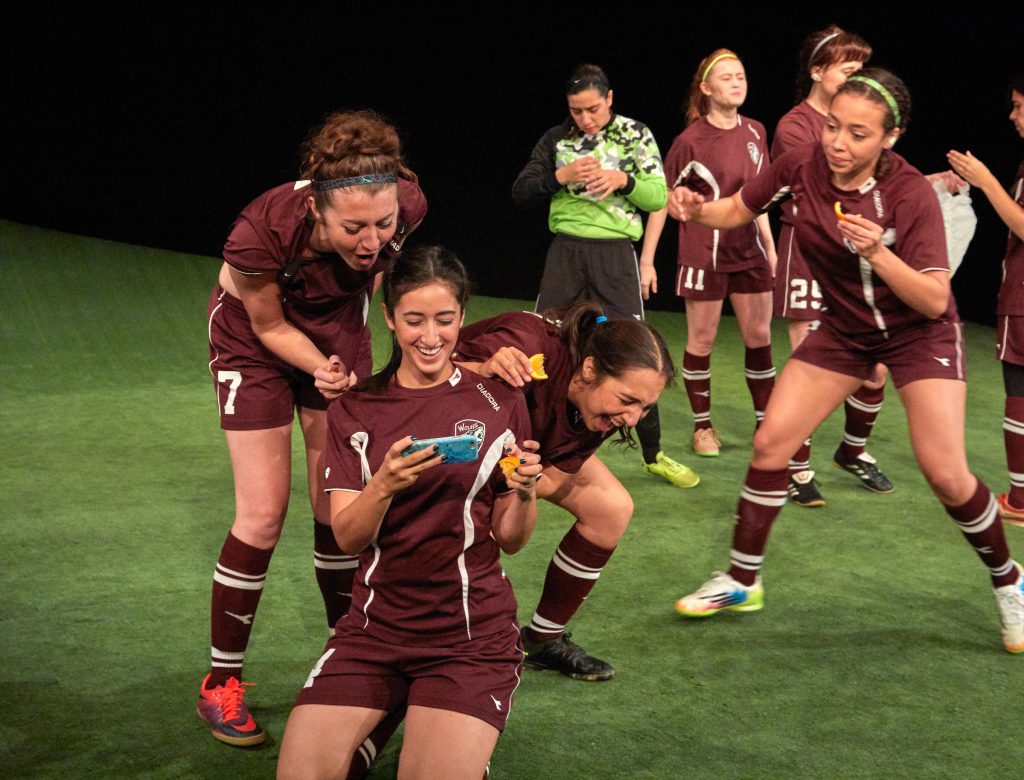 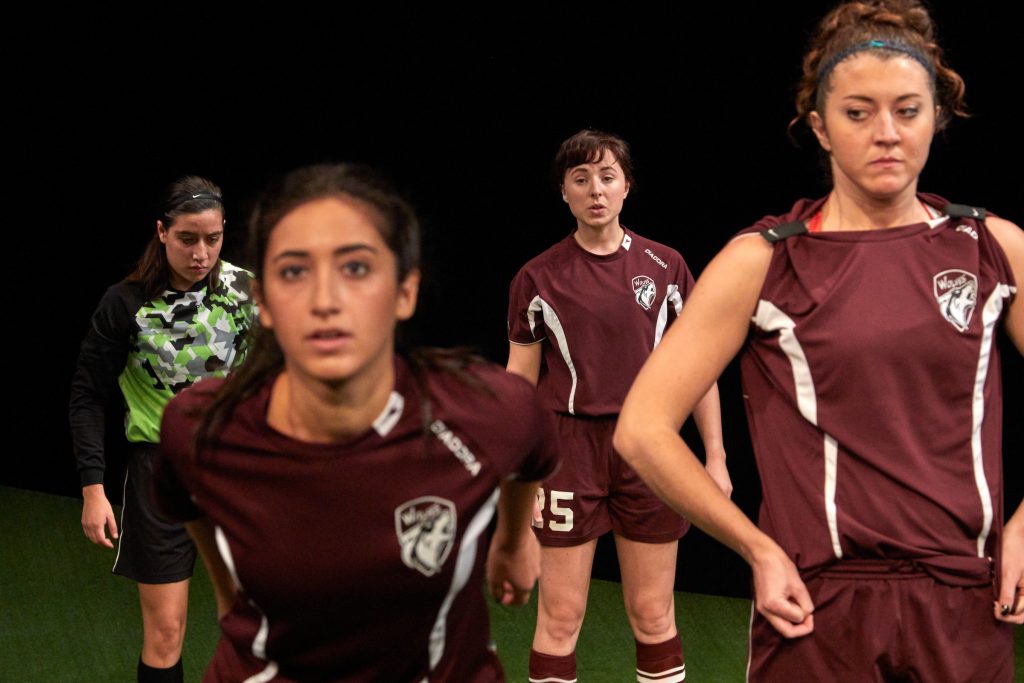 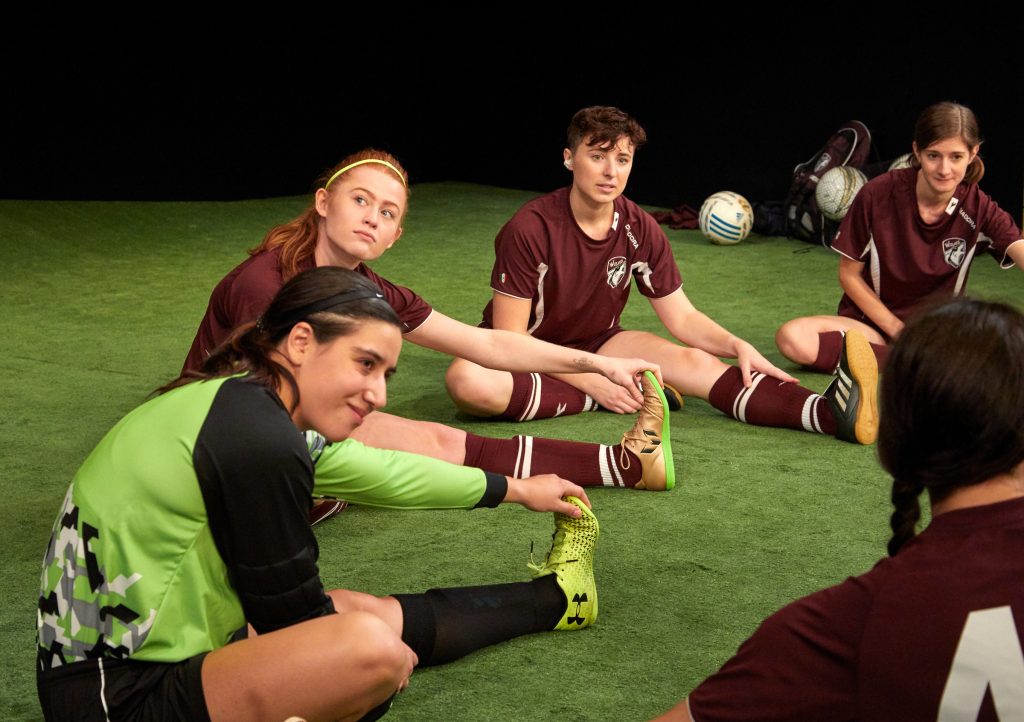 The timing was kind of perfect. Last week, just as the U.S. men’s soccer team was being eliminated from qualifying for next year’s World Cup, Hartford’s TheaterWorks was opening The Wolves, an energetic if puzzling play about women’s soccer. Make that girls’ soccer. Sarah DeLappe’s high-spirited drama is about a team of suburban teenagers competing in six-a-side indoor soccer.

In the context of this show, the World Cup news invites comparisons between women’s and men’s professional soccer in this country, where the women’s national team has historically been far more successful, despite being far less well supported. At the grassroots, more girls play organized soccer here than in the rest of the world combined.

That’s not hard to believe when you see the energy and passion these Wolves bring to the sport. They’ve grown up playing soccer and now (despite a useless offstage dad-coach) they live for the Saturdays that the play charts over one winter season. Mariana Sanchez’ set, sprawling across TheaterWorks pocket-size stage, represents a corner of the indoor field’s expanse of green Astroturf on which the nine young women play their hearts out.

When we first meet them, chatting and gossiping while warming up for the day’s match, they seem undifferentiated, wearing identical shorts and jerseys. But DeLappe (who neatly captures the flow of teenspeak) and director Eric Ort are very good at gradually disclosing their individuality. 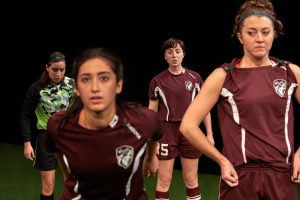 The best thing about the production, playing at TheaterWorks through Nov. 10, is the performers. Like a well-oiled team, each of them shines within an ensemble that is the winning sum of its parts. The characters are identified only by the numbers on their jerseys, but the actors deserved to be named:

All of them are almost constantly in motion throughout the 90-minute performance, the dialogue punctuating their training sprints and warm-up exercises. (All are awesomely fit.) The play opens in the middle of two overlapping conversations, one about a Khmer Rouge war criminal and one about playing while menstruating. Things continue in this fragmented vein as distractions pop up or are suddenly injected when topics or teasing get too close to the bone.

Bubbling under the repartee are intimations of bulimia, lesbian secrets, pregnancy and rape. But while the first-time playwright places these and other issues in the midst of the girls’ sometimes fraught camaraderie, few if any of the plot lines or adolescent flare-ups lead anywhere dramatically. Indeed, a crushing tragedy that occurs late in the play comes out of nowhere, unconnected to anything that’s happened so far.

There’s also no buildup in the string of games themselves – nothing’s really at stake. Much is said about an end-of-season tournament but there’s little impact when it arrives. It feels like a documentary following a typical group of high school athletes through an ordinary season, getting to know and (mostly) like them, but with no dramatic arc and an artificial plot device inserted for a final goal shot.

In a program note, DeLappe traces parallels between her play and war movies, with young female athletes in the place of young male soldiers. In this arena the young women become independent and self-directed, out of the orbit of parents, teachers and other authority figures, “not objects to be consumed or controlled, sexualized or infantilized,” but existing nonetheless “within a bubble of suburban privilege.”

Which I suppose is why the playwright chose not to follow the typical arc of sports (or war) movies, where the payoff is final victory. But the lack of any resolution, beyond shared grief over an unearned plot twist, left me feeling frustrated, like an absorbing, well-played soccer match that ends in a draw and a penalty-kick shootout.