Basemental: New Tricks from the (not so) Young Tricksters 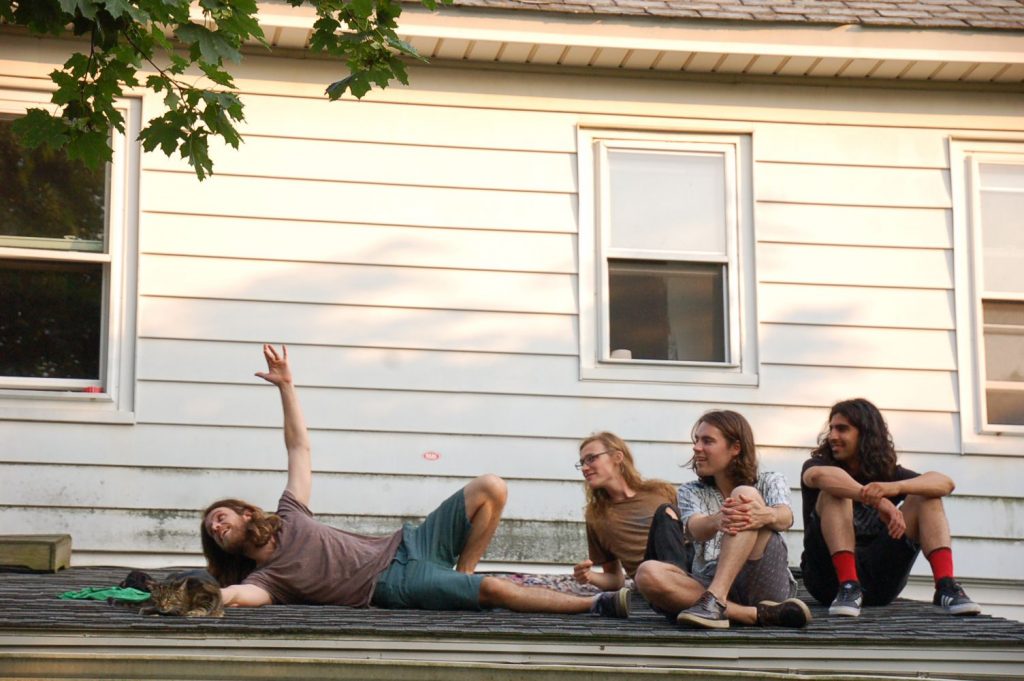 The Young Tricksters have returned. After what felt like forever, the Amherst quartet have broken their quiet to give the people what they want: a full-length album. After releasing a couple self-recorded demos back when the dinosaurs roamed the earth (March 2013 to be exact), the group will be finally posting their magnum opus on Bandcamp this week, before joining And The Kids at the Parlor Room in Northampton on Oct. 27.

The Tricksters—Ryan Severin (guitar and vocals), Aaron Noble (drums), Lucas Solórzano (guitar and vocals), and Jesse French (bass and vocals) — have carved out a niche crafting these large sweeping hunks of song. They excel at juxtaposing heavy pop-rock, best exemplified by Queens of the Stone Age, with delicate, soaring harmonies a la Fleet Foxes, thus creating a sound all their own.

Recorded over the course of the last couple years with Western Mass super producer Justin Pizzoferrato at Sonelab in Easthampton, the new self-titled record doesn’t hold anything back. Complete with decadent accoutrements in the form of guest appearances from many of the Valley’s finest musicians. And The Kids’ Hannah Mohan sings on “Wishing Well” and Kristen Mounsey also belts it out on a couple of tracks. Listen closely and you’ll hear a crisp string section and woodwinds from Noble’s father, Hilary Noble.

Collectively, the album clocks in at one hour and twenty minutes, as all but two of songs are more than five minutes. But listening to the record, the songs don’t drag, instead taking you through all kinds of changes, nooks and crannies. The Tricksters’ strongest talent— beyond their superhuman chops — is the craft of their songs. Their ability to carve, shape, and execute complicated arrangements is remarkable, pushing listeners through peaks and valleys no one would predict or expect. Just when you think you are getting a sense of a song, it tastefully morphs, recalibrating its position; it’s like The Tricksters are hurling you down a river full of both lush rapids and sharp obstacles.

The project is a capstone of sorts for a band that has been around for so long but hasn’t released an album until now. The tracks touch on different eras and motifs within the Tricksters catalog. While old fan favorites like “Stay Down,” “Foreign Fables,” and “The Boy who Cried Wolf,” have once again surfaced in clear hi-fi along with newer songs like the fantastic “March of the Cicerone” and the nine-minute “Day and Night” (which sounds like it was lifted from Radiohead’s 2006 Hail to the Thief).

Notorious for being staunch perfectionists, the Tricksters haven’t left a single detail to chance. As pristine as the record is, with every last note methodically pored over, there isn’t space for one bad note, and that attitude could prevent them from taking risks in their music. With a band as powerful as this one, it would be a shame if they didn’t continue pushing and experimenting.

The self-titled record, despite its length, will leave you wanting more. It is truly an impressive achievement.