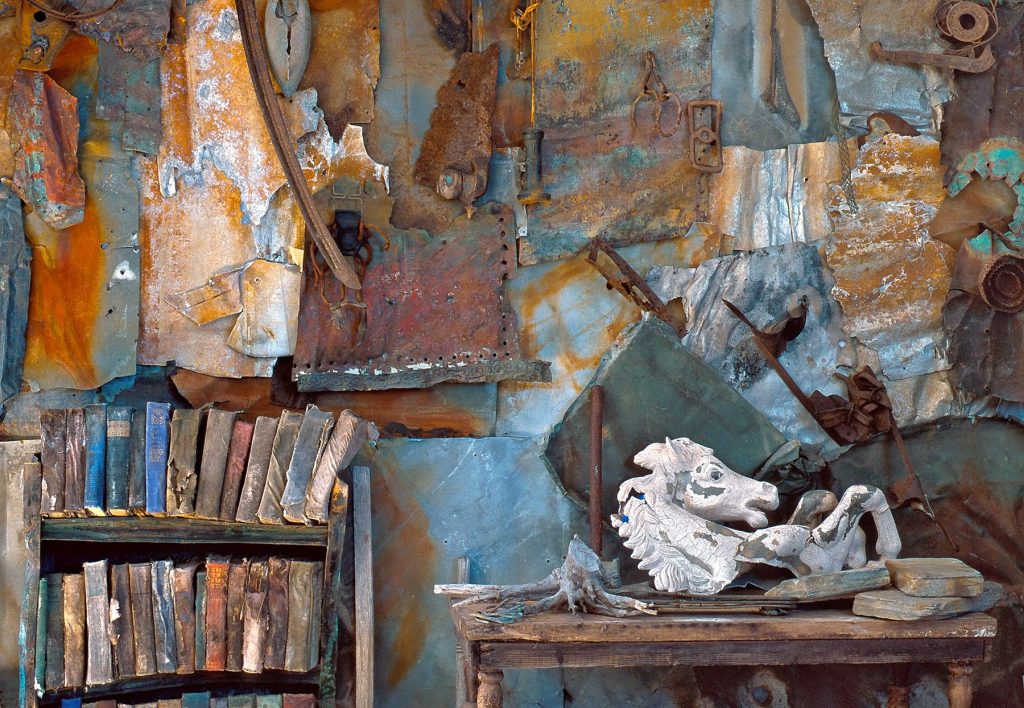 When my grandfather died, some years ago now, my mother and I spent the days that followed going through his apartment to sort through the belongings he’d left behind, trying to figure out what we should keep and what we could safely shunt along to the garbage heap. It was a daunting but fascinating task; my grandfather wasn’t exactly a hoarder, but he was a man of many and widely varied interests, and his little second-floor nest was brimming with half-completed projects and the mysterious notes and diagrams of a self-taught man.

Saving it all was never an option. But as we sifted through it all, I found myself stopping again and again to take photos of these things—most people, certainly, would have called it junk—that had once lived another life in his hands. When I want to think back on my grandfather now, it is those photos that I look for first, much more than snapshots of him. A picture of a person captures a moment; the things they lived with can tell a much longer story.

I thought of those photos the moment I laid eyes on the work of Rosamond Purcell, the 75-year-old artist whose still-life photography probes the hidden life of inanimate objects. Finding fascination in the unsung, Purcell’s work revels in decay and disuse, and uncovers a breathtaking beauty in breakdown. A book eaten away by termites; stuffed animal skins; wooden duck heads; in front of Purcell’s camera, they all get a second chance to tell their tales. “The contemplation of things that other people would normally just ignore,” as filmmaker Errol Morris describes it, is Purcell’s great gift. Her work has appeared in National Geographic and she has been a frequent collaborator of biologist Stephen Jay Gould, with whom she published several books.

This Wednesday, Amherst Cinema welcomes Purcell and film producer Alan Edelstein for a screening of An Art That Nature Makes, director Molly Bernstein’s 2015 documentary about the photographer and her work. It follows Purcell on visits to the junkyard and peeks in on photo shoots, giving us an idea of how she thinks of what it is that she does. “Don’t you think,” the artist asks,” that if you’re looking at something through a lens, and visually, the field changes because of that, that that is a phenomenon that is worthy of mentioning?” The results hardly let one argue otherwise. For fans of Purcell, who so often prefers to let her work take center stage, this screening offers a rare chance to meet the woman behind the lens.

Also this week: Ryan Gosling has had a pretty good run the last few years. His turn in La La Land netted him a Golden Globe and his second Oscar nomination (the first was for the under-seen 2006 film Half Nelson, worth seeking out), and he got to be the new Harrison Ford in the much anticipated sequel to sci-fi favorite Blade Runner. But this week, Valley filmgoers have the chance to catch Gosling in one of his odder earlier roles when Pothole Pictures brings Lars and the Real Girl to its Shelburne Falls screening room.

Gosling stars as Lars Lindstrom, a good-hearted guy who falls for Bianca, the girl of his dreams. One catch: Bianca is a lifelike sex doll that Lars has ordered from an adult website; he explains to his brother and sister-in-law that Bianca is “a missionary” whom he met online. But because of the town’s affection for Lars and his family—his crippling social anxiety stems from his mother’s dying during childbirth, after which Lars became everyone’s adopted son—everyone plays along with his delusion in the hopes of solving his deeper issues. For a film with a sex doll for a co-star, Lars and the Real Girl is surprisingly sweet, and even, if you give it the chance, old-fashioned. Where so many writers would have here gone for the lowest hanging comedic fruit, Lars’ Nancy Oliver—who graduated from UMass Amherst with a degree in English—instead cuts through any possibility of the juvenile with an unimpeachable sincerity.