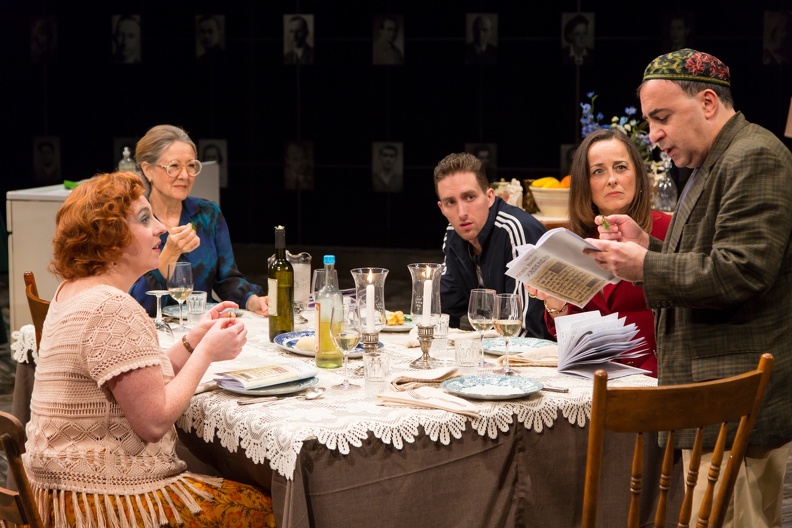 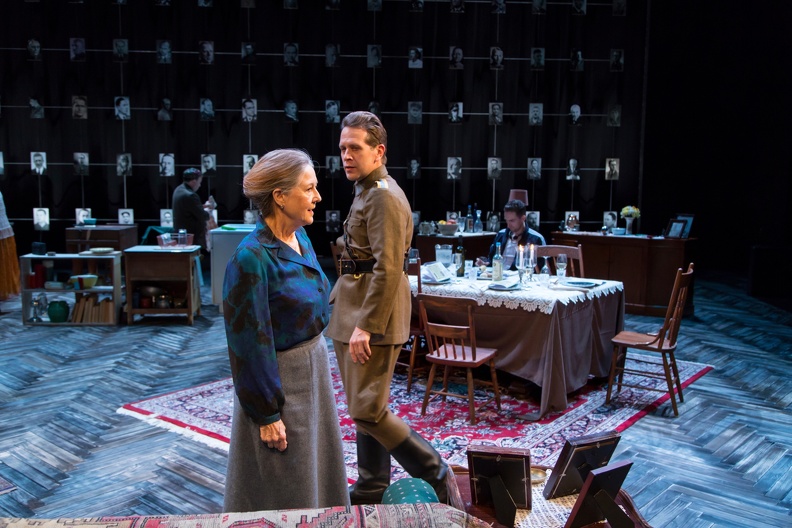 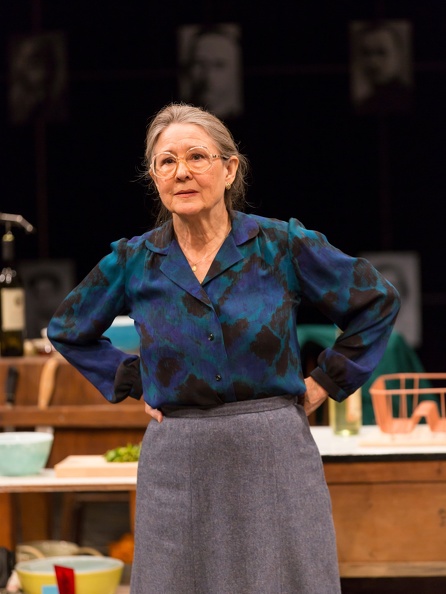 The current world-premiere production at Hartford Stage (through Nov. 12) is “based on a true story,” according to the publicity, which is otherwise unforthcoming about its real-life inspiration. No matter. The premise for Sarah Gancher’s Seder is dramatic enough to pass for fiction, but has an unmistakable ring of authenticity. Fact or fantasy, it’s one of the smartest, most engaging and provocative new plays I’ve seen.

It’s 2002, and the government of Hungary has just opened a museum in Budapest, one of those lest-we-forget memorials of the past and its victims. Terrorháza, the House of Terror, is in the building that formerly housed the headquarters and torture chambers of the AVO, the brutal Soviet-era secret police, as well as their predecessors during the Nazi occupation. One of the exhibits is a Wall of Murderers lined with photographs of the AVO officers and operatives who worked there. 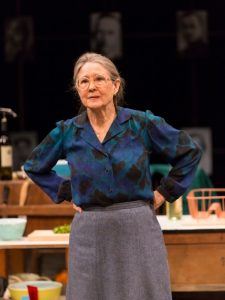 One of those headshots is of a woman who had been a lowly secretary in the building but is now seen as guilty by association. In those days, and especially after the failed uprising in 1956, Hungarians had three choices: participate in the repressive system, resist it and risk death in one of the blood-spattered cells, or keep your head down and your eyes closed, and survive. That woman, Erzsike, chose the latter, and now that compromised past has come back to haunt her.

As the title signals, the play unfolds during a Passover Seder – though the Wall of Murderers literally looms over the action on Nick Vaughan’s kitchen/dining room set. The Seder is a first in this determinedly secular household, and Erzsike is stoically going along with it to please her daughter Margit. The young woman is a member of the second postwar generation of Hungarian Jews, now tentatively rediscovering their culture, which was savaged by the Nazis and then suppressed by the Communists.

This night is also different from all other nights because Margit has invited a hoped-for boyfriend, David, an American Jew who knows the Seder’s dinner-table rituals. The other guests are Erzsike’s two other children, both of them reluctant partakers of the feast. Laci is an insolent young man who apparently works in the new Hungary’s criminal underbelly. Judit is the eldest and bitterest, long estranged from her mother, and her arrival ignites a nuclear chain reaction of revelations and recriminations.

The Seder, of course, is not just a framing device but a metaphor. The commemoration of the Israelites’ suffering in Egyptian bondage and celebration of their miraculous deliverance receives an ironic parallel in the collapse of the Communist regime and its increasingly disenchanting aftermath. So too, the convivial gathering of family and friends over the Pesach meal provides the fuse for an overdue explosion. 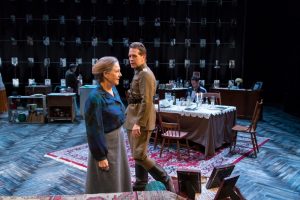 Elizabeth Williamson, the theater’s associate artistic director, stages the piece masterfully, deftly employing the broad stage to delineate character relations and conflicts. Her sure hand guides a strong, well-matched cast through the play’s roller-coaster emotions as the cascade of present-day revelations triggers a series of past-tense recollections. In these flashbacks, enacted in Marcus Dillard’s ghostly lighting, Erzsike recalls a humiliating long-term “arrangement” with an AVO officer and an “arranged” marriage for political expediency. The two men in these haunting cameos make a chilling contrast. Jeremy Webb is the charming seducer who becomes a calculating cad, and Liam Craig the shy admirer who becomes a pitiful lush.

The wonderful Mia Dillon is Erzsike, steely in her resistance to suggestions of complicity but heart-pierced by her first-born’s burning hatred. Judit is played by Birgit Huppuch, whose default mode is intensity. Here it’s white-hot, if a bit overwrought, as if her skin can hardly contain her pent-up rage as she indicts her mother for sins against the nation and the family.

As Laci, Dustin Ingram, draped in a tracksuit and iPod headphones, is the laid-back essence of disaffected snark. Julia Sirna-Frest gives Margit a kind of desperate optimism, and Steven Rattazzi’s dorky, compulsively chatty David provides most of the play’s comic relief, which frequently punctuates the tension without puncturing it. (In the script’s clever linguistic convention, David’s imperfect Hungarian is rendered with mispronunciations like “I kiss your hund” and “unexplured issues.”)

When the domestic storm finally ebbs, the fraught Seder concludes with the traditional toast of hope for renewal and redemption, “Next year, in Jerusalem!” Gancher’s drama ends on a similar provisional note, as tenuous and fragile as any vision of the Promised Land.