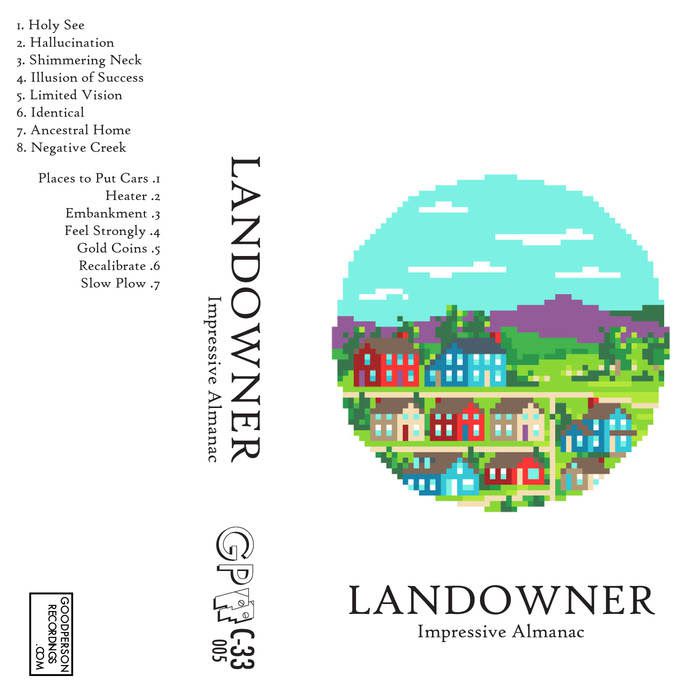 When I heard there was a local band called Landowner, I thought: “Surely, they’re joking. This is satirical, right?” But punk is weird these days — everyone is on Facebook hoping companies will sponsor them — so I wasn’t completely sure.

I started asking friends, “They’re not for real, right?” And no one knew. But what stunned me is that some not only took the name at face value, but thought it had merit, especially those who aspired to own land. It was unimaginable to a few people I spoke to that such a name could, or would, be condemning land ownership. It made me think of a 2009 study that showed conservatives didn’t get Stephen Colbert was joking when he played the part of a right-wing TV host.

I emailed Dan to ask why he picked the name Landowner. He he thought it was “funny” in a “dark” way. Shaw works as an urban planner and is constantly reminded of the unique sway landowners have over others. He wrote, “the idea of ‘owning’ land is darkly American, and has very unsustainable, colonialist, domineering overtones, wrapped up in conquest and exploitation; though we take it for granted and land ownership is a huge underpinning of our whole society.”

I was curious so I started listening to Landowner’s debut album, Impressive Almanac, that Dan Shaw worked on when he had just moved to area, living in Conway, without much of a social life. With songs called “Places to Put Cars” and “Illusion of Success,” I laughed at myself for even entertaining the idea that this band could be anything but satirical.

The fifteen track album centers on its lo-fi post-punk appeal. Layered guitars play simple single note lines mirroring the chord structure, and vocals surface above, with precise melodies. Some songs, like “Holy See” and “Limited Vision,” are short fast-paced outbursts, while others, like “Heater” and “Identical”, have a brooding ballad quality. Many are both.

The lyrics peddle a critique of our modern illnesses, not unlike those that have gone before. The first line on the record is “it feels as if everyone is more connected, but to what end?” But as much as these songs look out — and question militarism, unnecessary consumption, and misogyny — they also look in, as Shaw questions his own assumptions, feelings, and relationships. “Feel strongly” interrogates this. The premise is a multiple choice question where Shaw always feels the third option: “I don’t agree or disagree.” He then confides in his listeners that he wants to feel more strongly.

Impressive Almanac is confident and self-assured, capturing the dissonant, smooth, yet horrifying, aura of a world where owning land is the ultimate “Illusion of Success.”

Landowner has expanded to include a full lineup of Jeff Gilmartin, Josh Daniel, Josh Owsley and Elliot Hughes. Keep your eyes peeled for live shows and a new record next spring.