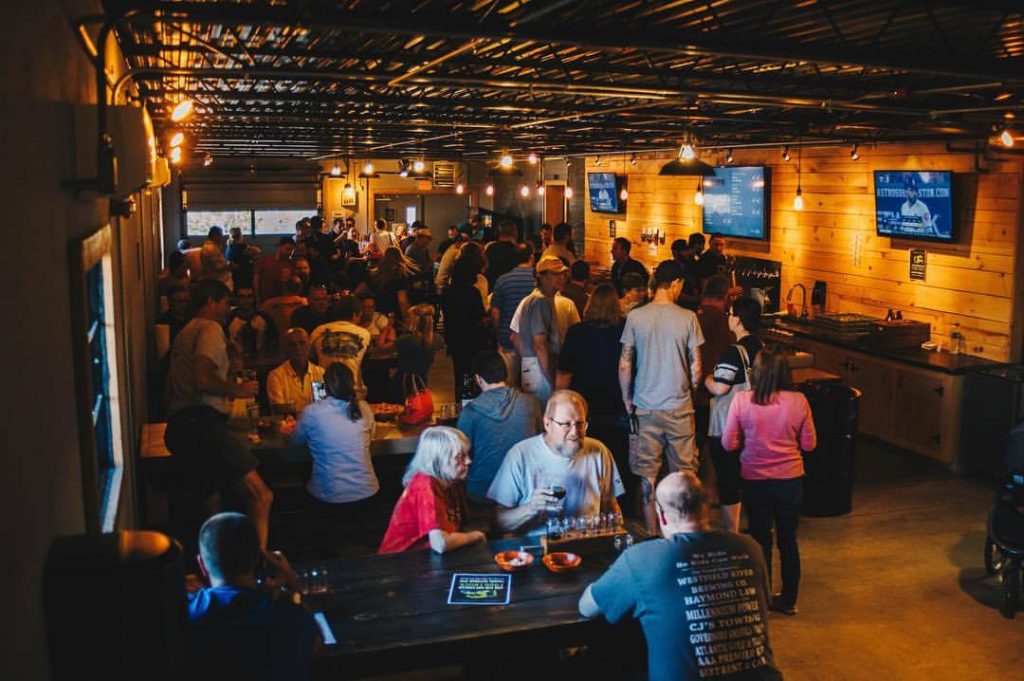 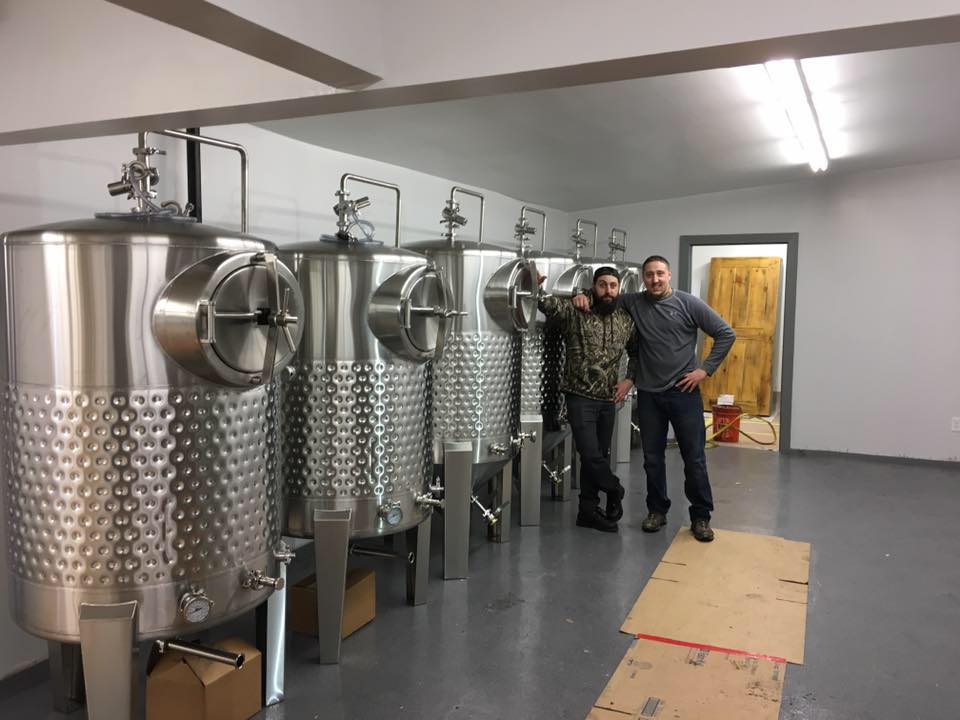 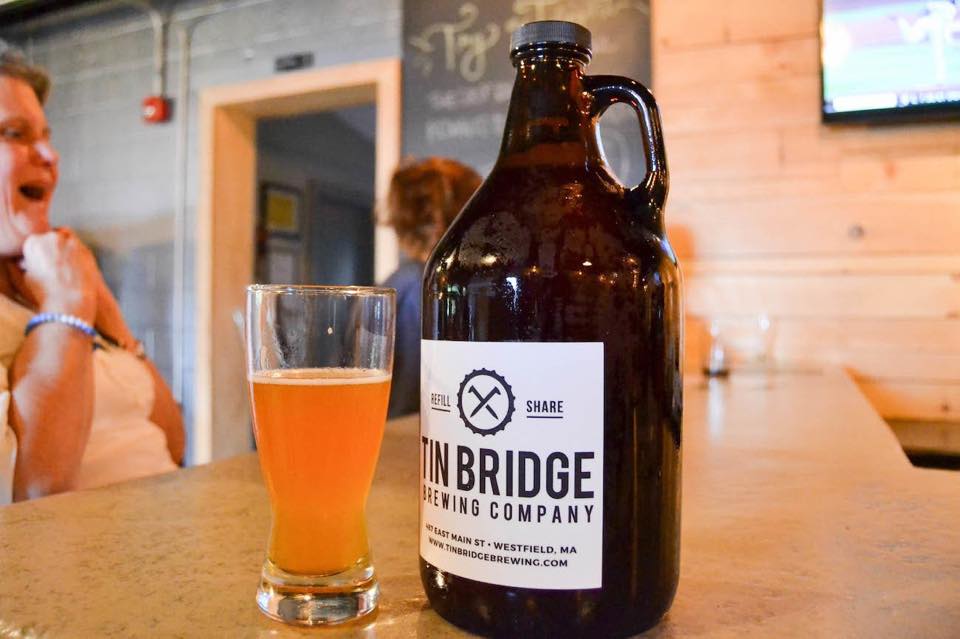 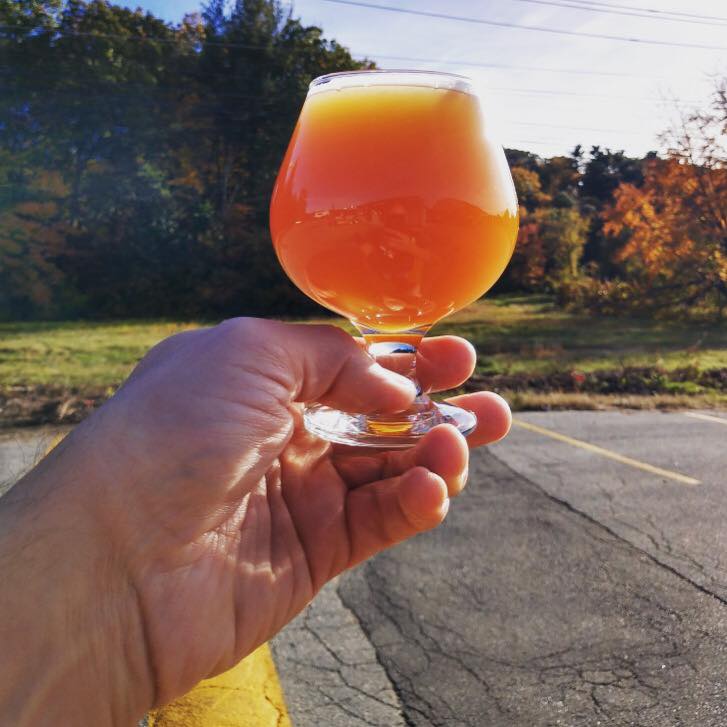 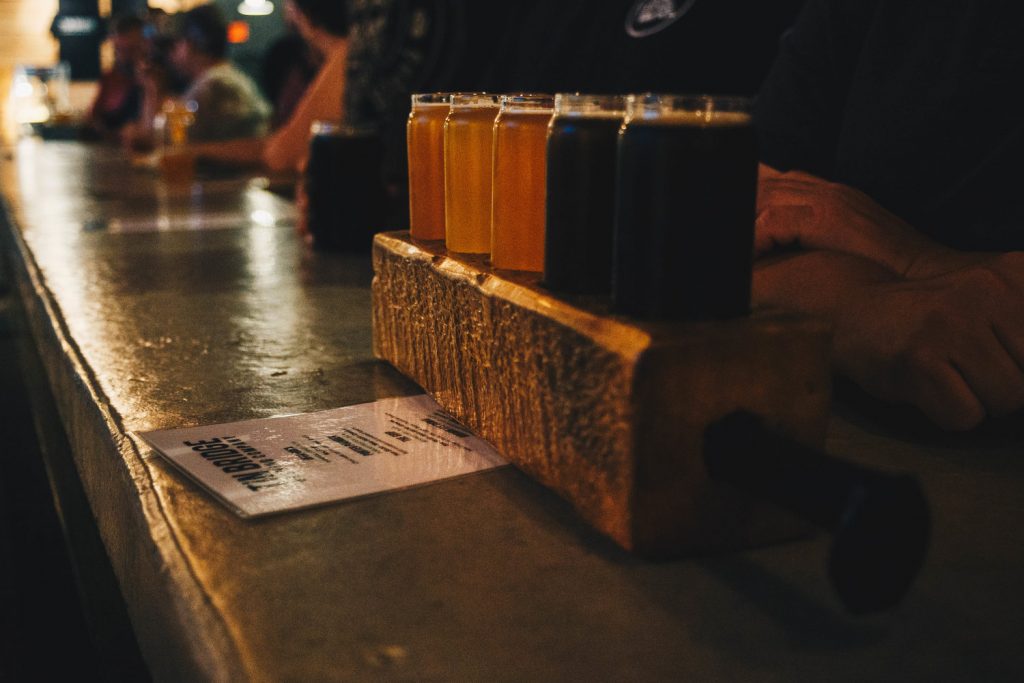 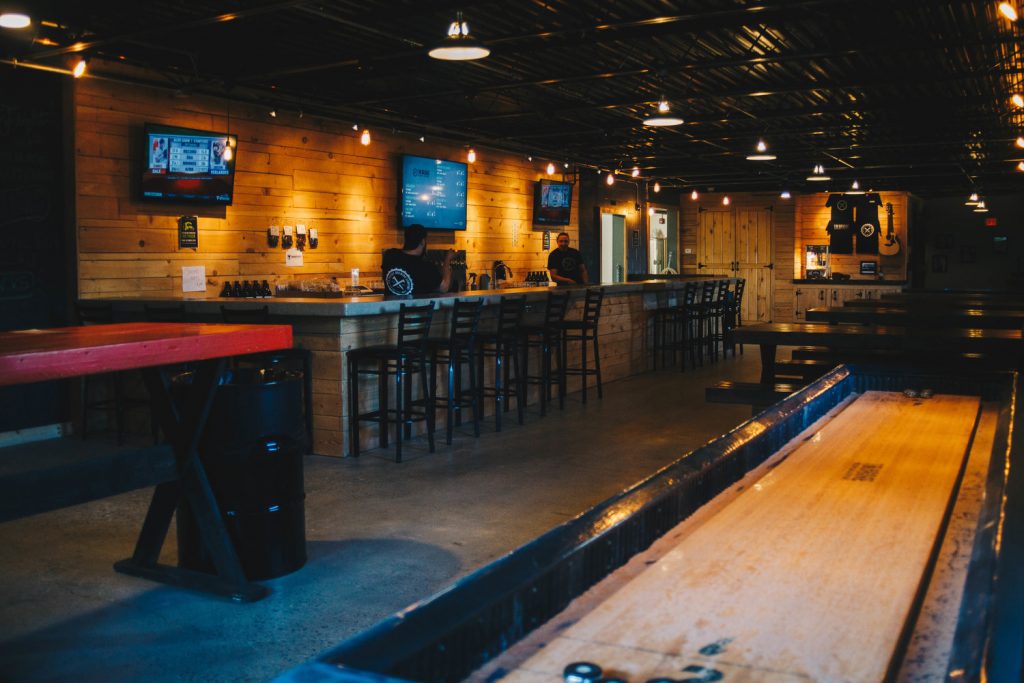 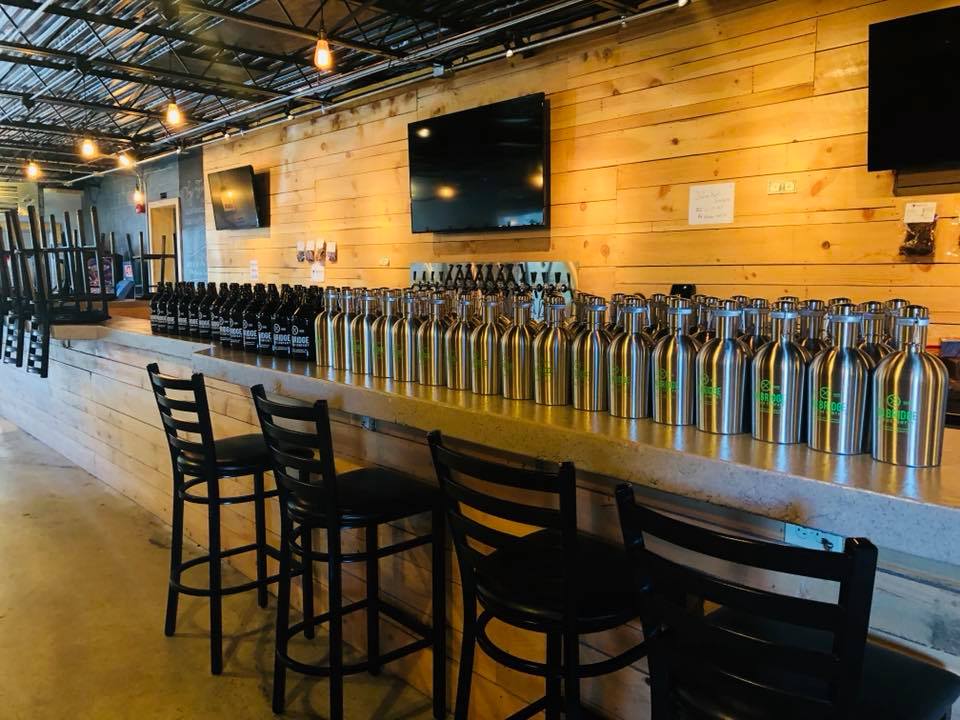 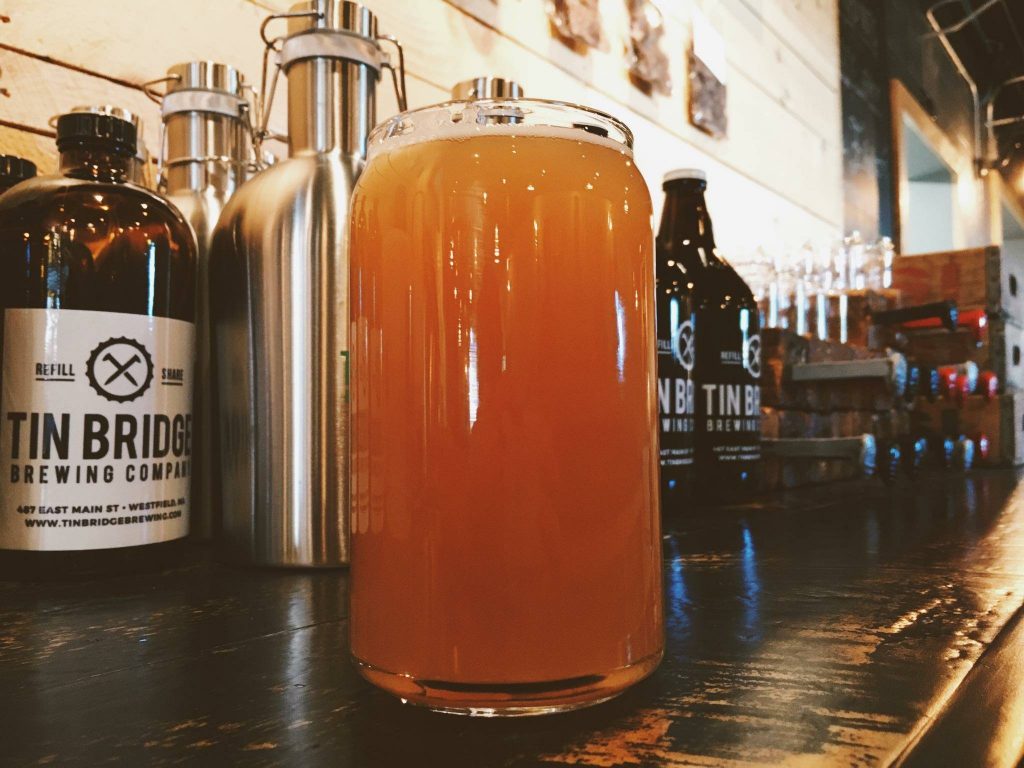 As the Valley’s local craft beer bubble continues to grow, Westfield looks primed for business. Downtown on Elm Street, Skyline Trading Company — a craft beer bar and homebrew shop — has proven a welcome recent addition to Westfield’s nightlife. And residents here often hop in the car (or on a bike) to visit the large barn that houses Westfield River Brewing Company in nearby Southwick.

But for the most part, Westfield occupies a quiet corner of the Valley craft beer map, half an hour distant from destination brewery towns like Ludlow and Easthampton. And the unexpected departure of one of the founders of Two Weeks Notice Brewing Company — a highly anticipated new Westfield craft brewery that had been set open this fall, but which is now on hiatus without a space — has added a disappointing wrinkle to the story of craft beer in this city (although co-founder and head brewer Mark Avery is still working on recipes, and he hopes to open locally in the future).

Enter Joe and Nick Cocchi, two brothers born and raised in Westfield who have spent the past few years building their homebrew operation into a commercial brewery, complete with taproom. Their new business, Tin Bridge Brewing Company, opened in Westfield in early October. The brewery is located at 487 East Main Street in the Big Y plaza, in a stand-alone building that the Cocchis have renovated into a sleek space that now features bar and communal table seating, wall-mounted TVs, a few classic arcade games, and a homemade shuffleboard.

This is new territory for these brothers. Joe, a member of the local metalcore band Within the Ruins, runs a small recording studio in Westfield, and Nick has spent the past several years on the road working for a national flooring company. In their off-hours, the brothers made time to homebrew, and for the past three and a half years they homed in on their original recipes. Nick explains that after growing too big for Joe’s kitchen, the two rented an 800 square foot garage in Agawam. “It was space for our passion,” he says. “We brewed there, and friends and family would come over. From there it kept growing, so we thought we’d take the next step.”

Now Nick is full-time at Tin Bridge, where he spearheads about three brews a week on their new five-barrel system (Joe, who continues to play and tour with his band, will remain self-employed). The brewery offers a wide range of beer styles, from IPAs to darker beers like a brown ale and a porter, plus an imperial stout and a blonde ale.

The brothers named the brewery after a local hangout spot where they spent time as kids: a nearby defunct railroad bridge that has succumbed, over the decades, to changing industry. And the building that houses the brewery has some sentimental value of its own: although it stood vacant for several years before the Cocchis bought it, 487 East Main Street had been the home of a little Westfield landmark called the Points East restaurant and lounge.

“Points East was pretty legendary in Westfield,” says Joe. “I think people are happy to be back in there.” Nick adds that their parents’ generation spent a lot of time at Points East: “When they moved into this neighborhood, our dad would come down here a lot with his buddies. It’s a nostalgic place.”

Tin Bridge relies on a variety of local food trucks — which so far has included Damn Yankees BBQ from Holyoke, Sun Kim Bop Korean food from Springfield, Eddie & Angie’s Food Engine from Westfield, Patruno’s Place from Blandford, and Murphy’s Mobile Irish pub food from Agawam — to keep its visitors fed throughout the week (the taproom is open Thursday through Sunday). But despite not having a food kitchen in-house, Joe and Nick are looking to grow a sort of cafe feeling at Tin Bridge.

“We tried to make this a really simple, comfortable place to just hang out, even if you don’t drink beer,” says Joe. “It can get busy and loud at night, but people can come during the day too, and bring their own food. Afternoons have been pretty calm so far — people stop in with their laptops. It’s great to have a place like that in Westfield.”

“It’s been a great crowd, and there’s a real age range of who’s coming in,” says Nick. “The craft beer community has spread to people in their early and mid twenties, but we also see people in their seventies here. Old high school friends have been stopping in. The feedback’s been great.”

The Cocchis acquired the building in spring 2016. Joe says that the financial investment was significant, but that the renovation project came in under budget, thanks to the fact that “we had a lot of help from basically every local contractor around.” Joe and Nick’s father is a painting contractor, their uncle is a plumber, one of their good friends is a carpenter, and many more wanted to pitch in.

Construction went fairly slowly, Joe says, “because we were all working our regular jobs.” The brew system arrived this past May, and the family installed it over the summer. Licensing took a little over a year.

Jay Bara is the taproom manager at Tin Bridge — and Joe and Nick’s uncle. “This was a family business from the start,” he says. “It would have been very difficult, or near impossible, if we didn’t have the family and close friends that we have … Everything in here, from the tables and bar to the bar back and shuffleboard table — was built by family and friends.”

The best selling beer so far, Bara says, is the Mosaic IPA. A session IPA called The Grip (named after an old family friend who frequented Points East back in the day) and an IPA called Radio Metal (in honor of Joe’s musical calling) have also done well. Bara says that Tin Bridge plans to regularly introduce new beers, although the brewery will offer some “staple” beers based on what turns out to be most popular beyond these first few weeks of business. The brewery opened with seven beers on tap, but has the capacity to offer several more at once.

“We’d like to introduce a new style or variation at least once a month,” Joe says. “Sometimes I think it’s hard for people to decide when there’s too much to choose from, so I think we’ll stick with eight to ten at most.” Tin Bridge currently sells 32 and 64-ounce growlers in addition to flight and pint pours, but Joe adds that he is also looking into canning machines, and the company has just ordered a new, larger fermenter.

“We’re just trying to save up right now, honestly,” he says, “But I’d love to do a limited amount of cans, and I’d like to get some kegs out to a few mom-and-pop restaurants. Everything we do, we try to help out Westfield, and bring people to town.”

Nick says he has especially been having fun chatting with local homebrewers who stop in. “It seems like everyone is homebrewing,” he says. “I love bouncing ideas back and forth. Homebrewers, we all start from the same place.”

“We’ve been getting a lot of good feedback, and a lot of support from everybody,” he adds. “It’s been a great experience so far. Everyone’s been really positive.”

The response, Joe says, has been surprising and gratifying. “We had no clue what to expect,” he says. “But I think the town, and the surrounding towns, have embraced this. Seeing kids in here, whole families … It’s exactly the environment we hoped we’d create.”

The taproom at Tin Bridge Brewing Company is open: