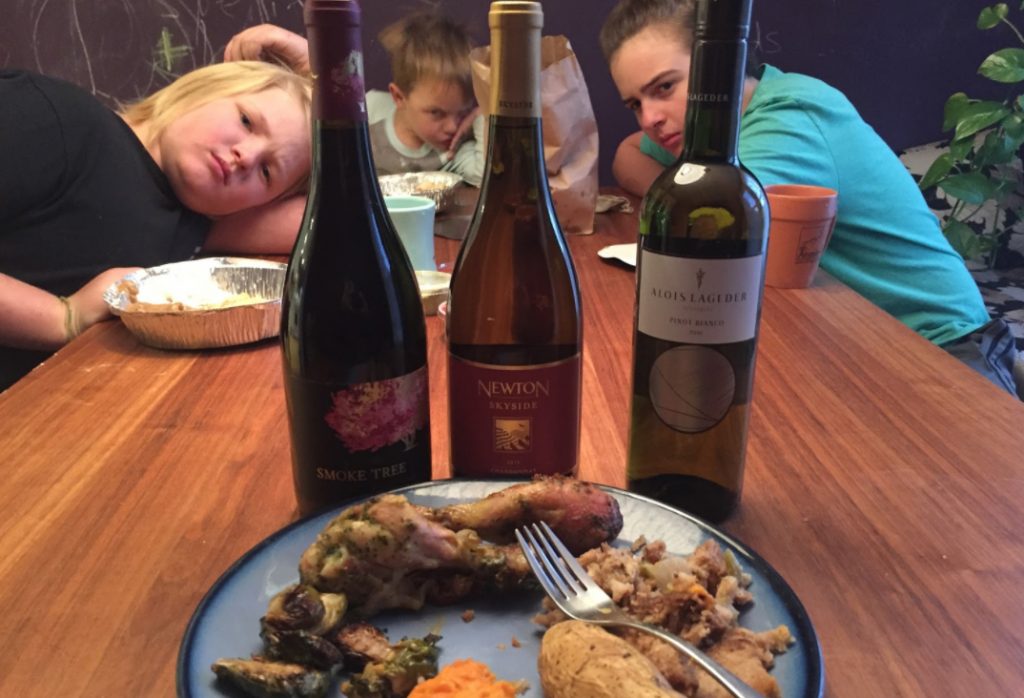 Thanksgiving: when (non-Native) Americans celebrate their favorite (made up) moments from (revisionist) history. A time when you will sit down to enjoy a feast  (with historically incorrect menu), lovingly seated around the table next to your (mouth-breathing) relatives. So before you begin debating your (racist) uncle about the pros and cons of the football team called the Redskins, raise a glass and drink wine macerated on actual red skins.

According to the larping “pilgrims” at Plimouth Plantation, the Pilgrims did drink wine. Mostly French, Spanish, and Portuguese wine. They likely paired it with lobster or some wild fowl. The problem with pairing wines with what is now the traditional Thanksgiving meal is that turkey is pretty bland and cranberry sauce is kind of ridiculous. The way it comes out of the can and maintains the shape of the can. Even the lines. It’s like fancy Jell-O. Who likes that? What are you, six years old? I hear homemade cranberry sauce is pretty good. But regardless, you are not going to find one magic bullet wine that is going to pair perfectly with the broad savory-to-sweet flavor spectrum of Thanksgiving dinner. So what do you do? Open lots of bottles and experiment.

Seeing as I had to write this column weeks before Thanksgiving, for my experiment I went to the hot bar at River Valley Coop and approximated a Thanksgiving meal. I found sourdough stuffing, whipped sweet potatoes with maple pecan, brussel sprouts, baked potatoes and…no turkey. But there was chicken!  If you’re the kind of American who goes the John Madden turducken route, at least I got the “ken.” Really, how different is the white meat of turkey from chicken? It’ll do for my experiment. I got the meal to go. My children were surprised when I brought them home take-out Mexican and then broke out my mini-Thanksgiving, and THREE bottles of wine to pair with it. No children, Daddy does not have a problem. He knows today is not Thanksgiving and he is doing research.

A good place to start for Thanksgiving wine research might be Burgundy — which generally means Pinot Noir for a red and Chardonnay for a white. But seeing as this is an American holiday, I drank Sonoma Pinot and Chardonnay. The Newton Skyside 2016 Sonoma County Chardonnay screams “I’M FROM CALIFORNIA!” So much perfume on the nose, I thought I was at my eighth grade dinner dance. Plus a strong scent of peanut brittle, which I guess means my dinner dance was not at a nut-free school. The buttery oakiness matched the buttery saltiness of the potatoes. Plus, the fatty saltiness of the skin of the “ken,” or perhaps the dark meat of the turkey would make the overt oakiness less cloyingly obvious. I’m not trying to damn this wine with faint praise. This is a classic California Chardonnay. Robert Parker, who is like the Roger Ebert of wine but less dead, called Newton “one of the world’s 100 greatest wine estates.” And come on, Sonoma was just on fire! Be thankful that they made wine last year that is still on the shelves today! Support the viniculture in California in 2017 when they really need you!

For the red skins (but never the Redskins) I tried the 2015 Smoke Tree Pinot Noir, also from Sonoma. It’s named after the rare smoke trees that grow in that area. The wine was created by famed California winemaker Joel Burt, who made his name at Domaine Chandon — a California project of Moët Hennessy. While I usually prefer French Pinot, this was my jam. Mostly because it didn’t taste like jam. Or cranberry sauce. Yuck. Whatever red wine you choose, it’s pretty much just going to go with the dark meat of turkey. Period. The End. It didn’t play well with the sweet potato or the stuffing. Maybe it would go with cranberry sauce if you’re into that sort of thing. But it was pretty great with the bird and not too bad with the brussel sprouts. I loved this wine. Good Pinot Noir tastes like bricks to me. I don’t eat bricks. But I don’t know how better to explain the flavor than all I can think of is “bricks!” when I have a good Pinot. This one had bricks, black cherry cola and smoke. I don’t think there were too many wildfires in Sonoma in 2015. But I smelled smoke in the wine. After all, the wine’s name is Smoke Tree.

The last wine I tried is a Thanksgiving classic: Riesling. My fellow wine snob, Ringo The Spirit Guide, says that Riesling is his favorite grape. It’s extremely versatile and it’s kind of hard to screw up as a winemaker. I tried one of his (and my) favorites, Dr. Loosen 2014 Blue Slate Riesling Kabinett from the Mosel region of Germany. Dr. Loosen could be a “doctor” like Dr. Phil is a “doctor” but I do not care. This wine tastes like sweet diesel fuel in the absolute best way. Remember the smell of your mom pumping gas while you were in the back seat of the car? Maybe you were eating some Sweet Tarts or something back there. Bottle that and it’s Dr. Loosen Riesling. It’s listed as medium sweet on the back of the bottle, which would normally turn me off, as I often pretend I like dry wines better. But don’t let the description turn you off. It’s great. The sweet matched the sweet of the sweet potatoes and it was great with the stuffing as well as the bird. All three of the wines I tried can be easily found locally for around $20 each.

Here’s the real rule of thumb for Thanksgiving wine: get wines that you already know you like. And get lots of bottles because lots of people will come over with varying pallets. Experiment! Make mistakes! Don’t ruin your Thanksgiving worrying about finding the perfect wine match. Ruin your Thanksgiving by getting into an epic fight with your racist uncle about why that stupid football team should just change its name already.