Having a Slice in the Pie-oneer Valley 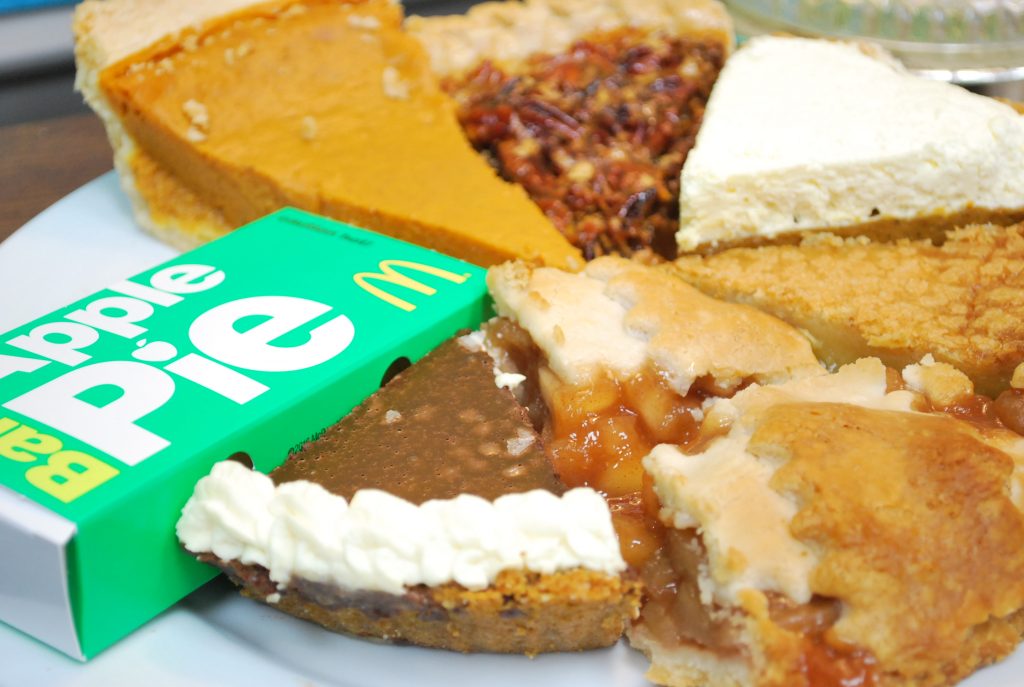 A flaky crust, delicious filling, and a bite of nostalgia make pie the dessert of choice for many. Whether it’s pie with a damn fine cup of coffee or a scoop of vanilla bean ice cream, you’ll instantly be transported to sweet comfort heaven with just a bite … if it’s good pie, that is. At its worst, bad pie can be like a slap across the face, whether it’s nasty ass chemical pie (we’re looking at you McDonald’s) or pie that tastes like it was made with canned apples and left on a tray for half a day. Members of the Advocate, myself, managing editor Dave Eisenstadter, art director Jen Levesque, and staff writer Meg Bantle ate our way through slices of our own Franken-pie creation, which we assembled out of slices we bought from restaurants, diners, and bakeries in the Pioneer Valley. Some were pie heaven. Others … well, read on.

A slice of pumpkin pie with whipped cream, $4.82

Dave: I like the cream and I like the spice a lot. Pumpkin pie is a smooth pie and this is satisfyingly smooth.

Jen: I don’t normally like pumpkin pie, but I’d eat that again.

Chris:  I really liked the crust. It was kind of doughy. It had that fried dough taste to it.

Jen: I absolutely loved it … The crust was kind of flaky, but not too hard or too dry. I’d have a whole piece of that.

Chris: When you take your first bite, you’re unprepared for getting sucked into a black hole of chocolatey goodness.

Meg:  It tastes like the jell of a pecan pie, I think. But technically it’s called a custard pie.

Dave: It’s kind of the velvet glove on the chocolate sock on the jaw that you get. It kind of cushions the amazing fudge.

Jen: The cinnamon is definitely overpowering in the pie. It’s almost like a cinnamon pie with a dash of apples. But I still like it. I think it’s good.

Chris: It tastes like someone who hates their job made this … There’s no love, man.

Meg:  I think what I look for in a fruit pie is farm freshness. Even if you’re making it from frozen fruit, the joy of a fruit pie is the fruit … This is burying the apples in a syrup.

Dave: It’s an apple pie. It wasn’t that amazing sock in the jaw experience that the last piece had, but it was homey.

Chris: My brain just said, ‘This is not pumpkin.’

Meg: People like pumpkin spice for a reason because it’s a really good spice profile.

Dave: This just kind of tastes like a vegetable I’m eating on a pie. It’s not sweet. There was no spice to it whatsoever.

A slice of salted chocolate pie, $4

Jen: I just fucking love pie. That was probably one of the best things I’ve eaten. It was perfect.

Chris: The salt wasn’t overpowering. It was just right.

Meg:  I was worried that it was going to be fudge on a crust. I actually liked the slightly lighter pudding texture … The crust was so good.

Dave: The best bite is that crust with the extra salt at the end. The chocolate itself is a pudding type thick chocolate, which was awesome … With that huge tidal wave of salt, you’re just like, “Wooow!”

Next door and across the planet.

Jen: I fucking love pie, but not that … It’s like a Hot Pocket, but imitation apple.

Chris: It didn’t disgust me, but it was eh. It tastes like a microwavable pie.

Jen: I thought it was good, but definitely wicked rich. I couldn’t finish a whole slice. That’s a sharing pie.

Chris: It’s on the verge of cloyingly sweet. I did enjoy it, but if I did eat an actual full sized slice of that I would just be disgusted with myself … I’m on the train to Diabetes-ville.

Meg:  It was a good pecan pie. It’s just not doing anything extra.

Dave: Some foods are able to do one thing and kick ass. I feel like this is a specialist pie. It’s extremely sweet and doesn’t let up.

Chris Goudreau can be reached at cgoudreau@valley advocate.com