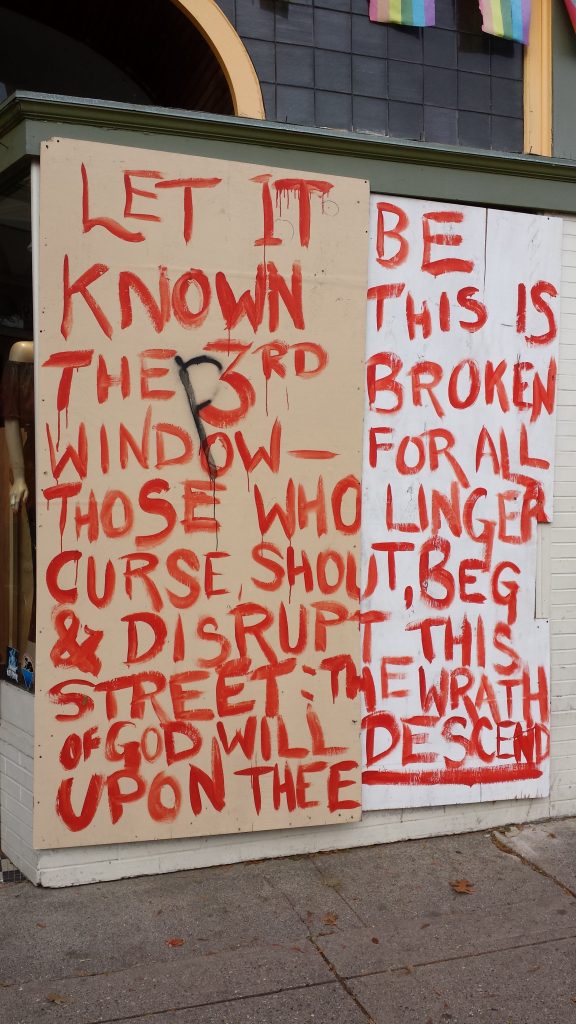 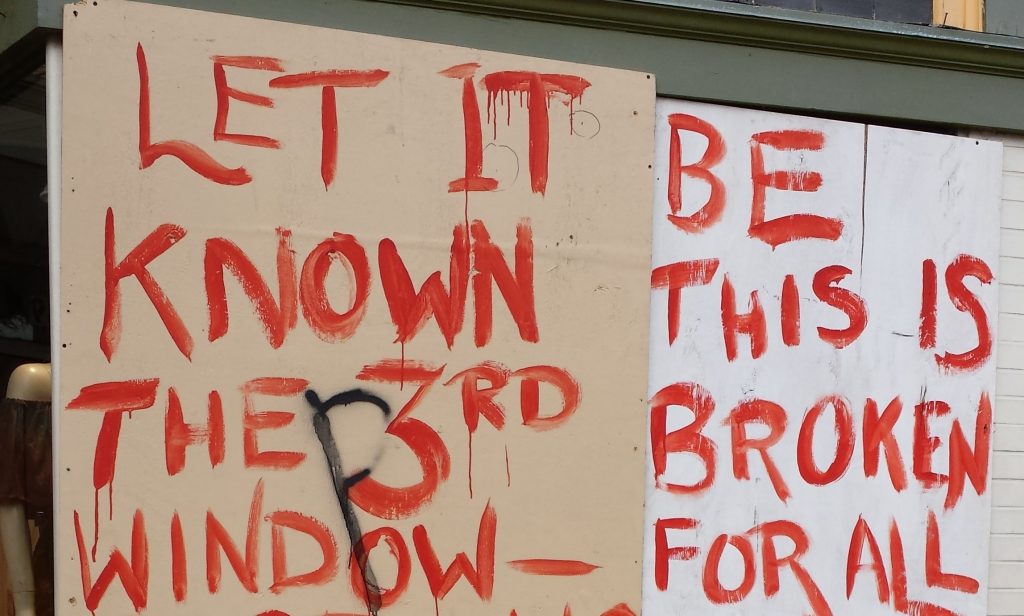 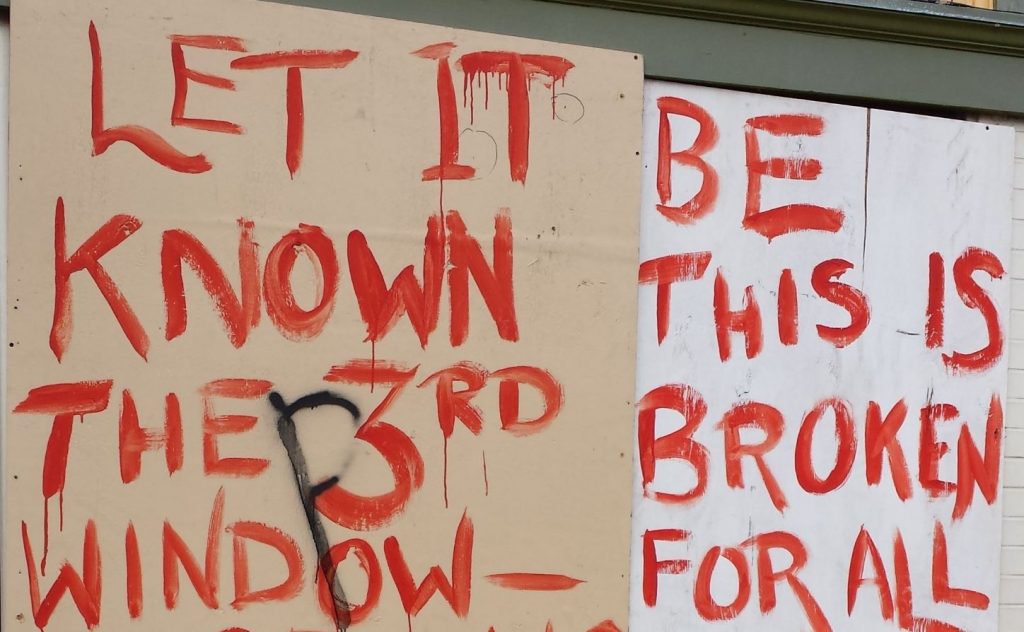 Two painted planks of wood covered one of the main display windows in front of Shop Therapy in Northampton on Monday morning. 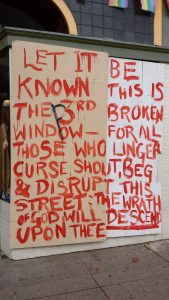 The smashed pane, which looked like someone’s elbow or head was pushed through it from the outside, was covered with a message in red capital letters painted on the wood:

“Let it be known this is the 3rd broken window — for all those who linger, curse, shout, beg & disrupt this street: the wrath of God will descend upon thee.”

Ronny Hazel, the owner of Shop Therapy, said that he painted the sign himself on Sunday night. The sign was taken down late Monday morning, but Hazel thought that its message was important.

“I’m fed up,” Hazel said. “I wanted to bring a little awareness, not to the broken window, but to the mess that’s going on in the street.”

Hazel said that he witnesses unruly behavior on a daily basis and painted the sign to draw attention to it.

He played down the biblical side of it, saying that he hoped the reference to the “wrath of God” would get people’s attention.

Reached on Monday, Mayor David Narkewicz said he hadn’t heard about the incident.

According to the police report, an officer responded to the vandalism at 7:10 p.m. Saturday evening and observed a large break in the bottom left of the front window pane causing spider cracks across the window pane. The officer learned that there had been an altercation between two unidentified men.

There are no suspects.

Erica Cole, a manager at Shop Therapy, said that the fight happened around 7 p.m. and disrupted the busy Bag Day sale that runs city wide. She also said Shop Therapy’s front windows have been broken three times in the past five years.

“It really killed off my business,” Cole said. “No one wants to get involved in a store where there’s broken glass.”

Cole was not working at the time, but said that an employee on duty was alerted to the fight by an unidentified woman. Cole also said that the police were called around 2 p.m. that afternoon because the same men were fighting nearby in front of Pinch Goods, a few buildings away.

Cole described the men as drunk and unruly.

Cole said that disorderly conduct is an ongoing issue on Main Street that customers have complained about it to Shop Therapy staff. The front window was broken when the the shop first opened four years ago and again a year and a half ago after a similar fight, she said.

Pinch owner Jena Sujat wrote an op-ed for the Daily Hampshire Gazette in September that addressed some of the issues that she faces as a business owner on Main Street. In an interview, she said that she has heard from customers who don’t like to go downtown any more and that she believes there are drug sales and drug use on her block. Sujat said that she doesn’t feel very supported by the city council, the police, or Mayor Narkewicz at times. She agreed with Cole that having a bigger police presence on her block might change things.

“I wonder if the security cameras would help because I’m at my wits end. I’m calling the police a few times a day,” Sujat said. “I’m policing the sidewalk instead of running my business.”

At the Haymarket Cafe, Assistant Manager Hilary Talbot said that they have not had the same problems with vandalism. She said that people come into the cafe primarily to use the bathroom, and that in general the space is respected. Over the summer there was a problem with drug paraphernalia being left in the bathrooms, but when the Haymarket put up a sign, the problem went away.

“We try to make this a safe space for people,” Talbot said.

Cole said that she would like to see more uniform police walking the sidewalk on Main Street.

“Personally I think the police force is a little short handed,” she said.

Northampton Police Captain John Cartledge said that there is an officer downtown on foot 24-hours a day in addition to bike patrol and officers who park their cruisers and walk around the area.

“There is an officer specifically assigned to Main Street,” he said. “Certainly we’re busy at times as far as staffing, (but) the budget is what it is. I think we manage pretty well for our staffing levels,” he said.