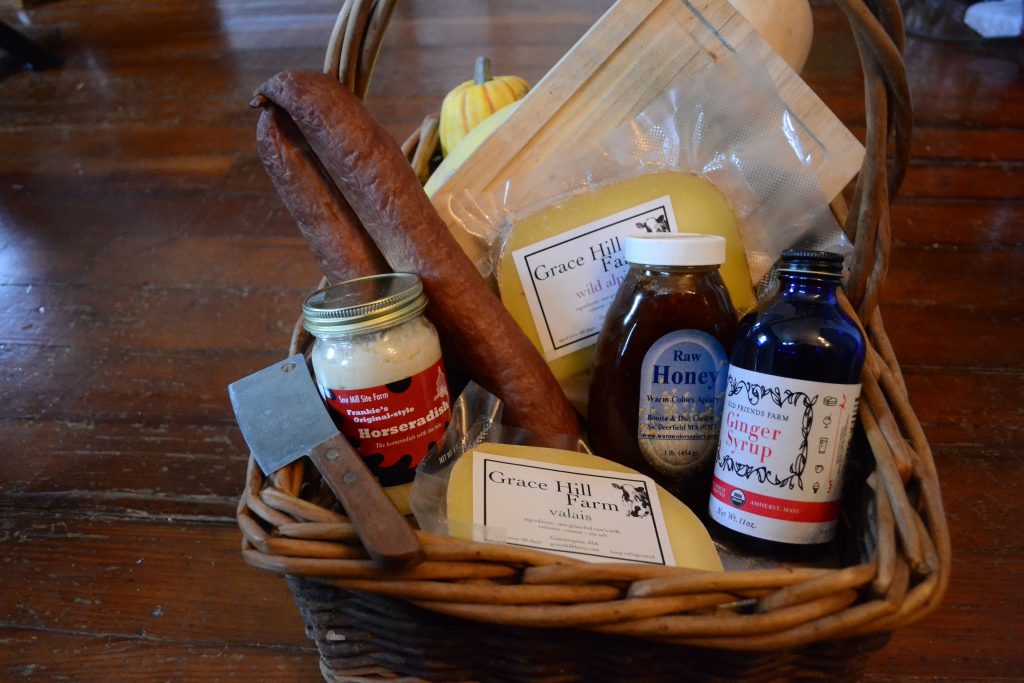 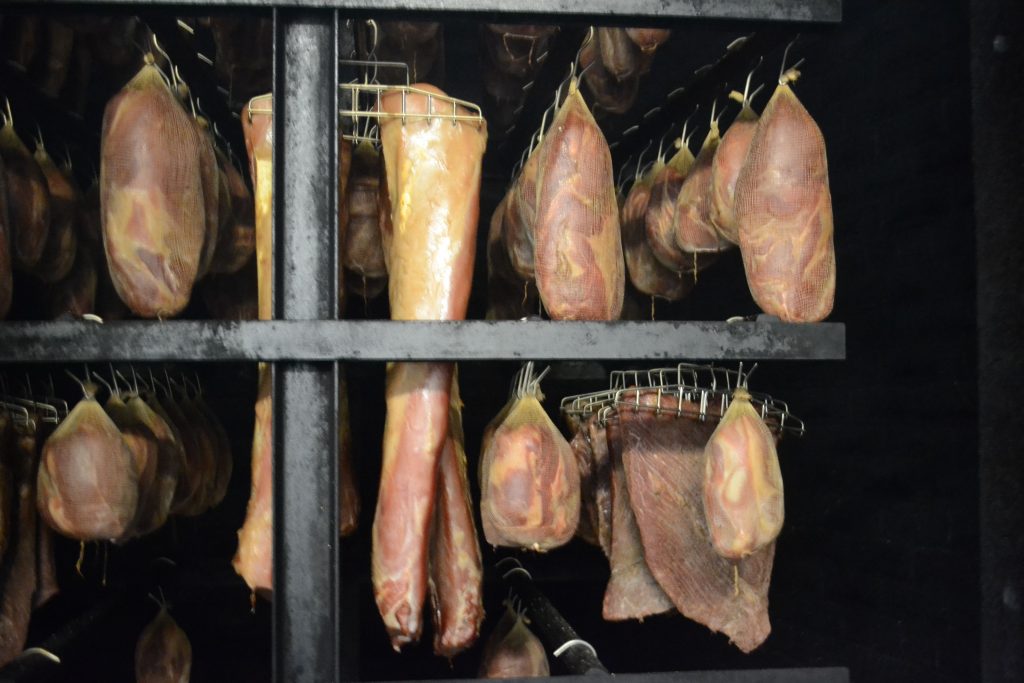 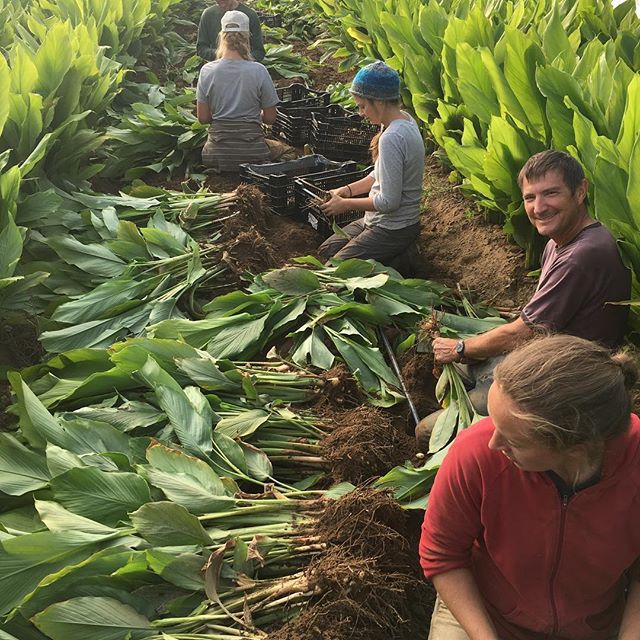 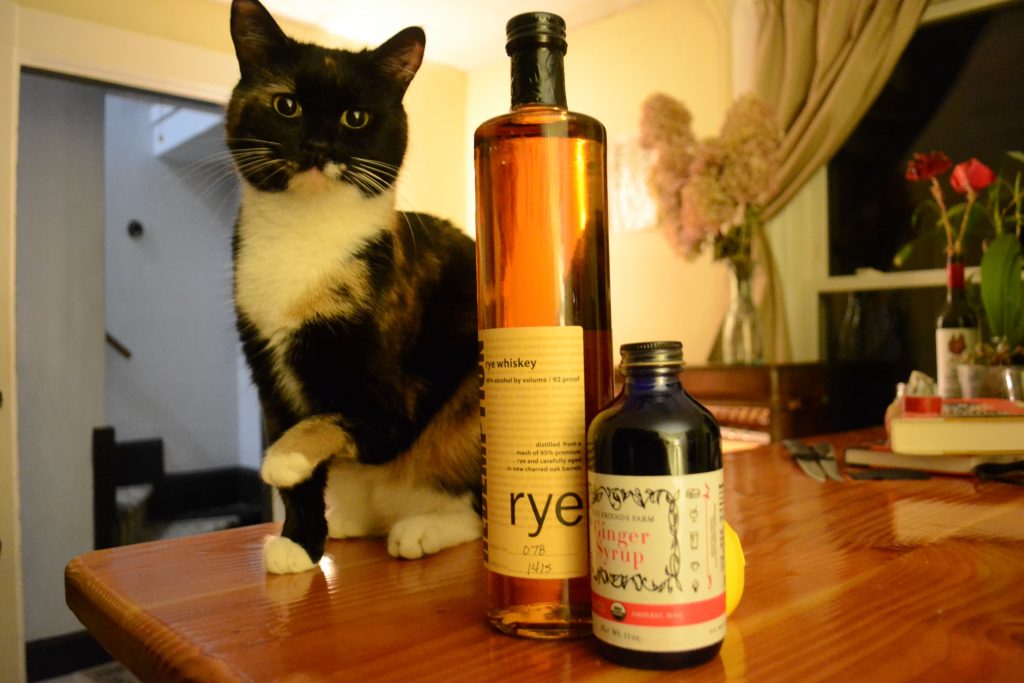 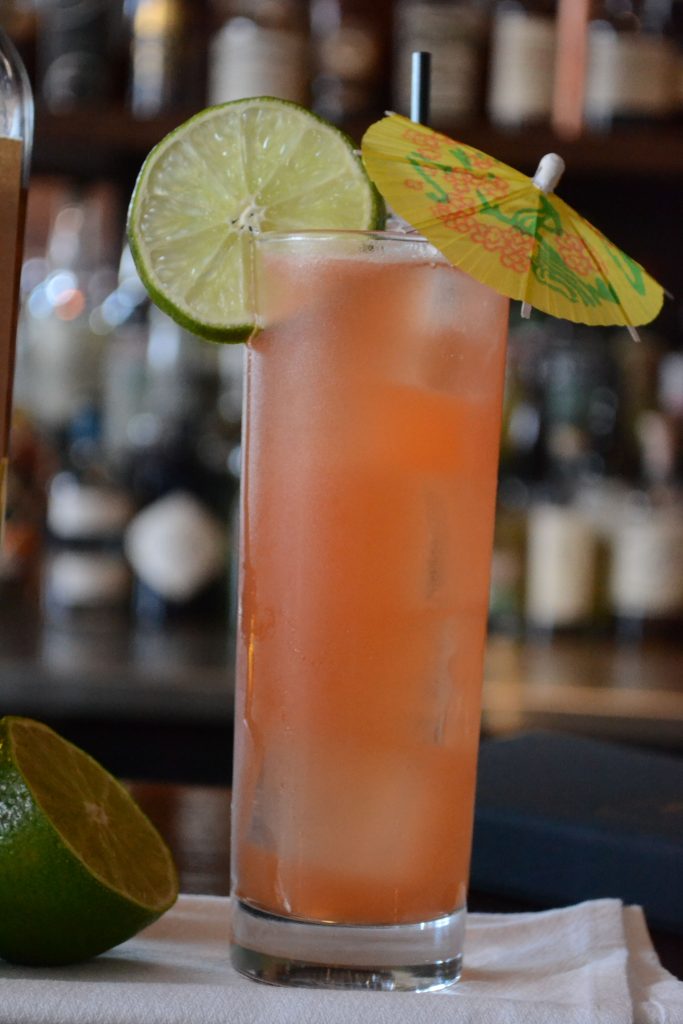 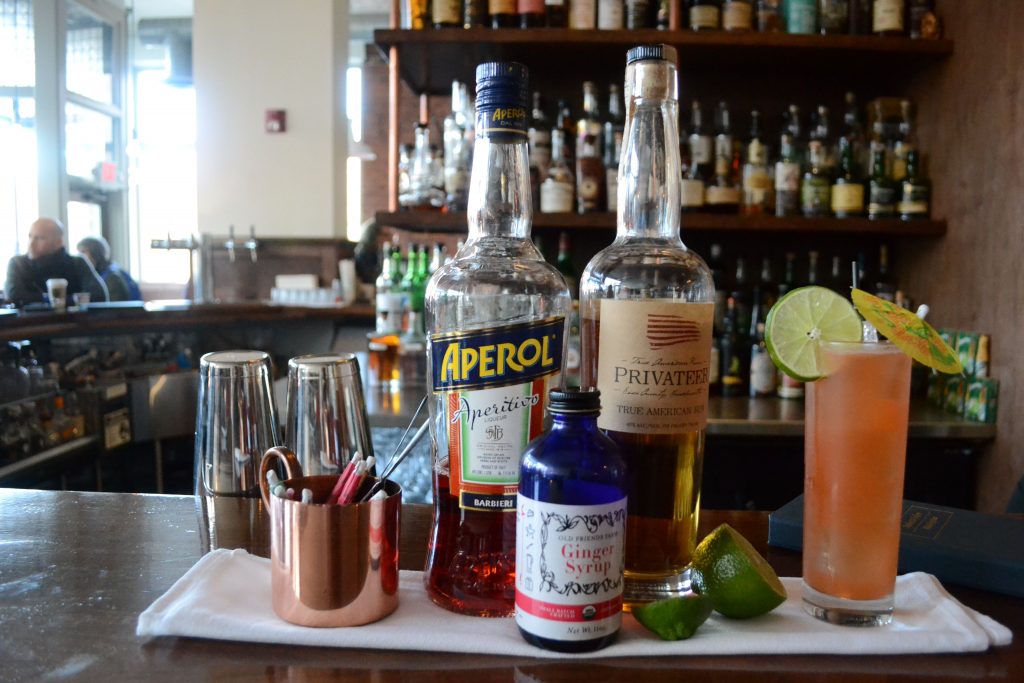 The bar at Amherst Coffee. Photo by Meg Bantle. 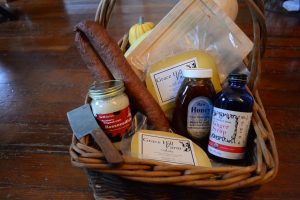 As a self-identified foodie, the holiday season is one of my favorite times of year. I get to eat food, make food, and give food away basically non-stop through the New Year. Whether it’s something that I canned over the summer or a product made by a local company, putting a few specialty food items together instantly makes a great gift basket or starting point for a cocktail party with friends. I went out in search of everything you need to host the ultimate cocktail hour, where you can impress with incredible tasting local products and save yourself money by not eating out. The best part is that many of these products can also be packaged together as a gorgeous local-food basket that would make a great gift for the food connoisseur in your life.

Smoke ‘em if you’ve got ‘em

Given the freezing temperatures and looming threat of snow, it’s easy to think that you can’t eat local this time of year. I hope that by the end of this article, you’ll have no doubt that there’s an abundance of food still being produced right here in the Pioneer Valley. While some products are available fresh, farmers and producers use various preserving processes to preserve food long beyond the harvest.

At Pekarski’s Sausage in South Deerfield, Mike Pekarski is continuing the work that his grandparents started when they opened their business in 1948: smoking meat. The aroma of the business is almost as famous as the meat. The whole building smells like smoky, flavorful, drool-worthy meat. Pekarski’s grandparents opened the business to provide a custom slaughterhouse for local farmers. He explained that before electric refrigerators, brining and smoking fresh meat was one of the only ways to ensure a source of protein through the winter.

“People had to do it to survive,” Pekarski said. “Throughout the years it became a luxury, not a necessity. Now it’s traditional.” 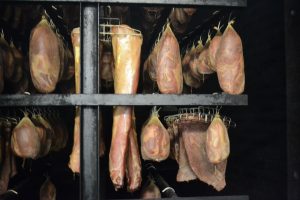 Some things have not changed in the two and a half decades that Pekarski has been running the family business. They still brine and smoke all of their meat in house to give them their authentic smoky flavor. Pekarski showed me the brick room where Canadian bacon, daisy ham, and pastrami were hanging above an open hickory fire to cure. While the hickory smoke makes the meat taste amazing, it’s the salty brine that the meats soak in beforehand that do the real preservation work. Pekarski said that he has reduced the salt content in every traditional recipe by at least half because today the brine is more for flavor than for preservation.

The salt content is not the only thing that has changed about Pekarski’s offerings. Pekarski said that he has expanded his grandparents original six recipes to nearly 50 different recipes that he developed and perfected in house.

The quality smoked meats that Pekarski is making in South Deerfield have been long-time favorites with people all over the Valley. Pekarski said that in the 26 years since he and his parents reopened the business, he has watched generations of people come through his shop door.

“I’ve watched toddlers become adults and they still gravitate back to my shop,” he said.

People come from all over the East Coast come back year after year because they can’t get a similar product anywhere else.

“They smell the garlic and the hickory and it’s like they’re in a trance,” Pekarski said.

Pekarski’s sausages are only available from their shop in South Deerfield. 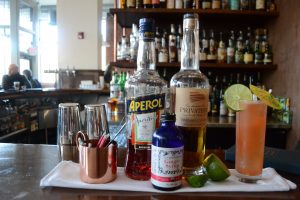 The bar at Amherst Coffee. Photo by Meg Bantle.

Down the road in Amherst, Casey Steinberg and Missy Bahret co-own and manage Old Friends Farm where they preserve their farm’s harvest in a totally different way. By bottling syrups and honeys made from their farm-grown ginger and turmeric, Steinberg and Bahret make shelf stable products that are great for eating and giving around the holidays. Their Organic Ginger Syrup was just selected as a finalist for the 2018 Good Food Awards, a national contest for American food producers and farmers, and is getting a lot of well-deserved praise for being a locally made ginger syrup that uses New England grown ginger.

Steinberg and Bahret had to pioneer growing ginger in New England before they could dream up their incredible ginger syrup. Steinberg said that the hoophouse used in the spring to start seeds was going unused in the hotter summer months.

“We asked ourselves, what do we like to eat, and what isn’t currently available locally?” Steinberg said.

Ginger and turmeric are both heat loving and slow growing, so it was a perfect match. Once the ginger is grown, the ginger syrup is made by combining fresh ginger juice with organic cane sugar and organic lemon juice in small batches. Steinberg said that the ginger is harvested all at once, in late fall, so the amount of syrup produced each year is finite, which makes it all the more special. Creating value-added products like the ginger syrup has a lot of benefits. Not only does it allow the consumer to have access to locally grown ginger all year long, but it also provides work for some of the farm crew outside of the normal season.

“It’s still unique in that it has a great farm story behind it,” Steinberg said.

There are a lot of great uses for ginger syrup, but I think my favorite is in drinks. I called my friend Anna Gyorgy, who is a bartender at Amherst Coffee, for some ideas. She absolutely blew me away with the tiki-inspired cocktail she made, which she named the Halsey Street Dream as an homage to her favorite bodega in New York City. 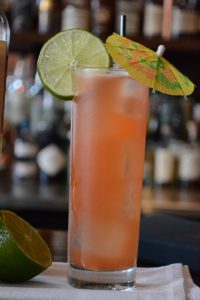 She started with a base of Privateer Amber Rum, which is a spirit made in Ipswich that totally deserves your attention. Then, she added some Aperol, some lime juice, and of course some Old Friends Farm Ginger Syrup, then gave it a quick shake. The result was a gorgeous peach-colored liquid that she poured over ice into a Collins glass and topped off with some nice ginger beer. I loved the spiciness of the ginger and that it wasn’t too sweet. I could almost hear the gentle pluck of ukuleles and feel a soft ocean breeze. If you’re looking to get away from it all, but you can’t afford to leave, this might be the perfect thing.

Up in the Hilltowns, Max and Amy Breiteneicher are preserving the taste of summer with their incredible raw cow’s milk cheeses at Grace Hill farm. The couple bought their Cummington farm in 2012. Max Breiteneicher explained that essentially, cheese is just preserved milk. While there are a vast number of styles of cheeses available today, most cheese is made with the same basic three steps: Culturing the milk with bacteria, adding rennet (or acid) to separate the proteins and fats from the liquid, and cutting, stirring, and heating the remaining solids. By varying those processes and adding time to age the cheese, people are able to create thousands of different varieties.

When it comes to preservation, the more liquid that is removed from the cheese, the longer it will last. Max Breiteneicher said that a hard cheese, like parmesan, is cooked at a high temperature for a long time so the end product has very little moisture left, which is why parmesan wheels can last for years without ever spoiling.

Two of Grace Hill’s cheeses, Valais and Wild Alpine, are styled specific European cheeses called Alpine cheeses. Max Breiteneicher explained that in the Alpine region of Europe, farmers lead their cows up the mountains in the spring as the snow melts, and then down the mountain later in the season when the snow returns. The season is so short that traditional Alpine cheese is produced on the mountainside where the cattle are grazing. Transforming the milk into cheese allows the farmers to have the milk protein through the winter.

“You’re preserving a time and a place,” Max Breiteneicher said. “We do something like that. On a mountainside, following the growth of each field and moving the cows every 12 hours or so.”

What makes Grace Hill’s cheeses so special is that they quite literally convert the lush growth of summer into a product that can be eaten year round. Max Breiteneicher said that because milk has such a delicate flavor, what the cows eat can really change the way the milk tastes, which in turn can change the way the cheese tastes. To me, the variability in the cheeses is part of what makes them so special, even though that variability is subtle.