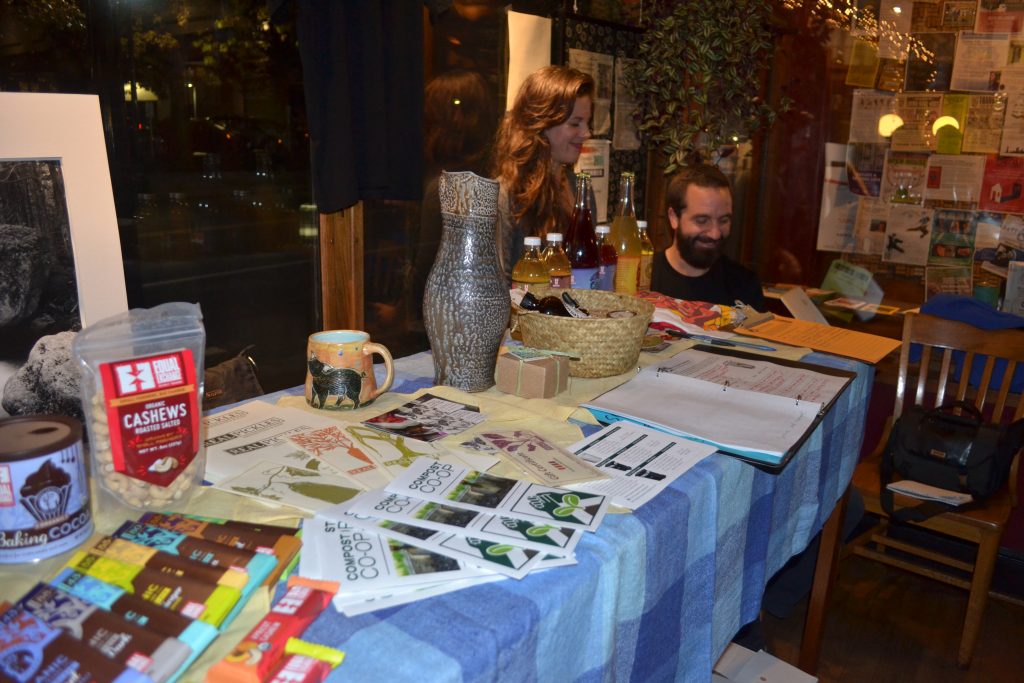 A fundraiser at the People's Pint in Greenfield. Photo by Meg Bantle. 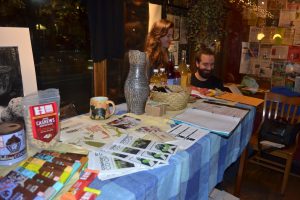 A fundraiser at the People’s Pint in Greenfield. Photo by Meg Bantle.

Many residents of Greenfield will have an additional bucket on their curb next year. The Compost Cooperative is a newly formed worker-owned business that is going to start picking up commercial and residential compost in in Greenfield in 2018.

The idea for the Compost Cooperative was born three years ago when a few educators and local cooperative business owners who were teaching at the Franklin County Sheriff’s Office (FSCO) started to discuss the difficulties that people face after getting released from jail or prison.

Sociologist Revan Schendler, who is one of the developers with the project, said that in her seven years of teaching at FCSO, she’s noticed a lot of people coming back to jail or prison after getting released, usually due to violating their probation or parole.

“There’s so many things people need to stay out of jail or prison,” Schendler said. “Once you get caught in the system it’s really hard to extract yourself.”

The Cooperative was formed to help people after re-entry to have more than just a minimum wage job. The developers of the Co-op got early support from FCSO and Greenfield Community College to lead a class this past summer where men from the FCSO were able to work as interns with the Co-op and earn college credits at GCC. The hope is that those same interns will be able to become worker-owners and eventually run the business without the developers.

“Unless the people who are going to be worker-owners are part of the development of the cooperative they’ll never feel the same ownership over it,” said Andrew Stachiw, another developer.

During the summer course, the interns and developers worked on a business plan for the Compost Cooperative, did market research, and completed feasibility studies. Stachiw, who is a worker-owner at the Toolbox for Education and Social Action (the makers of the Rise Up! activist board game), said that the cooperative business model is really important to the team’s mission, which is, among other things, to build sustainable opportunities for people who face barriers to employment and social engagement.

“Having economic determination and ownership meant a lot to the folks getting out,” Stachiw said.

Stachiw explained that in addition to being an empowering business, a co-op also allows the worker-owners to control the work, meaning that they can provide an infrastructure that supports people getting out of prison or jail who might have court dates.

“It eliminates the power complex,” said worker-owner Gerard Curtis. “It’s equality in the workplace at its finest.”

The Compost Co-op will offer several different sized compost pickup options, including a five-gallon bucket for home pickups. The residential pickups will be done by bicycle power, which is another intentional choice made by the worker-owners to provide work for people who do not have a licence. Curtis said that the bicycle powered work is a great way to keep in shape and do good for the environment.

The Compost Co-op is currently raising money to cover some of the start-up costs of the business, including bicycles and a truck. Schendler said that the social support network that many people rely on when they need support is not available to many people in prison, so they are forced to rely on the state.

“The state’s investment in young people is decreasing and their investment in incarceration is increasing,” Schendler said. “We have no money, but we have a lot of social capital, and we’re trying to use our capital to build economic infrastructure.”

The Compost Co-op will pick up organic waste from around Greenfield and bring it to Martin’s farm, which is within biking distance from town, to be composted. Amy Donovan, Program Director for the Franklin County Solid Waste Management, said that even though Greenfield’s larger institutions, including its schools, are already composting, there’s no curbside compost option for residents and small businesses.

Down the road in Northampton, the Pedal People co-op has been running a similar bicycle-powered cooperative business for 15 years.

“This is exactly the kind of business we want to support,” said Alex Jarrett, a worker-owner at Pedal People. “Independently functioning co-ops working together.”

Joshua Freund, a compost expert and third developer for the Compost Co-op, said that opening an organic waste business will do just as much for the community as it will for the environment.

“It’s really important for people who have been stigmatized and marginalized from their community to feel connected in a way that people already respond to,” Freund said. “Being able to communicate in a language that the community is apt to respond to is a recipe for success. And agriculture is that in Franklin County.”

Stachiw expressed a similar thought and said that the group of interns and developers were attracted to the regenerative nature of compost.

“We treat the folks who have been inside as dispensable,” Stachiw said. “But they’re not dispensable. They have so much to give.”

For Curtis, the idea that developers like Freund, Stachiw, and Schendler would offer to help start a business that will eventually be run by 100 percent formerly incarcerated people is incredible.

“To know that your past doesn’t have to be who you are, that you can still be a business owner, it’s amazing,” Curtis said. “Society still cares.”