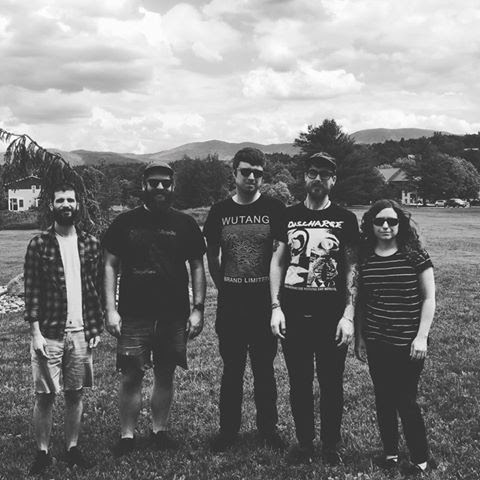 The joke about Eastampton shoegazers Kindling is that if they play a house show, some uptight neighbor might call the cops. There’s a reason for this: Kindling is very loud. Too loud for poorly insulated residential basements. When they play gigs, their three guitarists and bassist — Stephen Pierce, Gretchen Williams, Jeff Stevens, and Aaron Snow — bring a whole showroom worth of amps; probably equivalent to every member’s body-weight, or more. Drummer Andy Skelly’s drum kit is also quite large — the bass drum is enormous, about the size of your average stove-oven combo. With all of this industrious rock ‘n’ roll equipment is the ability to make quite industrious music. Put differently, their rigs might move the room they’re playing in — quite literally — but they also move the people in it.

Kindling just released their second full album, Hush, last month, which is technically their third release this year — after an EP, No Generation, in February and a split with Kestrels from Nova Scotia in April — on 6131 Records. And Hush is certainly the culmination of all of their hard work.

While Kindling does exist within the Shoegaze genre — made famous in the ‘80s by bands like My Bloody Valentine for their loud guitars and soft, subtle vocals — they have perfected their sound: loud and crushing ‘gaze over existential, lush melodies and inescapable riffs. The opener, “For Olive,” featuring sitar by Anthony Saffery, has been stuck in my head for days. The album is precise and dynamic with lots of variation, giving the songs and melodies room to dialogue with one another, and making for an engaging listen. For instance, the usual throbbing, pulsing fare juxtaposes nicely with a song like “Rain,” without drums, but still thick and tinged with reverb.

The press release that came with the record is pretty funny; it describes the Valley scene as an “insular environment that seems to breed a special kind of ambitious individualism.” Presumably aimed at writers not from the Valley, it invokes that Kindling is interesting because they’re from the Valley, which isn’t a big city, and is where The Pixies, Dinosaur Jr., and Speedy Ortiz are from. Gotta have a little hometown pride I guess — it isn’t Brooklyn and, if this record is any indication, there is good music here.

Another link to that lineage is Valley superproducer Justin Pizzoferrato, who recorded Hush and has worked with them on many releases in the past, including their first record, Everywhere Else, and, also, all of the bands in the paragraph above. The pairing makes sense. Pizzoferrato (who I’ve also worked with) knows how to make loud music sound detailed and thick, often doubling tracks and adding other magic to make it sound much crisper than it does in DIY spaces.

Put on your headphones (or earplugs at a show) and expect to be moved both emotionally and physically. These sweeping, emotional songs are Kindling at their fine-tuned best.