Stagestruck: It’s Bedlam on These Stages 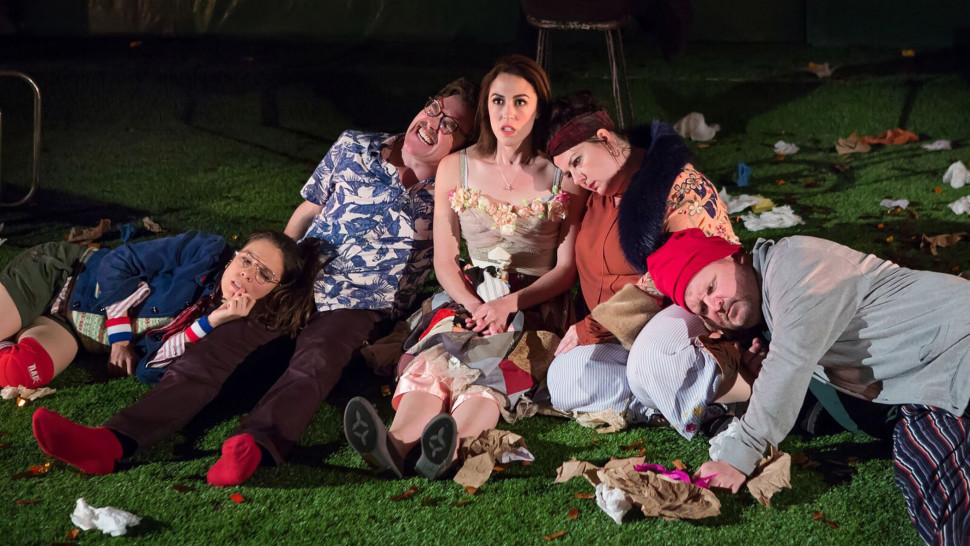 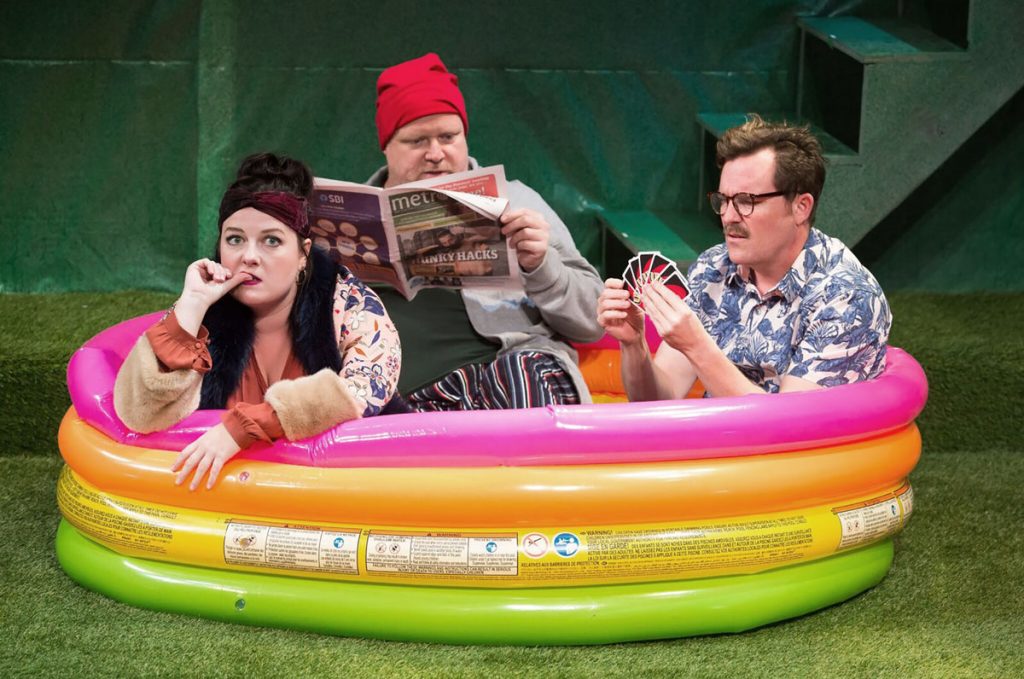 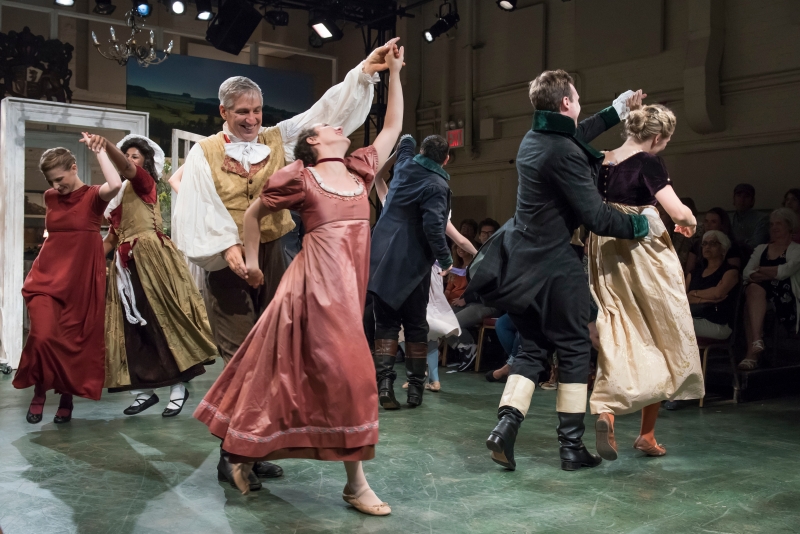 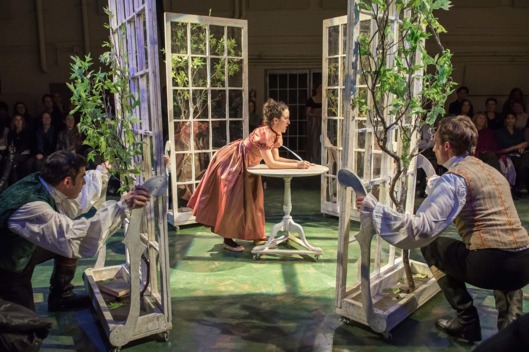 “Bedlam” is an apt moniker for the ever-adventurous theater company going by that name. Their whirlwind adaptation of Jane Austen’s Sense and Sensibility recently wowed New York (and comes to Cambridge beginning this weekend – see below). Now they’re back on sort-of Broadway with an equally inventive, if less affectionate – and less effective – version of another treasured classic: Peter Pan.

Bedlam is a peripatetic troupe, performing in guest quarters in the city and on the road. Here they’ve landed at The Duke on 42nd Street, an intimate tucked-away space with a classy address, through Dec. 23rd. The simple set is mostly three walls painted various shades of green, floored in Astroturf. When we move from the Darlings’ London townhouse to Neverland, a lagoon – er, plastic wading pool – is added.

As ever with Bedlam, the style is eclectic and imaginatively physical, with an ensemble of six playing all the parts, often changing character in full view onstage. (My favorite of these transformations was Brad Heberlee morphing from Nana the sheepdog-governess into Peter Pan.) The show was devised by the company, drawing from the text of J.M. Barry’s original 1904 play, under co-founder Eric Tucker’s direction (he’s also in it, as Mr. Darling as well as a pirate and a Lost Boy). The improvisational genesis is evident in the performance. 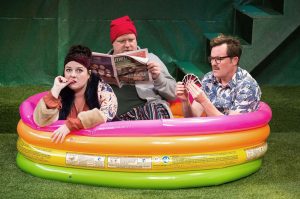 There’s a slapdash, scattershot approach that favors snarky gags over storytelling, and what’s perhaps intended as a fun-loving deconstruction of the original too often comes across as an SNL-class  lampoon. The opening scene in the Darlings’ nursery is performed in a sarcastic parody of Barry’s stilted Edwardian locutions. Zuzanna Szadkowski plays both a randy Captain Hook and a showy Mrs. Darling, and near the end the two personas merge in a demented enactment of the mother’s grief over her missing children. And in case we hadn’t guessed this Peter Pan is not for children, Peter’s inevitable plea for applause to save Tinkerbell has a cynical fuck-you payoff.

The cast includes two familiar faces from summers at Shakespeare & Company: Susannah Millonzi is a bratty young Michael Darling and an even brattier, chain-smoking Tinkerbell; and Kelley Curran is Wendy, whose interest in Peter here is more libidinous than maternal. (Oh yes, this is quite a sexy fairytale, crammed with innuendo both verbal and physical.)

There are some moments that neatly capture Bedlam’s mischievous, forthright performance style. The technical hurdle of the play’s flying sequences – on a low budget under a low ceiling — is amusingly sidestepped, as the Darling children simply stand there and a voice-over details the history of theatrical flying rigs. But in the end, this awkward production takes away more than it gives, mocking its source’s clichés while missing its heart.

I’d recommend, instead, going to Cambridge for Bedlam’s Sense & Sensibility (closer to the Valley too), which I saw caught in New York last season.

This nonstop, high-energy romp gets as many laughs from its blocking – no, let’s call it choreography, of both people and objects – as from Kate Hamill’s artful adaptation of Austen’s witty 1811 novel. (Hamill has suddenly become one the country’s most-produced playwrights, by the way, with coast-to-coast productions and her new version of Pride and Prejudice now playing in New York.)

Chairs-on-wheels spin into place for dining scenes and tête-à-têtes, arbors strung with vines and flowers shelter garden trysts (and eavesdroppers) and a moving doorway ushers visitors in and out of invisible rooms. Along with their quick-change characters, the actors become teams of horses, parkland statuary, even bedside tables. 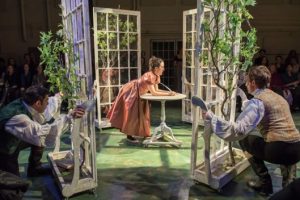 This flash and dazzle is, well, dazzling, but most of it is in the interest of efficient storytelling – the story here being the one about the penniless Dashwood sisters, sensible Elinor and sensitive Marianne, who lose their hearts to a pair of apparent cads. It also gives Austen’s understated satire – of aristocratic snobbery, social-climbing pretensions, et al. – an energy boost, bringing the large cast of characters to comedic if sometimes almost cartoonish life.

While the stage is almost always in motion, there’s emotion aplenty as well. The actors bring both high spirits and real feeling to their roles – and most of them handle several of those. Indeed, a couple of minor characters are played by multiple actors in turn, without regard to race or gender.

A frequent Shakespeare & Company presence turns up in this one, too. Nigel Gore joins the Bedlam cast in Cambridge at the American Repertory Theatre (ART), opening Sunday and playing through mid-January.

And there’s more Bedlam to come. In March, a revival of one of the company’s early triumphs comes to Arts Emerson in Boston. It’s a tour de force that encapsulates two towering classics – Shakespeare’s Hamlet and Shaw’s Saint Joan – performed by the same four-person cast in alternating repertory, both of them playful, ingenious and utterly respectful.