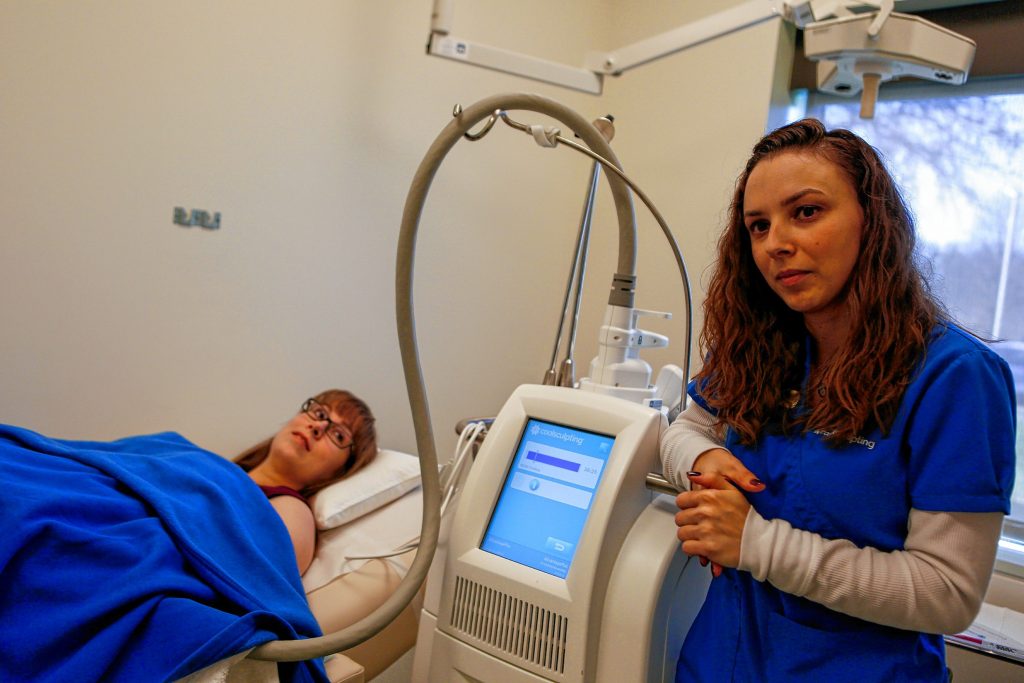 Carter, left, getting her third treatment, says it feels like “you have a big ice pack on you” and then the area being treated goes numb. Administering Carter’s treatment at Hampshire Dermatology in Northampton is technician and medical assistant Maria Paiva. 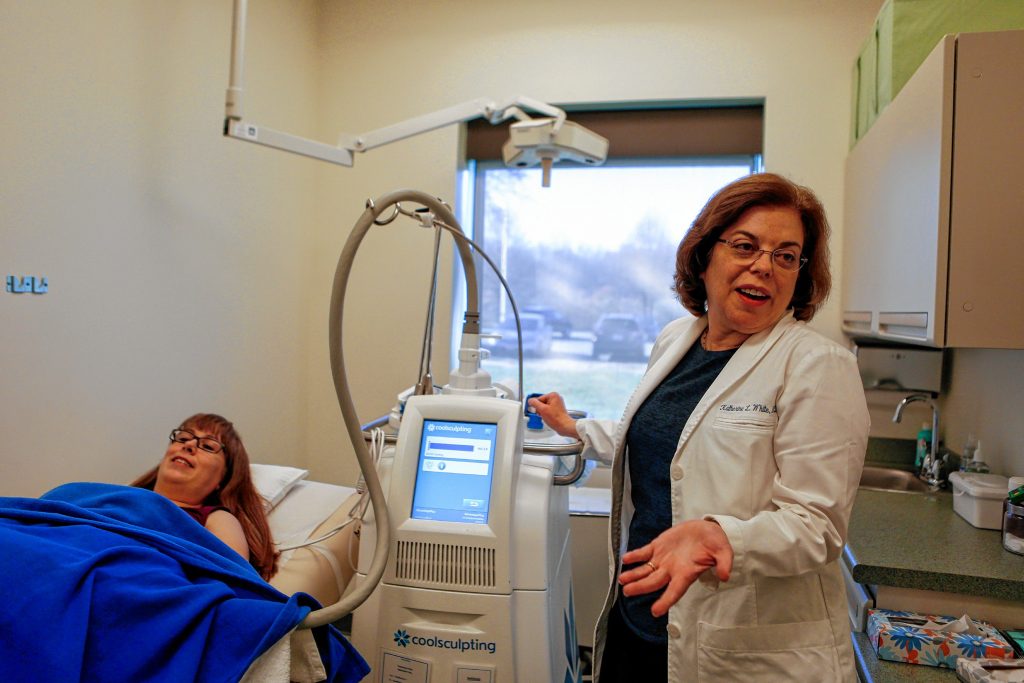 Dr. Katherine L. White describes how CoolSculpting works at her office at Hampshire Dermatology in Northampton while Carter, who works for her, receives the treatment. 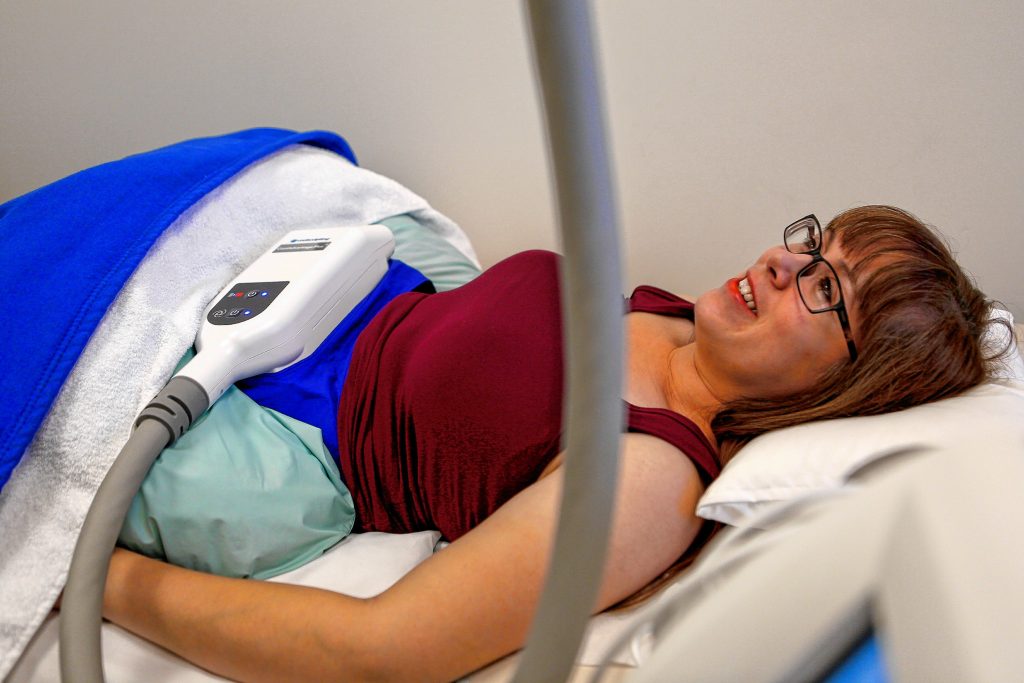 Medical assistant Jill Carter says she sought the CoolSculpting treatment to rid herself of stubborn fat left after she gave birth to three children. 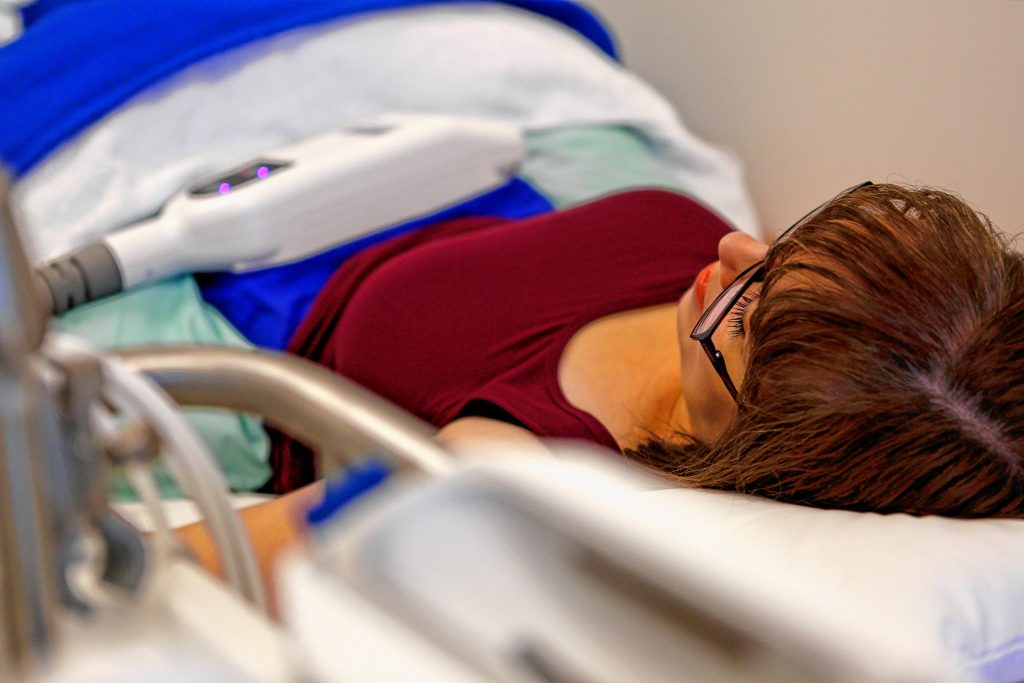 Medical assistant Jill Carter says she sought the treatment to rids herself of stubborn fat left after she gave birth to three children. 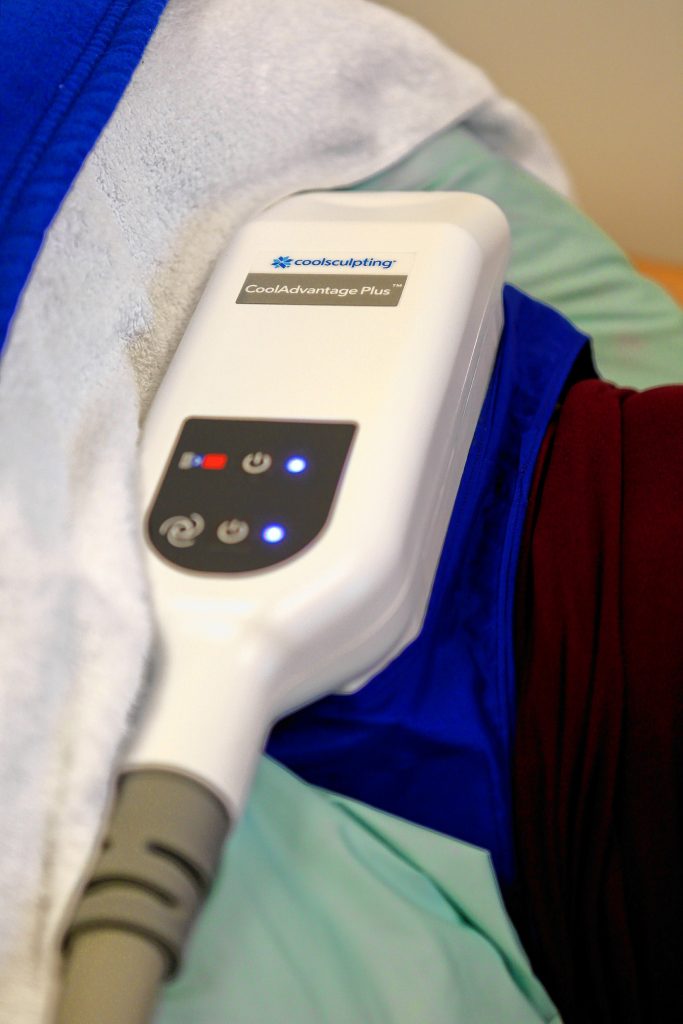 Shown above is the part of the device that is placed on the area being treated.

There is a way to actually to get rid of your fat while lying down.

It’s a method called CoolSculpting and it’s a machine connected to a hose with a plastic suction cup that hums as it vacuums up and freezes fat. Patients recline on a table as the cold kills the fat cells, without harming the surrounding tissue, says Dr. Katherine White in Northampton, who has had a dermatology practice in the area for over a decade.

It’s an instrument that promises to shrink jiggly tummies, flabby arms, and love handles and it arrived at her office, Hampshire Dermatology and Skin Health Center, nearly two years ago.

The device can treat only the “pinchable” fat under the skin, not visceral fat lining the organs that’s more commonly associated with health conditions like heart disease, White says. “Visceral fat tends to respond to diet and exercise, whereas subcutaneous deposits of fat are much more resistant.”

So far, White says, she has five to 10 patients coming every week for treatment.

It’s a cosmetic procedure, not covered by insurance, that typically costs between $2,000 and $4,000, according to the CoolSculpting website. The price varies depending on the number of areas treated and may require multiple 35- to 60-minute sessions over the course of several weeks, the website says. Because of that variance, White says she does not quote prices over the phone; patients see her for a consultation to get a cost estimate.

Advocates say it is safer and easier than liposuction, a surgical procedure that sucks out fat and requires a recovery period. “It offers a non-invasive, non-surgical approach to reduce stubborn fat deposits,” White said.

Some patients are looking to build confidence and get their bodies back in shape after menopause or pregnancy, White says. The machine can target back fat that can hang over the bra or shrink bulges around the upper thighs. Men most often request treatments on the fat on the sides of their waistlines. A common area for women to ask about is where the thigh meets the buttocks, also known as the “banana roll.”

The Food and Drug Administration cleared CoolSculpting for use in 2010, based on a study that showed changes in 60 patients after treatment on abdominal fat. Last week the FDA approved the process to shrink double chins, too.

These are areas that can be challenging to target with just diet and exercise, White says. “Many of my patients are at their target weight, are physically active and fit, but they are frustrated that they can’t get rid of certain areas,” she said.

The CoolSculpting machine looks like a cousin of the Star Wars droid R2-D2. It’s about 3-feet tall and on-wheels. There is a screen on the front that displays a timer, so patients can keep track of how much longer they have to go. A tube extends out from the machine that can be fitted with several different suction cups, tailored to different parts of the body.

Some patients will spend all day here, White says, laying under a blanket, flipping through magazines, as the machine works. Others will take their lunch breaks here to get a quick session in. Many are longtime patients who have seen White for other dermatological needs, like treating skin cancer or evaluating rashes.

One client, a Northampton lawyer in her 30s who asked that her name not be published, says she tried to get rid of her arm flab through weight training at the gym, but the fat was just too stubborn, and her busy life prevented her from spending as much time working on it as she would have liked.

“There were specific areas that I couldn’t seem to get,” she said.

She was at White’s office last week getting treatment on her arms. It was her second one — during the summer she had the process done on her upper thighs. The quick results were appealing to her. Patients generally see a change in a few weeks, but it can take up to three months to see the full results, White says.

“I really love the way my clothes fit now,” the lawyer said.

After finishing her treatment, she planned to go right back to work. There is no down time following the procedure. The only downside, she says, is a tingly feeling as the device vacuums up the fat. “It’s not super comfortable.”

Side effects said to be rare

According to White, some patients may notice a temporary change in sensation in the area treated, but there should be no negative long-term effects. A rare side effect, she says, is when the process triggers the body to start producing more fat cells. This has an incidence rate of only .0051 percent, she says, and if it happens, the CoolSculpting company will pay for liposuction.

When the fat cells are injured by cold, White explained, the body’s immune system triggers what’s called programmed cell death, which is typically caused by trauma or infection. The immune system then recognizes that the cells have been injured and the cells are disposed of through the lymphatic system, the body’s natural garbage disposal. “It happens gradually, though, with no taxing on the body,” White said.

Jill Carter, 37, another client, who also works as a medical assistant in White’s office, says she decided to target some stubborn fat on her stomach left after giving birth to three children.

“It’s starting to feel cold, like you have a big ice pack on you,” she said as the suction cup was lowered onto her belly during a treatment earlier this month. After about eight minutes, she says, the area goes numb.

This is the third treatment she’s had on her belly and, so far, the process has lived up to her expectations. “I went down a pant size after having my abdomen treated,” she said, adding that she also was able to slip into shirts that she thought she would never be able to wear again.

After treatments, she says she has no problem returning to her regular activities, like chasing her three children around at home.

“It’s pretty amazing,” she said. “It’s given me more confidence and really made a big difference.”

Lisa Spear can be reached at Lspear@gazettenet.com.