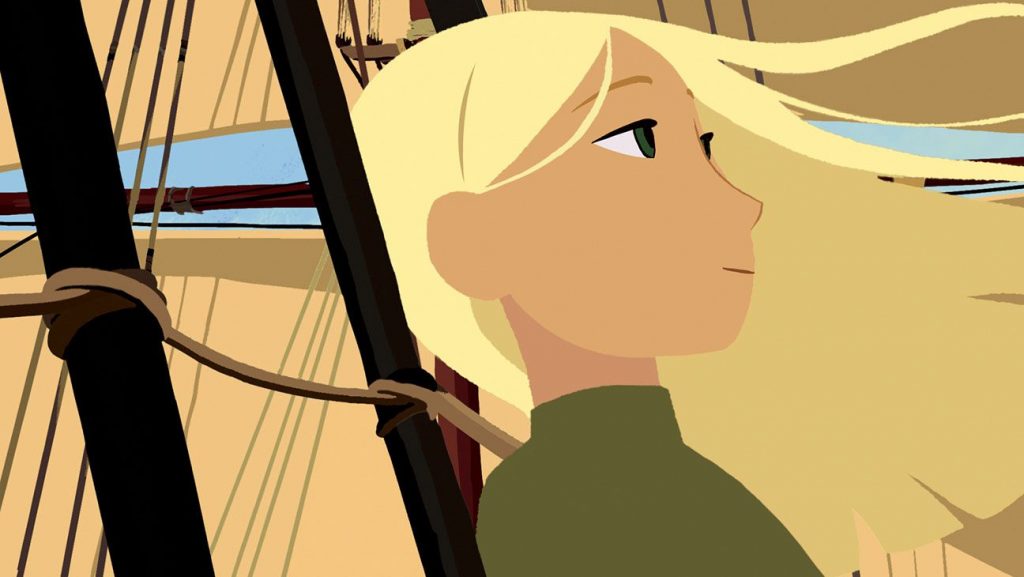 As the father of three little kids, I’ve come to regard the entertainment world — especially television and movie fare — as an ever-shifting battlefront. I’m not interested in shutting them off from the experience, but figuring out how to make it both enjoyable and edifying isn’t always so easy. “YouTube is junky,” my son will often tell me, just before asking if he can watch a particularly junky train video.

For my daughters, I’m always on the lookout for good role models — something that, thankfully, is getting easier all the time. (And yes, I do search them out for my son, too, but while male representation has its own issues in media, a lack of abundance has never been one of them.) This week, a French/Danish film comes ashore to offer young women everywhere another heroine to look up to.

Long Way North, directed by Rémi Chayé (assistant director on The Secret of Kells), is set in St. Petersburg during the late 19th century. There, the young aristocrat Sacha (voiced by Chloé Dunn) dreams of her absent grandfather Oloukine, a captain in the Russian Navy and a fearless explorer who has spent much of his life at sea. When he disappears after setting off on his dream expedition — a journey to the North Pole — Sacha, who has long felt the same longing for adventure that drives her beloved grandfather, decides to find out what happened.

For a teenaged girl in 19th century Russia, this is … not so easy. Sacha’s parents disapprove in no uncertain terms, and indeed her own father has designs to marry her off to a visiting prince (now there’s a talking point for modern day parents) for political gain. Still, Sacha is determined to make her own decisions, and she flees the family manse to embark on a wild quest to the north.

From there, she spends time on a rough-and-tumble ship and a rough-and-tumble tavern, where the female proprietor, used to dealing with sailors, sees a kindred spirit in Sacha. For a time, Sacha is determined but also entitled — she swipes a set of expensive earrings on her way out of the house, hoping to pay for passage to the Pole — which is, paradoxically, a breath of fresh air. Chayé, and writers Claire Paoletti and Patricia Valeix, gives us Sacha not as a perfect person, but as a growing young woman learning as she grows. For my money, as both a moviegoer and a father, that is a far more interesting — even edifying — story to tell.

Also this week: local Cinemark theaters bring in two special screenings of The Opera House, a new film about the birth of the Metropolitan Opera House by documentarian Susan Froemke. Though it features rarely seen footage and a soundtrack brimming with a long line of electrifying performances from the Met’s history, this is not just for opera buffs: the high drama of the Met’s history is on a par with any production mounted within its walls, and offers a tantalizing glimpse of how history is made — sometimes by force.

For the Met — at least the one depicted here — it feels like there are two great stars: the unstoppable soprano Leontyne Price, who both opened the Met and shines here in recent interviews (and, at 89, she still breaks into song); and the equally unstoppable urban planner Robert Moses, who appears in an archival interview. To build the Met, Moses didn’t think twice about the wholesale demolition of a New York neighborhood. But in a quintessentially New York moment, it’s the people of the city who get the final word when Froemke tracks down a few of those who were given the boot. They are at once resigned and indignant in a way that only New Yorkers can be — may they never change.