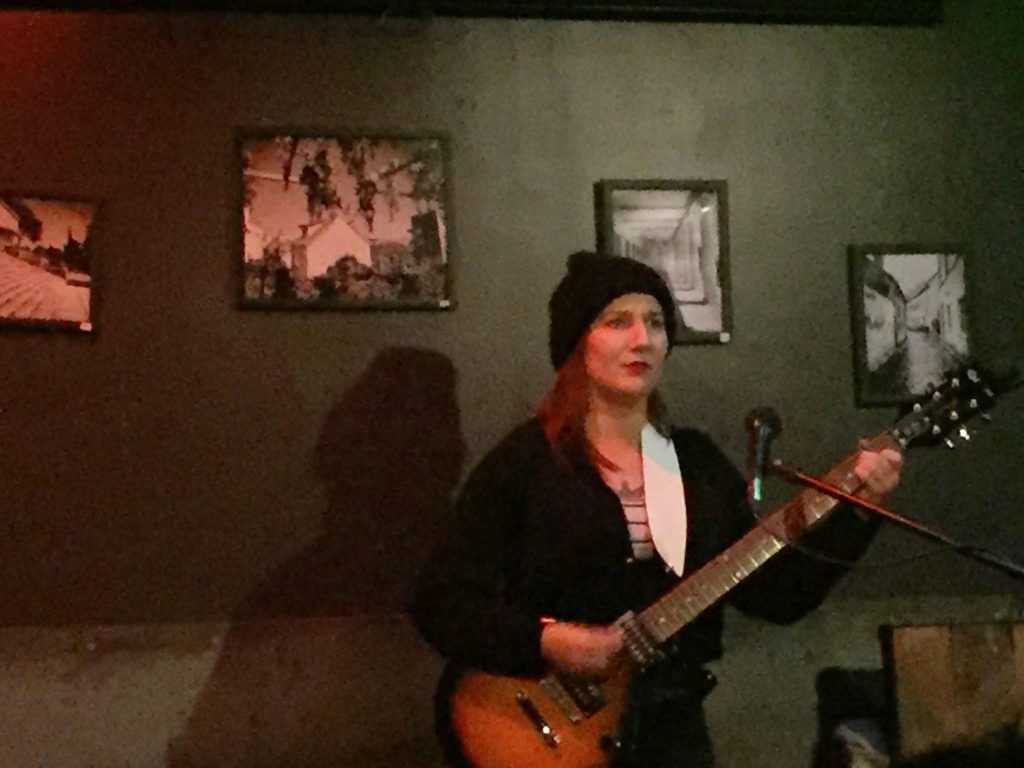 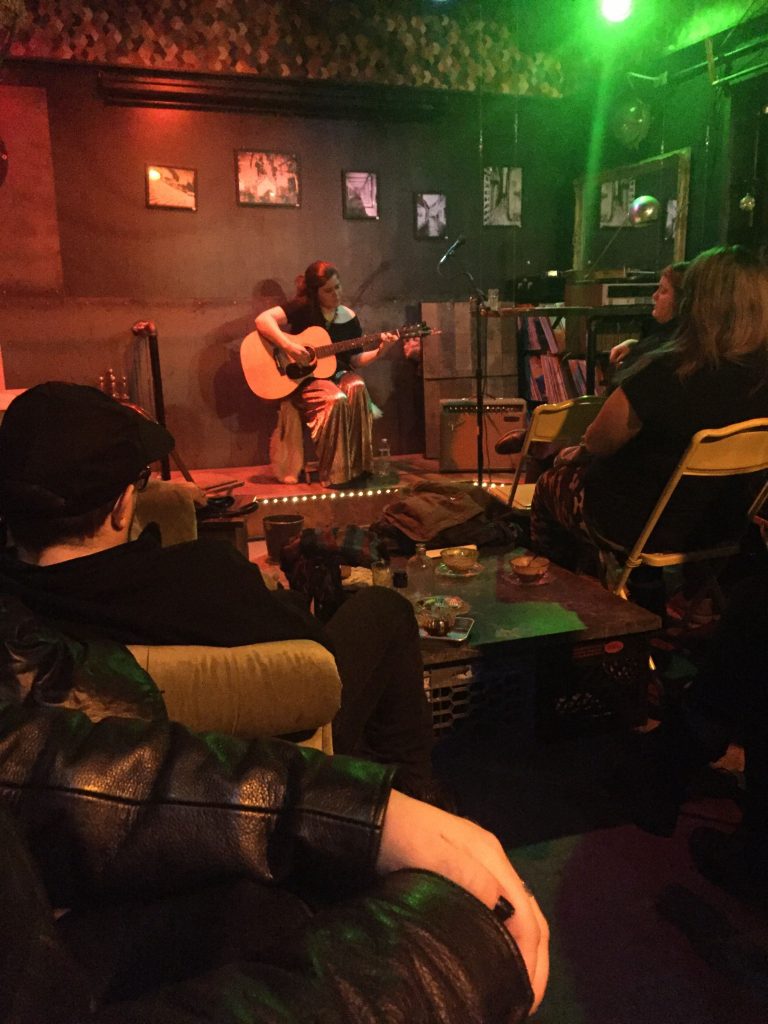 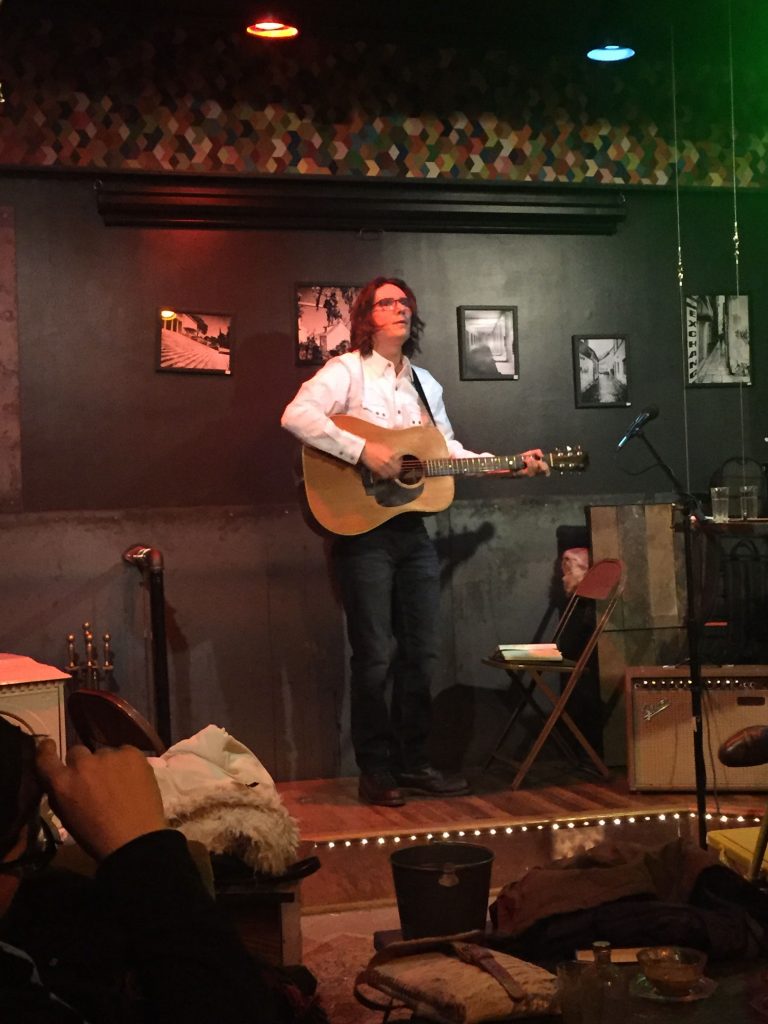 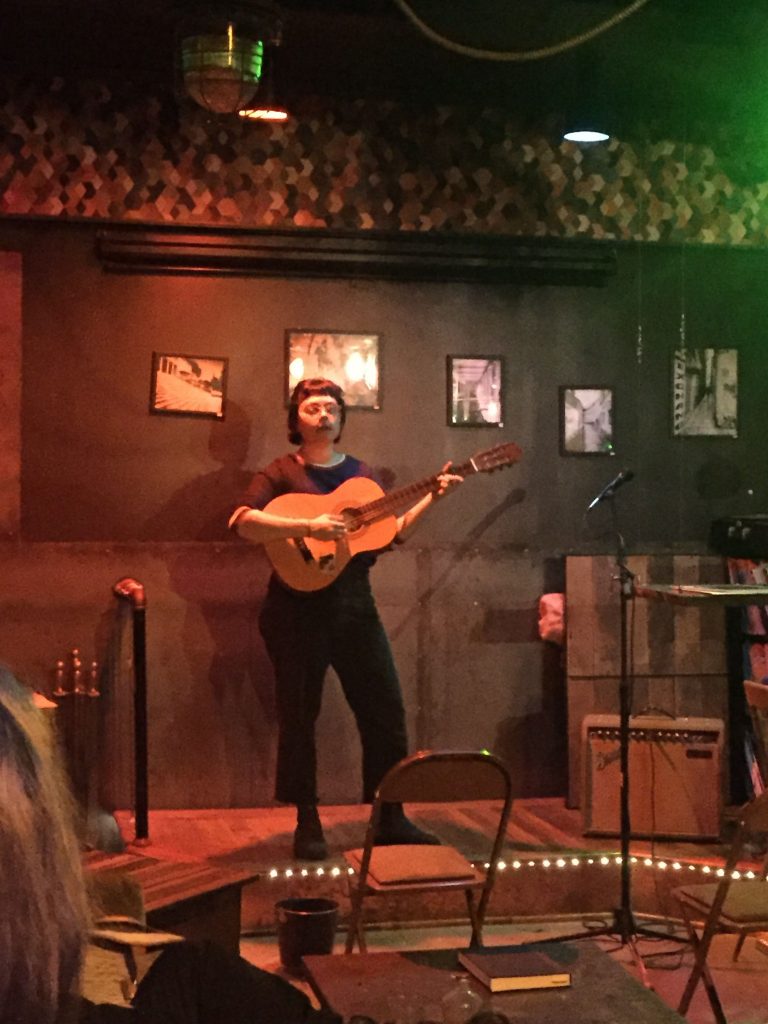 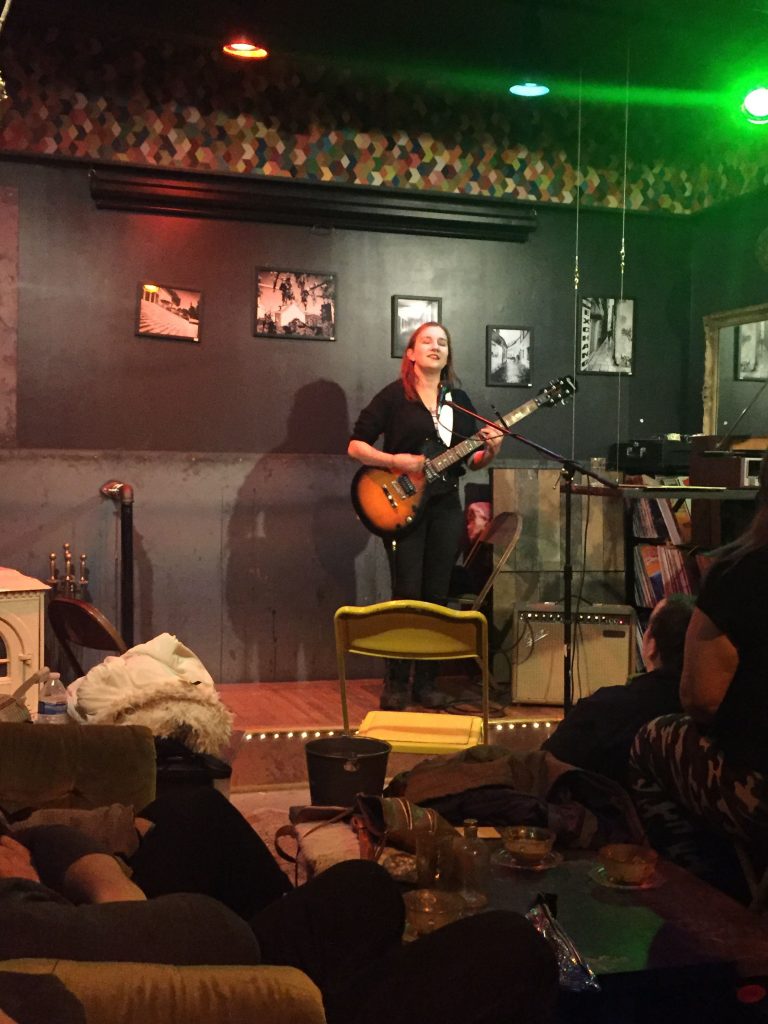 The smell of strong coffee warms me from the cold as I open the door to Iconica Social Club for the first time. From the outside, it looks like an odd brick building in the middle of a parking lot behind Haymarket in Northampton. But upon entering, you’re engulfed within an interior designer’s dream.

There were a handful of people crowded near the coffee bar, ordering some yummy-smelling concoctions that were served in science lab beakers with a teacup on a metal tray. The ambiance of the space was thrilling to see. I kept catching glimpses of oddities, like an old empty glass jar of hydrochloric acid, industrial-style lighting fixtures hanging from the ceiling, and Polaroid photos in the bathroom. They were a cool touch.

Bathrooms of the Valley #dresses #bathroom

I squeezed into the gallery area where Northampton-based Lady Jane was kicking off the night of singer/songwriters. Her voice was soft, but amplified. Her guitar sang along with her as she poetically grooved us along with each song.

The area was filled with mismatched furniture and chairs, giving it a bohemian living room vibe. After having a couple beers across the way at Packard’s, and still fresh from the Elf on the Shelf holiday chaos, my friend joked that we were the “drunks on the trunk” after we seated ourselves on an old luggage trunk. Looking around more at the space, my eyes were distracted while I continued to listen to the music. There was a fabulous glitter fanny pack on top of the coffee table with milk crates for legs. An artist with ballerina-style black slippers was sketching realistic representations of magazine cutouts in a notebook. There was also some french braiding action going on in front of the stage.

Lonely Whale, another solo indie act graced the stage in gold glitter pants. I wondered if she had caught a glimpse of that fanny pack! She was charismatically cool, yet deep with emotional songs that she portrayed in strong independent female fashion. I don’t think I have ever seen someone whistle the chorus of a song, and have such depth and range that it actually sounds good.

Greg Hall, also known now to me as John Denver reincarnated, came on and I was pleasantly surprised. When I read his name on the flyer for this show I realized he was the only one I hadn’t seen. His uplifting, country road-style Americana brought a different version to the classic by Patsy Cline, “Crazy.”

Towards the end of the show, I was still going sightseeing. The stage is cute and small, perfect for smaller acoustic acts. There’s a fire place in one corner, which kept us all warm, and on the other side of the stage sat a stash of vinyl on some shelves. I had to control myself not to interrupt acts while flipping through to see what treasures were there. Along with music acts, there were also black and white framed photographs by Jesse Merrick for their current art gallery on display.

The sounds of clinking glasses and coffee beans poured into a coffee grinder from the main room added a cool touch to the performances.

Celseigh came on for the last performance of the evening, and was the first of the night who plugged in with a solo electric guitar set. Her lyrics were dark, but her voice was uppity and energetic. With influences of Townes Van Zandt, Tom Waits, and heavy metal music, she perfectly combines her influences to produce a doom-infused Americana, unlike anything I’ve heard. She joked in between songs to lighten the mood, and wore a continuous smile. The performance, and the evening, ended with her lyric: “I’ll let you die when I’m free.”