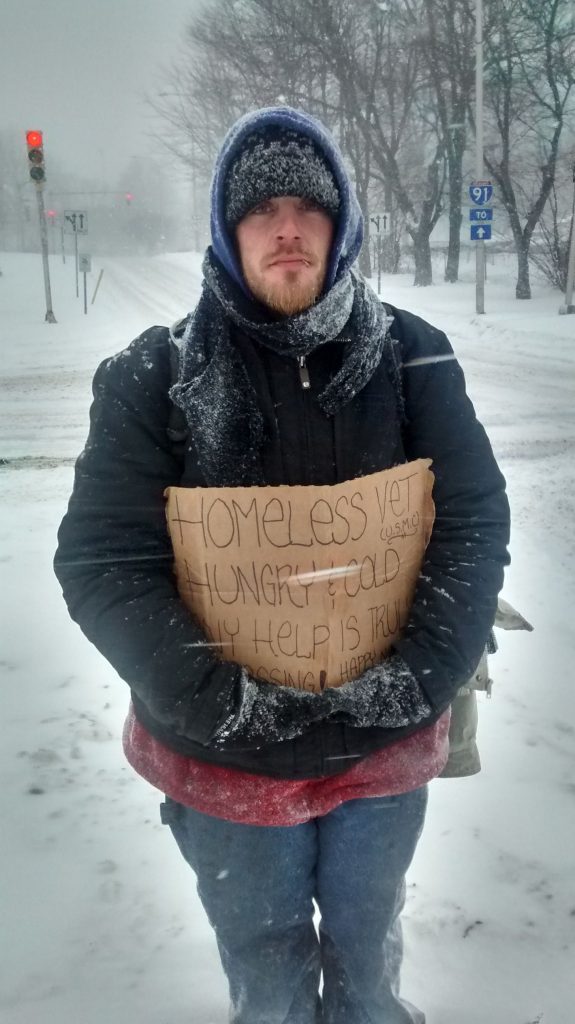 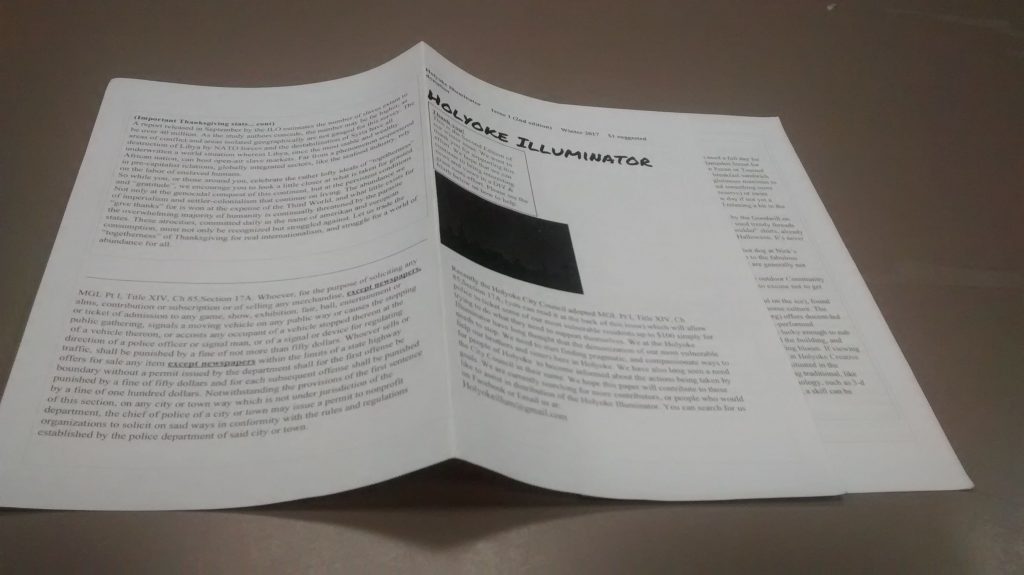 Matt LeBlanc stood near the Interstate 391 exit near High Street in Holyoke, holding a sign that read, “Homeless vet — hungry and cold” while heavy snowfall rained down in the frigid afternoon of Jan. 4. LeBlanc started panhandling at around 10:30 a.m. and by 1 p.m. had only made $1.

On Nov. 21,  Holyoke City Council voted unanimously, 12-0, to adopt a state ordinance that would fine panhandlers up to $50. According to Chapter 85, Section 17A of Massachusetts General Laws, each subsequent offense is punishable by a fine of $100. The ordinance was put into effect on Jan. 1.

“The city ordinance — they’re talking about putting up barriers. How crazy is that when there’s people out here that are hungry. They could turn the empty buildings into shelters. There could be a lot more help for us. We don’t like standing out here,” LeBlanc, an eight-year combat veteran of the Iraq War who’s been homeless for the past three years, said.

But there is a loophole to the state law that exempts newspaper sellers, which a DIY newspaper called The Holyoke Illuminator is utilizing by giving away copies of the underground newspapers for panhandlers to sell for $1.

Gabriel Quaglia, editor of the Holyoke Illuminator who was also formerly homeless, said he views the ordinance as a violation of First Amendment rights and a waste of time for the city.

“It’s not an easy issue to look at,” he said. “First and foremost we need a shelter and a drop-in shelter in Holyoke. We don’t have one … We can’t even broach the subject of having a shelter here in Holyoke. It’s not even on the table.”

He said if panhandlers receive fines and don’t have the ability to pay them – there’s an option for them to spend time in jail instead.

“It’s the craziest thing in the world to me,” he said. “It’s debtor’s prison.”

Mayor Alex Morse vetoed the ordinance, but the council was able to overturn his executive action. In a Dec. 6 letter to the City Council he stated the city could become liable for a lawsuit based on a violation of First Amendment rights.

“The U.S. Second Circuit court ruled in Vives v. City of New York that while a municipality cannot be liable for enforcing state law that affirmatively obligates the municipality to act, it can be held liable for its discretionary enforcement of state law so long as it has adopted a conscious policy of enforcing the specific law in question,” Morse stated in the letter.

He said another case, Benefit v. City of Cambridge, also set a precedent for panhandling being protected by the First Amendment.

“I understand the Council’s desire to take action on the issue of panhandling; however any action taken should not open the city up to liability,” Morse stated. “Other cities in the commonwealth who enforced laws such as this have ended up paying out hundreds of thousands of dollars in settlement costs and legal fees.”

Roy Casey, chief of staff for Mayor Morse who spoke on the mayor’s behalf, said the ordinance is an obscure state law that was created in the 1930s.

“We can’t find any instances of it actually being used or enforced in modern times,” he said.

Casey said Chief of Police James Neiswanger has stated publicly that won’t enforce the ordinance because it violates freedom of speech.

Neiswanger did not respond to multiple requests for comment.

City Councilor Nelson Roman, who voted in favor of the ordinance and who was formerly homeless, said he knows a lot of panhandlers in his ward and believes panhandling has become a problem in the city during the past few years.

Roman said he believes there needs to be more investments in the city to help people who are homeless by creating work programs for panhandlers and improving support programs in the city such as Providence Ministry for the Needy or Tapestry Health.

The council is also considering creating an ordinance that would fine drivers who give money to panhandlers, which Roman is against.

“I think we adopted a state law that exists to try to curb [panhandling],” he said. “Let’s try this. I don’t want to us getting into having a police officer on every corner and ticketing.”

Casey said he believes the proposed ordinance brought forward by former City Council Kevin Jourdain would not violate civil rights because it would fine drivers who stop at a green light to give money to panhandlers.

Standing in the snow on High Street, LeBlanc said he thinks the council’s proposed ordinance is cruel.

“It’s hard enough with us out here trying to make money and now they’re going to do this? That’s pretty much telling the people, ‘Hey, if you give them money, we’re going to punish you. It’s hard enough out here getting help. Sometimes I stand out here all day to make $20,” LeBlanc said.