Monte Belmonte Wines: You Make Me Feel Like a Natural Wine 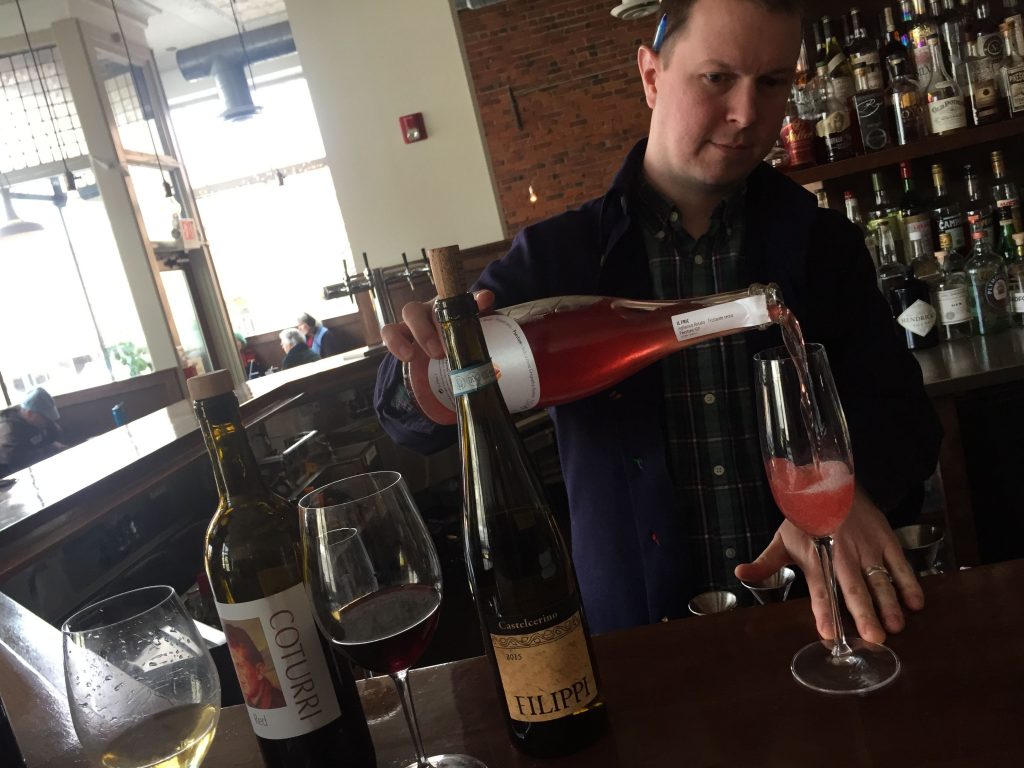 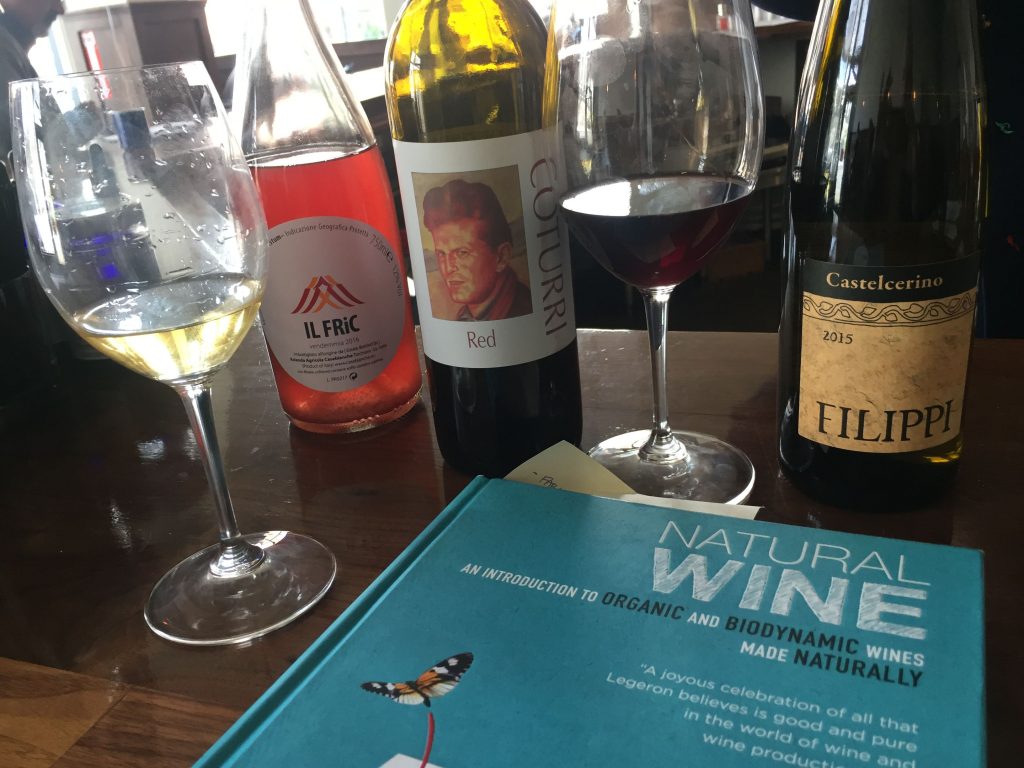 A selection of natural wines just ripe for a taste test

All natural. The kind of buzz words that make my extremely savvy, health-conscious wife cringe. When you see “natural flavors” on raspberry flavored items, it might as well read “flavors expressed from a beaver anus.” It’s true. Or at least it used to be. Google it. “Natural” is often just corporate-speak used for greenwashing. But in the world of wine, “natural” may actually be a word you want to seek out. 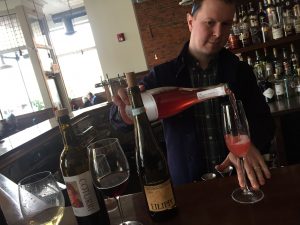 Wine snobs often eschew the organic section of a wine store. Mostly because a) the focus should be on making a great wine first, and b) most of the great wines are made organically already, whether they go to the trouble of being certified or not. But “natural” is now a buzz word amongst the hoity-toity, sommelier/hipster, wine-aficionado community. And one place for natural wines in the Valley is the newly expanded Amherst Coffee. Wait. A coffee shop? Yes. With their giant new bar, a full cocktail menu, Aretha Franklin’s voice filling the atmosphere, and a wine list with a focus on natural wines. So what are natural wines?

“When people ask, and they often do, it kind of starts with organic and biodynamic farming as a given. Both of those things have a certification. Natural wine doesn’t really have an official stamp for it. But it’s got nothing added to it. Specifically sulfites.” That’s Lincoln Allen — the bartender, bar manager and, along with owner Mukunda Feldman, the person responsible for creating the natural-wine-focused list at Amherst Coffee. Sulfites often get a bad rep. Sulfur is a naturally occurring element and shows up in pretty much every wine. Even the natural wines have to put “contains sulfites” on the label, probably because it’s the devil’s favorite beverage. “Oh, what a smell of sulfur!” as Glinda The Good Witch might say. But some producers use it as a natural preservative, antioxidant, or antibacterial agent. Lincoln says, “If you add sulfites, it halts the natural process. It sort of freezes it. Fans of natural wines like to see the continuing development of the wine. It’s a little more difficult to make natural wine because you’re not pushing the pause button. You’re letting it go. It’s kind of a risk. And that’s why we like it.”

Natural winemakers are using only indigenous yeasts naturally found on the grapes in their cellar or their bucket or wherever they make it. They let the naturally occurring yeast do it’s dirty work of turning sugar from the meticulously farmed grapes into alcohol and only gently steer the process, letting the grape naturally transform into its better self. It’s basically how ancient people made wine thousands of years ago. They didn’t use additives like Mega Purple or yeast packets. They let the grapes be wine.

When you stick your nose in a glass of natural wine, you may be in for a treat. Or a shock, depending on your tastes. I love that funky, visceral, human-being smell that wine snobs call “earthy” or “forest floor” but is actually just a euphemism for human B.O. or human B.M. It sounds gross, but so many great wines have these qualities. How about the delightful scent of a just-opened-new-shower-curtain? Or some the smell of petrochemicals? These are also not a turnoff for me and are just some of the things you can experience in a natural wine. Lincoln adds, “It might not be something for everybody. But it’s one thing that stands out for people. It’s really alive and fresh. You might try a Pinot Noir that doesn’t taste like a Pinot Noir you’ve ever had before. It’ll surprise you.”

Their wine list is small and changes often, relying on small distributors — mostly out of the Boston area. It makes it hard to find the bottles from their list in stores. But the benefit of serving the wines at a bar is you get a real- time reaction. How do people at Amherst Coffee respond to these funky natural wines? Lincoln says, “People in this area tend to go for the different — especially when it comes to organic and biodynamic. There’s a general openness and they seem to like it.”

I tried three of the wines on their list. First, the Soave from Filippi, Castelcerino in the Veneto in Italy. Soaves are made with a grape called gargenaga. It was this wine that peaked my interest in 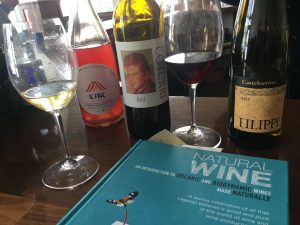 A selection of natural wines ripe for a taste test

Amherst Coffee’s natural wine list back in the late summer. Now, I crave this wine and stop by and get it almost every time I’m in Amherst. It’s got the light citrus notes of an Italian white. Not quite grapefruit — maybe a grapefruit rind. But it is so much funkier than most whites. There are not a lot of funky whites. Maybe Bowie? Or Beck?

Next, I tried the Cotturi Red Founder’s Blend from Sonoma. The red is named for the founder pictured on the label whose name also happens to be “Red.” Harry “Red” Cotturi. His picture on the label looks like van Gogh tried to paint another type of red. Some sort of communist leader. According to Lincoln, Comrade Cotturi was an early adopter of the natural wine process in Sonoma — bucking the trend in California and going for the no sulfite, no filtering method very early. The wine was SUPER funky at first, with that shower- curtain scent. It blows off after a bit, and the fruit of the Cab, Syrah and Zin start to pop, but definitely with a wildness to it. It’s a great cold- weather wine. And at 14.2 percent alcohol by volume, you will feel very warm. The Cotturi is one of Amherst Coffee’s most popular wines. So much so, they are working with the winery to develop a house blend specifically for them.

The last natural wine I tried was the Il Fric sparkling Aglianico from Casebianche in Campania, Italy. Aglianico is a weird enough grape as it is but I’ve never had a sparkling Aglianico. This wine is bright pink— almost fuschia. It looks like your clothes from the ‘80s or your kids’ clothes from now. It’s not as bubbly as a Champagne, definitely more subdued or “frizzante,” as they say in Italia. And if you tip the wine bottle upside down, you’ll see the yeast is still on the bottom. Swirl it around, and it makes the wine cloudy. But that is the secret. That is where the magic funk comes from.

Apart from being an amazing bartender, Lincoln is also a jazz guitarist. And there are parallels for him between the worlds of jazz and natural wine, he says: “Show me something I haven’t seen before. That’s what keeps it interesting for me. I knew what types of flavors I was drawn to in wine: funky, interesting, surprising. I’ve sort of always been seeking out these style of wines, and I realized that the wines I liked had these flavors because of this natural process.”

Natural wines may not be “certified,” but they’re true to the integrity of the process, and they are certainly an adventure in your mouth. And like the Aretha Franklin playing as ambience at Amherst Coffee, you may be feeling like a natural woman. So go try one of their natural wines.