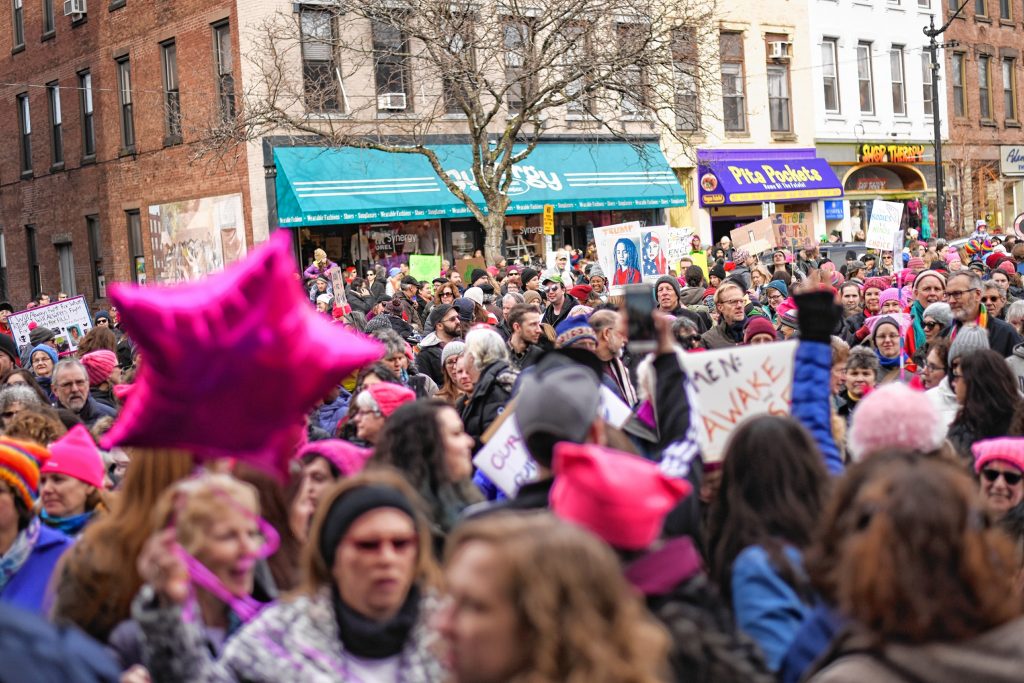 It is beyond fitting that on the first anniversary of Donald Trump being inaugurated president not only does the government shut down, but huge numbers of people take to the streets to protest against his policies.

Women’s marches took place across the country, including thousands of people gathering in Northampton. With my one-year-old son (who just barely made it to be born before Trump took office) strapped to me, I headed out to join the throng.

Stepping outside my door and walking toward Sheldon Field where the march was to begin, almost immediately I saw people in pink hats and holding signs headed the same way. As we got closer, their numbers grew. And by the time we got to Bridge Street the sidewalks were choked with people.

One of the overarching themes of the march was “power to the polls,” which is as important a message as any. As energized voters have been showing up more and more, candidates who have run on platforms to resist Trump have been winning elections – in Virginia, New Jersey, and, most improbably, in Alabama.

Unlike during non-presidential election years like 2010 and 2014, activists now understand the importance of getting out to vote. As if to underline the message, we wound up behind someone holding a sign that said “Vote as if your life depends on it.”

As we got to the field, I started taking note of all the signs we saw, many exalting women’s rights. Seeing them surrounding us was inspiring:

“They try to bury us, but they don’t know we are seeds”

“The future is female”

“Equality for all; the force awakens”

“A woman’s place is in the resistance”

“Take a look around you and exult. We are the ones we’ve been waiting for.”

“I can’t believe we still have to protest this shit”

“Men of quality do not fear equality”

“ ‘If you don’t have a seat at the table, you’re probably on the menu’ — Elizabeth Warren” 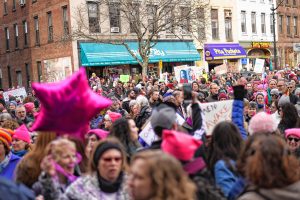 At City Hall, the small sound system that was set up was inadequate to address the thousands of people who had gathered, but the snippets of the speeches I heard called on those assembled to vote, to get involved with candidates they support, and to remain energized through Election Day.

All around us, the crowd cheered.

Meanwhile in Washington, fallout from Trump’s decision to wind down the Deferred Action for Childhood Arrivals program and congressional Republican’s refusal to bring the matter to a vote led to a budget impasse. The government shutdown could not be a clearer sign of dysfunction.

What will happen next? There is a special election in Pennsylvania’s 18th Congressional District on March 13. Then there’s another one in Arizona’s 8th Congressional District on April 24. Both of these should be Republican strongholds, but Democrat and Marine Corps veteran Conor Lamb is running a strong campaign in Pennsylvania, and there are several Democrats running in Arizona, as well (the primary is February 27).

Democratic wins, or even close races, in either of those contests would establish further evidence of a growing Blue Wave in November.

One thing is certain: thousands of people are standing up to have their voices heard.