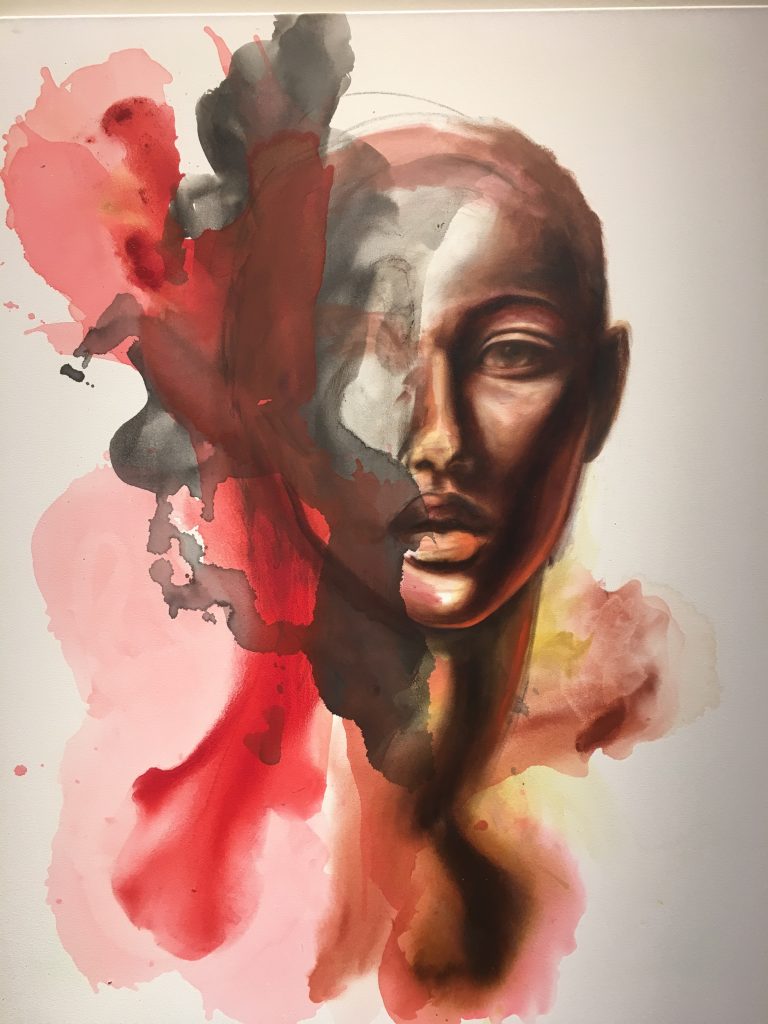 Walking into the genteel Von Auersperg Gallery, one is reminded that Western Massachusetts is truly a bastion for visual arts venues. One is also reminded of how many choose to host phlegmatic collections of New England landscapes rather than those that may court controversy. But the Von Auersperg, a teaching gallery, housed on the tony Deerfield Academy campus, has chosen to take a chance. Gallery Director Lydia Hemphill is hosting artist Imo Nse Imeh’s show Forgotten Girls: Black Heroines on the Edge of Darkness and Hope. The exhibit is a haunting collection of images that, once placed in our historical and current socio-political realities, become all the more perspicacious and relevant. 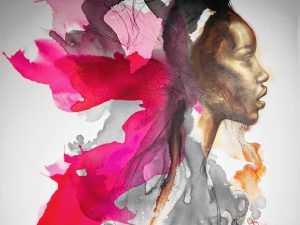 The Forgotten Girls exhibition is actually two shows in one. The first, “Ten Little Nigger Girls,” is a complex and heartbreaking series of paintings that embody the pain and anguish black girls bear when they are marginalized and victimized by a society that neither wants nor values them. Imeh says this collection was inspired by the 1907 Nora Case children’s story, Ten Little Nigger Girls, in which ten girls are eliminated one by one — sometimes quite gruesomely. He says the disregard for black life demonstrated in Case’s book still persists today, evinced by the rise of the Black Lives Matter Movement. Titles like “Puppet Girl,” “Syringe Girl,” and “Girl on Fire,” force viewers to contemplate the horrors of inflicted violence, abuse, drug use, and suicide. Moreover, we become acutely aware of the black female conundrum: being at once the victim and the villain because by all accounts they are viewed as subhuman. Perhaps more importantly, the images force us to humanize these children, to remind us that they feel pain, have hopes and dreams and even faces.

It’s not just the paintings that make for such a stunning show; it’s the language Imeh uses to describe them. Dr. Imo Nse Imeh is a Nigerian-American scholar of African Diaspora visual culture and aesthetics and an adjunct art and art history professor at Westfield State University. He is the author of Daughters of Seclusion: the Revelation of the Ibibio ‘Fattened Bride’ as the Icon of Beauty and Power. His scholarly appreciation and dedication grant him a rare and profoundly sympathetic take on the black female figure in mind and body. His descriptors challenge the viewer to delve deeper into the image and step into the psyche of not just the subject, but of the artist himself. 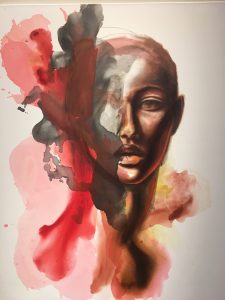 One in a series “Color Studies: Three Girls” from the Chibok Girls collection by Imo Nse Imeh

In, “Chibok Girls,” Imeh captures the very essence of what is lost but also what endures. Chibok is the town in Nigeria from which 276 young school girls were kidnapped by the Boko Haram terrorist organization in April 2014. This atrocity sparked the #Bringbackourgirls campaign and shed light on the horrors of child trafficking and militant indoctrination. Imeh’s portraits are designed to bring faces to these girls — eventually all 276.

Imeh uses color in four of the Chibok portraits lending them a degree of naturalism, which is in dynamic contrast to the stark and limited palette of the Ten Girls collection. What is also striking about these Chibok studies is the absence of the subjects’ eyes. Whether milky or non-existent, the eyes of the Chibok girls are distant and lost — like the girls themselves. There is a real sense of what has been taken away — vision, spirit, the ability to find the path forward. It is in superb contrast to the colors that awash their faces. But even the color feels ephemeral and fleeting, like a spark that will die without warning, leaving a sightless soul lost on a vast white canvas.

But Imeh pulls us back from the precipice of sorrow and loss through his “Dryad Studies,” a triptych of sketches in the Chibok collection. These girls, though stolen, remain grounded and rooted in the earth. As nymphs inhabiting trees, these girls embody the staying power of memory and the vanquishment of despair. Taken altogether, Chibok Girls is a breathtakingly empathetic excursion into the sorrows and triumphs of these stolen Nigerian girls and all black girls throughout the African Diaspora.