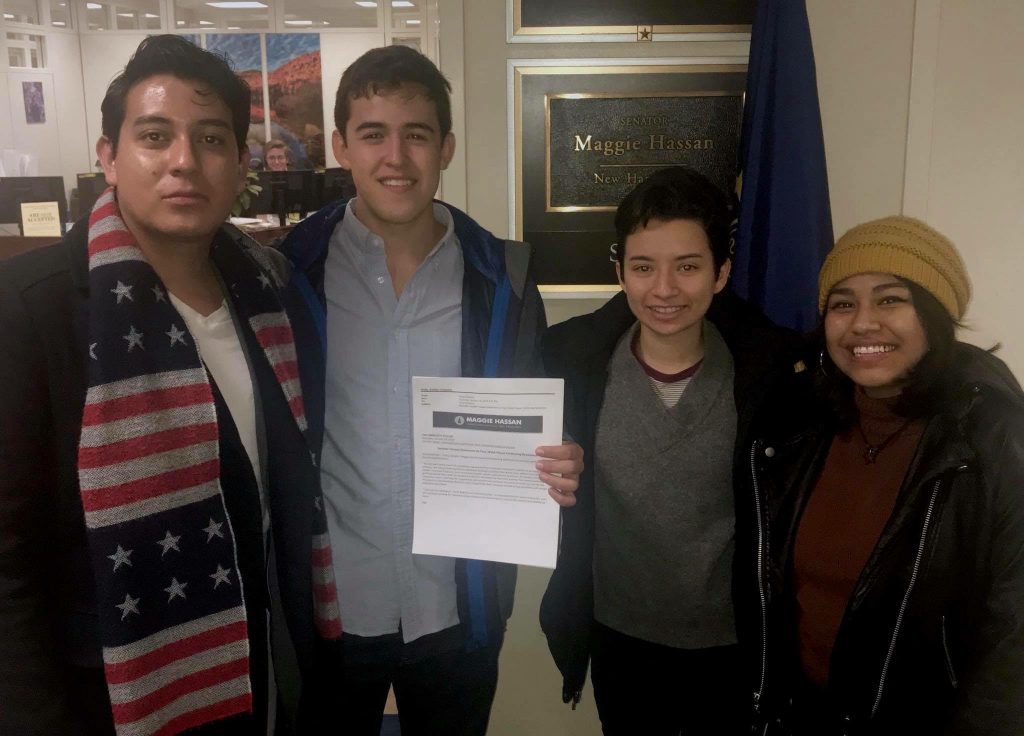 Eduardo Samaniego, a 25-year-old Hampshire College student and undocumented immigrant from Mexico, was one of hundreds of thousands of people to travel to Washington D.C. this past week to advocate for the Development, Relief, and Education for Alien Minors (DREAM) Act.

Samaniego said he hopes Democrats would “continue to stay strong and represent the best values and best traditions of this country” by supporting the DREAM Act, which would grant more than 800,000 people protected by the Deferred Action for Childhood Arrivals (DACA) program a pathway to citizenship.

“I think that the immigrant rights movement fight is not a fight that’s just about today and right now,” he said. “But it is a continuous fight to make sure that every immigrant is afforded the same dignity and peace to live their life in the country they consider home. I think that Massachusetts and every other state can continue to do more.”

Senate Minority Leader Chuck Schumer (D-NY) announced on Jan. 22 he would secure enough Democratic votes, which would allow the government to reopen, in exchange for Senate Majority Leader Mitch McConnell (R-KY)’s assurance that a vote would be brought forward during the first week of February to grant legal status to individuals protected by DACA.

“The futures and families of Dreamers will not be assured by a promise from Republican leadership,” Markey tweeted. “We need a long-term budget proposal that includes real protections for our Dreamers, not a short-term IOU.”

Warren stated that it’s been more than 100 days since protection for Dreamers ended.

“We Dreamers, we’ve been waiting for 17 years since the first DREAM Act was introduced,” he said. “This is nothing new to us. We’ve been here before every single year. We cannot wait any longer. We deserve the opportunity to live our lives with peace and dignity just like any other people in this country.”

Samaniego, who doesn’t qualify for DACA, said he would be included under the current language of the DREAM Act bill.

“I came here when I was 16,” he said. “In order to qualify for DACA, you have to have come into the country before you were 16. I missed it by a few months because I was already 16 when I came to the country.”

He said despite it was powerful to see thousands of people protest in Washington D.C., most of which were small grassroots groups of five to six people. Samaniego visited the offices of New Hampshire Senators Maggie Hassan and Jeanne Shaheen (D) to advocate for the DREAM Act.

“I have seen at least 10,000 people over the past two weeks,” Samaniego said. “Just yesterday at a vigil, there were at least 1,000 people in front of the capital … It’s really inspiring to see that.”

Alejandro Nino, a 21-year-old student at Amherst College, said he’s uncertain of his own future due to the uncertainty about DACA.

“It’s an emotional toll; it’s a psychological toll,” he said. “It’s another month of uncertainty for all these people. I’m a senior at Amherst College. I have several job offers lined up for next year and, ‘Yes’, my status doesn’t expire until later of this year … But the reality is without a DREAM Act, I can’t imagine a future within this country beyond the next six months. What that means is I can’t plan for my future.”

Samaniego said he thinks one of the most important pieces of legislation in Massachusetts to protect undocumented immigrants is the Safe Communities Act, a bill that is currently in the state’s House of Representatives.

“It is a bill to make sure that state agencies do not cooperate with immigration [enforcement officers] and that they do not detain immigrants,” he said.

State Rep. Bud Williams (D-Springfield) said he would vote in support of the Safe Communities Act.

“I think that we need to have the safeguards in place to protect folks who have issues with the immigration community because the folks are really fearful now … some of the Dreamers, they’re very concerned. I want to be sure that there’s something on the book that they can be guided by.”

He said the state of Massachusetts could also allow Dreamers and undocumented immigrants to hold driver’s licenses.