I love it when music collides with a charitable fundraiser event, especially when that event involves human rights. The happenings at The O’s Music Bar in Sunderland last week were just that.

Rise Up Productions, a liberal activist group of musicians and actors based here in the Valley, put on music shows and theater events for various local charities. Each event, so far, has been focused on a different beneficiary for each show. 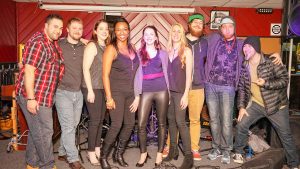 “We try to choose human rights organizations who need support in that moment,” said Kyle Boatwright, executive director of Rise Up Productions.
On this night, they were hosting a fundraiser event for Jane Doe Inc: the MA Coalition Against Sexual Assault and Domestic Violence. Timely, indeed, since all that is on the news lately is sexual assault-related.

“As female theater artists, the respective #metoo and #timesup movements ring very true for us, and as the sexual assault conversation continues to expand, backing organizations like Jane Doe Inc. grows even more crucial,” Kyle told me later through email. “It’s important to us that women receive the support they need and deserve, and we’d like to be as much a part of the movement as we can.”

And keep your hands to yourself.

I had never been to the O’s before, but the event intrigued me and I heard that members of Flavaevolution and Eavesdrop (both bands are Advocate Sessions alumni) were in Low & Close that were scheduled to play. I was welcomed to friendly, smiling faces, the band had already started grooving and the atmosphere was powerfully strong of activism.

I ventured over to the bar, ordered a Sam Adams Coldsnap and got comfy on a barstool at the corner of the bar. The soundtrack for the evening was classic ‘90s R&B hits smothered in soulful funk. If you didn’t know the lyrics to Paula Abdul’s “Straight Up,” then you wouldn’t have recognized it. Each song they covered they made their own adding their style, which I admired. I was also impressed with viewing a full band on stage with multiple musicians the bass was the only stringed instrument. No guitar. At times the keys took over the guitar solos and I was like “woah.”

In between every few songs, Rise Up directors Kyle and Nichole Wadleigh reminded us why we were there that night. Personal stories were told of sexual assault and abuse. All of us in the audience sympathized and some shouted out agreements. Kyle and Nichole also combined their voices with Kara Wolf and Laura Picchi of Low & Close for a handful of songs.

During a short break, Nichole was walking around with raffle tickets for a 50/50. I bought an arms length for $5, I had told my date that if we won, we’d put the money back in for the cause. So later when the winner of the night did just that, I felt we were all in good company.

Looking around, people were chatting and laughing, and although the benefit was a heavy situation, the aura was positive. I bumped into another Advocate Sessions alumni, Seth Newton, and we complemented each other on our enamel pinned bomber jackets.

After a short break, Low & Close were back on stage and with the first drum beat I knew what was coming … 1995’s anthem, TLC’s “Waterfalls.” I was such a TLC freak when I was a kid so I was pleased when Kara busted out the Left Eye rap perfectly. That made my night even better.

For a smaller scale bar, the sound was impeccable. Kudos to the sound guy, Chris Phoenix, for that. You felt every bass stroke and heard every note.
One thing that Kyle had repeated throughout the night while at the mic stood out the most from the whole event. It’s sad that it has to be repeated, yes, but it needs to be. So I’ll end it on her note, “Keep it respectful; keep it consensual.”

The fundraiser is still going on through January 31, so if you’d like to contribute, you can do so by contacting Kyle at riseupproductionsMA@gmail.com.