#MeToo? Black Women on the Periphery of a Movement 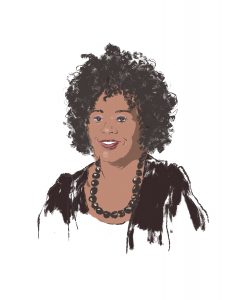 As a black woman, I cannot bring myself to seek refuge in the monumental arms of the #MeToo Movement. On the contrary, I often find myself feeling contempt and cynicism. But it’s not because I don’t empathize with the women who have come forward with their experiences of sexual victimization. Rather, in part, it is because the ubiquitous social media campaign was hijacked from a black activist named Tarana Burke who created the original Me Too 10 years ago for women of color. It was a campaign designed to allow us to share amongst one another our stories about the harassment and violence perpetrated against us in a society that often turns its back on our sufferings. So when I look at the Me Too version 2.0, I can’t help but think, “this is just too white for me.”
Like the feminist movement in the 1960s and its subsequent iterations, black women are noticeably absent in #Metoo’s leadership and general membership. And in case you were wondering, we and other women of color have been, and continue to be, sexually harassed and exploited as regularly as white women. But rather than standing shoulder to shoulder, black women stand circumspectly on the perimeters of yet another feminist movement, knowing a hard, cold truth: that our rows are harder to hoe because the intersection between race and gender complicates the issue of a unified feminine identity. Like the feminist movement, there is no place for black women to be who we are as a whole because their #Metoo has no place for discussions of how race and gender intersect. In other words, there’s no place for me in #Metoo.
Historically, black women have had to create parallel campaigns, like Black Feminist Theory, to express our unique experiences. But the truth is, no matter how numerous the voices of women of color, they do not have enough power to stir mass sympathy. The only way Tarana Burke’s Me Too will gain traction is if #Metoo takes up our cause as part of their own.
Oddly, however, it has always seemed to me that white women tend to use black women as the door to achieve their own personal revelations about female empowerment. I could not pinpoint the reasons I felt that way until the morning after the Golden Globes, for on that morning, folks across America began chanting “Oprah for president.” I immediately felt a wave of disdain because I knew that Oprah and all the white women in the audience had created a Hollywood #Metoo movie moment: A moment when the wise black woman stretches out her hand and, in some stereotypical fashion, shares the wisdom that would bring about a “profound” and feel-good denouement. She soothes her white charges and makes everything all right because she, too, has suffered but look at how strong and wise she is because of it, in spite of it.
Oprah’s acceptance speech during the Golden Globes was filled with dark historical moments involving a ravished and raped black woman and morphed into bright promises for the future with no mention of race. She assured her audience a “new day” is dawning in the wake of the #Metoo movement and the brave women in that room were spearheading a crusade destined for success. And, thus, we watched a black woman predicting the end of sexual misconduct to, by and large, a gathering of white women. The self-congratulatory black-clad matrons and ingenues of Hollywood stood emboldened by a woman whose life experiences have been NOTHING like theirs. At worst, it smacks of a mammy complex — the racist notion about black women’s superior caretaking abilities; at best it’s an infuriating blind spot that prevents these women from asking the questions “where are all the black women” or “why is our movement overwhelmingly white?”
The reason why black women do not participate is because our pain has never been taken seriously — by white women or anyone else. From the slave quarters to the violent and questionable arrest and mysterious death of motorist Sandra Bland in a Texas prison, our pain at the hands of violent and unscrupulous men has been either ignored or viewed with nonchalance because, let’s face it, the general consensus is, we can take it. Black women are, historically, reservoirs for abuse. So white Hollywood’s day in the sun does not cast a long shadow, rather it is a bright shiny spotlight on people who love being in the spotlight. There is no refuge for me in their movement.
Oprah ended her speech as if her clarion call would stir everyone’s (including the abusers’) better angels. “So I want all the girls watching here, now, to know that a new day is on the horizon! And when that new day finally dawns, it will be because of a lot of magnificent women, many of whom are right here in this room tonight fighting hard to make sure that they become the leaders who take us to the time when nobody ever has to say ‘Me too’ again.”
My question to Oprah: “Even the black girls?”
Gina Beavers can be reached at gbeavers@valleyadvocate.com.