Down To Earth: Artistically collaborating with unicellular slime molds 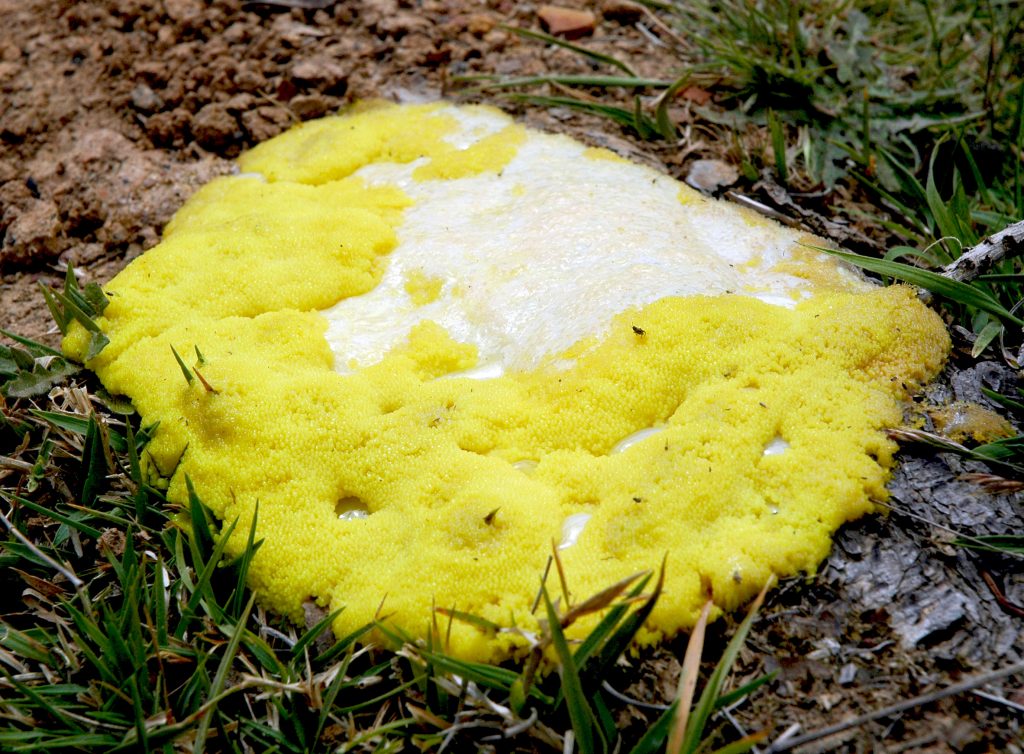 The other day, wandering the back alleys of social media, I discovered a Facebook group to fall instantly in love with: “Slime Mold Identification & Appreciation.” Joining the group, I was amazed to discover that it boasted 5,422 members (today, it’s cracked 6,000).

Go figure, I thought to myself – you can find anything on the internet. I composed a post to my Facebook friends. “Who on earth joins a Facebook page called Slime Mold Identification and Appreciation?” I wrote. “Er. Besides me, I mean.”

Little did I know that I would soon find myself falling, like Alice, down a rabbit hole of slime mold biology as an entry point to a radical artistic rethinking of human society and relationships. 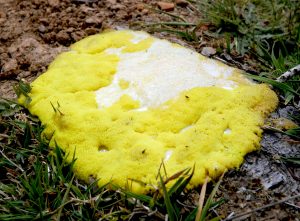 My comments quickly filled with people who appreciate these odd organisms. Among them was Amy Dryansky, the current poet laureate of Northampton. “Um, me,” Dryansky wrote. “Interested in slime mold art, and part of a project at Hampshire, so will join!”

A poet laureate, interested in slime mold? And slime mold art – what was that? I had to know.

My curiosity led me to meet up with Dryansky and the director of the Hampshire College Art Museum, Amy Halliday, who helped spearhead the project that launched at the museum February 8. At Hampshire, students are borrowing slime molds’ properties – “collaborating” with the molds, says Halliday – to ask probing questions about the human world we live in.

Slime molds, despite being called “mold,” aren’t fungi. Instead, they’re protists, unicellular creatures that have a nucleus but don’t form cell tissues the way animals, plants, or fungi do.

However, when under stress, these cells engage in remarkable collective behaviors. Individuals fuse into a mass of jellylike protoplasm that has a single cell wall around thousands or even millions of nuclei. This new collective organism, sometimes several feet in size, searches for food or collaborates to reproduce.

Most remarkably still, this mass without a central brain or nervous system shows primitive intelligence. For instance, slime mold dislikes cold, and will slow its growth in reaction. That’s no surprise – but what is startling is the plasm’s reaction if cold air is turned on at fixed intervals. The mold learns and remembers how long it takes between blasts and, at the next time interval, will slow its growth even if the cold air isn’t turned on.

Slime mold can also establish the most efficient travel routes to locations, for instance finding the shortest path to food in a maze. In one famous experiment, when researchers placed food at positions mimicking Tokyo and surrounding suburban rail stations, slime mold replicated the Tokyo railway network.

At Hampshire, students are using slime mold to try to map out food deserts in Springfield and the most efficient places to build new supermarkets. They’re exploring how immigrant populations might react to different shapes or types of border control.

“The idea,” says Halliday, is “that slime mold can provide policy recommendations that are not as biased as what we’re coming up with.”

All this is scientifically fascinating. But what I wanted to know was, what makes slime mold belong in an art museum?

“Slime mold is very beautiful. There’s all these fractal patterns,” Halliday says. “But it’s also a little bit about stretching the concept of what you might see in a gallery.”

People who work with slime mold argue that these organisms help us dissolve the boundaries of traditionally separated disciplines and conceptualize what science can bring to art, and art to science.

Numerous artists have glommed on to the possibilities of slime mold, among them British artist Heather Barnett, who spoke about her work in a 2014 TED talk. She creates time-lapse visual art with the molds.

Like the Hampshire students, Barnett considers her work a collaboration. Though the mold doesn’t “choose” to work with her, she can predict but not control the slime mold’s choices and behavior. The mold “has the final say in the creative process,” she said. “After all, it has its own aesthetics. These branching patterns that we see, we see across all forms and scales of nature.”

In one performance art piece, Barnett had people “become” slime mold. Tied together by yellow string, adult participants had to follow slime-mold rules, such as communicating without speaking, reshaping around obstacles, and operating without ego as one mass to search for their prize – beer.

Participants used the experience to discuss notions of intelligence, agency, and autonomy, such as how difficult it was to release their own personalities. Slime mold, Barnett said, “is biologically fascinating, it’s computationally fascinating, but it’s also a symbol, a way of engaging with ideas about community, collective behavior, cooperation.”

One of the most prominent artists inspired by slime mold was famed science fiction writer Octavia Butler, a pioneer both in her books’ innovations and as a black female writer.

On a single slip amid her papers, Butler documents the biology of slime mold and her interest in colony organisms. In the note, Butler writes, “We find true colony organisms rare and fascinating. Here, they are the exception. There, perhaps the rule.”

Butler’s “there,” notes Aimee Bahng, professor of gender and women’s studies at Pomona College, “is an elsewhere, a speculative space where someone – in this case perhaps the most-celebrated black feminist speculative fiction writer of all time – can begin to imagine an otherwise.”

In a podcast from a talk last June, Bahng argues that Butler used slime mold to create the alien Oankali in her Xenogenesis trilogy – tentacled creatures that have multiple genders, gather into clumps under stress, and communicate by chemistry with each other and with the walls and floor of their spaceship.

“Butler has drawn from what could be understood as slime mold’s queerest properties,” says Bahng. By using grammar that bends the boundaries of male, female, singular or plural, Butler “does not look to ‘figure out’ the slime mold. She seems excited to follow it off the script.”

These collective characteristics of slime mold are what make it artistically exciting, Halliday notes.

“Is it singular, is it plural, is it male, is it female? They’re relevant in this time when we have polarities everywhere, and slime molds seem to defy them, and by doing so, survive better,” Halliday says. “To think about it metaphorically and allegorically is really powerful.”

The Hampshire museum will host a “Plasmodium Symposium” on March 2, which will be open to the public and will serve as an opening to the exhibit. Attendees will be able to listen to talks by bio-artists Jonathon Keats and Julia Buntaine and even try their own slime mold experiment.

Dryansky, the poet laureate, will attend. Dryansky first grew interested in slime mold through her role as assistant director at Hampshire’s Culture, Brain, and Development Program. In her work there, she helps investigate how culture, society, and the brain’s biology influence one another – themes students and researchers can mimic and explore through slime mold.

But slime mold has also crept into her poetic work. The thinking prompted by slime mold among the interdisciplinary community of people interested in their biology and behavior mimics the metaphorical thinking of a poet, Dryansky said.

She hasn’t yet written an “Ode to Slime Mold” – but “pathways, patterns, all that is coming into my poems.”

“I just wrote a poem that’s about choice and desire and when one thing spills into another, and I swear,” says Dryansky, “it’s a slime mold poem.”

Although those who work with slime mold view these organisms as collaborators – even calling them “visiting scholars” at Hampshire – I found myself remembering that slime mold “collaborates” with us in a very limited sense. Slime mold doesn’t care about the questions we’ve posed. When we use slime mold to investigate human society, the answers we receive will always be inherently metaphorical, even allegorical, because whatever the parallels, slime molds aren’t us and want different things.

As Butler recognized, it’s perhaps in those allegories that some of slime molds’ richest possibilities lie for creatively, open-mindedly and radically transforming our own selves.

By naming them collaborators, however, rather than material, the artists remind us that slime molds are themselves before they’re tools for human use. In that, I found myself returning to the Facebook page where I started.

There, in a foreign universe of soil and rotten wood, a tiny ecosystem too often forgotten, the photos on Slime Mold Identification & Appreciation show these organisms at what I still think is their best – in vivid dots and sprays and blobs and towers, foraging and sharing in the task of decomposition, ready to be appreciated for what they most truly are.