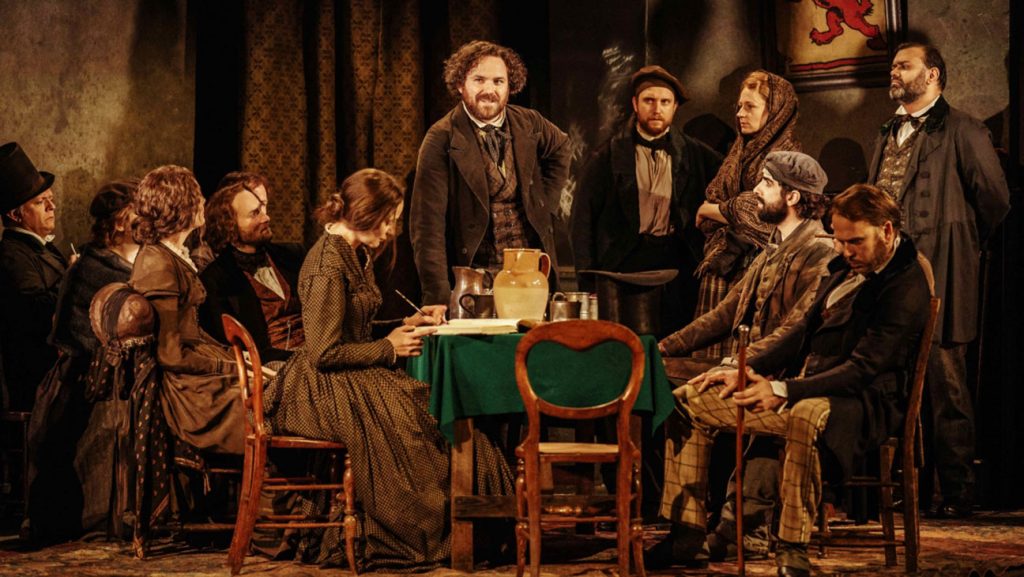 If, like me, you thought the National Theatre’s production of One Man, Two Guv’nors, either on NT Live or Broadway, was the funniest, wittiest farce you’ve ever seen (with Noises Off a close second), chances are you’ll enjoy Young Marx.

It’s on this weekend at Amherst Cinema, beamed in HD from London courtesy of NT Live.

Young Marx is the work of Richard Bean, who wrote 1M2G, and directed by Nicholas Hytner, who helmed that production and led the National for 12 years before striking out on his own to found a new theater. More on that below.

That previous Bean/Hytner collaboration harked back to London in the Fifties, and this one does, too – the 1850s. The Marx of the title is Karl, though here he tends more to Groucho than to the fierce scourge of capitalism we know. He’s played by Rory Kinnear, also bucking expectations – previous NT Live roles include Hamlet and Iago.

This is Marx before he became Marx. At age 32, he’s a ragged refugee from a Europe in turmoil, wanted on suspicion of terrorism, living in penury with an exasperated wife and four children in a grungy London flat. There are sparks of the world-shaker to come, but for now class struggle is taking a back seat to keeping one step ahead of cops and creditors while bedding the maid and sponging off his friend Friedrich Engels.

The play certainly echoes some of today’s harsh issues – war and displacement, immigration and asylum – but that’s subtext at most. In its heart, Young Marx is pure farce, its impudent wit punctuated by chases and pratfalls.

Marx’s banter with Engels suggests a vaudeville double act, and his present ambition is not to topple the state but to visit every pub in the West End. The dialogue is peppered with one-liners. Marx recalls his controversial wedding to a titled heiress as “a traditional Prussian affair: military uniforms, guard of honor, firing squad.”

This NT Live performance hails not from the National itself, but from a brand-new London stage, the Bridge Theatre. It was founded by Hynter and his NT colleague Nick Starr as a home for new work – although Young Marx, its debut offering, will be followed by Shakespeare’s Julius Caesar, coming to the Amherst screen in April.