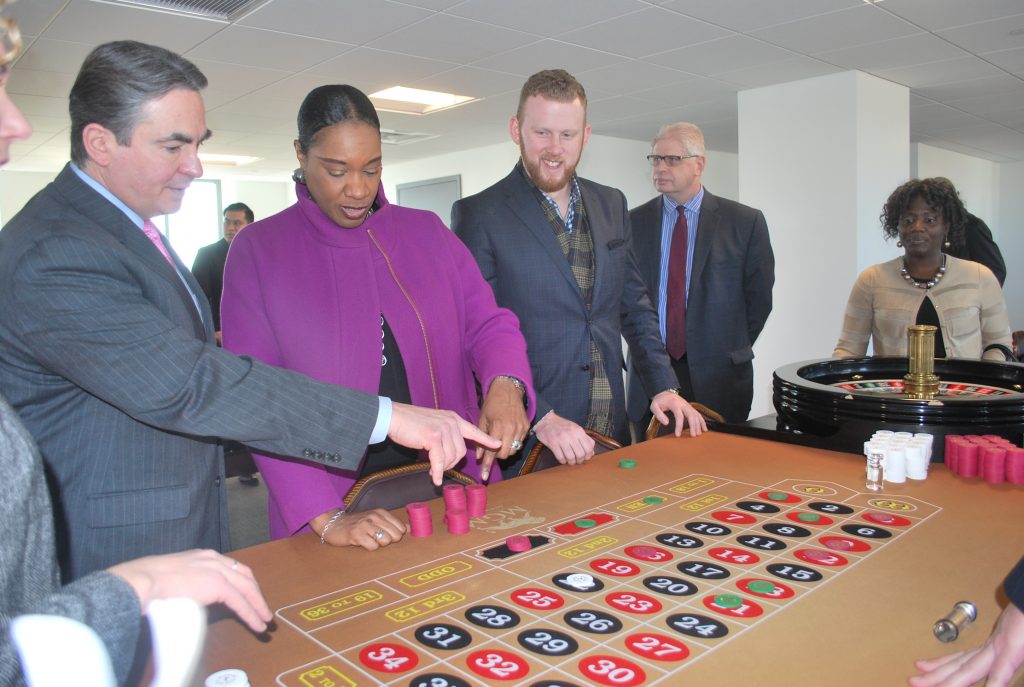 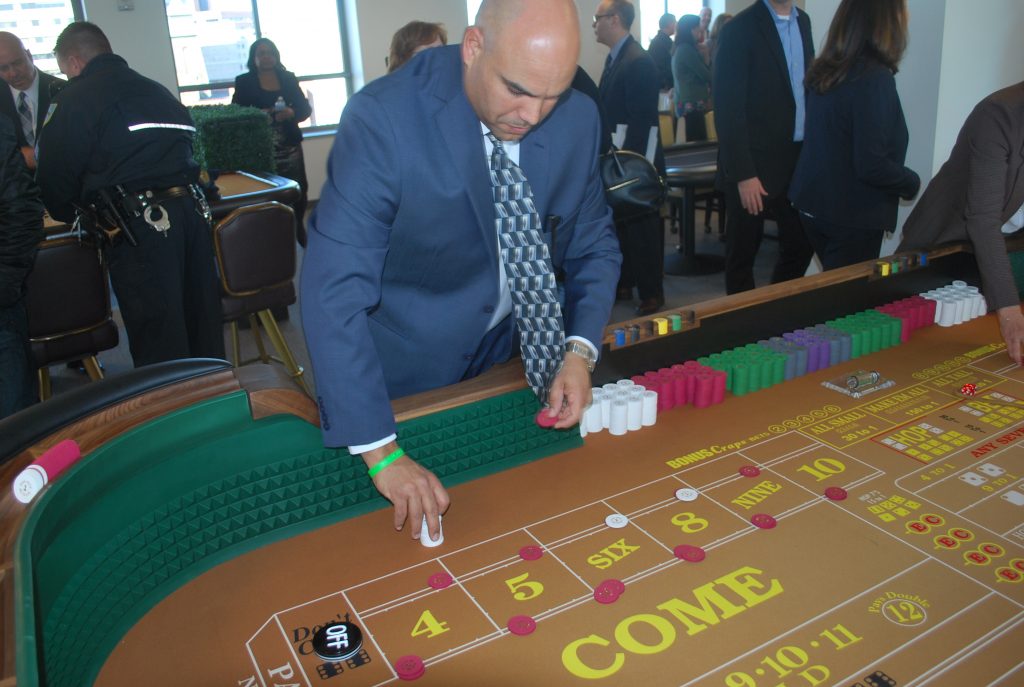 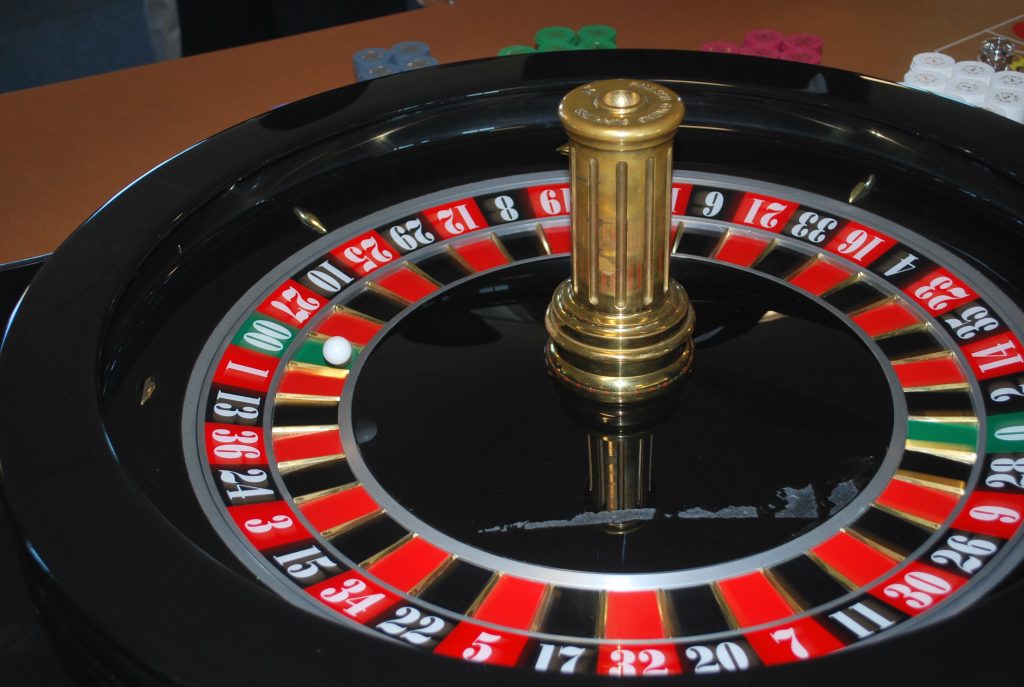 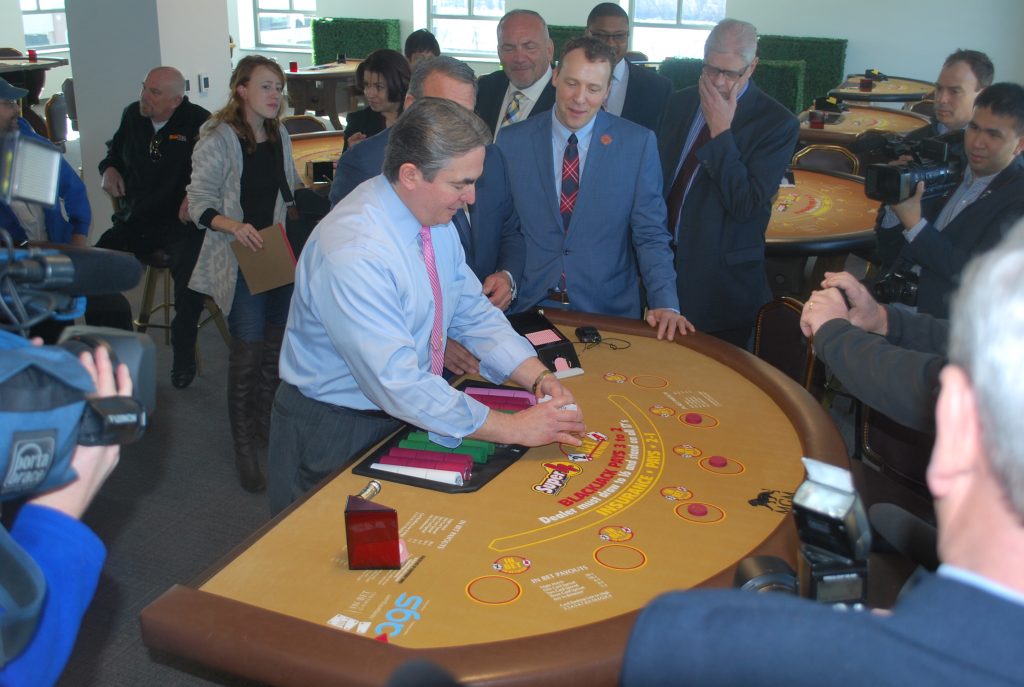 This summer or early fall, MGM’s $950 million resort-style casino is set to open in the heart of downtown Springfield, but before that happens the casino needs to hire 450 table game dealers, which is where the Massachusetts Casino Career Training Institute comes into play.

The institute is a partnership between Holyoke Community College (HCC) and Springfield Technical Community College (STCC) to provide hands-on experience from professionals in the gaming industry to become a dealer, whether that’s poker, roulette, craps, Midi baccarat, or blackjack.

The Massachusetts Casino Career Training Institute is located on the ninth floor of 95 State St. in Springfield and classes start on Feb. 26, but local media, including the Valley Advocate had a chance to take a sneak peek behind the velvet curtain, meeting instructors, MGM officials, and learning how to play craps.

Angel Rivera, table games instructor and supervisor for MGM, grew up in Holyoke before starting his career in the gaming industry 27 years ago in Atlantic City, New Jersey. 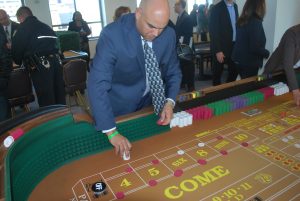 “There’s two main things that you need – customer service skills and entertainment skills,” he said. “If you get that you’re good to go.”

Rivera gave the Valley Advocate some hands-on experience when it comes to learning how to play craps. The most basic rule, he said is to place your bets on the pass line. If a dice roll is a 7 or 11, then the pass bet wins and the don’t pass bets lose. From there, the game becomes more complicated with riskier bets yielding higher rewards.

No formal education in gaming is required to enroll at the institute, the only thing you’d need is a high school diploma, Rivera said.

The gaming institute is furnished with 30 table games, 432 decks of cards, and eight sets of dice, according to a press release from MGM. Once participants complete the training program they have the chance to audition for a job at MGM Springfield.

“I myself have a high school diploma with some college and I moved up,” he said. “There’s plenty of room for advancement as long as you have a good attitude. You can move up to management.”

Gordon Absher, vice president of regional industry affairs for MGM, said 35 percent of the 450 table game dealers MGM is slated to hire would be people living in Western Massachusetts or about 157 people.

The cost for attending classes varies from $399 to $599 depending on the course. Roulette is $399, while craps is close to $600 to attend the course, according to the institute’s website. 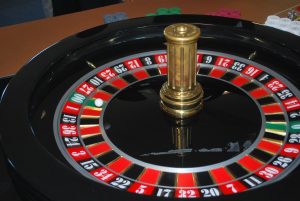 “If you are interested in being a part of the team and you need to go to school in order to do that, you can go to STCC and Holyoke Community College and attend the institute at 95 State Street,” Dixon said. “A year after you’ve joined MGM, we are going to be reimbursing that tuition that it took to take those two courses.”

Christina Royal, president of HCC, said the college partially develops curriculum and training to meet employer needs in the region and recognized the opportunity with the gaming school.

“What’s so exciting about this and what’s unique and innovative is the fact that you have two colleges partnering together to serve workforce needs in the region,” Royal said. “And that collaboration allows us to prepare for MGM’s success here.”

She described the institute as “contemporary education.”

“This is classroom is replicating their future employment and so being able to walk into a space like this and have a replica of what they’re going to be doing on the floor at MGM, I think, is a tremendous training opportunity.”

Springfield Mayor Domenic Sarno said he thinks MGM is renowned for having it’s employees scale the corporate ladder, including Robert Westerfield, who started as a dealer and is now vice president of table games for MGM. 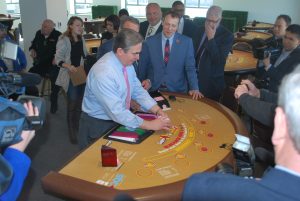 “The whole thing here is jobs, jobs, and more jobs,” Sarno said. “I’m happy with the continued belief and investment of MGM in the city of Springfield in Western Massachusetts.”