Valley Show Girl: The Brian and Vicky Show at 7B’s in Westfield 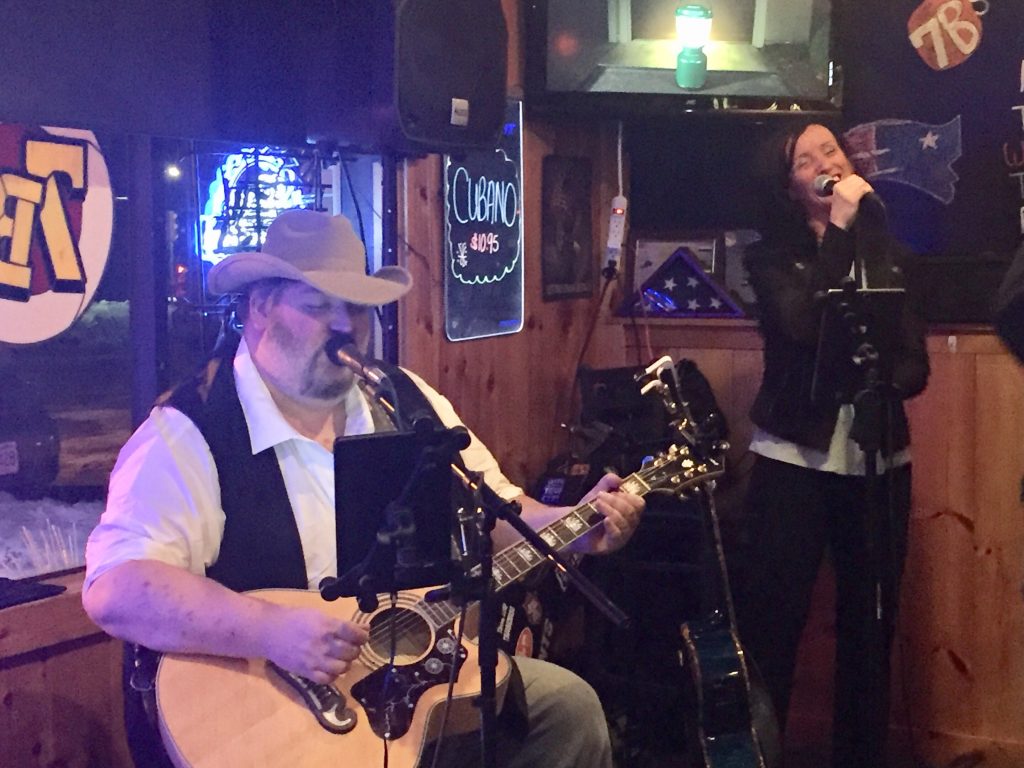 With that typical New England ice storm still fresh in the air, I had Vanilla Ice’s Ice Ice Baby in my head all day. Walking into 7B’s Bar and Grill in Westfield to hear the classic Johnny Cash tune The Ballad of Jesse James was all it took … poof! be gone Ice Ice Baby! 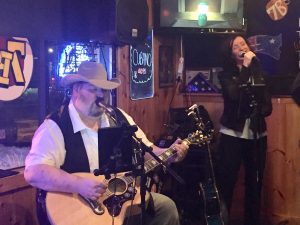 Set up in the corner, performing classic and new country tunes are Vicky St. Pierre and Brian Chicoine. If you’re a Johnny Cash and/or June Carter Cash fan, well, unfortunately, you’ll never have a chance to see them. However, the next best thing is right here in the Valley, and that is the Brian and Vicky Show. Brian’s voice is strong and empowering, and Vicky’s is delicate with range. The duo also performs Johnny Cash tributes from time to time, mainly for veteran benefits throughout the Valley. They dress like the famous country couple, and if you close your eyes and listen, their music will take you back in time.

The horseshoe shaped bar, where I’m planted, is full. The tables are also full for a Thursday night. I’m cursing myself for having a full belly when I see an order of nachos delivered to a lucky diner. Everyone is casually drinking and having conversations, but Brian and Vicky’s strong vocals overpower the noise. Without a doubt, 7B’s Bar and Grill is a joint where regulars meet up for drinks and snacks to socialize after work.

Ruby, Don’t Take Your Love to Town, by Kenny Rogers, is played and my heart skips a beat. Such a classic. Have you heard The Killers’ version of that song? Well that version was my second fave until I heard Brian and Vicky’s — especially when Brian spits out the ending lyrics, “Oh Ruby, for God’s sake turn around.” Swoon. But then I catch a glimpse of the dead deer on a pickup truck on the TV above Vicky’s head. Hmmm.

I hear the first few notes to that ultra popular Nancy Sinatra track These Boots Are Made For Walking blast through the speakers and I think, “Finally, someone’s playing my theme song!”

About halfway through the set, Brian takes a break and sits down next to me at the bar. He says his vocals were off because he’s sick. I roll my eyes and tell him he’s as good as always. Vicky picks up the guitar and performs the most beautiful version of America’s Horse With No Name I’ve ever heard. You know the song. Again, swoon. Then they play Dolly Parton’s Jolene. The most beautifully tragic song of all time. Every rendition of it, including Jack White’s (my imaginary husband) I just absolutely adore. To lighten the mood, they follow it with Billy Ray Cyrus’ Achy Breaky Heart and for the first time that night, people are dancing.

My musical tastes are so scattered I have officially pegged myself as a musical schizophrenic. Growing up, my dad and step mom listened to classic rock — Pink Floyd, Led Zeppelin, The Doors, Heart, etc. My mother had a touch of 80s synth pop with Tears for Fears, Blondie, and then she’d slip in some good ‘ol country. So hearing tunes by Patty Loveless, Garth Brooks and Dwight Yoakam brings me back to the ‘90s cassette tape boombox on top of the fridge in the kitchen when I was a kid. I love how music does that; it’s a timeless memory boost.

Just like that, towards the end of the night, they switch the vibe a bit. Brian and Vicky perform Alanis Morissette’s Hand in My Pocket with all that lovely angry female angst, but brought down a notch. Vicky even busts out the harmonica at the end. Then as if that wasn’t enough nostalgia to fill my heart, Brian acoustically perfects the riot grrl anthem Shitlist by L7. I may be the only one apart from him who knows that song, but mission accomplished, the night is a musical triumph.