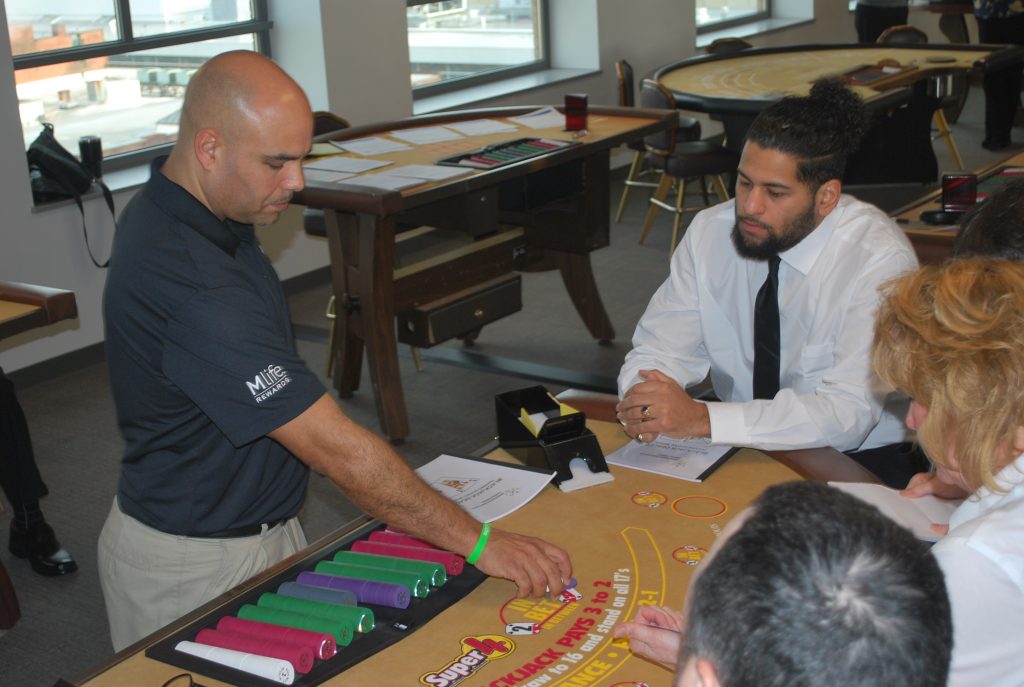 Angel Rivera, a table games instructor and supervisor for MGM Springfield, held a stack of 20 chips, or as what they’re referred to in the gaming industry as, “checks.” and told more than half a dozen students on Feb. 26, the first ever day of classes at the Massachusetts Casino Career Training Institute, that by the end of their six-week blackjack course they’d be able to count 20 checks using their muscle memory. Welcome to gaming school.

“Blackjack is a six-week course,” he said. “Today, we’re just pretty much going over the basics — going over blackjack terminology, show them how to deal with the chips and work with their hands.” 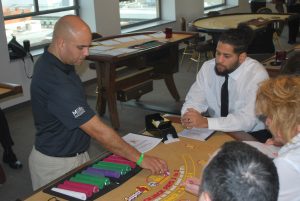 The $950 million resort style MGM Springfield Casino will open its doors in September, but before that can happen the company needs to hire 450 dealers for poker, roulette, blackjack, and Midi baccarat, 35 percent of whom will be Springfield residents,  Marikate Murren, head of human resources for MGM Springfield, said.

When asked how many students MGM Springfield would likely hire, she replied, “We want as many people going through this school as possible. We’ll have on call, part-time, and full-time positions, so we’ll need a lot of headcount to make sure that we can adequately staff the tables. If you’re a city of Springfield resident looking to do something different, we would encourage you to come into school.”

The blackjack course at the gaming institute requires a total of 130 training hours as well as prerequisites such as a good attitude, basic math skills and the ability to pass a criminal background check, according to the institute’s website. The cost of that introductory course is $399.

Diane Garvey, a resident of Wilbraham who has been in working in the sales industry for more than a decade, decided to enroll at the gaming school because she was looking for a change in her career path.

“I was displaced from my previous job due to reorganization and a great company like MGM came up and it’s something new and different,” she said. “I’ll be able to interact with a lot of people. It sounds exciting to me.”

Nicholas Ruell, a 21-year-old Westfield resident who currently works at Subway, said becoming a blackjack dealer is more appealing to him than working in the food service industry.

“I’ve been in food service for a while and I am not really getting anywhere with the several other jobs that I had with food service, whether it be as cook or a manager or assistant manager or shift supervisor in the past,” he said. “So I decided to go a new route and this was a good opportunity for me.”

Ruell said he’s optimistic that the casino would bring jobs to Springfield residents and attract visitors to the city.

Ray Caporale, a 71-year-old lifelong resident of Springfield, has always wanted to work in the gaming industry, but never took the chance when he was younger.

He said he’s been in favor of the casino since the first day it was announced.

“Are you kidding me? I would have carried the steel into town if they needed it,” Caporale said. “I went to several meetings in its early days with the Gaming Commission and I felt that with the 14 and a half acres that they’re sitting on, if they weren’t here, about this time it would have looked like some remote area of Texas with a tumbleweed running through it. This 14 and a half acres this casino sits on was my backyard growing up. I know what devastation the tornado did and nobody would have fixed it. It would have been here for years.”